Ephriam S. Wells Was “Rough on Rats” And People?

R-r-rats!  Rats! Rats!
Rough on Rats,
Hang your dogs and drown your cats;
We give a plan for every man,
To clear his house with “Rough on Rats.”

Recently my doctor suggested that I begin a regimen of a blood thinner called “warfarin.”  When I suggested that this medicine began existence as a rat poison, he readily agreed.  That encounter got me thinking about an artifact I recently bought at a bottle show, a small metal box containing an earlier, very popular American vermin poison called “Rough on Rats.” 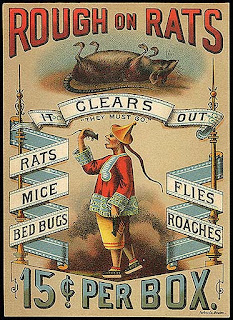 Shown here, the box lid is a colorful celluloid picture of a Chinese gentleman with  a long pigtail, a cooly hat, and an embroidered tunic who apparently is about to eat a rat while in his other hand he holds a second rat, apparently also about to be consumed.   The racist image perpetuated a long-held belief among some Americans that the Chinese on a regular basis ate live rats as a snack.  The Chinese also appeared in “Rough on Rats” advertising.

Trading on anti-Chinese prejudice in the U.S., however, was not the primary sin of Ephriam S. Wells, a New Jersey druggist who invented “Rough on Rats.”  It was his seeming indifference to the other effects of his product that soon became associated with a significant increase in murders and suicides by poisoning.  As Professor Loren Gatch has described:  “Thanks to Wells, Americans were poisoning each other in increasingly large numbers.  Newspapers of the era were littered with lurid accounts of the despondent and depraved.”

Unlike Europe and other European countries, the United States had no national poison control laws and state regulation often was weak and inconsistent during the late 1800s.  Despite “Rough on Rats” being largely white arsenic with some fillers, Wells was able to able to elude state laws that outlawed the sale of poisons to minors or required registration when sold to adults by marketing his arsenic under its trade name.  Nowhere in its ads or packaging were there warning to humans. 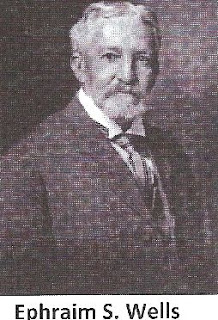 “If Wells felt any ethical qualms about the abuse of his rat poison, he never recorded them,”  noted Prof. Gatch.  Rather he concentrated his effort on merchandising the product through humorous and often colorful magazine ads and trade cards.  “I desire to state,”  Wells announced, “that I have written all my own advertisements and designed all my own cuts and illustrations without a single exception.”  The lighthearted treatment of the druggist’s nostrum also acted to deflect concern among the public about its lethal qualities.  Above, for example, are six variously colored cats all gazing in astonishment at a can of “Rough on Rats.”  The caption reads:  “Our occupation gone — Rough on Rats Did it.” 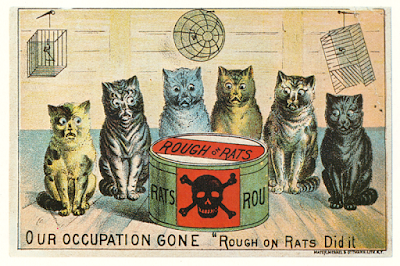 What more amusing subject for an ad could there be than a bespectacled rat with     pointer who is describing to smaller rats the dangers of Wells’ product.  “This is what killed your poor father.  Shun it!” the ad reads.  Avoid anything containing it throughout your future useful careers.  We older heads object to its special roughness.” 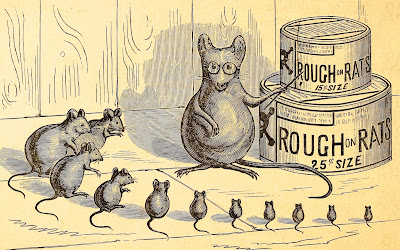 A similar card, shown below,  includes the other pests “Rough on Rats” was to eliminate, including gophers, chipmunks, mice, flies, roaches, ants and even down to bed bugs. 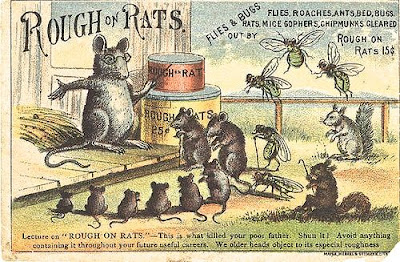 Still another colorful Wells trade card depicted a rat being chased in turn by a cat, a dog, a boy with a hatchet, a man with a whiskey bottle, and a woman with a broom.   The druggist took advantage of this card to market other proprietary medicines he had invented, including “Well’s Health Reserve,” and “Mother Swan’s Worm Syrup.  Wells also featured a series of “Rough on” medications to remedy toothaches, itches, corns and even piles (hemorrhoids). 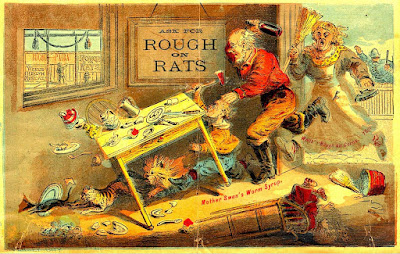 In 1982 Wells took the additional step of publicizing his rat poison by commissioning sheet music to sing its praises, anticipating the advertising jingle.  The song was created by two well-known music men of the time. W. A. Boston wrote the lyrics including the chorus, repeated several times, that opens this post.  The music, by Juniper Jones, was suggested as suitable for dancing. 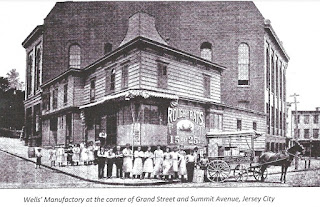 Working from his factory located at the corner of Grand Street and Summit Avenue in Jersey City, Wells concentrated on selling “Rough on Rats” and his other products full time through mail order sales, with extravagant spending on advertising in the United States and other English speaking countries. It paid off.  Over the next twelve years his profits exceeded $2 million, equivalent to $50 million today, from individual sales of items costing ten to twenty-five cents.  Shown here is a company check that features the rat poison and various other Wells products.

Beginning as a lowly drug store clerk and often on the brink of bankruptcy, Well’s concoction of a powder that was odorless and tasteless to its rodent victims but deadly, eventually brought him fame and fortune — even though “Rough on Rats,”  a name suggested by his wife, too frequently was administered to humans.  In the last decade of his life the wealthy Wells retired to his summer house in Glenmoore, New Jersey, living like a country squire and raising horses. 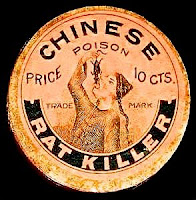 Wells died of natural causes in March 1913, leaving a substantial estate.   The “Rough on Rats” brand continued to be sold into the 1950s.  Like other successful nostrums, it attracted copycats, one of them perpetuating the racist Chinese image.

Note:   Thanks to Prof. Loren Gatch for much of the information provided in this post as well as for a number of the images shown here.  Prof. Gatch was associated with the University of Oklahoma when he published an article on Wells and his anti-Chinese bias.

Posted by Jack Sullivan at 6:31 AM