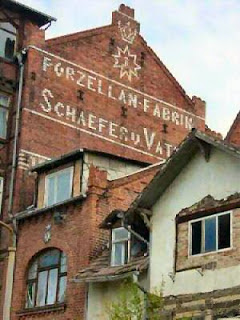 When Gustav Schafer and Guenther Vater founded the their ceramics factory in Thuringa, Germany in 1890, their objective was to make high quality porcelain.  Among the wares flowing from their pottery, shown right, were a wide variety of figural bottles, each containing several swallows of liquor and meant as giveaways by saloons and other drinking establishments.  Because the Christmas season was a prime time for such gift-giving,  a number of these bottles,  sometime called “nips,” had a holiday theme.

Initially these items were produced and sold primarily in Germany and Austria, but about 1910 the U.S. department store giant, Sears Roebuck & Co., began to import and distribute nationwide Schafer & Vater pottery, including the Christmas nips.  Thus they are found with greetings in both German and English. 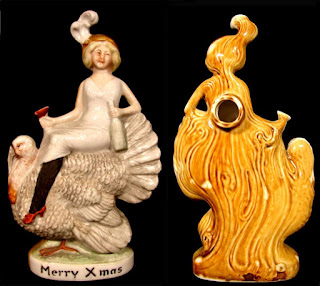 One of the most artful was a figural of a woman in a white evening gown and wearing a feathered boa.  Somewhat inexplicably, she is riding a turkey while carrying a bottle of liquor in one hand and a glass in the other.  The base reads:  “Merry Xmas.”  The back reveals an opening through which the liquor may be accessed and a swirling molasses look to the glaze.  A paper label, now long gone, was pasted there to remind the imbiber of the originator of the gift.

Frequently the partners would produce similar nips for both German and American audiences.  An example is a figure of a “Father Christmas” aka Santa Claus carrying both a sack (presumably of toys) and a Christmas tree.  In his right hand Santa appears to be holding a liquor bottle, a feature that characterizes most of these Schafer & Vater items.  The German model greets “Fröhe Weihnachten;”  the American model, “Merry Christmas.”

The American market for these holiday nips must have proved very profitable for the Thuringan partners whose ceramics factory had expanded to three kilns and  a workforce of 200 by 1913.  They became known for their skill with two glazes, a light blue one applied directly to the ceramic object, as well as a honey brown that often covered the backs.  The two Santa figures shown here illustrate the use of those glazes.

A familiar form for Schafer & Vater figural nips was a figure imposed on a flagon that bore a small handle that could be used to hoist the bottle to the lips.  Shown here are two Santas, one in the blue glaze made for the German market and a look-alike in multiple colors made for the U.S.  Both have a small doll-like figure at the base and a bottle labeled “Prosit” in hand.  It took little imagination to understand that something spiritous was inside. 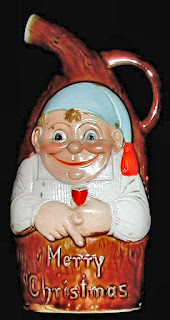 Schafer & Vater obviously had their own ideas of how Americans celebrated the holiday season.  Although drinking had its place in all the figurals, activities differed.  Shown here is a jolly sort with a night cap, possibly straight out of “The Night Before Christmas,” whose red cheek and nose indicate more than a passing acquaintance with alcohol.  In fact he holds a glass filled with a red cocktail or liqueur in his hand while pointing at “Merry Christmas.” 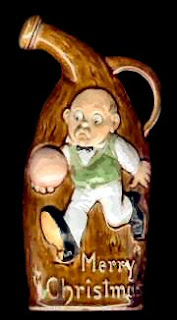 Someone at the factory must have thought Americans go bowling on Christmas, given the figure shown here.  (In truth, I have bowled on the day after.)  On the base this nip likely would have a backstamp impressed with a crown above an “R” in a star.  Sometimes “Made in Germany” was stamped in black.  That said, Schafer & Vater items can be found without any stamp or reference to their origin.  They must be identified by their appearance. 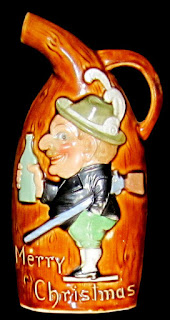 The idea of going hunting on Christmas was not without foundation.  Many in Northern Wisconsin, for example, make it an annual event.  They attend midnight church services and awake early to hunt. While carrying along a bottle of liquor, as this sharpshooter is doing, is not unknown in those cold climes it is discouraged by the authorities.

Why a pig would be chosen as a symbol of the holiday is somewhat obscure.  My mother of German ancestry often cooked a pork roast for our Christmas dinner and swine are frequently found in German art and artifacts.  This pig looks extremely uncomfortable, perhaps indicating foreknowledge of its fate on someone’s dinner table, perhaps with an apple in its mouth.  A second pig, shown below, seems to be smiling — perhaps spared this year.  Note that here the brown glaze on the back has been made to resemble wood grain. 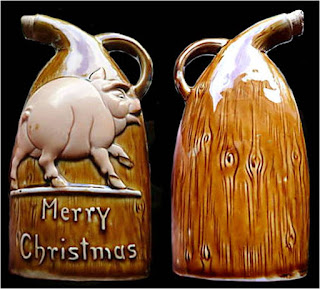 There they are — a dozen examples of the legacy of Schafer & Vater.  The firm continued production through two World Wars but its position in former Communist East Germany limited its markets in the U.S. and elsewhere and the firm closed in 1962.  Reports are that in 1972 the East German government assumed full control of the vacant factory and company records and moulds were  destroyed.  Moreover, in post-Prohibition United States it was illegal for drinking establishments to give such items away.  Nevertheless, we can still enjoy Schafer & Vader nips as expressions of the joys of drinking at Christmas — or anytime.  They are treasured relics of the 20th Century.


Posted by Jack Sullivan at 6:55 AM No comments: