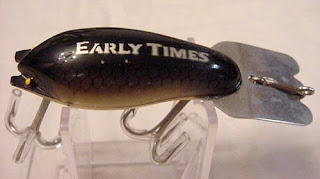 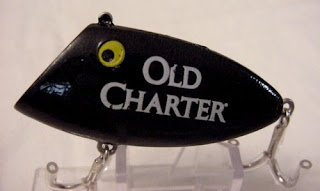 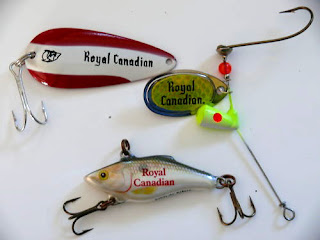 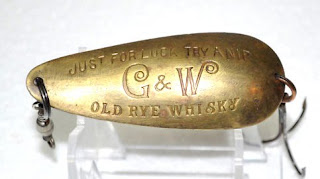 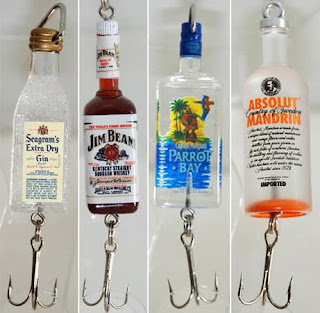 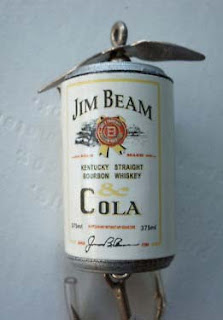 One of the more imaginative ways that liquor companies have employed to advertise their products is by giving away fishing lures. It makes sense. People who fish -- particularly the men -- are also likely to imbibe alcoholic beverages from time to time, sometimes even while fishing. Who, for example, would embark on a day long day of fishing without at least a six pack in view?

Recognizing this market, distillers have issued a number of lures over the years, ranging from the practical to the absurd. Among the former is the crippled minnow lure from Early Times Bourbon. A classic, vintage shape, it is a medium-running lure, designed to hook anything from a muskie to a bass.

One of the earliest brand names in American whiskey history, Early Times Bourbon was founded by John H. Beam, uncle to the famous Jim Beam, near Bardstown, Kentucky in 1860. The distillery changed hands several times before Prohibition. After Repeal in 1934 Brown-Foreman Distillers bought the entire stock and the brand name. The lure probably dates from the 1950s when Early Times was the best-selling bourbon in the country.

The Old Charter lure is another example of a classic American fishing plug, sold in the past under various names, including “Pico Bayou” and “Boogie Perch Lure.” At 2 and 1/2 inches long and deep-running, however, it was meant for larger fish than perch and probably had its greatest use in angling for large mouth bass.

Old Charter is another historic whiskey brand name. Adam and Ben Chapeze, of French descent, first began distilling in 1867 at a Kentucky site called Chapeze Station. It took them another seven years to decide to call their liquor Old Charter Bourbon. The brand changed owners several times in the 1800s and ended up with Wright & Taylor before Prohibition. Subsequently the whiskey has had several ownership, including Schenley Industries and United Distillers.

With sport fishing a major industry in their homeland, Canadian distillers have been major contributors to whiskey lures. Shown here are three baits that were issued by Royal Canadian Whiskey. They include, from top, a bass spoon, a spinner, and a crippled minnow. Even today no respectable tackle box should be with a version of each.

Royal Canadian was a brand from the Hiram Walker family of whisky (as the Canadians spell it). Described as medium-bodied and advertised as “rich and rare,” this blend had considerable success in the U.S. and foreign markets until production ceased about 1995.

Bass spoons were a favorite distillery giveaway because the company name could easily be accommodated on the back. Gooderham and Worts, a Canadian firm with worldwide liquor interests, provided a golden lure with the slogan “Just for Luck Try a Nip” of its Old Rye. The American-made Ezra Brooks Bourbon provided a red and black bass spoon to its Isaac Walton adherents. To my knowledge, both whiskeys are still being made. Several years ago I witnessed fifths of Ezra Brooks being bottled and cased at the Heaven Hill Distillery in Bardstown.

From serious fishing equipment, we move to the semi-ridiculous. Four liquor companies issued items with the shape and label of their bottles. As my father often said: “Some lures catch more fishermen than fish.” The examples shown here would seem to bear out that insight.

The final whiskey lure is from Jim Beam and is thoroughly absurd. It features a 1 and 1/2 inch can of Kentucky Straight Bourbon Whiskey Cola. with a spinner on top. This probably should hang from a Christmas tree rather than from the end of a spinning rod. Beam, named after the famous Jim, is probably the world’s best known bourbon. The distillery traces its origins to Beam’s grandfather who sold his first barrel of whiskey in 1795.

Whiskey-issued lures were, in retrospect, a useful advertising gimmick for distillers. Some had practical uses; others were meant to amuse one’s fishing buddies. All of them probably should bear a warning label: “When you reach for that nip, take care the rowboat doesn’t tip.”
Posted by Jack Sullivan at 5:31 AM 5 comments:

Heinrich Schlitt and the Family Stein 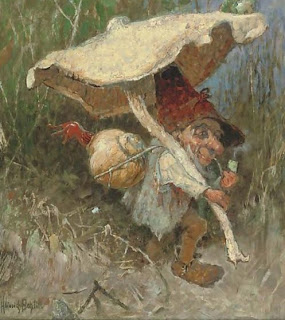 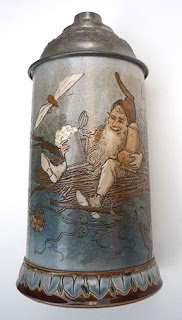 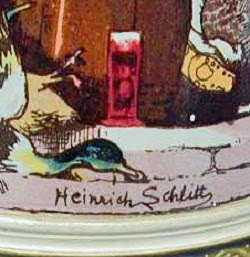 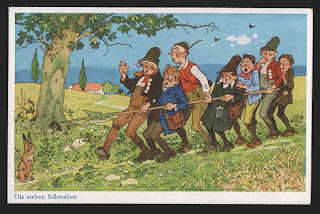 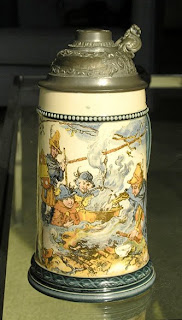 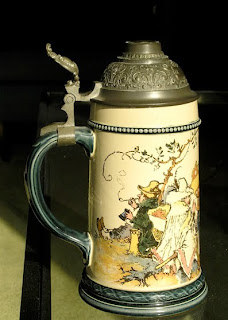 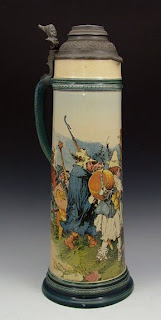 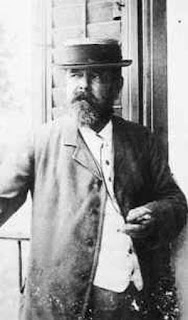 The picture of the gnome shown here demonstrates the artistry of an almost forgotten German artist whose major legacy was decorating drinking vessels, as I found out recently in researching a beer stein that has been in my family for more than 60 years.

The artist was Heinrich Schlitt, who was born in 1849 in Biebrich-Mosbach, now part of the German state of Hesse. The son of a civil servant, Schlitt was drawn to art from his youth. In the early 1870’s his career took him to Munich, the capital of Bavaria where he found considerable success. Because of his attraction to humorous and fanciful topics, his paintings and illustrations were popular. He frequently featured German folk characters such as fairies and gnomes.

In the late 1800s Schlitt joined the ceramics firm of Villeroy and Boch in Mettlach, Germany, where he produced many designs that come to life as the illustrations for beer steins. His signature graces many of the company steins of that era.

Enter my family. Sometime in the 1940s my father did favors for a neighbor who repaid him by a gift of a beer stein. It was prominently displayed in our home for almost 40 years. Upon my father’s death, I inherited it. Only relatively recently, however, did I attempt to establish its provenance by writing the Villeroy and Boch museum in Germany.

The curator, Ester Schneider, wrote me documenting that the stein dates from about 1901 and was designed by Schlitt, whose signature appears on the vessel. Shown here from two angles, the lidded stein depicts the Grimm Brother’s folk tale of the Seven Swabians. These lads were the German equivalent of “Dumb and Dumber.”

Frequently depicted by German artists, as in this postcard view, the Seven Swabians decided “to travel throughout the world seeking adventure and performing great deeds,” according to the Grimms. For this crusade the company obtained a sword long enough that all seven could take hold of it at once. Encountering a rabbit on their journey all were very afraid that it was a monster but gripped the weapon and charged. To their relief, the rabbit ran away.

On the family stein, however, Schlitt depicts the Swabians as older and preparing to eat a rabbit for dinner. Over a boiling pot, the long spear holds a lantern to light the scene for the cooks as the seven settle in for an evening meal. The artist returned to the Swabian theme frequently in his designs for Villeroy and Boch ceramics, including very tall drinking beer steins.

As he grew older Schlitt, described by contemporaries as “a kindly wizard” and “jolly and full of fun,’” became increasingly lonely, eccentric and depressive. His photograph shown here, said to be only one of two known to exist, shows a man who seems distinctly unhappy at being in the lens. Schlitt died in 1923 and was buried, together with other honored Munich artists, in the Waldenfriedhof Cemetery.

Today Heinrich Schlitt’s drawings, oils, watercolors and murals receive occasional notice in the European art world. He is best known and remembered, it appears, by collectors of beer steins worldwide. As one American writer has expressed it, the artist is cherished for his “...wizened visages of avaricious gnomes, mellowed by just a tinge of wry good humor; the anthropomorphic treatment of beer-mugs and pretzels, sausages and steins, devils and playing cards, towers and trees.”

Stein collectors are said to greet the name “Heinrich Schlitt” with shouts of ecstasy. If that is an exaggerated commentary, they have certainly elevated the prices on his Villeroy and Boch designs. I am looking at the Schlitt Swabian stein these days with new appreciation and a resolution to keep it in the family.
Posted by Jack Sullivan at 8:23 AM No comments: