Among the manufacturing and service industries regularly presenting the public with giveaway advertising items like paperweights and pocket mirrors, the shoe industry of the early 20th Century stands out as a major participant.  On September 28, 2012, I presented on this blog a group of 10 paperweights under the title “Shoes Preserved Under Glass.”   Herein is presented eleven advertising pocket mirrors — all related to the footwear industry.   They present the fashion in  the shoes of the time as well as the methods of merchandising.  Just as important they point up major changes taking place in shoe manufacturing. 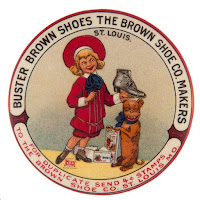 In 1904, a cartoonist named Richard Outcault went to the St. Louis World’s Fair where he hoped to sell the rights to a pair of comic page characters he had created known as Buster Brown and his dog, Tige.  Among buyers was a St. Louis shoe manufacturer named George Warren Brown.  For the princely sum of $200 he bought the rights to feature the pair in his marketing and never looked back.  In ensuing years Buster and Tige became closely identified with Brown’s shoes, as on the pocket mirror shown here.  By 1958, largely through creative advertising, the Buster Brown line had become the largest brand of footwear for children. 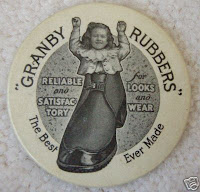 Contrast that pocket mirror with a similar item for Granby Rubbers.  This mirror is in black and white with a photo of a young girl seemingly stuffed into an overshoe, a clumsy image.  The Granby Rubber Co. was a Canadian outfit founded by Samuel Henderson Campbell Miner in 1882 to manufacture rubber clothing items, including “…Rubbers for city or country and Overshoes for country.”  His factory, one that reputedly made 5,000 to 6,000 pairs of shoes daily, was located in Grandy said to be Miner’s “… town financially and sentimentally.”  The boss was mayor for more than two decades.

A similarly conservative figure was August Schreiner of Rochester, New York, who advertised the “The Snow Shoe” on a pocket mirror.   A shoe and boot trade publication in 1916 said of him:  “Mr. Schreiner is one of a very few of our old shoemen who continue to make custom shoes.  This, he says, obliges his older customers and he does quite a brisk business in this line.”  In less than three years, however, Schreiner was advertising in the local newspaper the equivalent of a bankruptcy sale, saying”  “A force of circumstances, which none could foresee, prompts this action.” 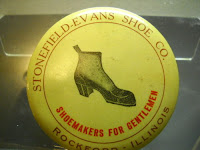 While Schriener was harking back to the days of the village shoemaker where footwear was made customer by customer, industrialization had long since taken shoe manufacturing out of the workshop and into the factory.  Even then an outfit like the Stonefield-Evans Shoe Company of Rockford, Illinois, was insisting that it employed only “highly skilled tradesmen.”  Acquired by Sam Stonefield, who had started in work in a shoe factory when he was ten years old, the factory made only men’s shoes employing 140 of those skilled cobblers, keeping output at a modest 600 pairs daily. 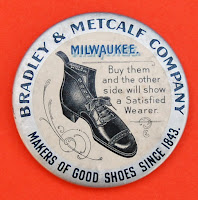 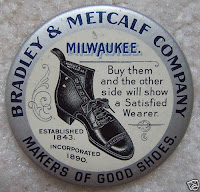 By contrast, the Bradley & Metcalf Company of Milwaukee, one of the largest boot and shoe manufacturers in the Northwest, even as early as 1870 was replacing those skilled workers.  A company foreman told a local newspaper that of the 450 men now employed in the establishment, “Perhaps not more than ten were sufficiently skilled to be of any service ten or fifteen years ago.”  The Bradley & Metcalf spokesman added:  “The simple fact proved to be that the division of labor  — one single and simple operation being assigned to each class of workmen — and the introduction of machinery has enabled manufacturers to substitute unskilled for skilled labor.”   Indeed, in some shoe factories the workforce might include child labor.

Conditions in shoe factories were such to spur the development of a strong and militant labor union for shoemakers by 1889, evolving to become the Boot and Shoe Worker Union (BSWU) of the AFL.   Regarded as a “radical” union in its early days, the BSWU was formed to establish uniform wages for the same class of work, including equal pay for women, and to abolish child, convict, and contract (low paying home industry) labor.   The union was international, including French-speaking Canadian workers.

The presence of a labor union made shoe manufacturers increasingly concerned about keeping their workers happy.  Among them was Thomas Gustave Plant, a French-Canadian immigrant who made his fortune manufacturing footwear under the Queen Quality Shoes label.  His largest shoe factory was in Roxbury (now Jamaica Plain) Massachusetts and self-proclaimed to be the largest shoe factory in the world.  Plant provided numerous innovations and amenities for his employees,  including a company park where they could have lunch and recreate.  And not just another park.  Completed in 1913, the facility was designed by Frederick Law Olmsted Jr., park architect son of the man who developed Central Park in New York City. 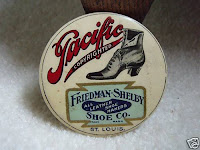 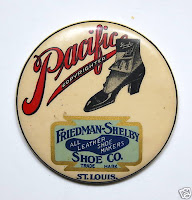 Despite occasional labor unrest, communities were eager to have shoe factories locate within their boundaries.  The Friedman-Shelby Shoe Co. of St. Louis in 1907  built a factory in Kirksville, a community of about 20,000 in North Central Missouri but only after the town had furnished a free site, free water for five years and tossed in a bonus of $60,000, equivalent to almost $1.5 million today.  For its investment Kirksville secured employment for 300 workers who produced 1,800 to 2,000 pairs of shoes daily.  Friedman-Shelby sold the 60 by 300 foot four story factory to another shoe company in 1916.  Reflecting consolidation occurring in the industry, Florsheim Shoe Company eventually bought it and shut it in 1973. 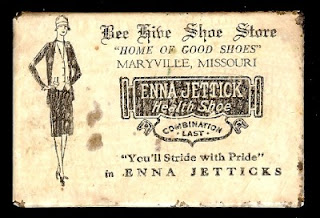 The “Enna Jettick” shoe brings us back to the wardrobe changes that were affecting the industry.  As shirts got shorter and shorter, women were giving more attention to make fashion statements with their shoes and investing more money in them.  The company behind this brand was Dunn & McCarthy, a shoe manufacturer of Auburn, New York, in business since 1867.  The Enna Jettick line was issued during the flapper era of the 1920s and, true to the zany antics of that era, advertised with its own blimp airship.  In Auburn, the company bought a park on the banks of Cayuga Lake, installed a merry-go-round, and in 1930 named it Enna Jettick Park.

The face of each of these pocket mirrors shows us the image that the advertiser chose in order to sell his products.  Behind each mirror is a story of an industry in flux virtually from the end of the Civil War until the 1920s as the transition from village cobbler to industrialized manufacturing occurred and changed forever the way shoes are made and merchandised.

Note:  For anyone interested in the origins of the celluloid-backed pocket mirror as an advertising giveaway, I have treated that subject in a post of July 4, 2009.

Posted by Jack Sullivan at 2:35 PM