A Fig for Your Health!

Around the end of the 19th Century a series of hucksters, promising remedies for various ailments,  centered on the lowly fig as an elixir of great potency and healing.   Ironically, there is an traditional English saying about not giving or caring a fig about something.  The Oxford English Dictionary translates “fig” in that context as something “small, valueless or contemptible.”

Another, even older book, however, carries a different story. In the Old Testament of the Bible King Hezekiah, shown here, was very sick.  Apparently stricken with boils, he seemed near unto death and prayed for deliverance.  The answer came in the shape of the Prophet Isaiah who told Hezekiah to apply a bunch of fresh figs to his sores.  He complied and was completely healed.

That was the fig story captured by the nostrum peddlers.  Their sales pitch had nothing to do with boils,  but largely with constipation and other ills.  Figs are known to have a mild laxative effect and it was that quality that spawned the widespread sale of fig remedies.  Among the most notable was

the “Syrup of Figs” produced by the California Fig Syrup Co. of San Francisco.  It came in labeled, embossed bottles that sold in drug stories across America at the not inconsiderable cost of a half dollar.

As shown here, this company advertised widely in national magazines, frequently featuring comely women to illustrate its product.   It claimed offices in Louisville, Kentucky;  New York City, and London, England.  Another advertising method was offering colorful lithographed tin signs to pharmacies stocking the syrup, again featuring a young lovely.  The California Fig Syrup Co. was not without its imitators.   Although figs are not native to Wisconsin, the Andrews Drug and Chemical Co. of Drillion had its own “Syrup of Figs.”  Its product claimed to cure “many ills arising from an weak or inactive condition of the stomach, bowels, kidneys and liver.”

In the wake of the Food and Drugs Act of 1906,  health authorities targeted the fig remedies.  The American Medical Association (AMA) Journal wrote:  “Syrup of Figs is a laxative whose chief advertising asset 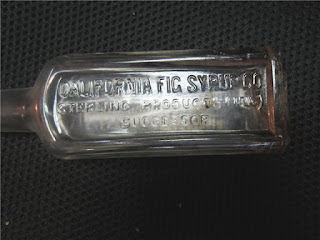 is its name.” It continued that any purging action was due to the presence in the mix of 25%  senna, a tropical herb with well-recognized laxative effects. The AMA also noted that the syrup was 6% alcohol, about the potency of beer.  Eventually Federal officials forced the fig syrup floggers to list senna and alcohol on the label.  In England, however, the product continued to be sold the old way.  California Fig Syrup Co. simply prepared two different boxes and labels.

None of this meant much to Fridolin Madlener.  He was a Chicago liquor blender and 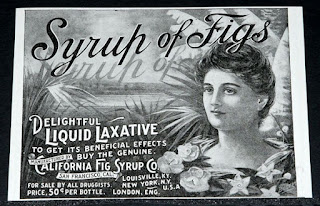 wholesaler.   Seizing on the popularity of fig remedies, he melded fig syrup with the rye whiskey he was mixing up in the back room and, eureka, Fig Rye was born.

Madlener was not content with merchandising Fig Rye as  a laxative.  His advertising touted it  as “an ideal health whiskey.”  Ordinary whiskey, he claimed, was distilled totally from grains and “destroys the lining of the stomach, makes the liver hard as a rock, and causes disease of the kidneys.”   By contrast,  Fig Rye neutralized all 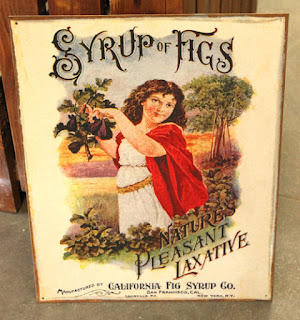 those bad effects and was recommended for “the dyspeptic, the consumptive, the debilitated, the weak....”   According to one Madlener ad,  Fig Rye was used in 1,500 hospitals across America and prescribed daily by thousands of doctors.

After Fridolin’s death in 1897, his son Albert continued to promote Fig Rye vigorously. The firm advertised in national magazines and sold it by mail all across America. One Madlener ad claimed that 100,000 bottles were sold annually.  On the strength of its profits Albert commissioned the construction of a grand new house in Chicago’s Gold Coast.  Currently on the National Register of Historic Homes, the mansion can be characterized as “the house Fig Rye built.”

Because whiskey was not subject to the labeling

requirements of the Food and Drug Act,  The AMA and the Federal food police could not lay a hand on the Chicago-based company.   The coming of Prohibition, however, did spell a finish to Fig Rye.   Fridolin Madlener,  the man who gave the world Fig Rye, is buried in Chicago’s Graceland Cemetery.  His grave lays beneath a huge monument bearing the family name and ornamentation that looks, at least to me, like hanging bunches of figs. 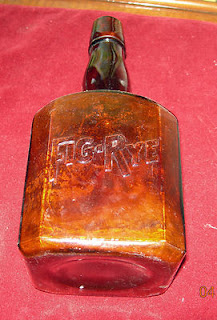 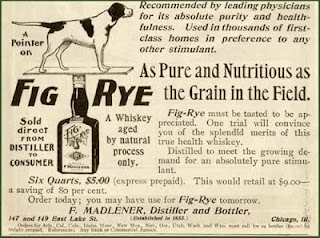 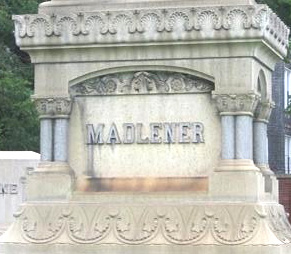 Vintage Automobiles in a Shoebox 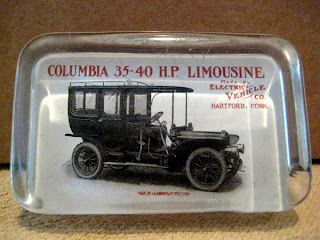 A new technology always spawns multiple businesses, each one seeking to profit by its particular genius.  So it was when the motor car first hit American streets. Whether steam, electric or gasoline fueled, there was a sudden proliferation of makers, brands and models.  Some endured, others did not.  Old enough to remember the days when electric cars and the Ford’s Model T were not totally unusual sights on the streets of my town, I seldom pass up a chance to attend an exhibit of vintage automobiles and often wish I owned one.  Now it is possible to collect antique cars and store them 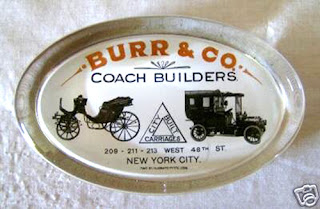 in a shoebox. They just have to be captured on paperweights.

The limousine shown here was produced by the Columbia Automobile Company, created in 1899 as a joint venture of the Pope Manufacturing Co. of Hartford, Connecticut and the Electric Vehicle Company.  The outfit made both gasoline and electric powered vehicles.  Its electric models included taxis and police cars, buses, and limousines.  The Columbia electric runabout was the best sellng car in America in 1900 and the 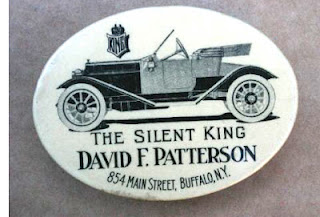 first to exceed 1,000 sales.  The weight can be dated to a reasonably narrow time frame.  The company was acquired by the U.S. Motor Company in 1910.

A nifty weight is from the Burr Co., Coach Builders of New York City. This firm was founded in the 1880s to make luxury horse-drawn carriages.  When the automobile was invented, Burr tried to make the transition from carriages to cars with a factory located at the southern edge of Gotham’s automobile row.   Speculation is that Burr created the bodies to fit 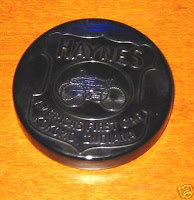 on other chassis and never produced a complete vehicle.  In any case along with the buggy whip,  Burr & Co. became extinct about 1915.

The “Silent King” automobile, seen here on a celluloid paperweight issued by a Buffalo auto dealer,  was the brainchild of Charles King, the first person to drive a gasoline powered automobile in Detroit.   In March of 1886, operating a vehicle of his own invention,  King took a history-making ride down Woodward Avenue at a rip-roaring six miles an hour.   History records that Henry Ford followed him on a bicycle.  After working for other early auto manufacturers, Charles opened King Motors in 1910, producing sporty cars like the one shown here.

A cobalt glass weight proclaims Haynes as “America’s First Car”  with dubious validity.  As early as 1894, Elwood Haynes built an vehicle that he called the “Pioneer” and claimed that it was the first American automobile well after it was apparent that there were earlier U.S. models.   The Pioneer had no crank and had to be started by pushing it.  Once the engine caught the car moved at a stately seven to eight miles an hour.  The photo shows Elwood sitting in his invention.   Haynes continued to make cars until 1924 when financial problems caused the company to declare bankruptcy and ultimately cease operations.

The Kissel Motor Car Company was an American automobile manufacturer founded by Louis Kissel and his sons in 1906 in Hartford, Wisconsin.  The company built quality gasoline powered automobiles, hearses, taxis,  fire trucks and utility vehicles.  During World War One Kissel prospered, selling trucks to the military but 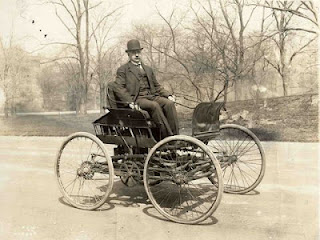 stiff competition and the Great Depression forced it into bankruptcy in 1930.

About the same time that Kissel was crashing the Locomobile Company of America was going out of business.  Founded in 1899, initially in Watertown and later in Bridgeport, Connecticut,  Locomobile began by manufacturng small steam cars.  In1903 the company switched to making internal combustion-powered luxury automobiles.  Bought in 1922 by Durant Motors, the Locomobile line continued until 1929.

The Hupmobile was the brainchild of Robert C. 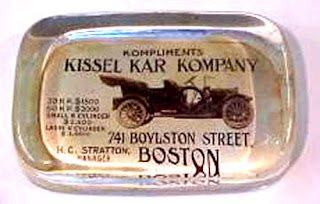 Hupp who began to build automobiles in a factory in Grand Rapids, Michigan in 1908.  The vehicle was introduced to the public at the Detroit Auto Show in 1909.  A year later his production had soared to more than 5,000 units.  After disagreements with investors,  Hupp sold out about 1910.  The new owners were auto pioneers and among the first to use all-steel bodies.   The company survived the Depression and competition to close in 1940. 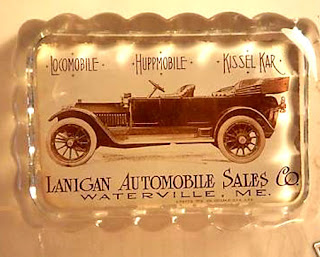 Based in Anderson, Indiana, the Lambert Automobile Company was founded in 1905 by another automotive pioneer,  John William Lambert.  His Lambert automobile was one of the most successful on the market, eventually selling 3,000 cars a year.  He also produced trucks, fire engines and farm tractors.  Most of these were chain driven, not powered through a drive shaft. With the outbreak of World War in 1917 Lambert converted his factory for defense work,  making explosive shells, caisson wheels and military fire engines.  Recognizing that automobiles were going to be made only by large manufacturers,  after the war Lambert did not resume automobile production. 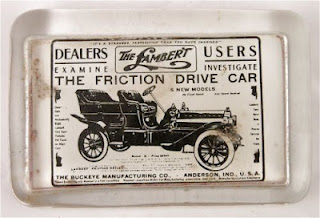 The Jordan Motor Car Company was founded in 1916 in Cleveland, Ohio, by Edward S. “Ned” Jordan, a former advertising executive turned entrepreneur.  His factory produced what became known as “assembled cars,” using components from other manufacturers.  Jordan’s vehicles were known for their styling and original advertising, rather than their advanced engineering.  Jordan’s theory was that his competition was too dull and drab.  Since people dressed smartly, he reasoned, they wanted smart 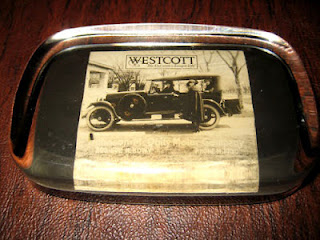 looking cars.  He provided them with the Jordan until 1931 when the Depression killed his market.

There they are: Ten classic automobiles and ten stories of automotive pioneers and their now vanished companies. The real vehicles, parked one to another, would fill a sizable barn  and cost millions.  Pictured on vintage paperweights, however, they easily can be housed in that proverbial shoe box.  Moreover, they never need a drop of gasoline. 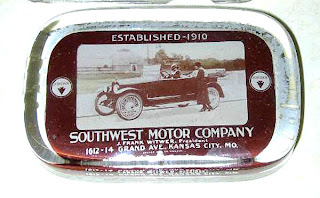