North to the Klondike in a Flask 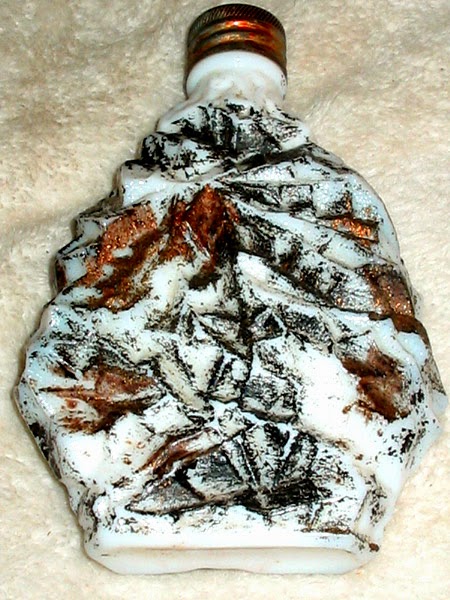 In keeping with the title of this blog, from time to time I feature a bottle or bottles.  This time the subject is a whiskey container known widely by collectors as the “Klondike Flask.”  It has been called “one of bottle collecting’s classical figural bottles.”

Only six inches high, the milk glass bottle is shaped like a mountain range or glacier with brown and gold paint on both sides that emphasize the rugged nature of the terrain being depicted.  It was the brainchild of George Smithhisler, the Ohio liquor dealer who designed it, provided the several swallows of liquor the bottle contained, and issued the flasks in substantial numbers, apparently as a memorial to the Yukon Gold Rush.
In 1847 George's father moved from Holmes County to Knox County, located in the central part of the Buckeye State,  approximately 30 miles north and east of Columbus. The county seat is Mount Vernon, named after the home of George Washington.  By the time the Smithhislers arrived, the town had about 2,500 inhabitants, a court house, a market house, churches and a number of taverns.

I surmise that Smithhisler’s father may have been making some liquor on his farm for local consumption and that George grew up in a tradition of distilling. Initially a farmer, in time young Smithhisler established himself as a wholesale and retail liquor dealer, located at 15-17 West Vine Street in Mount Vernon.  A trade card indicated  that he was dealing in both foreign and domestic wines and liquor.  He is shown here with his first wife who unfortunately died at an early age.

Around the turn of the century Smithhisler issued his famous flask.  At that time the Klondike held great fascination.   A region of the Yukon in Northwest Canada, east of the Alaska border, it lies around the Klondike River, a stream that enters the Yukon from the frontier town of Dawson at the east.    Gold had been discovered in 1897 and precipitated a gold rush that saw thousands of prospectors heading there with dreams of riches. 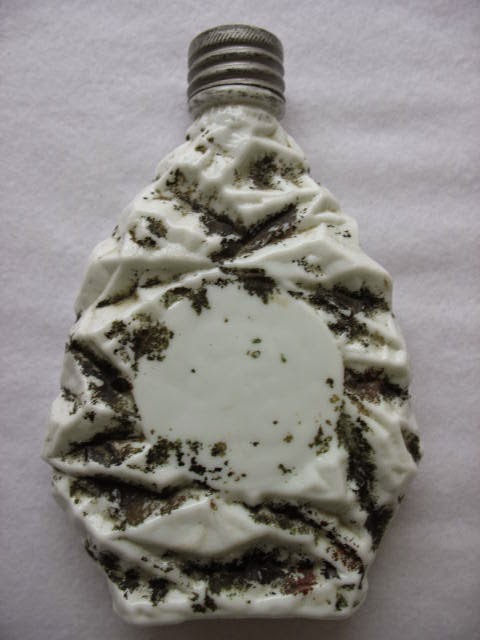 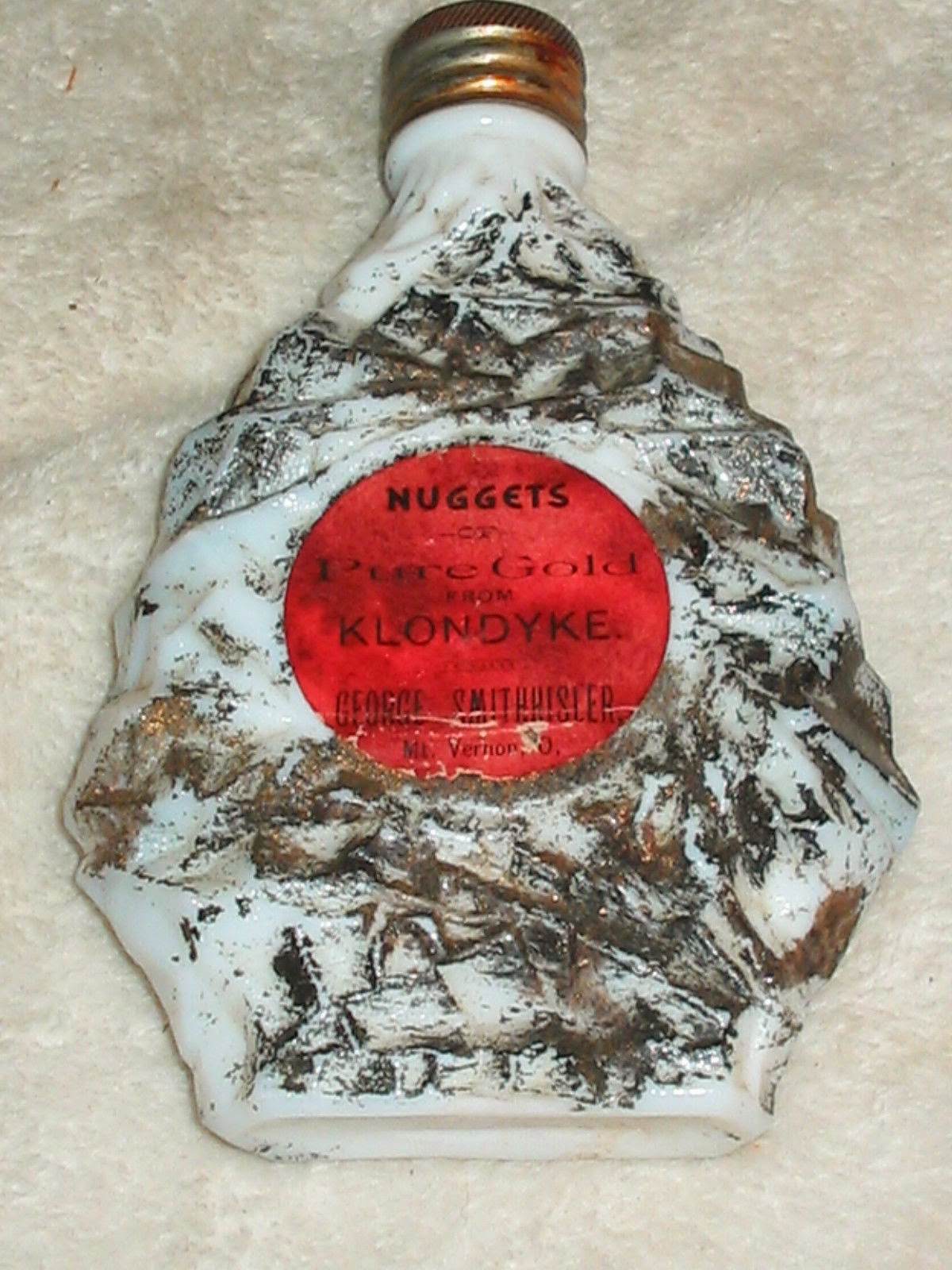 It also inspired Smithhisler to issue his small milk glass flask of whiskey.  It bore a round red label, announcing the contents as “Nuggets of Pure Gold from Klondyke” -- an alternative spelling -- and included his name and location. The flask also featured a metal screw cap that sealed the threaded neck and covered the ground-off top of the bottle. 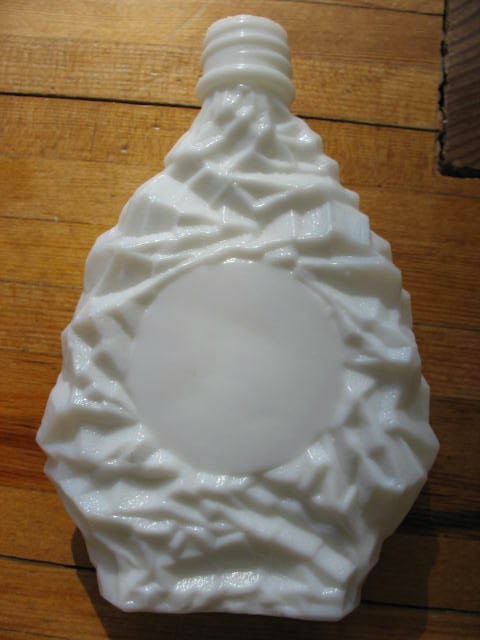 Through the years this artifact has attracted considerable attention from bottle and glass collectors.  It was blown in a mold that took a considerable amount of time and attention to create the mountain effect.  It also required painting by hand to overlay the glass with gold and brown pigments.   With time and wear, as shown here,  some examples have lost their labels and significant amounts of paint.  In one case an owner stripped the bottle down to its milk glass base, revealing the full extent of the ridges and valleys.

The noted expert on American glass and bottles, Dr. Cecil Munsey, has been fascinated with the flask, calling it a “classic.”  He has asserted the belief held by many that the bottle was inspired and made just before the beginning of the 20th Century to commemorate the Klondike gold strike.  My additional suspicion is that George, having lived all his life in Central Ohio, might himself have wanted desperately to go “North to the Yukon” to seek his fortune digging in the tundra for gold.  With a second wife, four children, a farm and a liquor business, that was a dream Smithhisler would never to be able to achieve.  His flask may well have been “Plan B.” 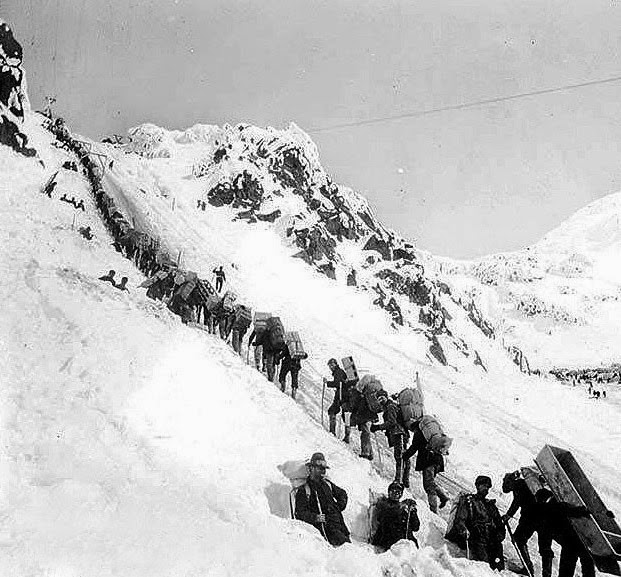 The inspiration for the flask design might well have come from newspaper photographs of prospectors struggling through the snows over the mountains, such as the iconic photograph here.  Taken by George C. Cantwell, it shows Klondikers carrying supplies over the Chikoot Pass.  Note that the contours of the peak at right, depicting alternating rock and snow are similar to those on the flask. 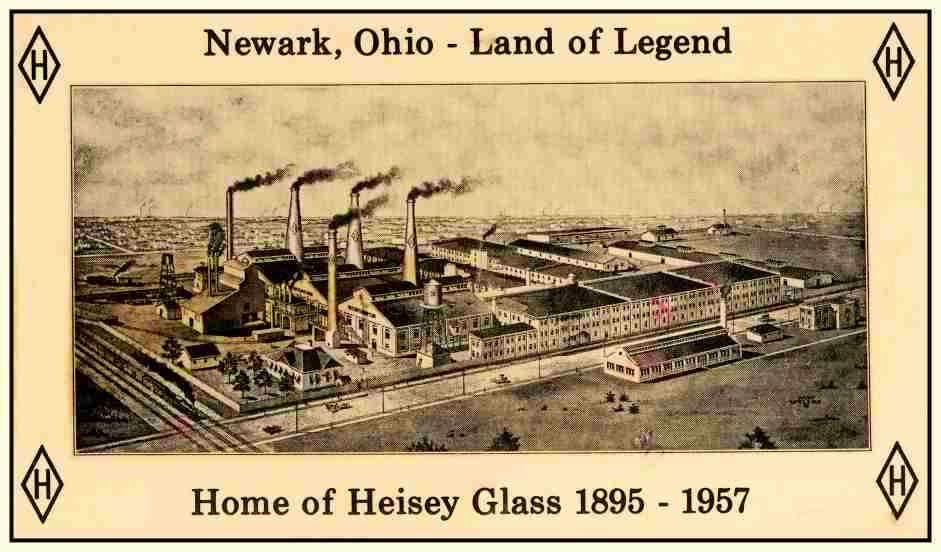 Although the bottle bears no mark, it almost certainly was the product of the A. H. Heisey Company established in Newark, Ohio, in 1896.  Heisey and his sons operated it until 1957.  The glassmakers were known for the crispness of their molding and they featured a line of milk glass.  Shown here is a Heisey toothpick holder that has a painted beadwork reminiscent of the Smithhisler flask. 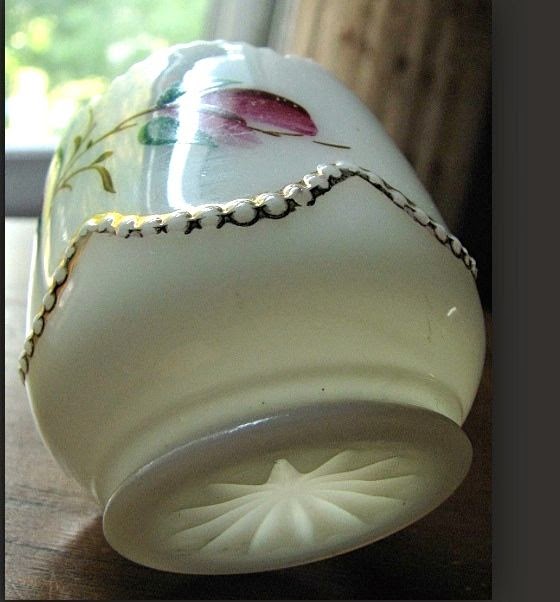 Little else about Smithhisler has entered the historical record. He seems never again to have designed and  issued a figural flask or a notable bottle of any kind. His liquor business  closed by 1916 when Ohio voted to go “Dry.”  In his later years it appears he relocated to Cleveland, perhaps to live with one of his children.  In November 1930, Smithhisler died at City Hospital in Cleveland at the age of 80. His body was returned to Mount Vernon where he had spent most of his life and was buried in Calvary Cemetery there.  Meanwhile, the flask that bears his name lives on in collections throughout America.

Posted by Jack Sullivan at 2:46 PM No comments: 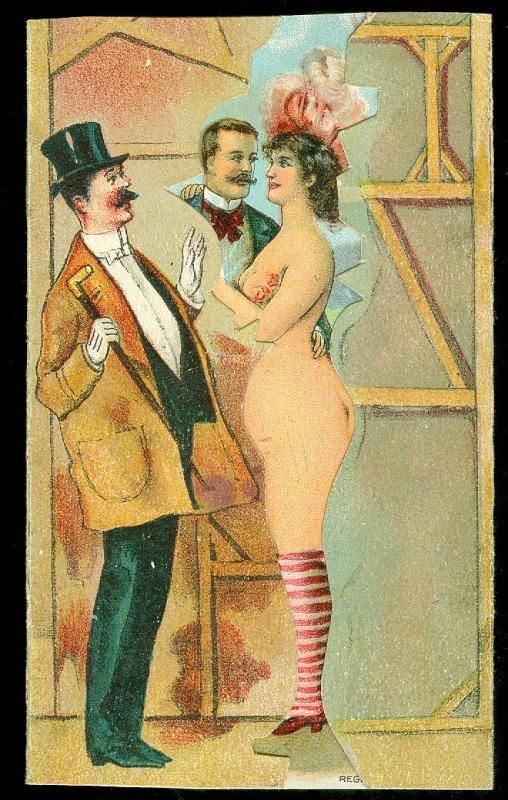 Most of us will remember that Beatles’ verse from their song, “Daytrlpper.”  It applies very well to the “metamorphic” whiskey trade cards shown here.  They are cards with folds that when closed give an impression of something risqué going on but when opened have a surprising and (mostly)  innocent explanation.  This post will examine five of them and provide some material on their origins.

The first shown here is the most revealing of female pulchritude.  We appear to be backstage where a woman dressed in a hat, bra and stockings and nothing else is embracing a man with a handlebar mustache.  A second man with a hat and cane has approached and is clearly astonished at what has greeted his eyes.   When opened, the card reveals the woman dressed in an evening gown while a her man friend shows her a bottle from which he has just poured them glasses of wine.  More bottles are on the table and a full case on the floor.  Meanwhile a servant is bringing food.  A party is clearly indicated — or perhaps a liquid rendezvous for two. 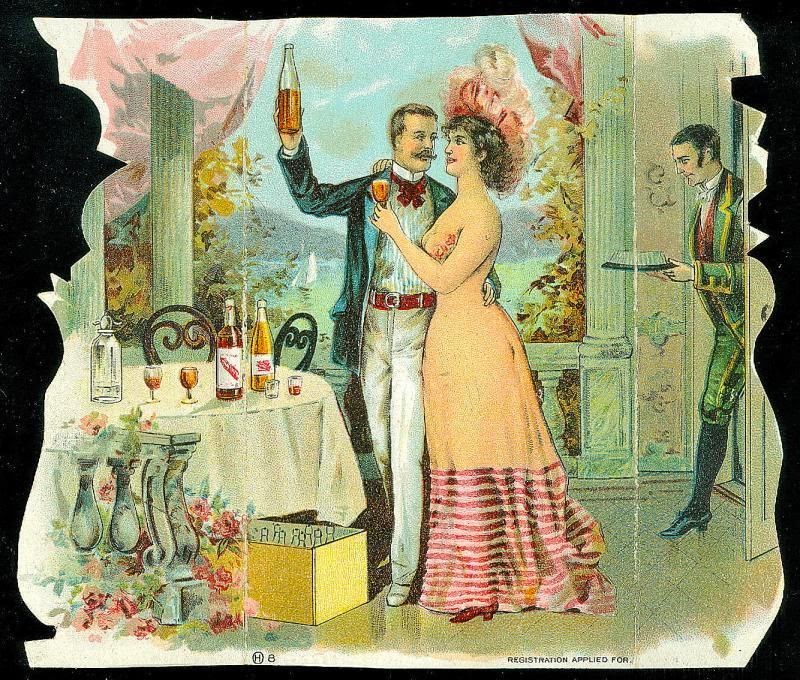 Trade cards such as this are known to ephemera collectors as “metamorphic,” that is, they change their form and nature completely when opened.  Sometimes they are said to “transmogrify,”  that is, change or alter greatly with a humorous effect.  This card, unlike most, carries no message but would have been available to a whiskey or wine dealer to print an advertisement on the back.

The next trade card has a similar suggestive motif.  It shows what appears to be a couple sprawled on the ground under a large red umbrella.  A man, identified by his shoes, pants, and jacket, appears to be atop a woman.  We see only one of her shoes and a bit of stocking.   Most surprising is the figure of a second man with a straw hat and a fishing pole who is calling out, “Hold on, I’m in for some of that too.”   What is this, a group grope?

But no!  When opened it reveals a young foursome sitting by a lake drinking from a full case of “Old Beauford Rye.”  Everyone is enjoying a beer glass full of the liquor, which may indicate that the real action may come later.   The Old Beauford brand of whiskey was the product of the Duchateau Company of Green Bay, Wisconsin.   The proprietor was Frank J. B. Duchateau, who was a prominent businessman in a town most famous for its Packers football team.  Duchateau is remembered as a man who invented a folding pail, led efforts to assist Belgium in World War I, a collector of Native American artifacts, and a strong supporter of the county public museum. 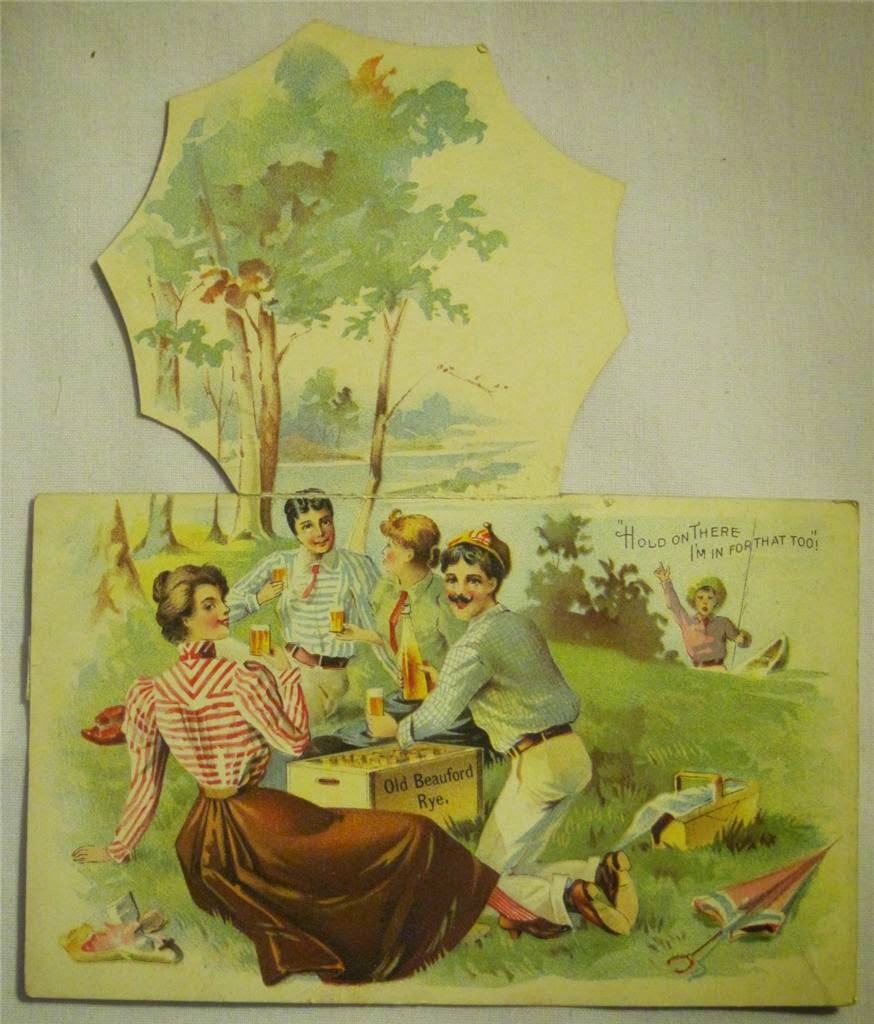 Umbrellas are a popular motif in the metamorphic world.  Shown here is a card of a beach scene that shows what appear to be a pair of bare female legs in close contact with a man who is fully dressed with striped pants and pointed shoes.  When opened it reveals a short, fat man who is lighting a cigar from one being smoked by a man in a straw hat and jacket.  “Fooled again!” is the message.  Moreover, we are informed that we will always be fooled unless we use “Resurgam Rye.”  The merchandiser is identified as the “Dallas Transportation Company.”  Despite its name, the Dallas Transportation Co. was a liquor and beer distributor. 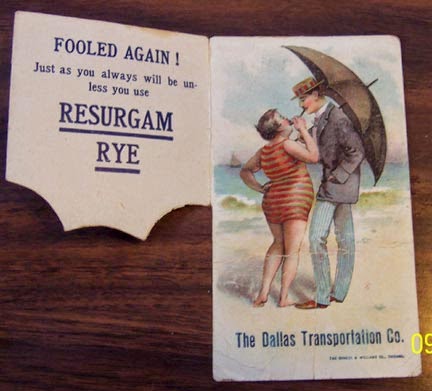 The name “Resurgam,”  which in Latin means “I shall rise again,” gained attention in 1878 when it (appropriately) was the name given to an early submarines designed and built in Britain by an Episcopal priest.  They were a weapon to penetrate chain netting placed around ship hulls to defend against attack by torpedo vessels.   Unfortunately for the crew, in February 1880 the Resurgam did not live up to its name and sank in Liverpool Bay..

The third trade card has a rustic motif in its folds.  At first glance it shows a leering old farmer gazing at the stockinged leg of a pretty young miss wearing a bonnet and apron.   He is exclaiming, “Well!  If those ain’t the finest leg I ever saw,”  a comment that does not seem to be displeasing the damsel.  Upon opening, we see the shapely leg belongs to a young rustic, dressed in a straw hat and suspenders.  The girl has an apron full of chicks.  The foxy grandpa is exclaiming not on legs, but on “leghorn chicks.” 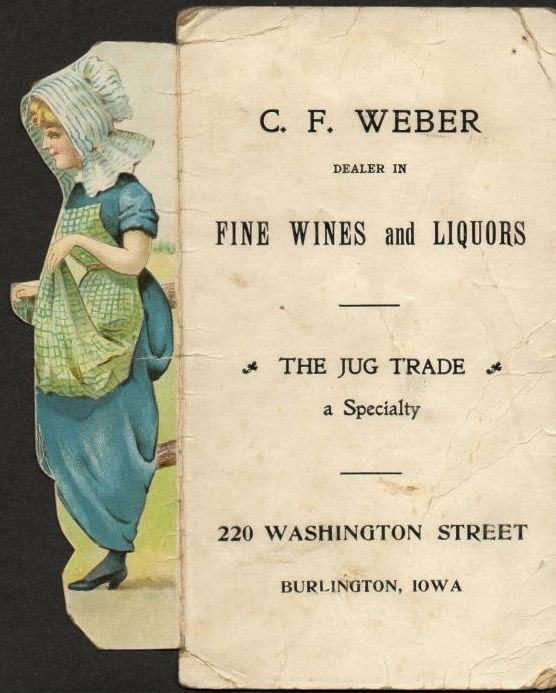 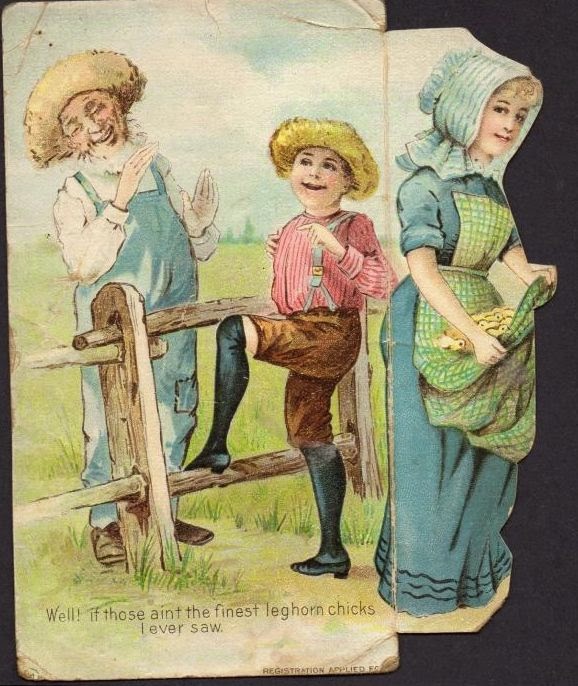 The back of the trade card identifies the issuer as C. F. Weber, a dealer in wines and liquors in Burlington, Iowa.  Weber was a well known merchant in Burlington, born in the city in 1864.  He was forced to go to work at the age of 10, working in a brick yard and later in a wheel factory while still in his teens.  By the age of 20 he had earned enough to open his own liquor business  and found success for more than a quarter century.   His wealth allowed him to purchase 176 acres of land near Burlington where he built a country home and raised cattle. 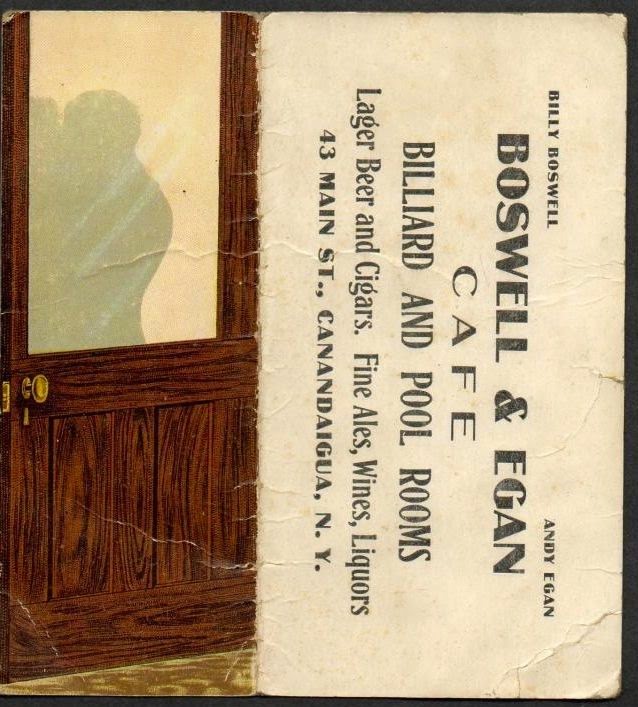 Our final teaser card was issued by the firm of Boswell & Egan, representing Billy Boswell and Andy Egan.  They ran a cafe, wine and liquor store, and pool room on the Main Street of Canandaigua, New York.  The first view here is through the glass in a door.  We see just the shadows of two people, presumably a man and a woman in an embrace.  Opened there is no transmogrifying surprise.  Two people are kissing.  But wait!  The woman is dressed as a serving girl.  She carries a tray in her hand.  The gent has on a smoking jacket, a sign that he is at home.  Wife not home, servant willing….  Is some kind of assignation going on?  Perhaps only Boswell & Egan knew. 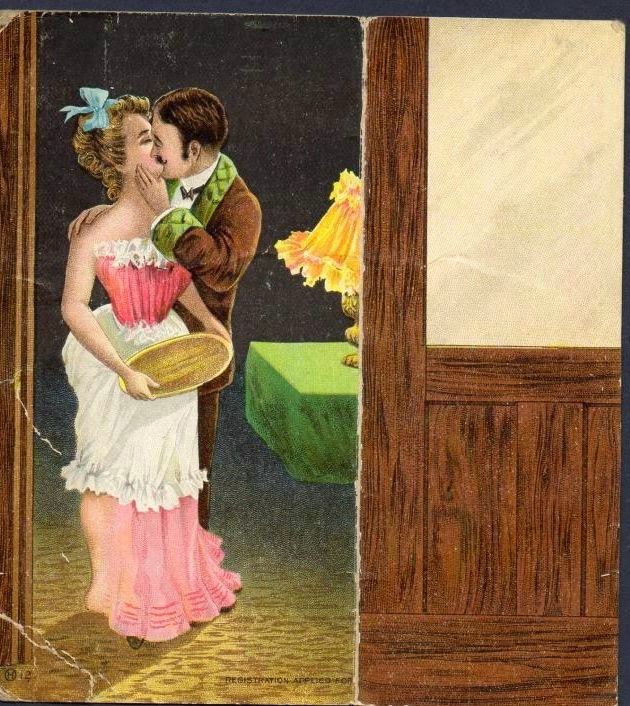 This card, like the ones shown before it, are “big teasers.”   Like the woman in the song they take us half way there with their appearance.  Unlike the man in the song, however, it does not take us long to find out we have been teased.  All we need do is fold back the flaps.  In life the process is a bit more complicated.


Posted by Jack Sullivan at 1:38 PM No comments: