Prohibition: The View from Thuringa 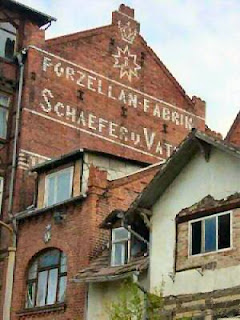 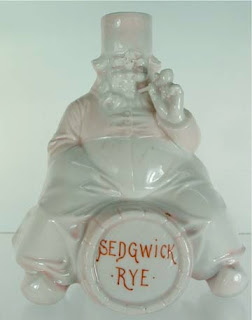 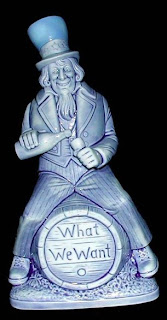 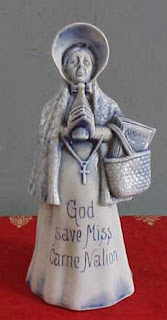 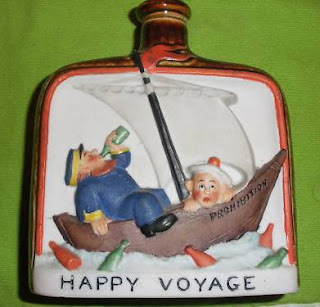 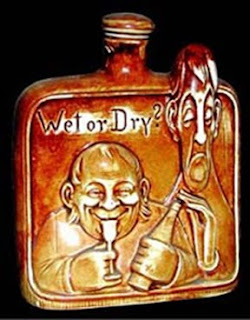 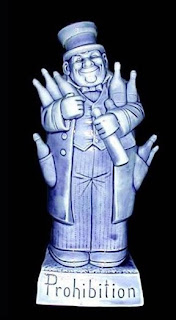 In 1896, Gustav Schafer and Gunther Vater founded the Schafer and Vater Porcelain Factory in Thuringa, Germany, with the purpose of making high quality porcelain items. By 1910 the reputation of the pottery for craftsmanship and design had grown to international proportions and Sears Roebuck was importing and selling large quantities of Schafer and Vater pottery in the United States.

Among the pottery’s products were a host of small figural liquor bottles for distribution by American distillers and saloons, called nips.” The term is taken from an Old English word nipperkin, meaning a container of liquor holding a half pint or less. These German giveaways were always imported empty, then filled by a distiller, whiskey distributor, or saloonkeeper and handed off to favored customers.

An example is the “Old Sedgwick” ceramic figural. That was a brand of the A. Bauer Distillery of Chicago, a distiller profiled briefly in my blog of Sept. 18, 2009. This bottle has the brand name glazed right along with the figure of the jolly Dutch toper, sitting on a barrel and smoking his pipe. Many nips bore paper labels identifying the giver and containing company advertising.

With the coming of National Prohibition to the United States, this major business opportunity was largely denied to Schafer and Vater. Profits from their American exports were severely curtailed. The company response was to design and sell objects lampooning the notion of abolishing alcoholic drink. Several of these nips are my favorites.

For example, the pottery produced a jolly Uncle Sam sitting on a barrel pouring himself a large drink from a large bottle. On the barrel is written -- What We Want. This was a clear message about the unpopularity of Prohibition. Uncle Sam’s hat comes off to decant the liquor. This figure came in blue and brown glazes and also in multicolored painted versions.

Another figural nip makes fun of the hatchet-wielding Temperance terror from Kansas, Carrie Nation, discussed in my blog of Oct. 23, 2009. The nip is a pious looking woman in a bonnet and shawl clutching a large bottle, her eyes lifted heavenward, her hands folded a in prayer. Her skirt carries the message: God save Miss Carrie Nation. This same figure comes with a range of messages. One of them asks God to save Francis Willard, the well-known leader of the Women’s Christian Temperance Union.

Often Schafer andVater nips came in bottle shapes with a cartoon in bas relief on one side. Among them is one multicolor ceramic showing the good ship “Prohibition” whose captain is swigging down what one presumes to be alcohol, throwing the empties into the sea, while a sailor looks on in some alarm. Another in a brown glaze, contrasts the happy drinker with the stern faced Prohibitionist and asks the (easily answered) question: “Wet or Dry?”

We conclude with a nip figurine of a rather stout gentleman with a wide smile on his face and carrying bottles, presumably of whiskey, in his hand, arms, and pocket to point of breaking, nine in all. The caption at this feet says simply Prohibition. I have pondered what message Schafer & Vater tried to get across with this image. My guess: This gent represents the fact that drinking in America actually increased in many places during Prohibition.

After a fire destroyed its first factory in 1918 Schafer and Vater rebuilt and continued to produce high quality ceramics. As a result of World War II and its postwar location in Communist East Germany, the company’s international customer base was cut off. The pottery began a slow decline that ended in 1962 when it closed. In 1972 the East German Government assumed full control of the vacant factory and is reported to have destroyed all company records and molds. The interesting and inventive ceramics of this Thuringan firm presumably can never be reproduced. As a result, Schafer and Vater nips today not only are avidly collected, they often bring fancy prices.
Posted by Jack Sullivan at 12:43 PM No comments: 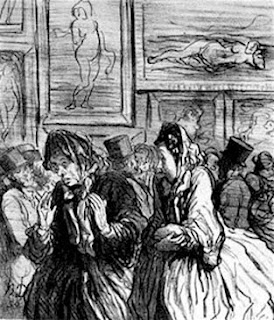 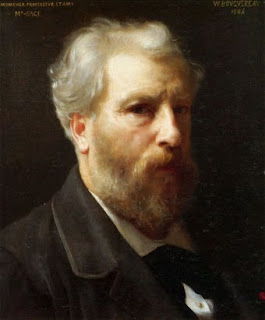 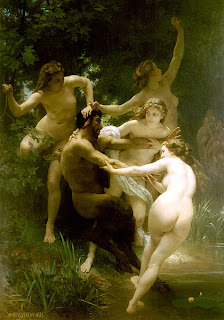 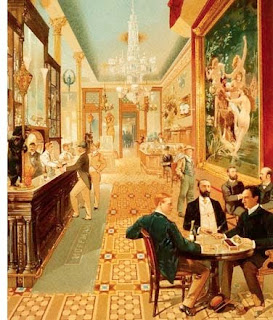 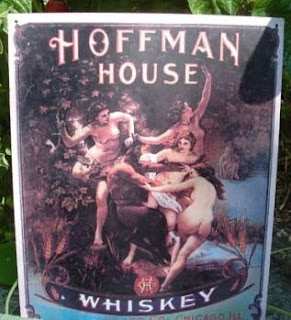 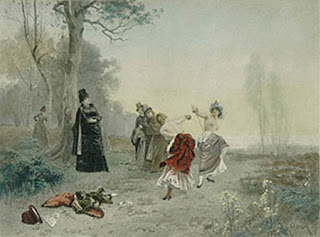 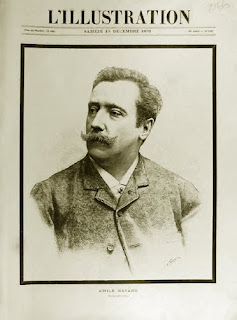 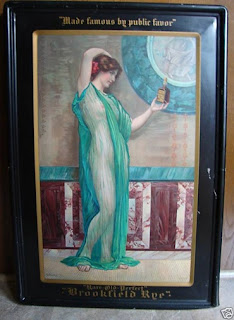 By 1748 the official exhibit of the French Academy of Fine Arts, known popularly as the Paris Salon, had become the greatest art event in the Western World, a status it maintained for 142 years. First held annually and later biannually, the Salon had undisputed influence in Europe and abroad. Nudes were a regular feature of the exhibits, many of them “dressed up” in mythological references. As shown here, in 1864 Artist Honore Daumier satirized middle-class French women scandalized by the Paris Salon’s many paintings of the naked Goddess Venus.

Nude paintings in the exhibit, often in reproduction, found a ready audience in the United States. American drinking establishments, from which women and children almost always were barred, regularly featured paintings of unclothed women over the bar or on the walls of their dark wood environs. The fleshy products of the Salon inevitably made their way to the American saloon.

Among the most popular and widespread were the works of William-Adolphe Bouguereau (1825-1905). Shown here in a self-portrait, Bouguereau was a staunch traditionalist whose realistic paintings on mythological themes were interpretations of classical subjects with a heavy emphasis on the female body. One of his most popular Salon offerings was called “Nymphs and Satyr,” showing a bevy of unclad damsels cavorting around a half-man, half-goat figure.

It was just the thing to lend a touch of French class to a Yankee bar. At the Hoffman House, a well-known Manhattan males-only bastion, a copy of the notorious Bouguereau painting resided on one wall. For a hefty fee Hoffman House allowed its name and the painting to be used to advertising products like cigars and whiskey. As a result “Nymphs and Satyr” was replicated on saloon signs and a wide array of merchandising items. It became as well known in the U.S. as in France.

At the Paris Salon of 1884 appeared a painting by a popular French artist named Emile Antoine Bayard (1837-1891). Entitled “An Affair of Honor,” it represented a duel with rapiers between two women who were stripped to the waist. The scene was laid in a well known Paris park where reputedly many encounters of this kind reputedly occurred among French courtesans. The popularity of the picture was enormous and it was exhibited all over the world.

Much reproduced, the image found its way into many of our 19th and early 20th Century barrooms. The Klein Brothers distillers of Cincinnati added advertising for their whiskey brands on the picture and gave copies away to favored saloon keepers. As for Artist Bayard, shown here on an 1891 magazine cover, he later moved to illustrating novels, among them “Uncle Tom’s Cabin.”

Asti is reputed to have spent some time in America, specifically Ohio, where he may have met the Bieler boys, three scions of a Cincinnati distilling family. The Bielers had an eye for advertising their Brookfield Rye whiskey with feminine pulchritude. They distributed signs and other artifacts that displayed a fetching lady wearing a diaphanous dress and contemplating a bottle of their whiskey. It bears Asti’s signature in the lower left.

Just as the Paris Salon lost popularity in the early 1900s, so the death knell of saloon nude art was sounded by the onset of Prohibition in 1920. When Repeal occurred in 1934 women now had the vote, openly quaffed alcoholic mixtures, and increasingly frequented dens of strong drink. As the females began to walk through the swinging doors in ever great numbers, the nudes behind the bar began to come down until today they are virtually as extinct as the dodo.