Memories of a 1979 Asian Refugee Crisis 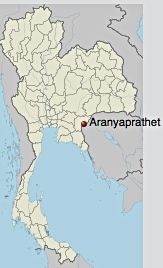 On May 20, 1979, more than 30,000 Cambodians, armed Khmer Rouge soldiers with their wives and children and assorted civilians, crossed into Thailand near Aranyapathet, shown on the map here, in flight from attacking Vietnamese troops.  At the time, as the head of USAID’s Asia Bureau, I was on my way to Pakistan on a mission visit.  But not for long.

The refugee crisis had caught world attention. Henry Kamm, a New York Times reporter who specialized in Indochina refugee problems wrote two op-ed pieces criticizing the Carter White House for not taking immediate relief efforts.  The President promised to send his wife, Rosalynn, to the scene but first ordered that I abort my trip and fly immediately to Thailand to make an assessment of the most pressing needs and offer assistance.  With another USAID official, Dennis Chandler, we flew to Bangkok and by car drove 250 kilometers to the camp. 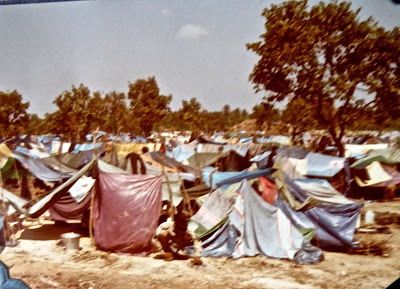 My first impression upon reaching the scene was of a sea of small plastic tents, closely packed on a huge sandy field, shown above.  Most tents held a Khmer Rouge solder and his family.  It was traditional for Cambodians in a military force to bring their wives and children with them as they maneuvered.  As I knew from my 1970 mission in Cambodia, this custom had proved disasterous to the Royal Khmer army as it earlier had fought the Viet Minh.  Now it had afflicted the Khmer Rouge. 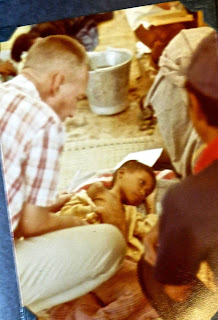 Although personally antagonistic toward the Khmer Rouge for murdering so many of my contacts in Cambodia, one could only be deeply touched by the camp scenes going on all around us.  Many of the children, as well as adults,  had arrived in Thailand malnourished and severely sick or wounded. The death toll in the camp was registered at some ninety per day. 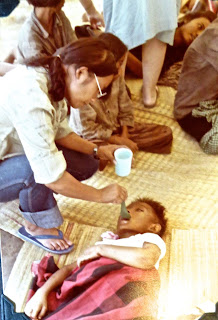 Shown above is an American missionary doctor who is tending to a sick child.  Other doctors had set up a makeshift operating tent and were engaged in surgery on those wounded in the fighting.  As shown here, other volunteers were feeding children.  U.S. Embassy personnel, including U.S. Ambassador Mort Abramowitz and his wife, were on the scene bathing babies and providing clothing.

As shown below, food was being trucked into the camp daily by the United Nations High Commission for Refugees (UNHCR)  whose representatives were in nominal charge of the camp.  When the shipments arrived hundreds of refugees surrounded the trucks, looking for their daily allotment of food.  Even though many were hungry they were remarkably disciplined in waiting their turn, likely kept in line by the Khmer Rouge hierarchy many of whom had managed to lose or hide their military ranks but were well known to the refugees. 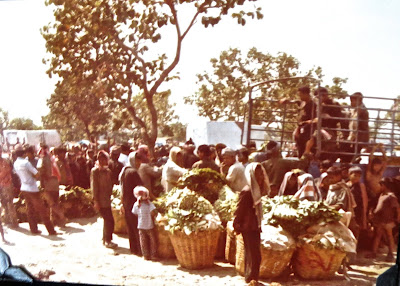 I photographed members of our team as we discussed how best  USAID could provide assistance to the camp.  At left is Dennis Chandler, next a Thai USAID employee, and Jack Williamson, an American in the Thai USAID who was highly valuable because of his experience in Indochina and his fluency in Thai.  Jack had briefed our group on the long road from Bangkok, a group that included Bill Garrett, managing editor of National Geographic.  Here we are talking to the UNHCR deputy camp director, an American named Schweitzer. 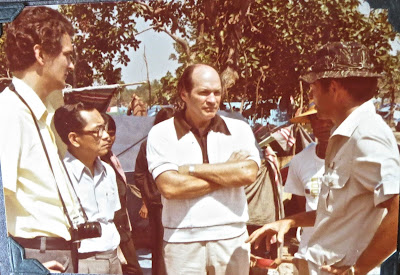 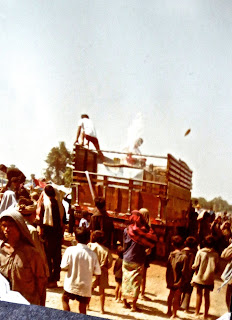 The most pressing need, Schweitzer told us, was for water.  Humans can live for a time without food but access to potable water is essential, especially important in the heat of the Thai day.  At that time water was being trucked in by the tank load, barely enough to meet camp needs.  Even larger crowds than met the food trucks welcomed the arrival of the water.  As shown below, the precious drops were carried away in a variety of containers.

I immediately inquired about the possibility of digging wells and was assured that preliminary hydrological studies indicated that there was a usable water table under the camp that could be reached by drilling.  Remembering that at least two of the Asia Bureau’s missions were currently involved in well-drilling projects, I assured Schweitzer USAID could have the expertise — and as needed the equipment — on scene in a matter of days.  We transmitted the word back to Washington. 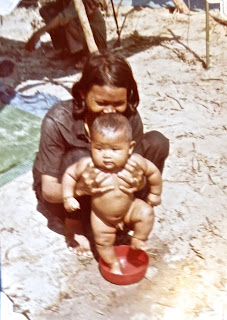 As we were leaving the camp for the long ride back to Bangkok, I spied and photographed a scene that reminded me of something George Orwell had written in his book, “Animal Farm.”  There Orwell compared the egalitarian claims of a communist organization like the Khmer Rouge with the reality:  “Some are more equal than others.”   As I was passing by one shelter I was struck by a mother bathing a fat baby boy, a far contrast from all the emaciated children I had seen earlier. Then I caught a glance of the boy’s father, still in the uniform of a Khmer Rouge commander.  The reason for the contrast became clear.

Continuing on to my initial overseas destination, it was two weeks or more before I returned to my office in Washington, DC.  Waiting for me there was the news that our USAID well-diggers had arrived in Thailand and were busy drilling down to the water table.  It would only be a matter of days before the water trucks no longer would be necessary.  Moreover, the death toll steadily was declining.

Despite continuing unrest and sporadic firing along the Thai-Cambodia border, Mrs. Carter visit the camp in early November, accompanied by Henry Kamm. He reported to the Times that the First Lady knelt next to the mats on which the sick were lying in the sand and declared at the end of her visit, “It's like nothing I've ever seen.”  Four decades later I can say the same.

Note:  The impulse to publish this memory and my photographs came as the result of contemplating the misery that COVID-19 is afflicting on human beings around the world, including in the many refugee camps, and thinking back on that heart-rending scene of sickness and death in Thailand.


Posted by Jack Sullivan at 7:13 AM No comments:

Half a Million Hits and Two “New Finds” 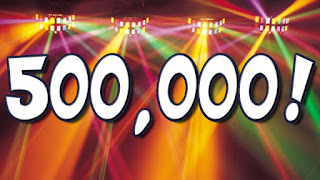 Foreword:  This post marks the point where this blog has reached just over 500,000 “hits” over its lifetime.  By comparison with many other websites that is a paltry number but “BottlesBooze…” from the beginning has been idiosyncratic, “about more things than you can shake a stick at,” and has not been geared to attract legions of followers.  From time to time I have used it to introduce “new finds” in collectible bottles, and just in time for this half million milestone two such have recently come  to light.

The first is an under-glaze transfer jug that figured in a trans-Atlantic debate I carried on thirty years ago with the leading British expert on ceramic bottles, Alan Blakeman.  At that time I was convinced that most, if not all, of the fancy whiskey jugs were made in Scotland or England and shipped to our shores.  Alan disagreed. He argued that the U.S. must have had pottery firms with the capability of designing and executing even intricate transfer designs. Alan was right. 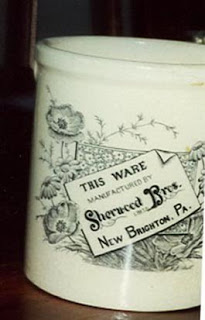 I saw the proof for myself in 1998. It was a small stoneware butter crock, likely a salesman's sample issued by the Sherwood Bros. Pottery of New Brighton, Pennsylvania. The crock is drawn with an elegance and precision equal to anything the “Old World” could produce. Ad copy on the item offers to provide underglaze transfer printed items of equal perfection to Sherwood Brothers clients.

The crock was part of a private collection of Sherwood Bros. ceramics that I had driven 280 miles to see in New Brighton.  The collector who regularly dug at the site of the former ceramics works, shown above, had  found a shard that indicated a similar pattern might be found on a whiskey jug.  In the 32 ensuing years I have looked for such an item without result —until last month.  Seen below is the jug as it appeared on eBay in March, advertised as “very rare” — almost an understatement.  Attracting five bidders, opened at $125 and ultimately sold for $305. 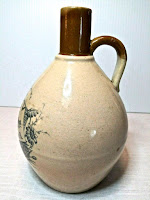 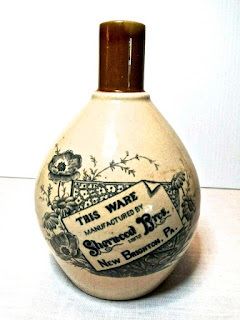 In tandem with the Sherwood Bros. jug, the same seller listed a second  container, this one from the Fulper Pottery Company of Flemington, New Jersey.  Year ago I identified this ceramic works as the source of a distinguishable variety of whiskey jug.  Since then I have compiled a list of some 135 different examples of Fulper products, a list I make available upon request.  I had never, however, seen this particular example before.  It advertised “Imperial Club Pure Rye” and was issued originally by the William Page & Company of New York City. 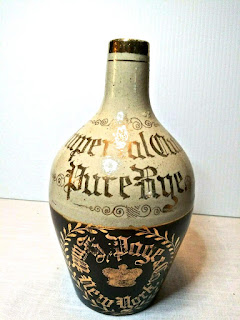 Because these jugs essentially are decorated over the glaze and are more than 100 years old, they frequently show wear on the gold lettering and design, particularly on the lower half that typically has a dark glaze.   As shown here, this jug shows some minor wear but in general has its decoration intact. I am particularly impressed with the elaborate gold crown at the center of the label that seems utterly intact.   Despite its appearance, this item, offered at $95, failed to attract single bidder.  Unfortunately these ceramics often do not fetch more than $50. In good condition, as this whiskey jug is, I think they are undervalued.