Risque' Whiskey IV: From the Salon to the Saloon

This is the fifth in the series of posts that feature the type of female images that often accompanied whiskey and other liquor advertising.  Because women — respectable women, that is — frequently were barred from the interior of drinking establishments, depictions of women in suggestive poses or nude were frequently on display on saloon walls or other barroom accoutrements.  The liquor sponsors seemingly believed that the more sophisticated and artistic their images appeared, the more comfortable their male audience might feel ogling them. 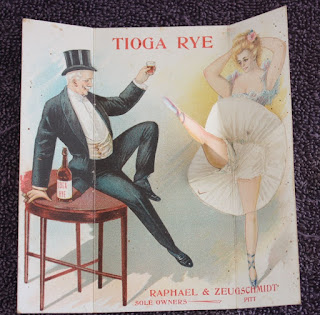 The Tioga Rye ad epitomizes the effort at sophistication.  The gent in top hat and evening attire probably was way overdressed for the clientele of the saloon where this image might have been displayed.  The liquor house behind the image, Raphael & Zeugschmidt, existed under various names in Pittsburgh from 1886 - 1918, an impressive run of thirty-two years.  In addition to Tioga Rye, the proprietors also featured “Popular Price Rye.” Another elegant image is projected by the El-Bart Dry Gin saloon sign of a young woman looking wanton by the seaside.  This brand was from an aristocratic Maryland family, the Goldsboroughs. The two Charles Goldsborough,  father and son, did not rise to the apex of the Maryland business and social world merely because of blood lines, however, but because they made good liquor and scads of money selling it.  Their Wilson-El Bart distillery was a large complex of three buildings on 3.43 acres in Baltimore totaling 80,000 square feet.

The four images that follow here are from a booklet entitled “Famous Paintings…Funny Stories” that would have been given to the retail customers of I. Trager & Co., a Cincinnati liquor wholesaler whose proprietary brands included “Cream of Old Kentucky,”  advertised throughout the text. 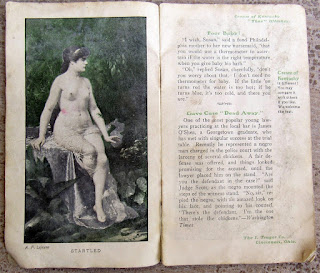 The allusion to “famous paintings” on the four nudes depicted in the booklet is something of a stretch.  The “A. F. Lejune" referenced on the one above is Adolphe Frederic Lejune, a French artist who was active roughly between 1879 and 1912.  He was what was known as a “salon painter,” providing images that were very traditional in their appearance.  I have been able to find nothing about the artist “Louis Perrey,” responsible for “Diana,” a familiar figure on many whiskey-related advertising, always with a bow and arrow. 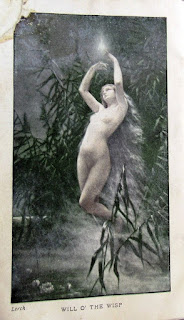 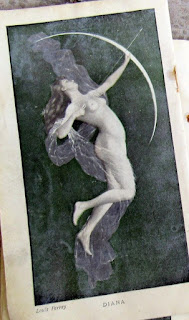 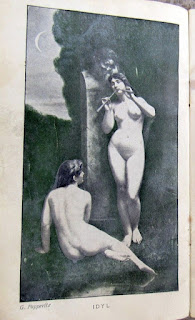 Nor are there clues to “Lerch,” the artist who painted the “Will of the Wisp.”   By contrast the artist of “Idyl” was George Papperitz, a German painter, sculptor and poet who was born in Dresden in 1846 and died in Munch in 1918.  You will note that none of these artist was truly famous.  Their inclusion was only because of their nudes. 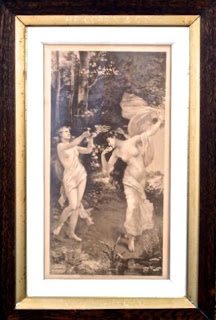 Cincinnati whiskey men seemed   particularly keen on nudes in their advertising.  H. F. Corbin provided his saloon customers with the wall sign shown here.  By seeming to be “classical” in its subject matter, such images were deemed more acceptable to the public.   The proprietor could be admired for his taste in art and the presence of frontal nudity was merely an accident.  The Corbin firm was founded in 1895 and went out of business in 1918 after Ohio voted statewide prohibition. 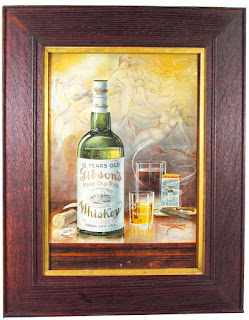 The nudes shown in the Gibson Pure Old Rye ad clearly are modeled on the salon-style women in the buff.  They are floating in various poses as a background for a bottle of Pennsylvania whiskey.  John Gibson was an immigrant from Belfast, Northern Ireland, who began distilling about 1840.  He ran a successful liquor business in Philadelphia but in 1856 built a new facility just to the south of Pittsburgh on the east side of the Monongahela river that he called the Gibsonton Mills Distillery.   From there the brand rapidly gained a national reputation. 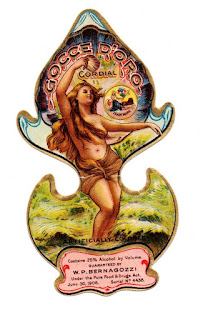 Strictly speaking, the following female figure does not represent whiskey but “Gocce D’ro,” sold as a cordial by W. P. Bernagozzi Co., who cited the Pure Foods and Drugs Act in connection with their beverage.  This may not have been a wise move.  In 1919 William P. and Ferdinand Bernagozzi were fined $100 after pleading guilty to misbranding containers of olive oil that they shipped from New York to Connecticut in violation of that same 1906 act. 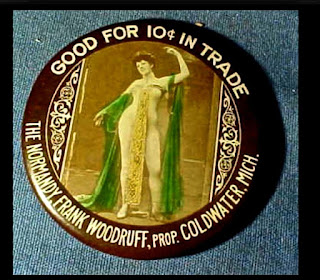 The next nude image is found on a celluloid pocket mirror issued by Frank Woodruff, the generous proprietor of the Normandy Saloon in Coldwater, Michigan. Note that Woodruff not only gave away this trinket but it was good for 10 cents in trade at his bar. The figure is in a highly unusual pose.  She apparently is nude but with drapery on both shoulders and a strip of cloth down the front, hiding her nether parts. 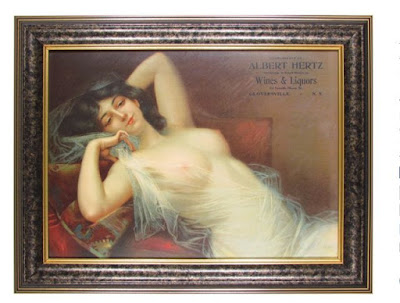 The final exhibit is a saloon sign “par excellence.”  It has all the classical attributes of a salon painting with the raw licentiousness that would make the clients of Albert Hertz of Gloversville, New York, anxious to hang on their walls. Hertz was a dealer in liquor and wine in the pre-Prohibition era.  The sign is believed to date from around 1905.

There they are, ten women in all their loveliness, some clothed, most not so.They appeared on a range of advertising items, from pocket mirrors to saloon signs — all with a single purpose:  To catch the eye of the (male) beholder and sell him whiskey.

Posted by Jack Sullivan at 6:09 AM No comments: