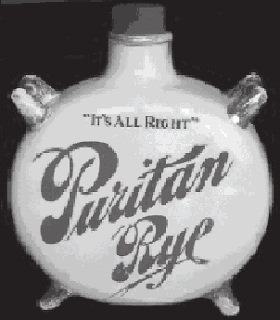 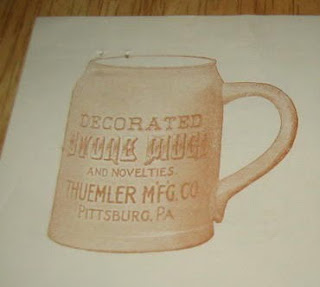 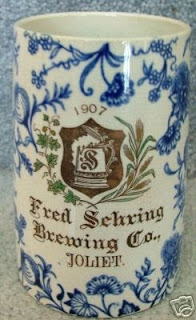 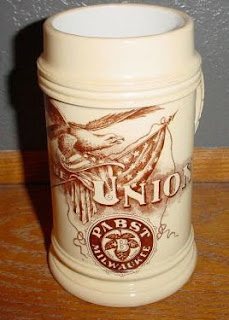 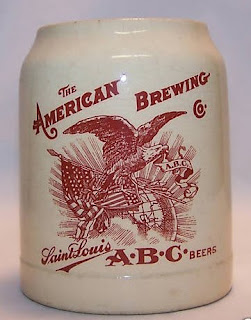 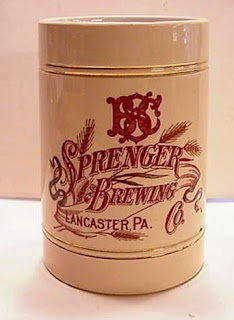 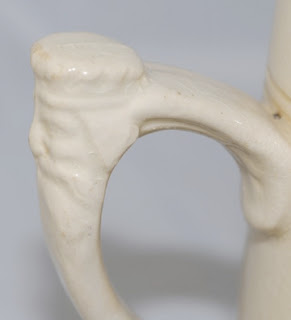 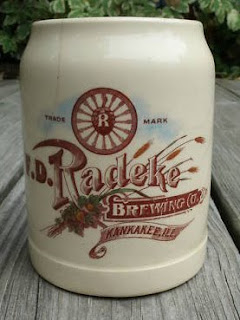 In the early 1980s as a collector of ceramic whiskey jugs, I bought a canteen-shaped porcelain bottle advertising Puritan Rye, a whiskey from D. Sachs Company of Louisville, Kentucky. On the base was a round pottery mark for the Thuemler Manufacturing Company. It took me more than 20 years to research this firm and its founder, Hugo Thuemler.

During the hunt I discovered something quite unexpected. Thuemler made only a limited number of whiskey jugs -- perhaps as few as four -- but designed and produced scores of different beer steins and mugs for the American brewing industry. He also created them for root beer makers, fraternal groups, tourist attractions, and conventions. Because the company ceased with Thuemler’s death in 1908, every one of these ceramic drinking vessels legitimately can claim the status of antiques.

Hugo Thuemler was born in 1847, almost certainly in Germany. During his youth German manufacturers had developed a process of transfer printing that allowed more mass production of decorated steins. Exactly when Thuemler arrived in the U.S. is unclear, but he brought with him the Old World knowledge of decorating both pottery and glass.

In 1894 when he was 45 years old, he is recorded as living in Rochester, Pennsylvania, a town not far from Pittsburgh. His occupation then was listed as “salesman.” Four years later an area directory carried a notice for the Thuemler Manufacturing Co., a business that described itself as a “manufacturer of novelties, decorators of china and glassware,” This theme was repeated in its billhead. A number of early Thuemler items carry a Rochester mark.

By 1901 Hugo had relocated his operations to the Pittsburgh suburb of Sewickley where he employed a number of skilled decorators. He also maintained a second address, probably a sales office, in Pittsburgh. Subsequently his wares bore a “Pittsburg” (the official spelling for a short time) pottery mark.

Thuemler’s firm filled an evident need for American breweries. In the past decorated advertising mugs and steins had to be ordered from German suppliers with added cost and delay. Hugo’s ceramics, some of them shown here, solved that problem. I am particularly fond of the blue and white stein produced for the Fred Sehring Brewery of Joliet, Illiniois, and the patriotic themes created for Pabst of Milwaukee and the American Brewery of St. Louis. The handle of many steins, like the one from Sprenger Brewing, featured a ceramic portrait of King Gambrinus, the mythical German king who is the unofficial patron of beer and brewing.

Although earlier it appeared that Hugo Thuemler appears to have lived a bachelor’s life, information has come to light in 2015 indicating that he may have had a wife and daughter.  Further, there is some evidence that he kept a residence in Berlin.  In Sewickley, we know he lived at the Elmhurst Inn, a boarding house that originally was a private mansion. According to a newspaper obituary Thuemler died there on September 1, 1908, at the age of 61. Cause of death was listed as “acute indigestion.” After Hugo’s demise, production ceased and all references to the firm disappeared. More than a century later, however, Thuemler items are being avidly collected and prices have risen steadily.

For a decade or more I have kept an ever-growing list of Thuemler products that have come to my attention. It now numbers some 90 marked items and an additional few that are unmarked but may be attributed to Thuemler. The list does not contain prices. Anyone wishing a copy may write me enclosing a self-addressed stamped envelope: Jack Sullivan, 4300 Ivanhoe Place, Alexandria VA, 22304.
Posted by Jack Sullivan at 6:06 AM 4 comments:

A Peek at the "Eye of Providence" 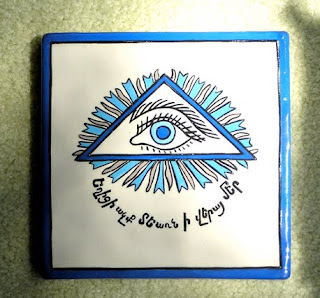 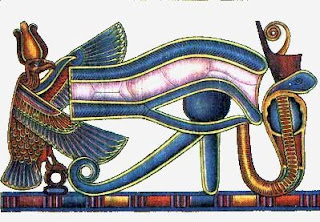 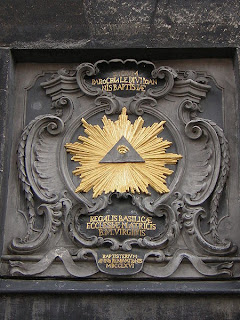 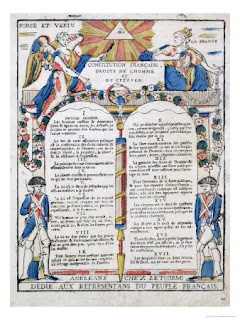 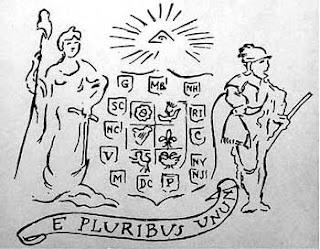 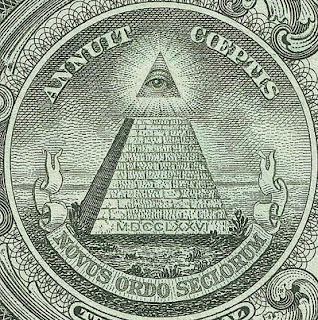 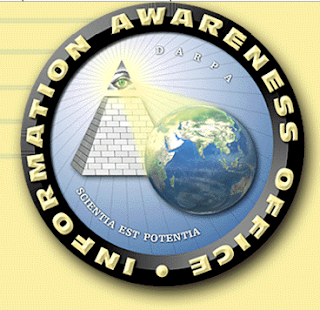 Always finding ceramic tiles of interest, I was impelled to buy one recently on a business trip to Armenia. As show here it is dominated by a single eye in a triangle surrounded by blue and gold rays. The ancient Armenian script at the bottom could not be translated by the shop proprietor but she told me that the import of the tile was keeping away the “evil eye.”

Well, yes and no. Actually this image generally is known as the “Eye of Providence,” representing the ability of the Almighty to see and know what is happening in the world, and -- even more important -- what will happen in the future. The roots of this icon go back to ancient Egypt where the eye of Horus, a god of the Sun and Moon, was frequently displayed and known as a “wedjat.” The single “all seeing” eye was, for example, the central element of seven priceless gold, fiance, carnelian and lapis lazuli bracelets found on the mummy of Pharaoh Shoshenq II and shown here.

With the coming of Christianity, the eye came to be surrounded by a triangle, representing the Trinity and generally was depicted with rays of celestial light radiating from it. An excellent example is found on the Aaachen Cathedral in western Germany, the oldest cathedral in northern Europe. Begun in 786, Charlemagne is buried there. The Constitution of France that includes the famous Rights of Man traditionally has radiated at the top a similar eye symbol.

Most notably the Eye of Providence has found its place in the New World as a standard element of the one dollar bill. On the back of the bill are two circles. Together they comprise the Great Seal of the United States. The eye is on top of a pyramid and above it the Latin for “God has favored our undertaking.” It represents the long and somewhat tedious effort by the Continental Congress, immediately following the Declaration of Independence, to create a seal for the new and embattled nation.

The three chosen for the task were are familiar names: Benjamin Franklin, Thomas Jefferson, and John Adams. Although these were among the most distinguished Americans, none of them knew anything about heraldry. Led by Franklin, they turned to the artist Pierre Eugene du Simitiere, an expert and collector of all things American. Du Simitiere turned out a sketch, shown here, that no one --except the Big Three -- liked. Note that the eye appears in the design.

Not until years later was a seal approved by Congress. Through the leadership of Franklin, the Eye of Providence became a part of the Great Seal. Over ensuing years its presence there has stirred many interpretations and much speculation about its meaning. A recent movie entitled “National Treasure” starring Nicholas Cage has as major premise that the eye is a key to unlocking secrets about a treasure stash. It is also has been linked to the use of an all-seeing eye in Masonic rituals. Evidence is, however, that the Masons adopted the eye as a symbol only after approval of the Great Seal. Note that the Masonic eye shown here does not include the Trinity triangle.

Through the years the Eye of Providence has found its way into other symbols. For example, it is part of the seal of the State of Colorado. Likewise the seal of the University of Mississippi. Very recently the Information Awareness Office of the Defense Advanced Research Projects Agency (DARPA) adopted the symbol as its own. That has engendered speculation that this semi-secret agency has adopted George Orwell’s warning that “Big Brother is watching you.”

Certain powerful images survive down through the centuries even as they take on altered uses and new meanings. The Eye of Providence must be counted among them. It surely has proven its durability as a symbol from ancient Egypt to the present times. If in doubt about that, take out a one dollar bill and look at the back.
Posted by Jack Sullivan at 4:12 PM 2 comments: