Seeing Whiskey Through a Reverse Glass 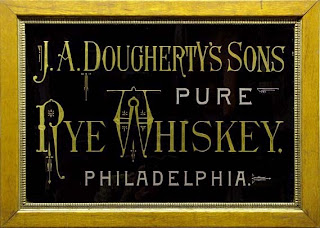 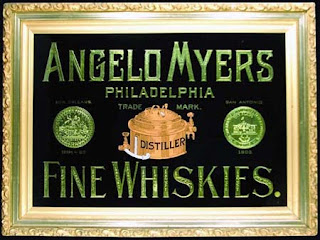 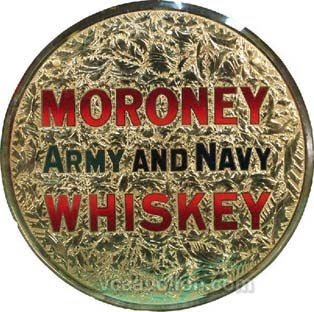 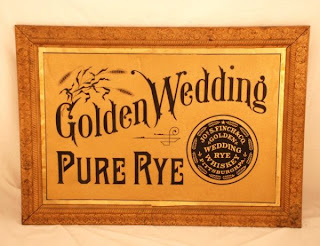 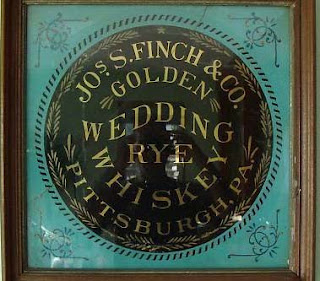 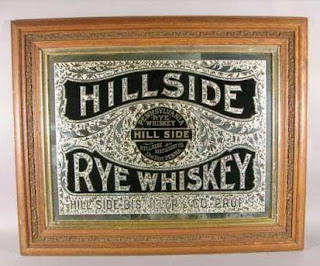 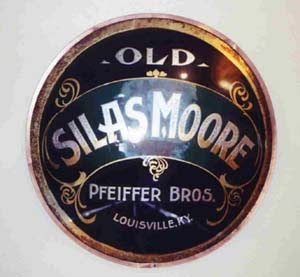 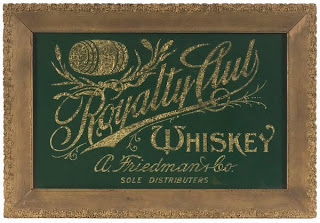 Reverse painting on glass consists of applying paint to the back of a piece of glass and then viewing the image by turning the glass over and seeing it through the glass. This art form has been around for centuries. It was used for sacral paintings in the Middle Ages and frequently was used for gilded images.

“Verre eglomise,” as the French call it, had something of a renaissance during the 1800s and early 1900s, used by both artists and by the fledging advertising community in Europe and the United States. Quick to see its commercial value in merchandising were American whiskey distillers and dealers. An attractive reverse glass sign in a saloon might entice more customers to imbibe their product.

I find these signs among the most attractive artifacts that the pre-Prohibition whiskey-makers have left to posterity. My favorite is the elegant “art nouveau” sign from John A. Dougherty’s Sons of Philadelphia. The elaborate “W” in “whiskey” is particularly decorative.

This distillery was founded by John Alexander Dougherty, a native of Ireland who arrived as a youth in Philly in 1814 by way of Halifax, Nova Scotia. Originally a baker, Dougherty eventually moved to making whiskey and in 1849 founded the distillery that bore his name. He had several sons who, upon his death in 1866, continued the business until Prohibition.

Pennsylvania was a state that seems to have fostered elegant glass signage. The second example, also from Philadelphia, is redolent with gold. It advertised a distillery founded in 1874 by Angelo Myers. Framed in gold, the sign also features two medallions that commemorate gold medals the whiskey had won at national expositions. This firm, with Myers father and son as presidents, survived 44 years before Prohibition closed its door. Quite unusually, two of four Myers’ one time corporate officers were women.

A third Philadelphia sign advertised the “Army and Navy Whiskey” from the James Moroney Co. A wholesalers and importer, Moroney founded his firm in 1875. Other brands he featured were “Moroney Pure Rye,” “Old Navy,” and “Round the World Scotch.” The company closed in 1918.

In Pittsburgh, the Joseph S. Finch & Co. was founded in 1873 to great success and made its “Golden Wedding Rye” into one of America’s best known brands of whiskey. It was responsible for two elegant reverse glass signs, one that screamed gold and a second that replicated its Golden Wedding logo. In this case, we know the identity of the creator of at least one of the signs. The back of the first, faint but visible, is written: John Golding Glass Sign, 240 Pearl Street, New York.

Although Hill Side Rye is advertised as being Pennsylvania whiskey, the brand actually was distributed by a New York City based outfit (1880-1918) known as Steinhardt Bros. There were four of them - Lewis, Henry, Morris and David. Together they forged a highly successful whiskey business. Not distillers, they collected whiskey from a variety of sources, “rectified” (mixed it) and sold it nationally and from outlets in New York under a number of brand names, including “White Lily Pure Rye,” “Emerald,” and “Lafayette Club.” This sign bears the signature of artist Thomas G. Jones of New York.

Unlike most of the distillers and wholesalers above, Pfieffer Bros. were relatively latecomers to the whiskey business, first opening their doors in 1902. Rectifiers and wholesalers, their glass sign features the firm’s flagship brand, “Silas Moore.” Pfieffer Bros. also sold their whiskey under brands names such as “Dixie Belle,” “Old Cornelius,” and “Tom Hudson.”

Pfieffer Bros. and the other whiskey companies cited above successfully were in business from the time of their founding until National Prohibition. This time spread makes it virtually impossible to date exactly any of these signs. Not so with the company that produced the final example shown here. “Royalty Club” was a brand name of the Anton Friedmann company in Cincinnati, Ohio. City directories first show Friedmann’s organization in 1870. By 1874 it had disappeared.

Although reverse glass advertising signs are still being made, many of them attractive, our legacy from the pre-Prohibition whiskey makers set an artistic standard that will be difficult to match--ever.
Posted by Jack Sullivan at 5:56 AM 1 comment: 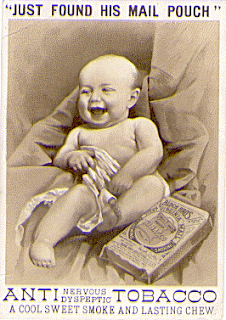 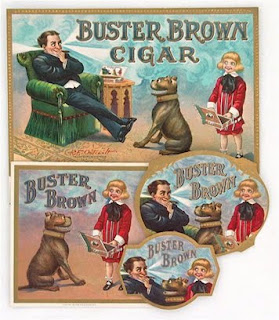 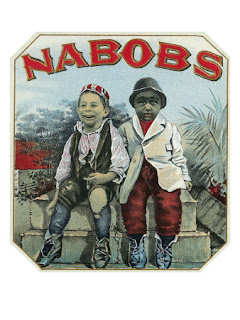 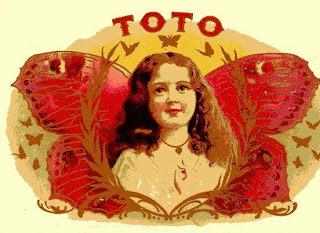 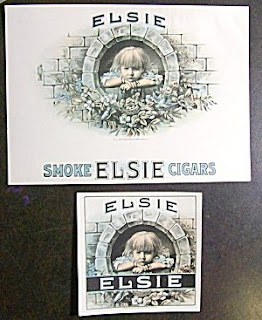 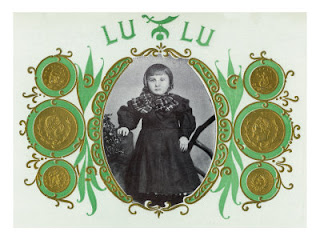 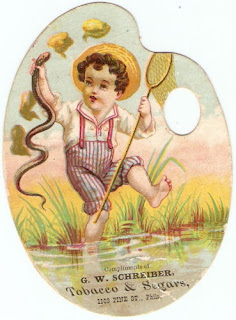 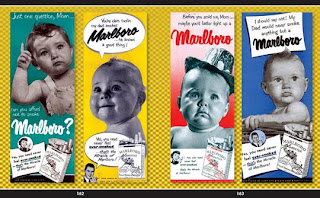 Last March my blog concerned the dubious use of children in order to sell whiskey through trade cards and ads. More recently I have become interested in the frequent use of youngsters, up until a few years ago, to sell tobacco products. The interest was kicked off by a 1890 ad for Mail Pouch chewing tobacco, shown here, that featured a laughing baby in diapers and the double entendre caption, “He just found his mail pouch.”

Perhaps West Virginia’ most famous consumer product -- one whose faded ads can still be found on thousands of barns across rural America -- the company began with brothers Aaron and Samuel Bloch, who ran a small grocery and dry goods store in Wheeling on the Ohio River. They also had a small cigar factory on the second floor. They conceived the idea of flavoring the scrap cuttings that were left over from the cigars and selling them in paper bags as chewing tobacco. Thus an industry was born.

The brothers had excellent marketing sense and built the company to national fame. Aaron was succeeded as president in 1902 by brother Samuel, who in turn passed the company along to his son, Jesse Bloch, in 1937. Jesse’s son, Thomas took over in 1947 until the firm was sold in 1969. Mail Pouch chewing tobacco is still being sold.

By using a baby to advertise their chew tobacco the Blochs were only emulating a wide range of tobacco manufacturers who used the images of children to sell their products. In a blog in June 2009, I related how Richard Outcault, the creator of Buster Brown, franchised several cigar makers to use his child cartoon character in their merchandising. One colorful label showed a man blowing cigar smoke from his ears, to the clear delight of Buster and his dog, Tige.

Subsequently I have found four more cigar makers using kids to flog their products. The most interesting are Nabob Cigars. Their box lid features a pair of boys, one white, one black, both in tattered or ill-fitting clothes. The white lad is smoking a cigar and clearly enjoying the experience. The black youngster seems to be wishing too he had a cigar.

Three other lids feature little girls and were sold under childish names. “Toto” seems to have sprouted butterfly wings. “ Lulu” is an preschooler with a shawl and heavy coat. “Elsie” is hatless and leaning on a well. Neither of the latter two looks particularly happy. Were these the children or perhaps grandchildren of the cigar makers? My research has found no answer.

A happier tobacco-selling tike was featured in a trade card by the G. W. Schreiber Co. of Philadelphia, a dealer in tobacco and “segars.” Why a tike catching an eel in a net should be considered an apt selling point for tobacco products escapes me, other than the general idea that images of children catch the attention of consumers.

These images, however, pale before a 1951 series of ads for Marlboro Cigarettes that ran in a number of national magazines. In them a series of super cute infants relate messages for both Mom and Dad. To Mom, the toddler had a question: “Can you afford not to smoke Marlboro?” And a second baby admonishes: “Before you scold me, Mom, maybe you better light up a Marlboro.” Dad got no questions, just approval for always smoking the infant’s choice.

Given what we know today about the dangers of smoking, these ads, particularly the Marlboro campaign of almost a half-century ago, may seem like something out of the Dark Ages. Today it would be unthinkable to merchandise tobacco using kids. But not so long ago....
Posted by Jack Sullivan at 2:01 PM No comments: