In the days before National Prohibition when women, at least respectable women, were barred from saloons, proprietors felt free to distribute trade cards advertising their establishments that often included “double entrendre” messages, often provided in verse.  Shown here are seven such offerings from watering holes across America and reaching into Mexico. 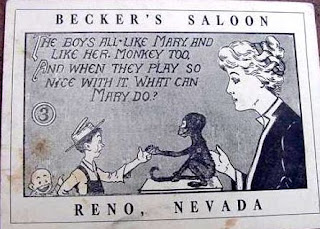 The first example comes from Becker’s Saloon in Reno, Nevada, a place where one might get a limburger cheese sandwich and a beer for 15 cents.  It was located in the Becker Building on Commercial Row in Reno and held the saloon, a restaurant and a card playing center.  Its trade card depicted a comely woman with a monkey shaking hands with a farm boy and reads:

The boys all like Mary, and
Like her monkey too,
And when they play so
Nice with it, what can
Mary do? 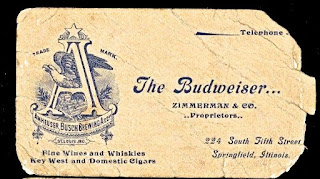 The 1911 city directory of Springfield, Illinois, lists almost three full pages of saloons, indicating that the competition for customers among them must have been fierce.  That may explain the number of trade cards from that city that carried suggestive poetry.   Zimmerman & Co. called its place The "Budweiser," a designation that suggests a “tied” saloon, that is, one that served only a single kind of beer in return for financial support from a brewer.  Its “poem” read:

With fond regret I now remember,
Those happy days of youthful fun,
When all my limbs were lithe and limber,
Did I say all?  Yes all but one.

Those glorious days have ceased forever,
The happy days of youthful fun,
All limbs are daily growing stiffer
Did I say all?  Yes all but one. 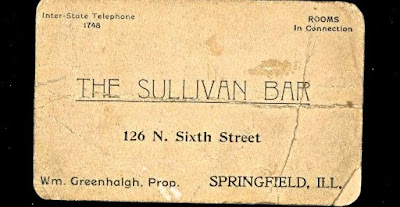 Another saloon was the Sullivan Bar on Springfield’s North Sixth Street.  But Sullivan was not there.  Instead the proprietor was another Irishman named William Greenhalgh.  Noting that Sullivan’s “thirst parlor” also had “rooms in connection” a question arises about what additional activities might have been going on there.  The verse on the card back side may give a clue: 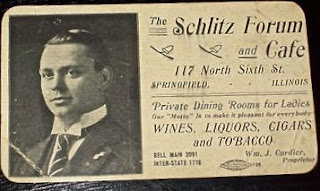 William J. Cordier, the cravated chap shown here and proprietor of the Schlitz Forum & Cafe, right down the street from Sullivan’s in Springfield, felt compelled to issue two risqué’ cards.  One of them contains eight suggestive quatrains, of which the following are two:

Here’s to the girl that dresses in the sailor hat,
Pink shirtwaist and white cravat,
Patent leather shoes and blue parasol,
And a little brown spot that pays for them all.

Here’s to the girl that dresses in black,
She alway looks neat and never looks slack,
But when she kisses, she kisses so sweet,
She makes things stand that have no feet.

Cordier also issued a second card that featured a story in verse about a fly that intrudes into a grocery store and, after defecating on a piece of ham, proceeds to elude the storekeeper and then:

When he had done his deadly work
He flew right over to the lady clerk
And up her leg he took a stroll
And took bath in her hole.

Proprieties deteriorate further in subsequent stanzas until the fly meets an untimely — and unseemly — death. 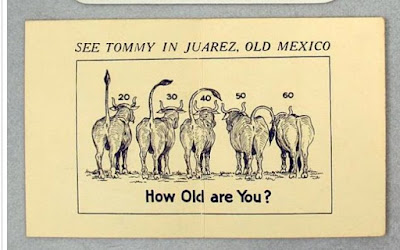 Tommy Sookiasian, an Armenian, was proprietor of a saloon in Juarez, Mexico, a short distance over the Rio Grande River from El Paso, Texas.  He issued a trade card that, while ostensibly involving cattle and their tails is meant to remind us of the deterioration in the male organ of generation as the years take their toll.  Tommy’s was a bar and cafe featuring a fish menu but also a wholesale liquor dealer. 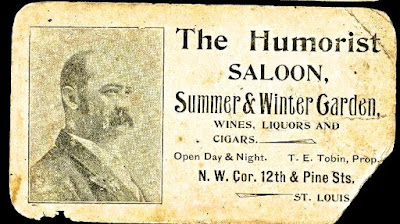 Contemplating the unusual name of “The Humorist Saloon,” perhaps it was the proprietor,  T. E. Tobin,  depicted on the trade card, who fancied himself a funny man.  His St. Louis watering hole seems never to have closed, being open”night and day.”  His rhyme on the reverse while not having sexual overtones, was laced with profanity, as per the stanza that follows:

Beer is a beverage,
That works upon the mind;
It makes men and women talk,
When they are not inclined.
It works like a figure,
And works without a rule,
And make people think they are smart
When they are a G—D—d Fool.

This is just a small sample of the artistic achievements left to the American lexicon by the Nation’s saloonkeepers.   Their contribution seldom receives attention, particularly in literary (as opposed to drinking) circles.  I am happy to remedy that omission here.

Posted by Jack Sullivan at 12:46 PM No comments: