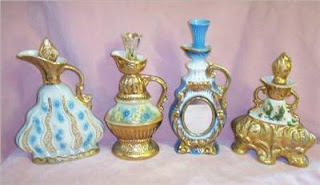 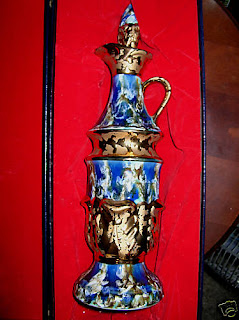 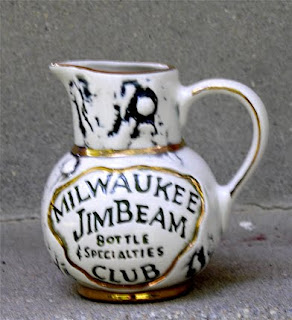 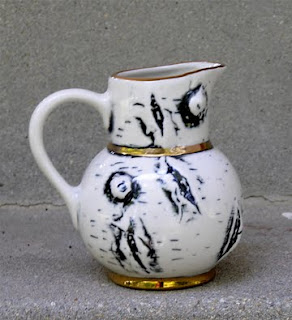 At the risk of seeming to “beat a dead horse,” I return to the subject of Beam bottles, specifically decanters in its self-vaunted “Executive” series -- a subject first raised in my posting on September 3 of this year.

Recently on eBay four decanters in the Executive Series, shown here, were offered as a group with bidding beginning at $9.99. From left to right, they were “Charisma” issued by the Jim Beam distillery in 1970, “Flora de Oro” from 1976, “Reflections” from 1975, and “Regency” from 1972. All were attested to be in excellent condition.

Researching the values placed on these decanters in recent bottle price guides, Charisma by itself was worth $15, although by 2005 the Antique Trader guide had reduced it to $4-7. Flora de Oro warranted a $12 value from both. Koval set Reflections at $13 and Regency at $12; Antique Trader valued them at $8-10 and $7-9, respectively.

Using Koval’s as a guide, the total value of the four was $52; for Antique Trader the total was $38. Yet the opening asking price on eBay was $9.99 or approximately $2.50 each. Even at that that give-away price, there were no bidders. Nobody in eBay’s national audience was interested even at a bargain basement price.

Recall that this series was touted by early Beam Bottle guides in glowing terms. A 1967 example of the hyperbole about the Beam Executives: “Decanters in this series are highly sought after by collectors today and will surely be tomorrow’s treasured antiques! Most everybody, even non-collectors it seems, cherishes these bottles. Consequently the empty bottles are very seldom seen offered for re-sale.”

I have only one Beam item, purchased more than 20 years ago. It is a small stoneware pitcher issued by the Milwaukee Jim Beam Club that imitates the bark of a white birch tree. I have kept it not because it will be “tomorrow’s treasured antique,” and someday hope to make a bundle on it, but because it is from a town to which I have emotional ties and because it has a highly unusual motif.

There is one final indignity to relate to Beam bottle collectors. The Executive Series quartet shown here subsequently was relisted on eBay. This time their owner asked $24 for the lot on a “buy it now” or “best offer" basis. Again, there were no takers. Once touted as tomorrow’s treasures, Beam decanters instead are today’s duds.
Posted by Jack Sullivan at 9:00 AM No comments:

Sherwood Brothers: Under the Radar 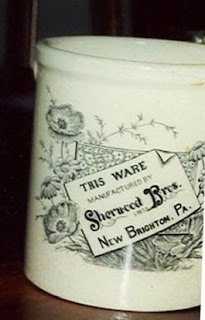 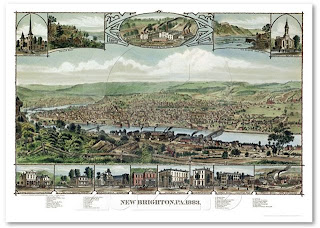 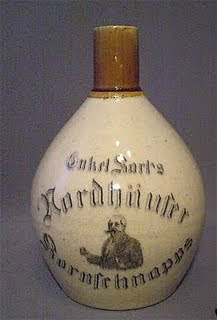 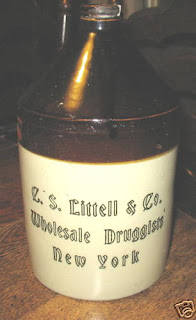 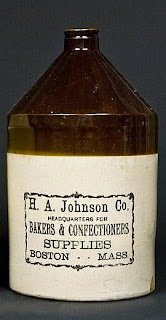 Almost two decades ago, I wrote an article entitled “Who Made America’s Whiskey Ceramics?” At that time I was convinced that most, if not all, of the fancy jugs and bottles were made in Scotland or England and shipped to our shores. Alan Blakeman, the leading guru on British bottles, disagreed. He argued that the U.S. must have had
pottery firms with the capability of designing and executing even intricate transfer designs. Alan was right.

I saw the proof for myself in 1998. It was a small stoneware crock, a salesman's sample for the Sherwood Bros. Pottery of New Brighton, Pennsylvania. Shown here in a detail, the crock is drawn with an elegance and precision equal to anything the “Old World” could produce. The ad copy on the item offers to provide underglaze transfer printed items of equal perfection to Sherwood Brothers clients.

With about 7,000 population New Brighton is nestled in the western Appalachian mountains not far from Pittsburgh. Founded in 1815 and shown here in an 1883 sketch, the town is situated on a bluff on the west bank of the Beaver River. Because of good clay sources in the region, the town spawned a number of ceramic manufacturers. About 1879, the Sherwood brothers, G.W. and W.D., founded their pottery. By 1895 they were employing as many as 140 workers and had the capacity to produce two railroad carloads of pottery per day. Their success extended into the 20th Century.

For most of its existence Sherwood Brothers had a highly skilled force of pottery workers and artisans. Unlike other American potteries of the time, this firm had mastered the art of the underglaze transfer. This process requires great skill and precision. Sherwood Brothers boasted of its “Sherwood Ware” as a “decidedly superior line, made up in a decidedly superior way.” Its transfer work, the company said, was accomplished “from fine designs cut in copper, bringing out patterns than cannot possibly be reproduced by a rubber stamp.” Stamping was a more commonly used, and cruder, method of inking a design or label on pottery. The firm bragged about its workforce: “Sherwood artists, experts who devote all their time to this work, are constantly producing some strikingly beautiful results.”

Because a major component of the firm’s trade was whiskey containers, the arrival of Prohibition in 1920 was serious blow to its business. This shock was compounded by the onset of the Great Depression a few years later. Business directories indicate that by 1931 the number of employees had dwindled to 40 and by 1935 was only 35. About 1939 Sherwood Bros. went out of business.

Other defunct potteries such as those in Red Wing, Minnesota; Knowles, Taylor & Knowles in East Liverpool, Ohio; and White’s of Utica, New York, have continued to attracted the attention of generations of collectors to their ceramic containers. Sherwood Brothers, perhaps because they did not always mark their products, consistently have flown below the collector radar. As America’s foremost transfer printing pottery of the 19th and 20th Centuries, they deserve a much better fate.
Posted by Jack Sullivan at 1:13 PM No comments: