This is the fourth post I have devoted to breweries that issue trade cards that reference well known operas and plays but substitute lines that extoll the sponsoring beer.  August Busch of the St. Louis Anheuser Busch Brewing Company appears to have initiated the advertising trend, to be followed by other beer-making organizations.

The Dick Brothers of Quincy, Illinois — Matthew, John and Jacob — looked down the Mississippi River about 140 miles and decided to emulate Busch and a brewery that was its major competition in the Midwest.   Rather than opera, the Dick family tended toward recreating Shakespeare. 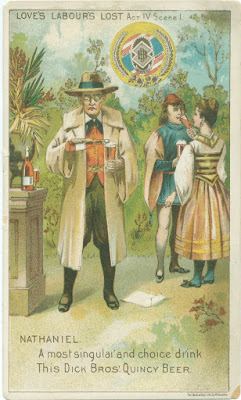 The first card shown here ostensibly shows Nathaniel, presumably the well-dressed and hatted gentleman in the foreground, downing a beer and intoning that Dick Bros. Quincy Beer is “a most singular and choice drink.”  It presumably is from Act IV, Scene I, of the Bard’s “Love’s Labor Lost.”  Unfortunately for the purposes of accuracy,  Nathaniel, as a pedantic clergyman in the comedy, does not appear in Scene I.  He does not show up until Scene II.  That inaccuracy, however, did not harm a similar card recently selling at auction for $50. 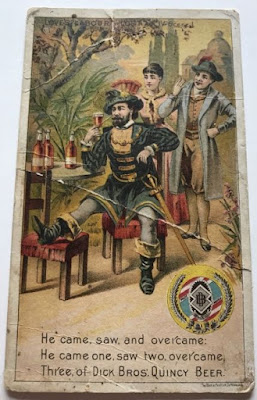 Whoever was advising the brothers on Shakespeare may have been sampling the product too freely.  The next card, also celebrating “Love’s Labor Lost” also is miss-identified.  Designated as from Act IV, Scene I, it apparently is meant to show the King of Navarre, who with his companions has sworn off marriage, relaxing with a beer.  He is having not just one, the caption tells us, but three Dick Bros. brews.  In case we cannot read, one of his companions is holding up three fingers.  Unfortunately, no comparable scene occurs anywhere in Act IV. 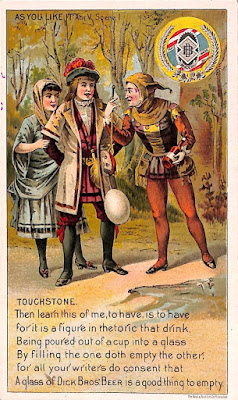 But whatever love the brewing brothers may have had for Shakespeare was not completely lost.  Their next card, from Act V of “As You Like It,”  is in sync with the playwright.   It depicts two women, royal cousins, who have been banished from court by the Duke.  Dressed as men they are escorted into the forest by Touchstone, the Duke’s jester.  In the original, however, the jester was not holding a bottle of beer. 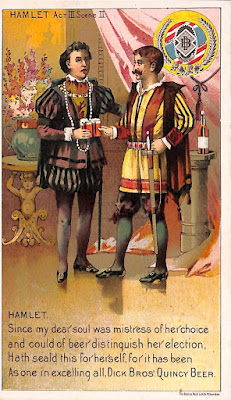 Nor does Shakespeare does indicate that Hamlet was having a beer with his friend Horatio as they planned to “out” the King as a murderer through the mechanism of a play, that is the gist of Act III, Scene II.  Forgetting the plot the Prince of Denmark here is rhapsodizing that his “dear soul was mistress of her choice” in selecting Dick Bros. Quincy Beer.

The flip side of the card carries a line drawing of the brewery, whose operations once were larger than Anheuser-Busch.  Founded by the brothers in 1857 in a small shack with limited output, by 1870 their facility had grown to 27 buildings covering nearly ten acres.  Its brewing kettle was so large it was contained in a five story building.  Prohibition and World War II brought hard times and the brewery declared bankruptcy in 1951 and the property was auctioned off. 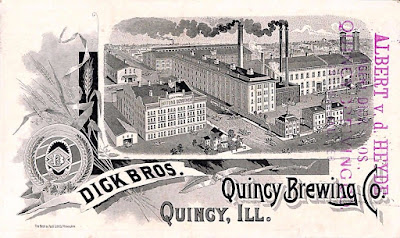 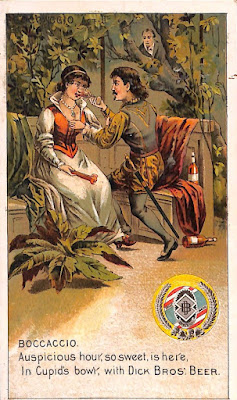 That fate was far in the future, however, when Dick Bros. issued its final card shown here.  It was from Act II of “Boccaccio,” an operetta in three acts by Franz von Suppe with German libretto, taken from “The Decameron” by Giovanni Boccaccio.  First performed in 1879, it would have been well known to the German speaking clientele of Dick Bros.  While seduction was a central idea, plying a woman with a glass of beer was unlikely.

Another brewery making use of the color lithographed cards with humorous captions was the Fulton Avenue Brewery of Evansville, Indiana, shown here.  This brewery, located at the corner of Fulton Avenue and Division Street, operated for more than 100 years, with “time out” for National Prohibition.  Over the years the company changed names and owners several times until 1997 when it was forced to file for bankruptcy and the main building razed the following year. 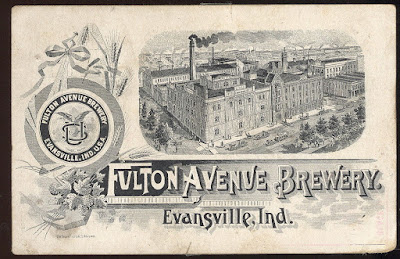 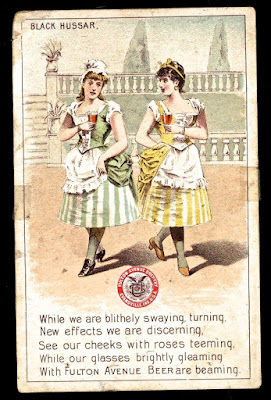 I can find only one trade card from the Fulton outfit.  It spoofs a German operetta in three acts by Carl Millocker, in English called “The Black Hussar,”  that had its first performance in Vienna in October 1884.  The operetta played for the first time in the U.S. in 1885 at two New York City performances, one in German and the second in English.  The setting is an army post at the time of Napoleon’s advance into Russia, 1812-1813.  None of this is evident on the trade card.  Instead we see two comely young women sipping a Fulton Avenue beer and intoning doggerel verse. 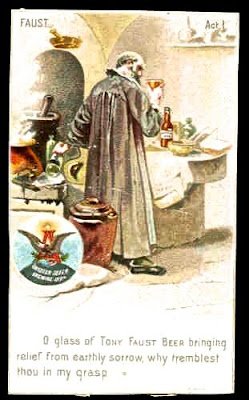 The last two cards are examples from Anheuser Busch that have not appeared in my previous posts.  The first celebrates Tony Faust Beer, a brand named for a St. Louis restaurant owner who was a good friend of August Busch.  Many Faust beer cards celebrate the central figure of Goethe’s story.  Instead of hesitating to drink a potion from the Devil that will give him his youth again (but damn his soul), this Faust is trembling over a goblet of beer that might give him indigestion, but little else. 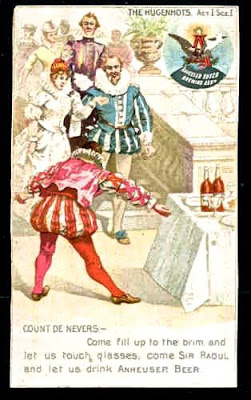 The final trade card here celebrates “Les Huguenots,” a grand opera by Giaome Meyerbeer that was five years in creation.  Introduced about 1832 in Paris, the work was very popular and was produced a number of times in the U.S.  The design is faithful to the story, showing the Count de Nevers, a Catholic, welcoming Raoul, a young Huguenot who has been sent by the King of France two reconcile the religious conflict.  In the opera the Count has copious supplies of wine brought to the table and urges Raoul to drink.  The card substitutes as a libation, Anheuser Beer.

Posted by Jack Sullivan at 6:01 AM No comments:

The Origins and Use of Nippon Whiskey Jugs 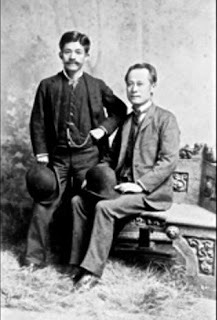 Reacting to the modernization begun during the Meiji Period in Japanese history, brothers Ichizaeon (left) and Toyo Morimura founded a company, later named Morimura Brothers with the idea of establishing overseas trading for Japanese products.  In the 1890s the firm shifted from retail to wholesale operations and concentrated on pottery and porcelain ware.  By 1901 the Morimuras were advertising as “The Company that makes Japan’s Finest China.”  As early as 1878 the brothers had opened a business in New York City, selling among other things, pottery.  These goods became known as “Nippon” and later “Noritake.”

Among other items the Nippon pottery featured Japanese-produced highly decorated European-style hard white porcelain jugs, holding about a quart of liquid.  Although more expensive than ordinary American salt-glazed ceramics, the elaborate designs insured that these items would not be tossed away.  Accordingly they were bought by American distillers and liquor wholesalers to gift their very best customers, likely saloons, hotels and restaurants. 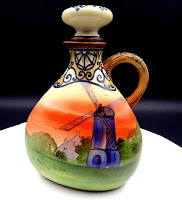 Evidence of European influence can be noted on the several jugs that carry motifs redolent of Dutch pottery.  Shown here with a Netherlands aspect are two scenes with windmills and below, a boy and a woman wearing a Dutch bonnet, walking a dog.  Each one of these ceramics would have been decorated by hand in the Morimura’s factory. 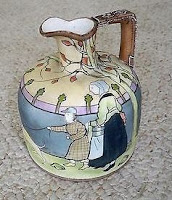 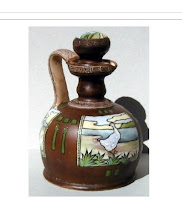 The European touch also is evident in a jug featuring a monk smelling a flower, monks being a common subject for spirits jugs in countries like Germany, Austria and France.  Country scenes, a staple design for porcelain containers manufactured by Continental potteries, also were imitated.

The Morimuras could authorize more exotic themes.  The vessel at left with its delicate scroll work and lack of any illustration bespeaks an Arabic origin.  Egypt clearly was the influence on the second jug, showing palm trees along the Nile River while the pyramids appear on the horizon.  The jug below left with its vivid colors limns a picturesque scene has a distinct Asian flavor.  The round door  in the wall reminds me of similar entrances in China. 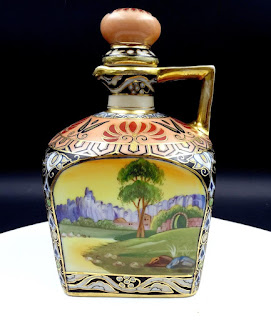 The only Japanese flavored Nippon ceramic I have found features horsemen whose mounts have the angular heads and bodies typical of Japanese equine depictions.

Which American whiskey producers used these jugs is largely unknown.  When given away almost all would have carried a paper label identifying the source.  It quickly would have been washed away to reveal the full luster of the ceramic.  An exception is the jug and closure, shown below, that bears the name of E. M. Higgins and his “Old Velvet” brand of whiskey.  Higgins was a successful Rochester, Minnesota, grocer and liquor dealer, who gradually became engaged in several other economic ventures. 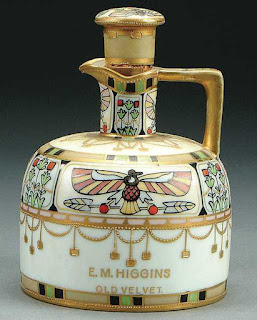 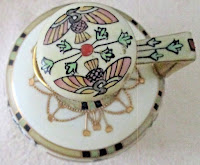 In 1901 Higgins sold the business he had run so successfully for twenty years.  The buyer was the Gucker family of Rochester, led by William J. Gucker, who may have been a bookkeeper for Higgins.  Shown here, Gucker became the secretary, treasurer and general manager of what continued to be named the E. M. Higgins Company.  The enterprise continued to be a highly profitable one, which brings us back to the Nippon jug. 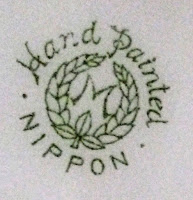 The pottery mark on the base of the ceramic, according to experts, dates it after 1911, meaning that not Ezra Higgins but Gucker was responsible for commissioning the jug from the Morimura Brothers.  In so doing, Gucker may have been appropriating the name “Old Velvet.”  That brand had been registered with the U.S. Patent Office about 1891 by the J & G Butler Company of Columbus, Ohio.  The trademark did not deter copycats.  As many as seven other liquor houses across America also used the name, perhaps under license from the Butlers, but more likely not.

The U.S. market for whiskey containers disappeared with the advent of National Prohibition in 1920, meaning that most of the jugs shown here are 100 years old or approaching that age.  As such, they are antiques and the prices they receive at auction reflect their relative rarity.  They sell from $200 to $600 at auction.

Posted by Jack Sullivan at 7:20 AM No comments: