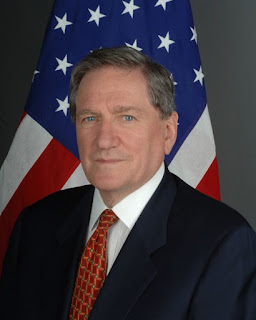 He liked to be called Richard Holbrooke, but I never called him anything but “Dick.”  We had adjoining offices on the Fifth Floor of the State Department from 1978 to 1981, both of us as Executive Level 4 federal officials, he as Assistant Secretary of State for East Asia and the Pacific and I as Assistant Administrator of USAID for East and South Asia and the Pacific.

Those days were brought back to me forcefully by a new book from author George Packard entitled “Our Man, Richard Holbrooke and the End of the American Century.”  Having read the book over the past several days I am emboldened to put down my own memories of this accomplished American diplomat.

We first met during the early 1970s when I was a staff consultant for the U.S. House of Representatives Committee on Foreign Affairs in Asia on assignment to review the operations of the Peace Corps.   Holbrooke at that time was the Peace Corps director in Morocco but sent to Asia on Corps business from time to time.  We encountered each other in a waiting room of the Djakarta, Indonesia, airport and began to chat.   All flights had been grounded in anticipation of the air arrival of President Suharto and our conversation stretched into four hours during which we found ourselves in general agreement on Peace Corps, the Vietnam War and other topics.

Fast forward five years and the election of President Jimmy Carter.  Holbrooke had been named Asia and Pacific secretary, the youngest ever to hold that position, and I had been nominated for USAID’s Asia Bureau.  The only question was my future office, with the most desirable one overlooking the Lincoln Memorial.  Although I had not seen him since Indonesia, Holbrooke intervened, declaring that my office should be adjacent to his to facilitate close communication.  That turned the decision and I was assigned the prime location. 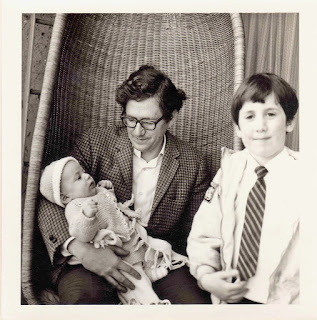 Not long after, Dick called me on the day of his swearing into office to ask a favor. After the ceremony, he asked, could I take his two sons, David and Anthony, to lunch in the State Department cafeteria and bring them back to the celebration he was planning in his office.  Recognizing that he only recently had undergone a divorce and no mother would be present, I readily agreed.  At lunch I found Holbrooke’s sons withdrawn, almost sullen.  Subsequently, David has revealed that his father was in the habit of dropping off the boys — uninvited and unannounced —at the homes of friends just to be free of them for the day.  Then I understood their unease with me.

During the four years we served together in the Carter Administration, Dick and I never had a disagreement.  On one or two occasions he had an project he wanted to pursue with USAID money in an Asian country.  After reviewing his proposals I found them to be good ideas, allocated the funds, and they turned out to be productive.

Most of all, however, I remember Holbrooke’s unwavering support for my central effort at USAID.   Famine 1975!  America’s Decision:  Who Will Survive? was a 1967 best selling book by brothers William and Paul Paddock.  Population had outrun the feeding capacity of the world, they claimed.  As the world’s leading food producer, the Paddock’s urged, the U.S. should practice a “triage” system leaving behind, apparently to starve, countries like India and Egypt. 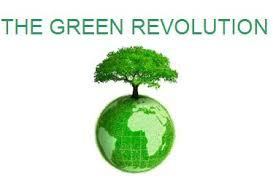 Their predictions ignored developments in agricultural science that were making great strides in developing new strains of wheat and rice in association with chemical fertilizers, pesticides, controlled water-supply, and new methods of cultivation.  As these agricultural methods advanced in the 1970s, they became known as “The Green Revolution.”  Because the threat of famine was still a concern in 1977, along with officials of the World Bank and other developed countries,  I concentrated as much assistance money as possible, ultimately reaching close to $1 billion a year, to spreading the Green Revolution to the smallest farmers throughout Asia.

In this effort, I had Dick Holbrooke’s unrestrained support.  In our meeting he expressed his deep concern about the possibility of people starving from a world-wide shortage of food.  In the end, the concerted international effort was successful.  The famine predicted by the Paddocks was averted through the instrument of the Green Revolution and its adoption.  Packard refers to Holbrooke as a “humanitarian” and I found him so.

The author, however, does not hesitate to detail Dick’s unbridled ambition, his betrayal of friends, his power struggles, and his sexual liaisons.  Much of this history was revealing to me, having only my four year experience to guide my opinions.   Although Holbrooke favored the war in Iraq, a mistake he later acknowledged, he will be best known for negotiating the Dayton Accords that brought a measure of peace and stability to the Balkans.  Some thought he should have won the Nobel Peace Prize. 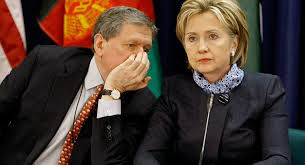 When he died in 2010 at the age of 69, Holbrooke was a special envoy to Afganistan and Pakistan, attempting to bring that long running regional conflict to an end.  It is reported that as Dick was readied for unsuccessful surgery for a severely torn aorta, he said to the doctor, “You’ve got to end this war in Afghanistan.”  To the title of humanitarian, I would add another, Dick Holbrooke was a peacemaker. Through all the chaff thrown up around his name, much of it of his own doing, he deserves to be remembered that way.

Posted by Jack Sullivan at 6:56 AM No comments:

Greetings on the Fourth of July

Not so very long ago it was the custom for people to send greeting cards — usually postcards — to family and friends on Independence Day.   These had a variety of themes, from highly patriotic, often involving the image of Uncle Sam, to political themes, and humor.   Many of them came from the workshop of Fred C. Lounsbury (1857-1917) and his Crescent Embossing Company of Plainfield, New Jersey.  Shown here are a sampling of ten Lounsbury July 4 postcards. 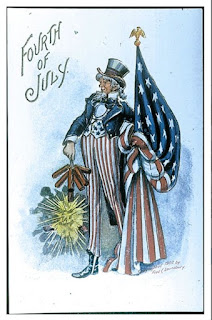 Although Lounsbury’s name appears on many of the cards issued from Crescent Embossing, he was not an artist but an entrepreneur and advertising specialist who directed the output of his firm that produced calendars, labels, advertising items and, beginning by 1907, topical postcards.  Several of my favorites have unintended humorous aspects.  Note the one at right.  Uncle Sam, draped in a flag, seems likely to have his pants singed or worse from the firecrackers exploding at his right leg.

I also find humor in the card of Uncle Sam gazing from a window at a group of boys firing off a cannon.  Sam undoubted is proud of the youths, terming them “free and independent.”  He seems unaware that the cannon is not aimed in the air but level with the ground.  What are they aiming at?  Maybe the Trump White House. 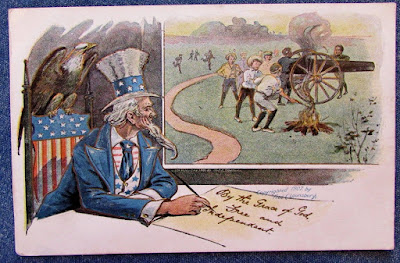 Several Lounsbury cards for the Fourth contain memorials to famous Revolutionary War battles.  Uncle Sam is absent here in favor of cameos of George Washington and General John Sullivan (no relation) celebrating the victory at Trenton over the British redcoats and the Hessian mercenaries in December, 1775, Washington’s first major victory. 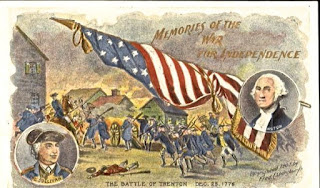 Another in the battle series hailed the victory at Yorktown in October 1781, the last battle of the war for independence.  Lord Cornwallis, the defeated general is depicted, looking foppish in his heavily braided uniform.  No mention is made of the French marines and French fleet that made the victory possible. 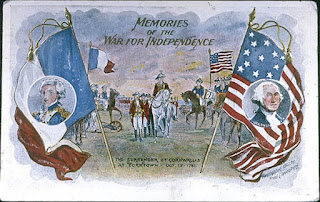 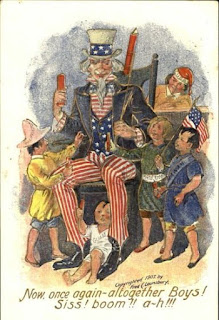 The card at left celebrates a later conflict, the Spanish-American War.  Here Uncle Sam is showing off Independence Day fireworks, surrounded by five children.  Four of them represents one of the territories wrested from Spanish rule:  Philippines, Cuba, Guam and Puerto Rico; the fifth, Hawaii.  All but Cuba would become possessions of the U.S.   The Philippines would eventually be given its independence.

The Lounsbury cards could also carry a political message.  The proprietor seems to have been a fan of President Theodore Roosevelt, showing him in his “Rough Rider” outfit from the Spanish-American War.  Driving a stars and stripes race car, Teddy assures a terrified Uncle Sam that:  “Don’t be afraid Uncle - We’ll get there all right.”  No idea is given, however, of the destination. 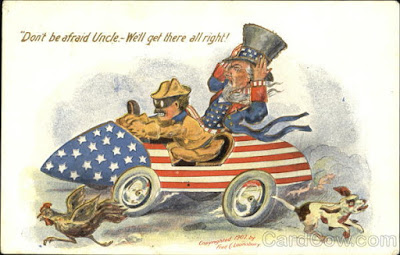 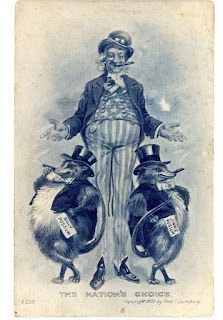 Another political card is also subject to interpretation.  It shows a fat bellied, cigar smoking Uncle Sam looking more like a genial robber baron than a symbol of American democracy.  He is contemplating two top-hatted, cigar smoking animals, identified as “Billy Possum” and “Jimmy Possum.”  They are presented as “The Nation’s Choice.”  The allusion is to the Presidential election of 1908 that pitted Republican William Howard Taft (“Billy”) against Democrat William Jennings Bryan (“Jimmie”).  The card seems to equate the two, although their views differed sharply.  Taft won with 51% of the vote. 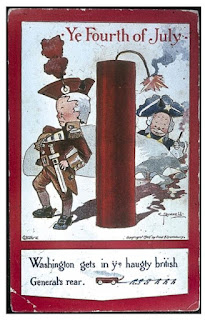 The final set of Fourth of July cards are meant to be humorous.  The artist on all of them may be Charles Bunnell (1897-1968), an American painter and printmaker known for his ability to adapt to all popular styles from abstracts to realism and in this case, apparently cartooning.   Bunnell, who must have been in his teens when these were drawn, has fashioned all these cards in a manner reminiscent of the Hearst papers cartoon, “The Yellow Kid,” drawn by Richard Outcault [See my post on Outcault June 13, 2009.]   The first has an odd-looking George Washington lighting a fire cracker under a British general. 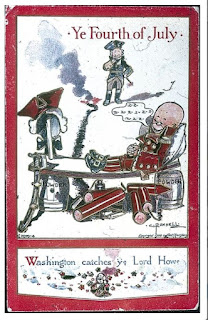 The next British general to be caught unawares by Washington was General Howe, the commander of His Majesty’s troops in the American colonies during much of the Revolutionary War.  The artist has him snoozing as all around him are explosive materials that are lighted and will soon blow him away. 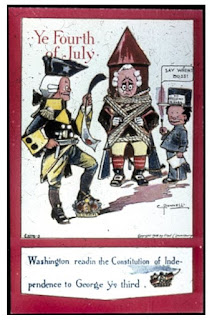 A rather different looking George Washington, standing on the crown of King George III, is purportedly reading from the Constitution [read “Declaration” ] of Independence to a highly distressed monarch who is strapped to a giant rocket.  A small boy with a lighted taper is remarking to Washington, “Say when boss!”  Note particularly the small hatchet in Washington’s belt, a reference to the cherry tree fable.

Although sending postcards at the holiday has gone out of style, the importance of the holiday is undiminished as a reminder of the many blessings of liberty we enjoy in the United States.  Fred Lounsbury understood that more than a hundred years ago and, as one writer has put it “...He truly excelled when it came to the Fourth of July.”

Note:  Factual material about Fred Lounsbury and some images were taken from an article entitled “Lounsbury’s 4th of July Postcard Sets” by Fred Nuhn that appeared in the Antique Shoppe newspaper, dated July 2005.

Posted by Jack Sullivan at 6:14 AM No comments: