John Lobmiller and the Whiskey Shakes 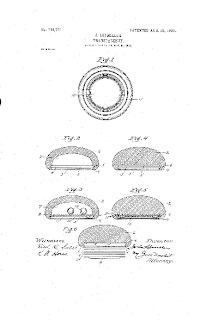 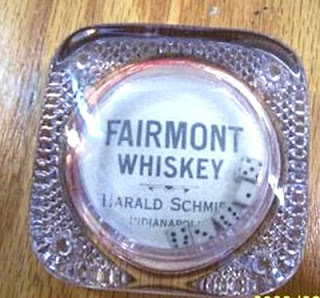 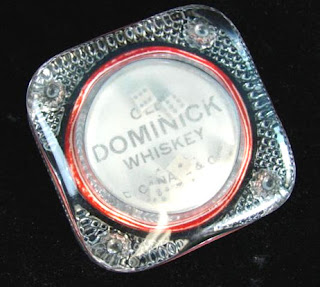 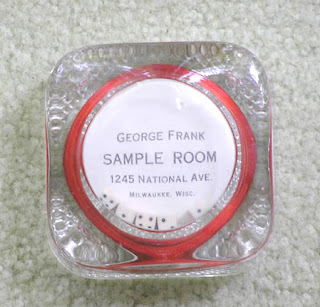 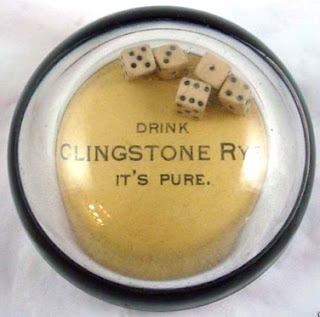 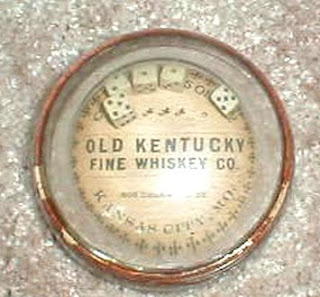 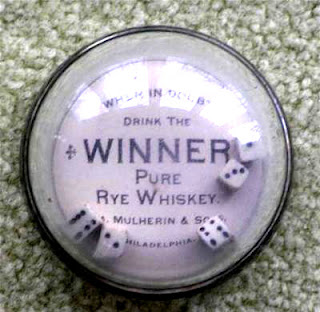 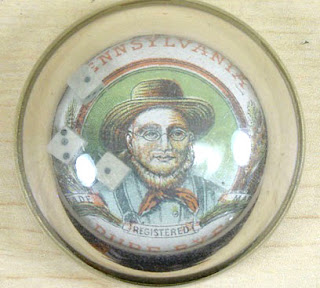 John Lobmiller was a glassmaker and inventor from Wellsburg, West Virginia, whose most memorable contribution to mankind may well have been a paperweight that contained shakable bar dice.

In 1885, together with other Wellsburg investors, Lobmiller founded the Venture Glass Works in that Ohio River town. According to an 1886 newspaper account. the glassworks specialties were brown flint glassware and private mold work. The article praised the operation: “These works are operated with natural gas, and while the establishment is not quite so large as some others, the work turned out is equal to those of more metropolitan pretensions.” The enterprise apparently succeeded to the extent that Lobmiller would marry Cora Nelson of Wellsburg in 1898.

As an inventor, Lobmiller had a number of ideas to improve existing tools and artifacts. In 1901 he filed with the U.S. Patent and Trademark Office an application to make a new kind of paperweight. Most weights of the time were solid glass with an image pasted or sealed in the base. Lobmiller created a paperweight of glass and metal with a cavity. His application noted that “moveable devices of circular or other form can be confined in the cavity....” Such devices, he noted, would add “novelty and attractiveness” to weights.

Two years later, on August 18, 1903, the U.S, Government issued Lobmiller his patent. There was an immediate interest in the invention from a source that Lobmiller may or may not have had in mind. Although his illustrations show small marbles in the cavity, whiskey dealers and saloonkeepers saw the open space as perfect for holding bar dice.

Shaking for drinks at the bar is an American tradition almost as old as the Republic. Patrons gamble against the bartender or against each other on who picks up the drink tab. Bar dice games typically are played with a set of five six-sided dice. Each player takes a turn rolling the dice either to outdo opponents or to accrue points.

Pre-Prohibition whiskey distributors like Harald Schmidt in Indianapolis (1903-1918) were quick to see the advantages of Lobmiller’s invention. The paperweight with dice would advertise Schmidt’s Fairmont Whiskey, reminding patrons of its availability behind the bar. In Memphis, Tennessee, Italian immigrant Dominic Canale had the same idea. He distributed five-dice paperweights to those saloons carrying his “Old Dominick” whiskey. Canale’s company (1885-1915) also featured brands, “B-Wise” and “Dominick Special Rye.”

On Milwaukee’s South Side, George Frank ordered up Lobmiller paperweights for his drinking establishment on National Avenue. His “sample room,” a high flown name for a saloon, is now the site of an apartment building. The base of all three of these weights bear the Lobmiller patent date. It is unclear but likely that they were fabricated at his Wellsburg glassworks.

In addition to the artifacts featuring a round cavity inside a square glass, a second Lobmiller patent variety was a broader, round paperweight. This is exemplified by the Clingstone Rye weight, shown here, one that also bears the 1909 patent date. This item was distributed by the Shiff, Mayer Co. of Cincinnati, in business from 1906 until 1911. Clingstone Rye was its flagship brand.

Lobmiller’s success almost inevitably drew copycats. Shown here are three whiskey weights, all probably from the same manufacturer and all bearing a “patent applied for “ designation. No evidence exists of a patent actually being granted, not surprising given how close the concept was to Lobmiller’s. Among the whiskey merchants making use of this “knockoff” were the Old Kentucky Fine Whiskey Co. of Kansas City, Missouri (1900-1902) and Winner Rye, the product of Wm. Mulherin & Sons, Philadelphia (1887-1918). A third was a weight advertising Pennsylvania Pure Rye. It is unusual because it features only three dice. This weight was distributed by Buffalo, New York, whiskey rectifiers known as C. Person’s Sons Company (1850-1920).

Despite the interesting legacy of whiskey memorabilia that John Lobmiller made possible, his own life apparently was plagued with difficulties. He committed suicide in Wellsburg in 1913. An obituary in a glassworkers trade paper cited “business troubles” as the cause. 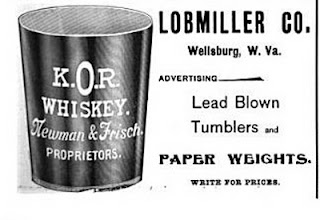 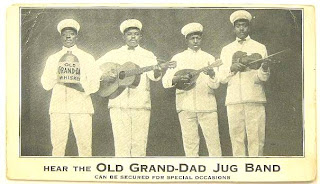 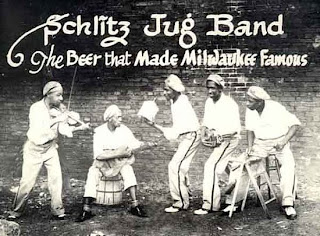 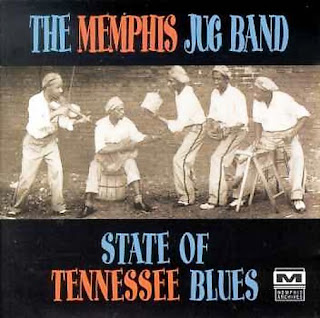 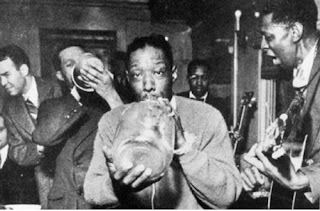 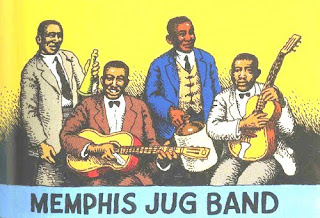 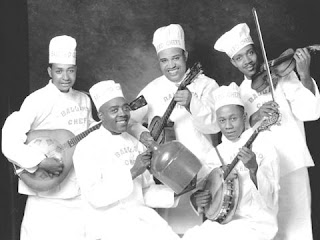 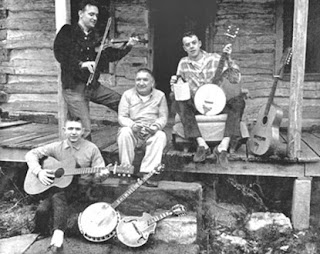 As the Marty Python crowd used to say, “Now for something completely different.” Well, not quite. This blog is mostly about bottles and booze and a post about jug bands fits both. For example, the Old Grand-Dad Jug Band, shown here on a early 1900s post card, was an advertisement for whiskey.

The names of this ensemble are lost in history but the brand they were merchandising lives on. Old-Grand-Dad bourbon was the product of a Marion County, Kentucky, distillery founded by the Hayden family about 1785. A grandson, Raymond Hayden, took the operation into full-scale commercial production when in 1882 he built a distillery at Hobbs Station in Nelson County.

When Raymond died without heirs the distillery was sold. Over the years it went through several ownerships until Prohibition in 1920 shut the plant down for good. The brand name has continued to be perpetuated to this day, reputedly using the original Hayden formula. By employing a jug band to merchandise Old Grand-Dad in the pre-Prohibition era, the distillers were clearly appealing to an African-American audience. Early jug bands typically were black.

Their instruments were a mix of traditional: fiddle and guitar -- and homemade: washboards, tubs, and, of course, jugs. The last was essential. Its swooping sounds filled a musical niche somewhere between a trombone and a tuba. Usually stoneware and sometimes glass, a jug is played by buzzing the lips into the mouth to play low and mid-range harmonies in rhythm. Experts could achieve two octaves, controlling changes in pitch by altering lip tension.

Jug bands clearly had a certain commercial appeal. Schlitz, a nationally known Milwaukee beer of German heritage, issued a trade card for its five-man jug band. The brewery clearly saw this ensemble as a good marketing image for its sales of Schlitz in Africa-American communities. Like the Old Grand-Dad band, this one was left anonymous. A recent CD release uses the same picture on the cover, however, and identifies the group as the Memphis Jug Band, one the most famous of the genre.

This ensemble was organized by singer-guitarist Will Shade. Born in Memphis, Tennessee, he lived there virtually all his life until he died in 1966. Other members of the band over the years included Ben Ramey, Charles Polk and Will Weldon. Between 1927 and 1934 the group recorded nearly 75 musical numbers whose up-tempo rhythms continue to delight. The Memphis Jug Band also is shown here in a later photo and in a color illustration by the famous American illustrator, R. Crumb, himself a passionate fan of blues, jazz and early country music.

Not just alcohol fueled the use of jug bands in commercials. Here are shown five musicians, with a prominent jug, called the Ballard Chefs Jug Band. They were regulars on Louisville radio station WHAS-AM. It broadcast their weekly program from the 1920s through the early 1930s over the Eastern half of the United States, sponsored by the Ballard Flour Company Fiddler Henry Miles was the leader. The legendary Earl McDonald for three years (1929-1932) did vocals and extraordinary jug-blowing.

After a period of neglect, during the folk music fever of the late 50s and early 60s jug bands revived. Most of them featured white musicians. Shown here is the Jolly Joe’s Jug Band. It was founded by record collector and music impresario Joe Bussard. The jug being used by Joe’s band, a 20th Century cylinder of stoneware, seems mighty puny compared to the earlier bands.
Posted by Jack Sullivan at 7:15 AM No comments: