Foreword:  In 1908 the Robert Smith Brewery to promote its brand of beer commissioned Philadelphia painter and illustrator James Moore Preston to provide it with a series of works depicting pre-Revolutionary taverns and inns in or near the “City of Brotherly Love.”  Preston created twelve color lithographs that memorialized those early Philadelphia “watering holes.”  I find the pictures striking and believe they deserve preservation through this blog, along with some inkling of the histories of each tavern and inn.  Six were presented in Part 1, posted on April 14.  This post completes the series. 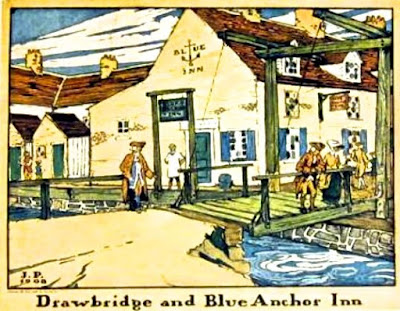 The Blue Anchor Inn on Front Street at Dock Creek was the oldest inn in Philadelphia, built in the decade between 1670 an 1680.  William Penn is said to have supped there upon his first arrival in the city in 1683.  Some believe that the Blue Anchor is the first structure built in Philadelphia.  The lumber is thought to have come over in the first ships to dock there.  The structure was timbered, filled in with small bricks and had the dimensions of twelve by twenty-two feet.  It has been called “the only public building” in the city for a time, a place where ship-masters, merchants and other citizens could gather. 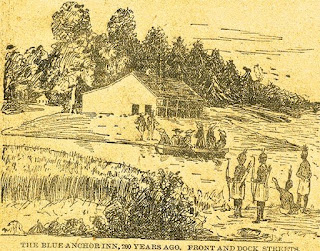 Where Preston got his model for the Blue Anchor is unclear.  A newspaper illustration of the tavern shows a somewhat different building, isolated on the shore and approached by row boat.  It depicts Indians with bows and arrow looking on.  The scene in Preston’s 1908 color lithograph shows a building of at least three stories with structure around it.  Because the contours of both are the same, my guess is that improvements over the years and the growth of Philadelphia around the tavern led to the changes. 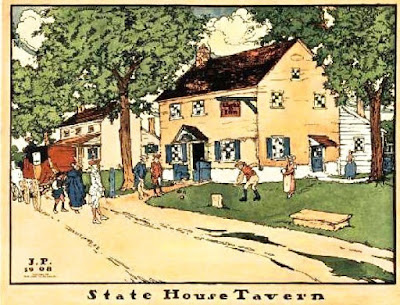 Although the brewery-sponsored picture entitles it the State House Tavern, because of its location across from the government center, this Chestnut Street drinking establishment also was known at various times as the Half Moon, Coach and Horses, and foremost as Clarke’s Inn.  “The table was good, and the inn became one of the chief centers of official activity.” 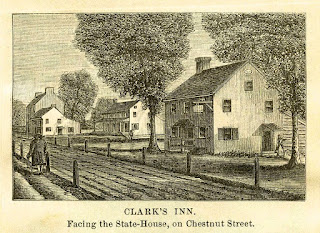 Although Preston’s picture gives the structure a jaunty look, including figures bowling on the lawn,  an earlier lithograph shows a much more austere Clarke’s.  Robert Smith, the namesake of the brewery, in his Journal relates that an apprentice had ruined his malt by over-heating:  “I being gone to the Half Moon for dinner.” 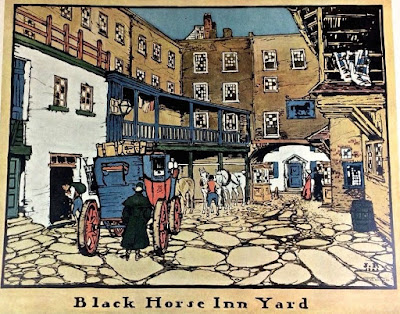 An advertisement in the Pennsylvania Packet of March 9, 1772, by owner James Alexander announced the Black Horse Inn, located on Second Street near Callowhill, calling it a “Commodious Inn of Entertainment” and convenient for market people.  He went on describe its livery stable as “good as any in the Province,” able to stable as many as fifty horses at a time and offering “a good yard for coaches, chaises,and wagons.”  Preston has caught much of this in his drawing, with a carriage and horses as major elements. 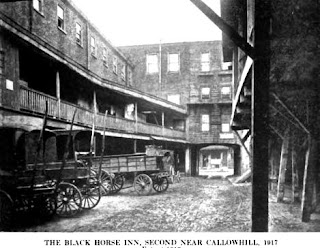 Although Anderson did not detail the kind of entertainment the Black Horse provided, another source has described it:  “In 1805 two live porpoises were exhibited at the Black Horse and the following year the learned African Horse, “Spotie,” which had a tail like an elephant’s and a knowledge of arithmetic. The same year two royal tigers from Surat in Asia and a living sea-dog, taken on the Delaware River near Trenton, were shown.”  Although the Black Horse did brisk business through the mid-19th Century, by 1917, as shown here, it had badly deteriorated. 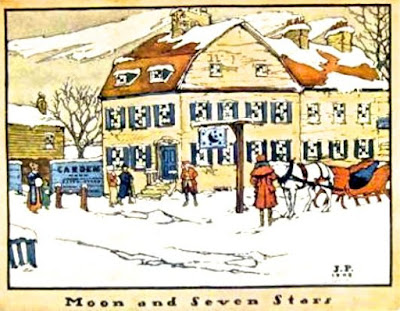 Depicted by Preston amidst a wintery scene, the Moon and Seven Stars, standing at the southwest corner of Fourth and Chestnut Street, was one of the best known inns of its day.  Standing between the Delaware River wharves and the State House, it served both the maritime and commercial communities.  In addition:  “Several clubs made it their meeting place, and all the leaders of American thought and action enjoyed the hospitality of its tap-room or its ordinary at one time or another.”  On the lithograph, the sign of the Moon and Seven Stars appears very small.  A reproduction captures it much better. 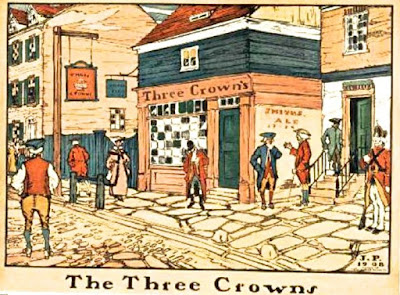 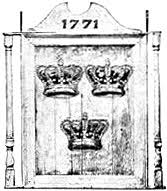 The Three Crowns was a public house famed for the good food set by its owner, a Mistress Jones.  It was housed in a two-story building adjoining the south end of the City Tavern (see Part 1).  It fronted on both Second Street and Walnut with a spacious courtyard that stretched to Dock Creek.  “At that house Richard Penn and other governors, generals and gentry used to be feasted.”  Mistress Jones’ tavern took its named from the sign of the Three Crowns. 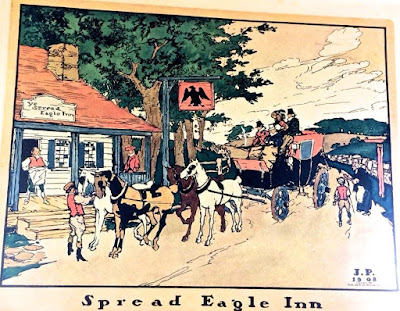 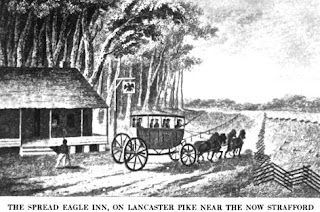 The final lithograph is of the Spread Eagle Inn.  It was located fourteen miles west of Philadelphia on the Lancaster Pike, one of the first turnpikes to be built in America.  The Spread Eagle was the first relay station and stage house west of the city.  Customers traveling on their way west as far as Pittsburgh would leave Philadelphia early in the morning and stop at the Spread Eagle for an ample breakfast.  Preston’s picture captures the moment of such an arrival as the proprietor stands in the doorway to welcome his guests.  The artist apparently took his visual clues from an earlier illustration, adding color and detail. 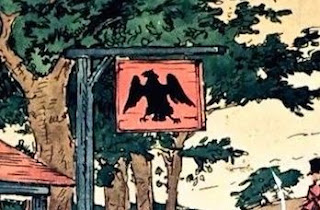 This building was replaced circa 1800 by a large stone tavern, also called the Spread Eagle.  About 1824, the hostelry was greet with controversy when the original signboard, shown here, was changed by a local artist who added another neck and head to the representation of the American eagle, leading to considerable “political excitement.”  Neighbors and wagoners could not see why “our glorious bird of freedom” should be altered into a European-like symbol.  The tavern was derided as the “Split Crow” by dissidents, causing the sign hastily to be repainted — “Americanized” once more. 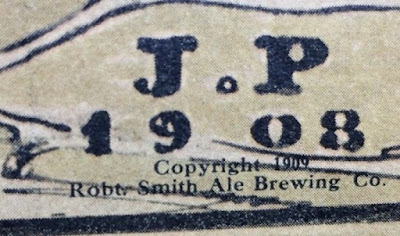 James Moore Preston’s colorful and engaging 1908 art works have allow a brief exploration of Philadelphia’s earliest and most historic inns and taverns, all of them but one long since disappeared.  The exception is City Tavern, seen in Part 1 of this series.  Another City Tavern has been reconstructed on the earlier site.  Said to be a replica of the original, the building appears to be significantly different from Preston’s representation.  In any case we can be grateful to the farsighted individuals for the Robert Smith Brewery who in 1908 commissioned these fascinating images to capture a bygone day.

Posted by Jack Sullivan at 10:12 AM No comments:

Foreword:  In 1908 the Robert Smith Brewery commissioned Philadelphia painter and illustrator James Moore Preston to provide it with a series of works depicting pre-Revolutionary taverns and inns in or near the “City of Brotherly Love” to promote its brand of beer.  Although  he has been considered a member of the Ashcan Group and exhibited in the famous 1913 Armory Show, Preston was an artist who could work in many modes.  Thus he created color lithographs that memorialized the founding of the Smith Brewery in 1774 and eleven early Philadelphia “watering holes.”  I find the pictures striking and believe they deserve preservation through this blog, along with some inkling of the histories of each tavern and inn.  Some of that information was provided by the Smith lithos — and that will be quoted.  Other material and illustrations are the result of my own research. 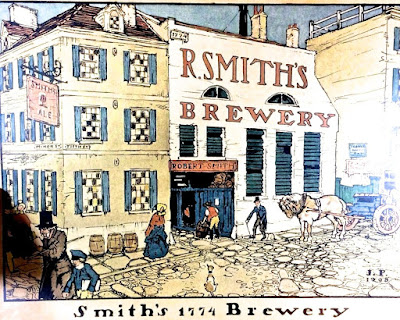 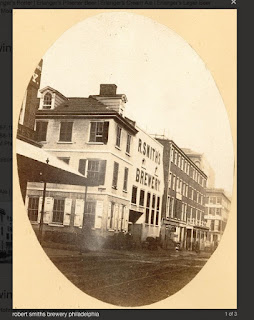 The first illustration here is of the original brewery in Philadelphia, owned by a man named Joseph Potts and later by Henry Pepper.  In 1845 he sold out to  Robert Smith who had come to America in 1837 from England after having served an apprenticeship with the Bass Brewery there.  He died at 86 in 1893 and the business was reorganized as the Robert Smith Ale Brewing Co., owned by Schmidt’s Brewery of Philadelphia.  Shown here as it looked about 1908, this was the brewing entity that commissioned the artworks. 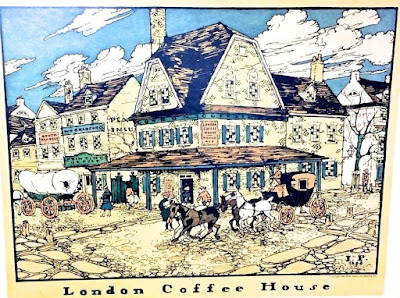 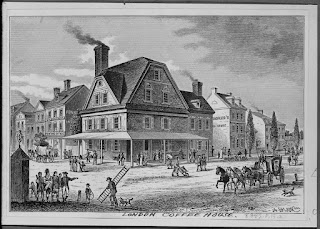 The London Coffee House was built in 1702, at Front and Market Streets, and remained intact until it was torn down in 1883.  Given that Preston was drawing its a quarter century later, how did he know what it looked like?  The answer lies in earlier contemporary lithographs that the artist clearly drew on to create his version.  The one shown here served as a model, right down to the four horse carriage at right.  The caption tells us:  “London Coffee House was…the center of pre-Revolutionary life in Philadelphia…where cargoes were bought and sold, slaves and good were auctioned, and the news of the day discussed.” 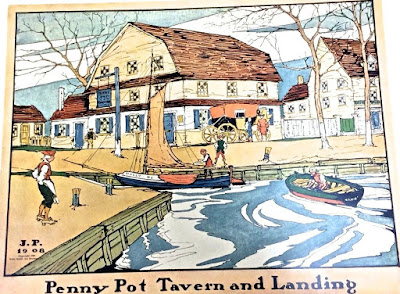 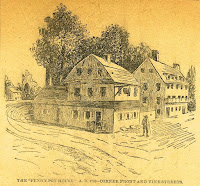 Amazingly, the Penny Pot House derived its name from the fact that a customer could buy a container holding about a pint of beer at the tavern for a single cent. Considered the second oldest tavern in the Philadelphia area, it was a landmark that stood near the docks on the Delaware River.  A Maryland guest was shocked by the seditionary talk he heard there: “The Delegates rage windily against the King’s Blessed Majesty, which shall stand as firm as the House that was founded on the Rock.”  Preston’s recreation of the Penny Pot may been taken in part from a 1700 lithograph shown here.  Note that he has put the landing point closer to the water than the earlier version. 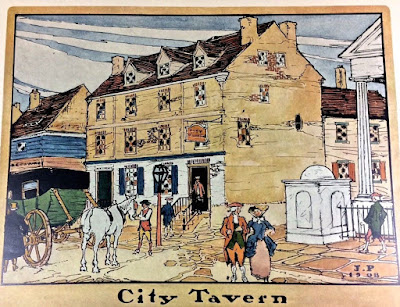 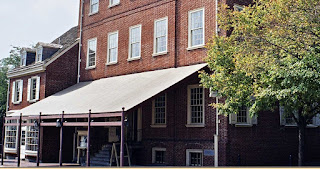 Completed about 1770, City Tavern was in Walnut Street above Second. The Continental Congress met there in 1774, two years before the Revolution. “It was early an important place, and after the Revolution succeeded the London Coffee House as the central place of Philadelphia.”  During succeeding years the establishment underwent several name changes until the building was demolished in 1852.  My assumption is that Preston relied on a old lithograph to guide him.  In recent years the City Tavern has been reconstructed at the original site. It is said to be historically accurate.  Shown here, however, the building looks quite different than the brewery drawing. 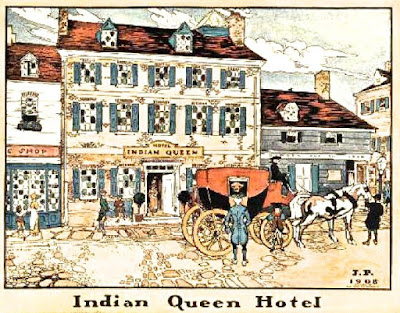 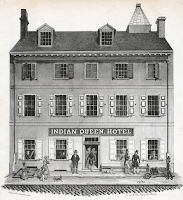 Indian Queen was a hotel noted for the importance of its residents.  It was the home of Robert Morris, the financier of the Revolution, and lodging for both George Washington and John Adams.  “Jefferson had his study in the south front room of the second story, from which arose the erroneous tradition that in this room he drafted the Declaration of Independence.”  Preston’s depiction echoes a contemporary print of the Indian Queen but features a different sign over the door. 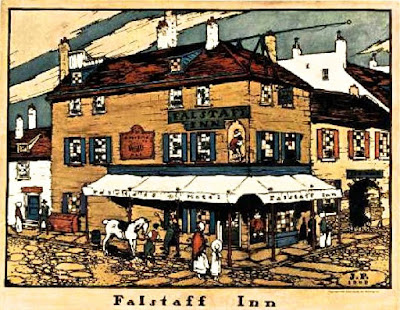 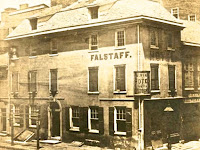 Opened as the Washington Tavern about 1790 at Sixth and Jayne Streets, the name was changed to the Falstaff Inn in 1830.  Owned by William Warren, an actor and former theater manager, he renamed it to commemorate his own stage portrayal of Falstaff.  Not only that, he had himself painted as Shakespeare’s fat rogue on the sign that can be seen at the second floor corner. The accompanying motto reads:  “Shall I not take mine ease at my inn?”  Over the years the hotel deteriorated into little more than a flop house, as shown here, and eventually was torn down.

This completes the first installment of our remembrance of Philadelphia inns and taverns as provided through the colorful and well-drawn lithographs by James  Moore Preston and commissioned by the Robert Smith brewery.  They help bring to life the early history of our country and the establishments where important business was done.