A Tempest of Whiskey Teapots 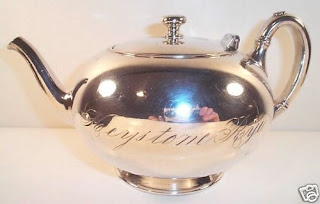 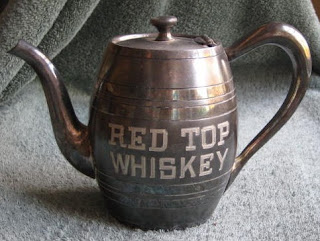 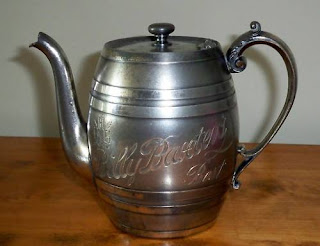 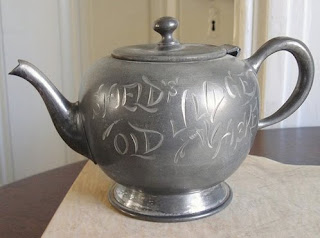 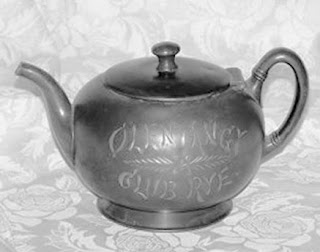 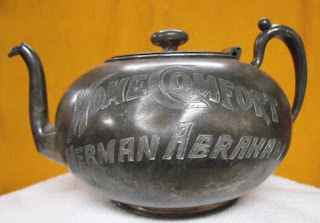 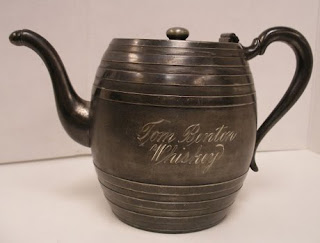 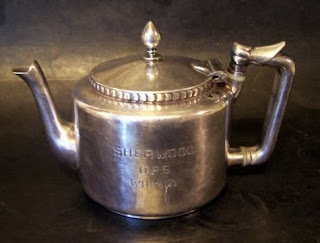 Pre-Prohibition whiskey distributors ranged widely in their attempts to merchandise their products through imaginative give-away items to saloonkeepers and the “faces along the bar.” Among the most unusual advertising items were metal teapots inscribed with the whiskey brand name and often the liquor company that produced it.

This blog is devoted to eight such teapots with some speculation on their creation and use.

The first four teapots shown here are from Cincinnati, where the idea may well have originated. In the late 1800s and early 1900s major whiskey distillers, rectifiers and distributors abounded in that Ohio city. For example, in 1881 the 10 leading Cincinnati distillers announced that their production for the prior year was 1.8 million gallons on which $103 million in taxes had been paid. Competition was fierce. As companies vied for market share, they found lots of inventive ways, including metal teapots, to keep their name before the drinking public.

Keystone Rye, the name inscribed on a silver-plated example, was the product of Klein Brothers, a Cincinnati distillery that Samuel Klein founded about 1875. Klein proved to be an excellent merchandiser and the source of such brands as Keystone Rye, Harvard Rye and Spring Lake Bourbon. His whiskey became nationally and even internationally known. He also was famous for his innovative give-away items, among which his teapot must be accounted as particularly unusual.

Sam Klein had formidable competition in a former grocer named Ferdinand Westheimer. In 1879 Westheimer founded a wholesale liquor store in St. Joseph, Missouri, gradually bringing three of his sons into the business. Very successful, particularly with his house brand, Red Top Rye, Westheimer eventually bought the Old Times Distillery in Louisville, Kentucky, and opened a outlet in Cincinnati. Westheimer’s teapot was made in Cincinnati by the Queen City Silver Company, operating from 1888 to the early 1900s.

Joining in this storm of teapots was Charles M. Pfeifer who founded a Cincinnati whiskey distributorship in 1882. His flagship brand was Billy Baxter’s Best, the name he had engraved on a silver plated teapot by the Cincinnati-based Homan Silver Plate Company. This item can be dated with some accuracy because Homan used this specific name only from 1896 to 1904.

Rounding out the Cincinnati quartet was Shields, May & Company, whiskey distributors and rectifiers who featured some dozen different brands of whiskey. Because a San Francisco firm had registered the name “Old Judge” with the Federal government in 1902, it appears that the company was seeking to avoid a lawsuit by labeling this product as Shield’s Old Judge Whiskey. According to its base mark, the teapot was made by the Columbian Silver Company.

Further south in Ohio, another competitor with a regional market for its whiskey also was offering customers a teapot. Founded in 1879 by George Lang and brothers William and Charles Schenck, their whiskey rectifying and distributorship flourished. Occupying a three-story building immediately adjacent to the Columbus, Ohio, courthouse, Lang, Schenck Co. featured Olentangy Rye as its flagship brand.

Herman Abraham, a whiskey dealer whose city of origin I have not been able to identify, used a teapot to advertise two brands he offered. The first, Home Comfort, was from the Joseph Herrscher Company of San Francisco (1907-1916). The opposite side advertised Guckenheimer Rye, from a Pittsburgh distiller that began business in 1857.

A teapot advertising Tom Benton Whiskey hails from a Wisconsin, dealer. His name -- A. (for Albert) F. Watke -- appears on the other side of the metal vessel. Watke appears to have begun business in Milwaukee in 1897 and moved north to Fond du Lac after 1902.

Finally, a silver plated teapot exists marked Sherwood OPS (Old Pot Still) Whiskey. It was the product of Sherwood Distilling of Cockeysville, Maryland, with offices in Baltimore. The distillery was founded in 1883 and within a decade Sherwood Rye became a nationally known brand. This teapot was the product of the Meriden Silver Plate Company (1869-1898) of Meriden, Connecticut.

With one exception, all these firms and brands disappeared early in the 20th Century, most because of the onset of state or National Prohibition. As a result each of these metal teapots can be dated before 1920. The only brand name to survive the 14 year drought was Sherwood, but the whiskey was produced at a different site by new ownership.

What were these metal teapots used for? My guess is this: Because it was not unusual in those days to mix hot water with rye and bourbon whiskey, these items might have been used by bartenders to hold boiled water until called for by a customer to lace his toddy. But this is just a guess. The saloons might even have been serving tea. Naaah.
Posted by Jack Sullivan at 2:08 PM 4 comments: 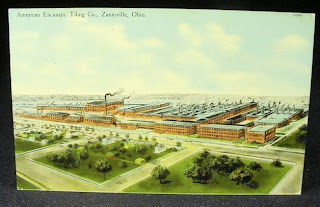 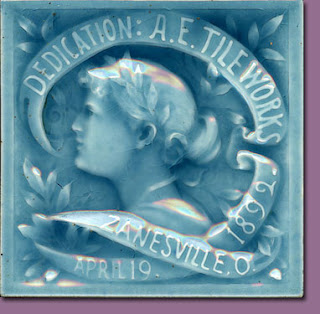 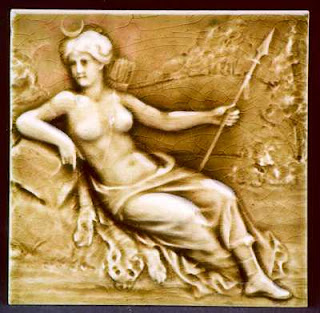 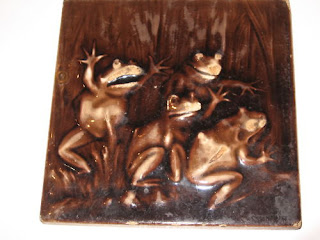 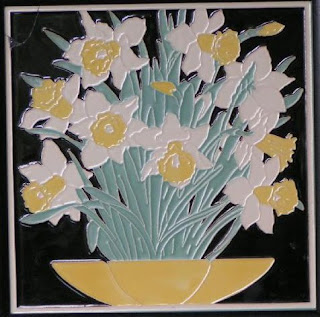 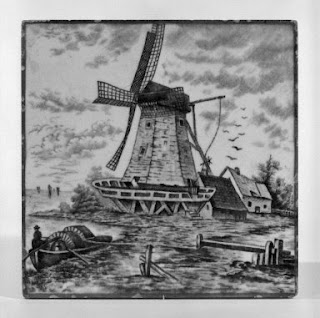 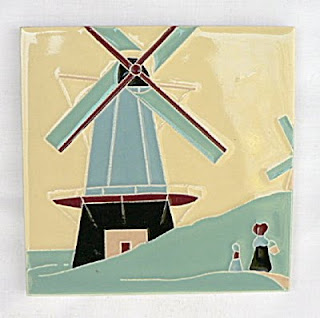 For many years I have been fascinated by decorated tiles as a ceramic art form. My temptation to collect them has been tempered by the high prices achieved by the most attractive and desirable art tiles. A notable exception are the products of the American Encaustic Tiling (A.E.T.) Company of Zanesville, Ohio. They are unusually attractive but remain for the most part modestly priced and, for me, tempting.

Because of its proximity to supplies of high quality clay, Zanesville for three centuries has been a hub for ceramic production. The A.E.T. factory was founded in 1875 by E.H. Hall, who named it and shortly after disappeared from the scene. Subsequently the pottery was purchased by New York investors who hired competent management and talented artisans. Originally committed to floor and other utilitarian tiles, about 1880 A.E.T. began making art tiles through its encaustic process. It involved complicated procedures in which powdered clays of different colors were pressed together to form a pattern or design.

Herman Mueller, a noted innovator in art tile techniques, was hired in 1887. He had the ability to produce large relief tiles, panels of female figures, and portraits. Next to climb on board A.E.T. was Karl Langenbeck who some believe was the greatest ceramic chemist America has ever produced. Sales soared. Outgrowing its facilities, A.E.T. in 1892 built a brand new plant, shown here, and bragged that it was the largest tile factory in the world. More than 20,000 people attended the opening, led by then Ohio Governor William McKinley, later to be a U.S. President. The company issued a special ceramic for the occasion.

Through the years this factory produced art tiles by the tens of thousands. Early on the themes tended to be classical ones, like the mural shown here, attributed to Herman Mueller. Another traditional example was the Diana Huntress figure. A.E.T. designers also showed a sense of humor in tile depicting frogs and other animals. As the art deco age dawned, A.E.T. adjusted to more modern styles. Despite being made for the masses, A.E.T. products are held by leading art institutions. The Brooklyn Museum, for example, has a major A.E.T. collection and displays it online.

A.E.T. had a remarkable 60 year life span during which it continued to produce both household and artistic tiles. The pottery’s ability to change with the times is evident in two windmill tiles shown here, one traditional from the 1880s, another modern from the early 1930s. With sales falling rapidly during the Great Depression, however, the Zanesville plant was forced to close in 1935. Today the A.E.T legacy can be counted in the many highly desirable artifacts still within the price range of most collectors.
Posted by Jack Sullivan at 12:38 PM No comments: 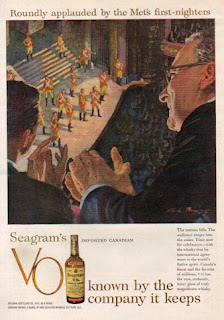 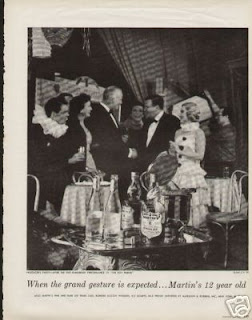 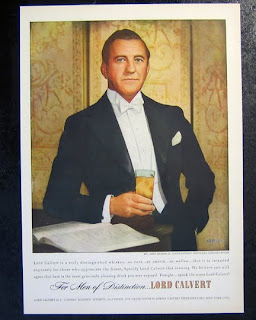 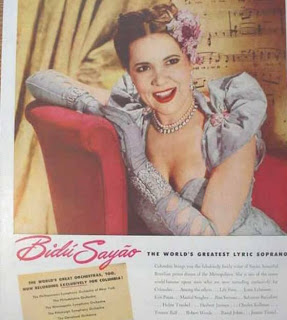 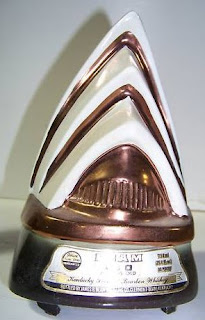 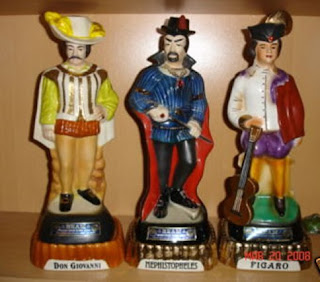 While much of the lore of whiskey in the U.S. involves log cabins and pioneers hacking down trees and plowing the land while cooking up a brew of bourbon in the back yard, the truth is more complicated. As early as the immediate post-Civil War era the money men of Wall Street had a deep interest in investing in distilling. For example, Edson Bradley, a Connecticut blue blood, was the driving force behind the success of Old Crow, a product of Frankfort, Kentucky. He became one of the wealthiest men in the country.

These financial “Fat Cats” often were patrons of the arts, including the opera. They were anxious to take whiskey out of the back woods and into high society. What better way than to identify their money interests with their cultural proclivities. As a result, a whiskey ads and artifacts from 1950 to 1980 not infrequently reflected opera themes.

Take for example the Seagram’s VO ad shown here. The headline reads: ”Roundly applauded by the Met’s first nighters.” In other words, the”creme de la creme” who could afford those steep ticket prices. The opera they appear to be watching is may actually be a operetta about the Canadian mounties called “Rosemarie.” The setting belies the reputation of Seagram’s famous owner, Samuel Bronfman, as crude whiskey robber baron.

A 1959 ad from Fortune magazine for Martin’s whiskey depicts the after-the-curtain-falls party in which the tuxedos and gowns mix happily with the cast members still dressed for the stage. Here the opera appears to be Pagliacci with the principals in their clown costumes. The tag line suggests: “When the grand gesture is expected...Martin’s 12-year-old.”

Schenley Canadian Whiskey, a best seller in the U.S. since Prohibition, featured Opera Star Ezio Pinza in a 1950 advertisement. Pinza had become well known to the American public by appearing in the smash Broadway musical “South Pacific.” Apparently a bit nervous about seeming too high brow, the Schenley ad pictures Pinza in a cowboy hat -- obviously trying to straddle the line between high culture and the high plains.

The “Men of Distinction” series by Lord Calvert, another Seagram’s product emphasized that their whiskey was “intended expressly for those who appreciate the finest.” Among the cognoscenti apparently was John Donald Mackenzie Brownlee (1900-1969), an Australian who was principal baritone at New York’s Metropolitan Opera from 1937 to 1958. He was famous for his performance as the Count in the “Marriage of Figaro,” playing opposite Ezio Pinza in the title role.

Although one has to look hard to find the mention amid plugs for Columbia Records, an ad for Imperial Whiskey, another Canadian product, featured Bidu Sayao (1902-1999). She was a Brazilian born lyric soprano who sang at the Met -- sometimes opposite Pinza and Brownlee -- from 1937 until her retirement from the stage in 1952.

Jim Beam, a true Kentucky product, may have gone the furthest in its effort to connect whiskey with opera. Over a period of several years in the late 1970s and early 1980s it issued a series of decanters containing Beam whiskey for the benefit of several opera companies. Among them was the Australian Opera. It received some proceeds from the sale of a replica of the Sydney Opera House.

The Chicago Opera was the beneficiary of a series of decanters in the shape of leading opera figures including Don Giovanni, Mephistopheles (from “Faust”) and Figaro from “Marriage of Figaro.” Each of these included a gold stand in held a music box that played a song from the opera. The whiskey-filled decanters also came with a “mini-me” -- a smaller solid ceramic figurine that mimicked the decanter. Shown here is the small Mephistopheles. It could be used as a paperweight. Although many Beam bottles are virtually worthless (see my blogs for September and November 2009) these items sell for upwards of $175.

There you have it: The odd couple --whiskey and opera -- a marriage born of the moneyed classes desire to link booze with culture.
Posted by Jack Sullivan at 6:37 AM No comments: