I continued to be astonished, amused, attracted — you find a word — for the use of children in beer ads in the pre-Prohibition era, that is, before 1920. This is my third post on the subject.  I find that some brewers regularly used kids to sell their suds.  Two of them are profiled here.  Others seem to have featured them as a “one off,” among a variety of images. 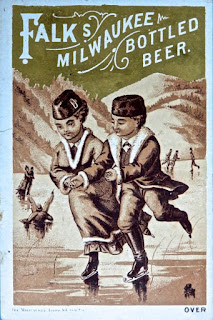 Franz Falk’s Bavaria Brewery of Milwaukee (1856-1892) may have set a record for the use of children in its ads.  In addition of two trade cards I have already shown,  I have collected five more images, like the one shown right.  Initially Falk seems to have been reluctant to show the youngsters in close association with his beer.  This card shows two children ice skating, with the male on the right holding the hand of the girl.  Although skating is a common winter occupation in Milwaukee, the presence of mountains in the background make it clear we are not in Wisconsin 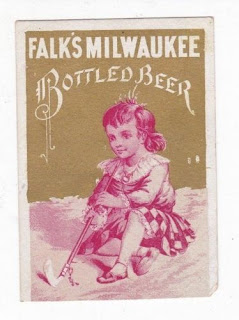 We might be in Bavaria because that is where Falk got his start, learning how to make beer in a local brewery.  He struck out for the U.S. in 1848 settling first in Cincinnati and three months later went to Milwaukee with its strong German population.  By that time all of Milwaukee’s famous breweries — Pabst, Schlitz, Miller, and Blatz -  had been established.  Falk found work at smaller breweries, saving his money until in 1855 with a partner, he built a malting and brewing enterprise in the city’s Menomonee Valley. 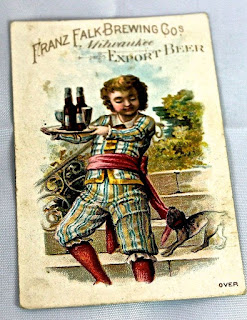 Shown above, a second kiddie card from Falk depicts a young girl contemplating a golf club.  There is no indication what this illustration may have to do with beer.  Later trade cards are more explicit in that connection, for example showing a youthful waiter attempting to bring bottles and glasses full of Franz Falk Brewing Co.’s Milwaukee Export Beer while a dog imperils the exercise by biting onto the lad’s belt. 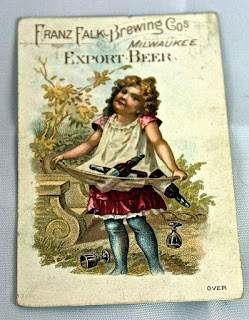 Although a similar disaster is implied by a trade card of a small girl who seemingly has been carrying three bottles of beer and two glass goblets on her apron.  She is finding out that the arrangement does not work well as the items begin to spill on the ground.  The little curly hair does not seem to mind, however, as she provides a wan smile.  The only youngster who seems to be having no trouble getting beer from here to there is a well-dressed black girl.  She has put her beers in a sturdy basket. 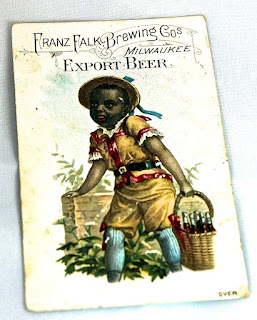 In a city full of breweries, Falk’s advertising apparently was successful.  By 1872, Franz’s was the fourth largest in Milwaukee.  In 1880 the Bavaria brewery consisted of five brick and stone buildings, including the yards, outbuildings, and side track to the Milwaukee & St. Paul Railway. The site occupied about 5 acres, operating with eight icehouses and on-site malting production of approximately 100,000 bushels annually. Falk employed 100 men, twelve teams of horses and operated its own cooperage. In addition Falk owned their own rail cars for shipping beer.  After a major fire in 1892, however, the Falk family sold out to Pabst. 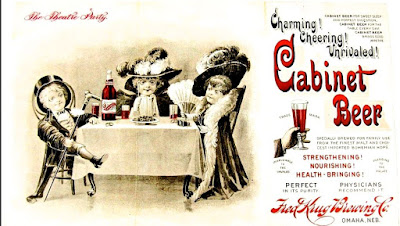 The Krug Brewery is another that featured children on it's advertising trade cards.  As shown above, Krug went a step further than Falk by showing its kids sitting at a table with bottle and glasses of beer of varying amount of liquid.  They are announced as having a “theatre party,” dressed in costume.  The text makes clear that Krug’s “Cabinet Beer” is “specially brewed for family use” — apparently no matter how young. 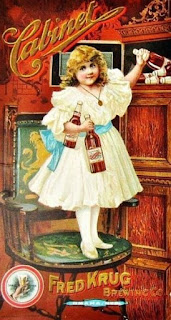 In 1859 Fred Krug established the Krug Brewery with an original output of one and a half barrels a day.  Located in Downtown Omaha, by 1880 the company was brewing approximately 25,000 barrels a year. In 1894 the brewery moved to new facilities adjacent to South Omaha.  The plant cost $750,000 and was reportedly one of the best equipped breweries in the country.  Fred was doing well by making children his salespersons and emphasizing family use. 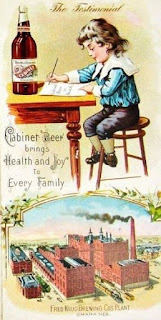 I am particularly struck by one trade cards that show a young lad perched on a stool with a large bottle of Krug’s Cabinet beer on the table in front of him.  He is said to be writing a testimonial to the brew, which would indicate considerable personal interaction with the bottles.  It likely read, as does the card, “Cabinet Beer bring Health and Joy to Every Family.” 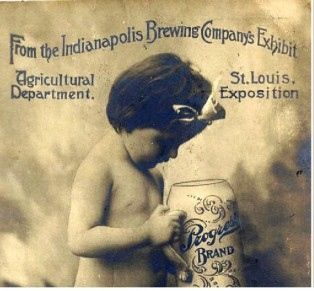 My  favorite kiddie ad for beer is the toddler depicted on a trade card by the Indianapolis Brewing Company, the city’s biggest and longest-lived brewery.  Formed in 18897 from a consolidation of three already established brewing companies in the Indiana city.  It survived through National Prohibition and continued operations until 1948. 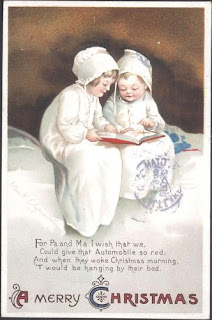 The last example here is a trade card from the Imperial Brewing Company, the creation of a group of Kansas City investors who saw a growing market for lager beer in a burgeoning population. Financed at $50,000, the facility was to have a brewing capacity of 50,000 barrels.  Plagued by problems of profitability, it went bankrupt in in 1905, had new ownership that changed the name and downgraded Imperial from its flagship brand.  The trade card makes use of the art work of Ellen Clapsaddle, whose depictions of wee ones were highly popular at the turn of the 20th Century.  The card here would have been sent by the brewery at Christmas.

None of these images of children selling beer survived after the fourteen years of National Prohibition.  By then sensibilities about advertising of alcoholic beverages had changed markedly and it was no longer appropriate to identify kids with booze.  Thus these images are now just short of one hundred years old and approaching “antique status.”

Posted by Jack Sullivan at 6:38 AM No comments:

Reviewing My Life Through Cartoons

During the last 45 years from time to time people have given me magazine and newspaper cartoons that they believe have some particular relevance to my life.  Sometimes the motivation is that the drawings cite my given or surname;  sometimes because they are relevant to a particular chapter or event in my life.  I have kept those cartoons and, exclusively in this post, now present them in what seems like a reasonable order. 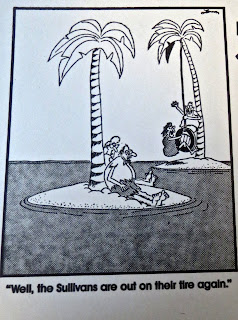 The first cartoon is from Gary Larsen depicting two couples separated by tiny islands, one frolicking on an automobile tire hanging from a palm tree.  The wife of the other couple, apparently critical, remarks:  “Well, the Sullivans are out on their tire again.”  This scene recalls those giddy years 1963-1965 when as newlyweds my wife, Paula, and I lived in Georgetown, D.C., and did at least our share of partying. 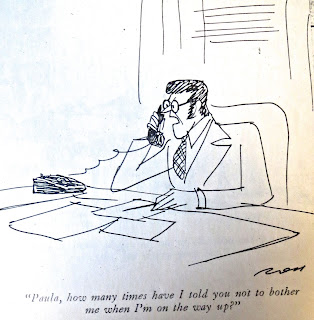 But ambition also had to have its day and a New Yorker cartoon seeming caught me at my desk as a young Congressional staffer — appropriately the sideburns, glasses and tie — admonishing my wife:  “Paula, how many times have I told you not to bother me when I’m on the way up.”  (She likely was calling to say one of the children had croup.) 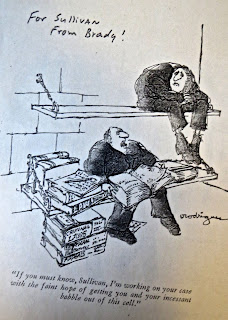 Charles Rodrigues (1926-2004) did not know me when he penned the cartoon above for Playboy, using my surname.  But the situation in my House Foreign Affairs Committee office with my colleague, Jack Brady, was highly pertinent.  The other prisoner wants to spring Sullivan “in the faint hope of getting your incessant babble out of this cell.”  Brady frequently told me:  “With you the second bullshitter never has a chance!” 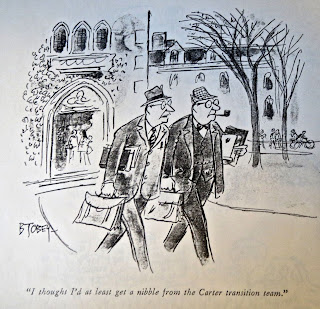 No question but when Jimmy Carter won the Presidency in 1976 that I wanted out of the Committee “cell” and a place in the Administration.  Another colleague spotted this cartoon by Barney Tobey (1906-1988) in the New Yorker that shows two college professors seeking a “nibble from the Carter transition team.”  I was fortunate enough to get that nibble and ended up as head of the Asia and Pacific Bureau of the U.S. Agency for International Development. 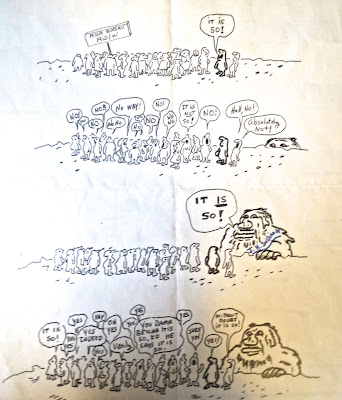 During my four years as head of the Asia Bureau, I trust my service was not as authoritarian as the cartoon right.  The drawing was altered to fit the occasion and sent to me by one of my staff, a noted jokester.  In 1980, Reagan having won the presidency from Jimmy Carter, I was thrust after 20 years back into the private sector, working for an international consulting firm.  One of my friends thought that the Bill Long cartoon was appropriate to my new situation. 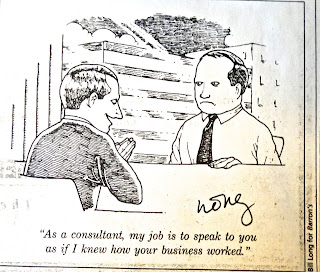 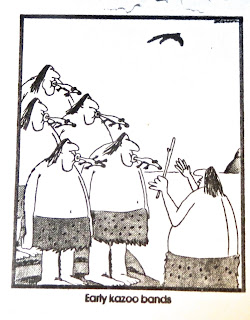 During the period of adjustment, I was engaged in a variety of activities, including organizing kazoo bands, both among extended family members and my co-workers at the consulting firm.  As a result, a Gary Larsen cartoon of cavemen playing a tune on what appear to be lizards appealed to at least one family member as appropriate for me.

In his inaugural address in 1989, George H. W. Bush mentioned “a thousands points of light…all the community organizations that are spread like stars throughout the Nation, doing good.”  The comment gave rise to a multitude of cartoons at the time, including one by Robert Maxwell Weber, known for over 1,400 cartoons that appeared in The New Yorker from 1962 to 2007.  Given my obsession with televised sports, this one had a certain appropriateness. 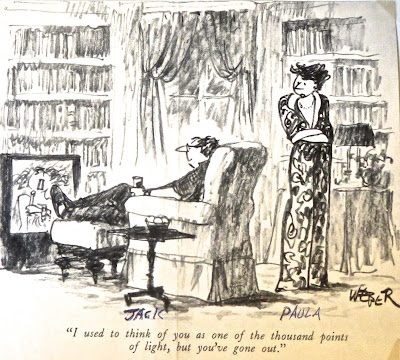 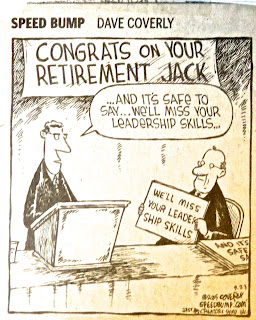 The final cartoon by Dave Coverly (born 1964) below, also has some relevance.  Although ordered to retire at age 75 by my consulting firm boss after twenty-some years on the job, a man who might be compared with one at the podium, I quit and got another job right away.  But if there had been a retirement ceremony for “Jack,” I might well have written my own “goodbye.”

They say that art imitates life.  It would seem that idea can be expanded to cartoons that, now and again, have imitated my life.  Or was my life imitating those cartoons?

Posted by Jack Sullivan at 5:48 AM No comments: