A Nevada Desert Shrine to the Lowly Beer Bottle

Consider the beer bottle, when drained of its contents is known popularly as a “dead soldier.” It is an item when stripped of its label is as featureless as a fencepost, an artifact disdained by collectors whose hearts otherwise beat faster at the sight of an elaborately embossed glass container.  Yet in a Nevada desert adjacent to Death Valley stands a shrine to that lowly bottle — a structure composed of more than 50,000 beer bottles, as shown below on a postcard view. 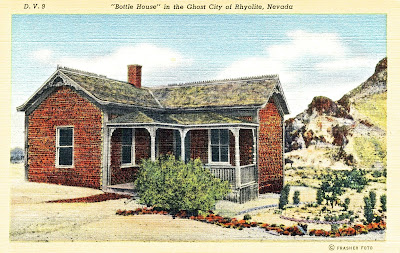 It was built by a saloonkeeper named Tom Kelly in Rhyolite, Nevada, a gold rush boom town of the early 1900s.  Kelly’s choice of building materials was driven by a lack of good local timber.  He chose  bottles, he said because “it's very difficult to build a house with lumber from a Joshua tree." Beer bottles were particularly common in Rhyolite, a town that boasted dozens of saloons.  Kelly collected and used an estimated 51,000 bottles to construct his house of glass.  The saloonkeeper laid the bottles on their sides, with the bottoms facing out, and mortared them together with adobe mud. 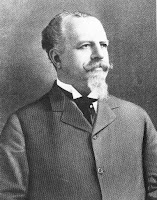 For his building materials, Kelly could thank Adolphus Busch, the founder and moving force behind the Anheuser Busch brewery in St. Louis, Missouri.  Perhaps wiser than other brewers of his time, Adolphus, shown here, understood that in the small and often isolated mining camps and towns of the Old West dwelled the wealth and future population growth of the United States.  He literally flooded the mountains, deserts and plains with his golden liquid.  Busch ads emphasized bringing the bottled brews by mule train over the hills and through the valleys, led by cowboys in ten gallon hats and riding while horses.  Actually by the 1900s railroads reached many Western locations, including Rhyolite. 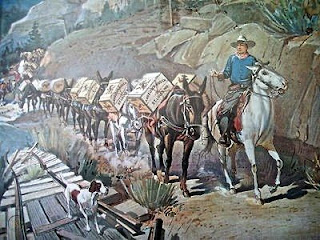 Busch was passionate about beer bottles. In order to keep up with his brewery production he had an ever increasing need for glass containers.  Once he was even forced to import them from Germany.  To be assured of a supply Adophus formed a series of companies to manufacture bottles.  In 1886 he bought a glass works in Belleville, Illinois, changing its name to his own.

Subsequently he incorporated the Adolphus Busch Glass Manufacturing Co. in St. Louis, buying the Belgian Pavilion at the New Orleans Louisiana Purchase Exposition and fitting it out as his glass factory, shown here  As a result, the principal base marks found on the bottles Kelly used in his walls were the “AB” of Anheuser Busch. 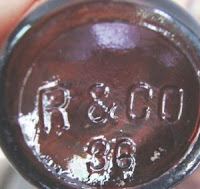 Almost as numerous in the house are beers with a “R&CO” mark and a number.  Those were from the Reed & Company’s Massillon, Ohio, Glass Works, founded in 1881.  This company specialized in supplying beer bottles to western breweries and Adolphus was a major customer.  All the bottles used would now be well more than 100 years old.

Estimates differ widely on how long it took Kelly to build the three room, L-shaped dwelling.  Some accounts say five months, others more than a year.  He is believed to have spent about $2,500 on the building with most the money going for wood trim and fixtures.  Whatever Kelly’s original intention, by the time the building was finished he had a new idea.  Whether it was his advancing age, the foresight to see the future of Rhyolite, or another reason, upon completion Tom decided to capitalize on the widespread attention the house had attracted and raffle it off.

The lottery was won by locals named Bennett, three of the family shown here. They lived in the bottle house from 1906 until 1914.  Shortly after Rhyolite regressed to a ghost town.  Through it all, however, Kelly’s shrine to bottles survived.  In 1925 Paramount Pictures chose the scene for the filming of two movies called “Airmail” and “Wanders of the Wasteland.”  The studio repaired the roof of the bottle house and after filming was completed donated the property to a  Nevada historical preservation group.  That organization operated the site as a museum until 1953 when the house was sold to a couple who ran it for a few years as an antique store. 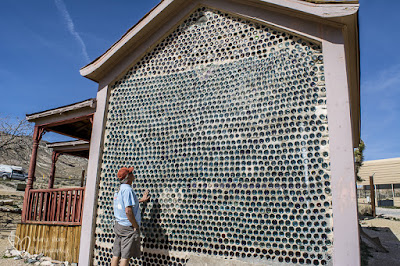 In recent years the building has remained standing, although empty, and a tourist attraction for those willing to drive off Nevada State Route 374 to what remains of Rhyolite for a look at the world’s largest collection of old beer bottles.  Kelly’s building in the desert has become a shrine to that most neglected of “dead soldiers.”