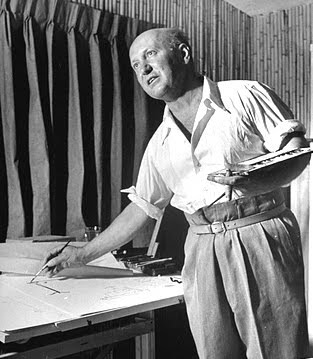 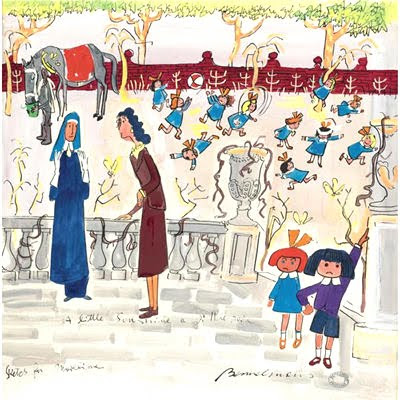 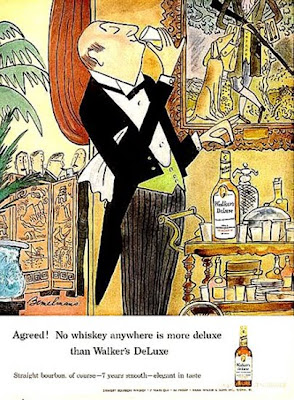 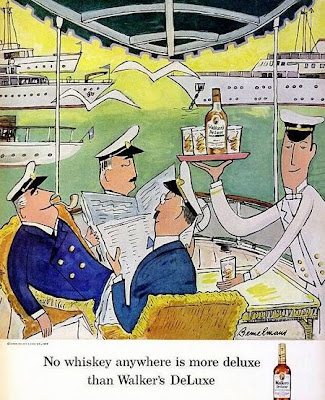 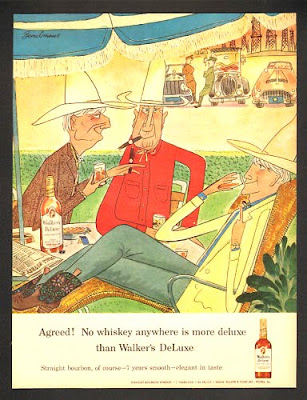 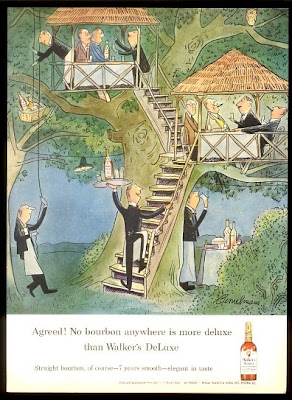 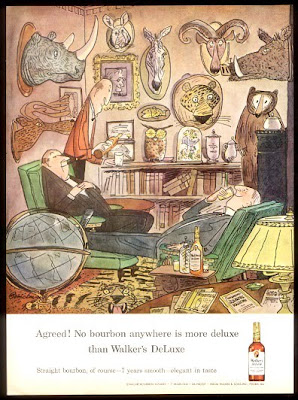 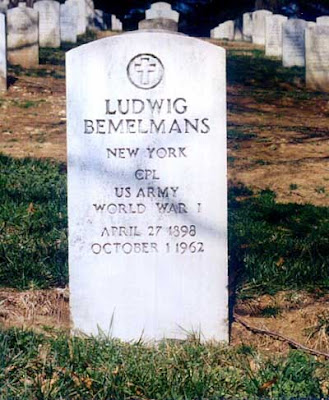 My earlier post, Dr. Seuss Sells the Sauce” (July 2010), chronicled the beer and whiskey ads created by the famous children’s author. Although Ludwig Bemelmans may not be as well known, his children’s books have been avidly read for decades. Like Seuss, Bemelmans, shown here, used his distinctive artistic style to draw a series of ads for a whiskey maker. His pictures remain a marvelous, whimsical legacy.

Bemelmans, who was an author as well as an illustrator, was born in the Austrian Tyrol in 1898. Employed at 16 in his uncle’s restaurant, he shot a headwaiter in a dispute and the family gave him the option of reform school or emigrating to America. He chose the latter and as he said...” I bought two pistols and much ammunition. With these I intended to protect myself against and fight the Indians.”

After landing in New York City, he soon joined the U.S. Army during World War I, despite just barely being able to speak English. His antics as a soldier, including firing his pistol at unruly prisoners he was guarding, were captured later in his humorous memoir, “At War with the Army.” After the war Bemelmans writings and art began to gain important recognition. It was not until 1934, however, that he published his first children’s book and followed in 1939 with the adventures of a Parisian school girl named Madeline (named after his wife). As shown here, his delightful drawings were an instant success and the Madeline stories became a series, ending only with his death.

As his fame as a children’s author grew, he continued to contribute drawings and writing to national magazines such as Vogue, Town and Country, The New Yorker, Fortune, Harper’s Bazaar, McCall’s, Holiday and Stage. It was perhaps natural then that the Hiram Walker Company of Detroit and Walkerville, Ontario, one of America’s largest distilleries, would tap Bemelmans’ talents for advertising its flagship brand, Walker Deluxe Bourbon. This whiskey for years had featured a black waiter serving whites -- a theme that probably was losing its market appeal as the Civil Rights era dawned.

As a result, from 1957 to to 1959 Bemelmans drew a series of color ads for Walker Deluxe. By my count there were 11 in all, of which 5 are shown here. The consistent theme is the enjoyment of the whiskey by people who clearly are very, very rich, but each illustration has a waggish twist.

The first ad shown here is of a butler taking a nip from the Walker Deluxe bottle. This caused one contemporary observer to ask: Oh, Ludwig Bemelmans, it’s a mere hop, skip, and a jump from little Madeline causing mayhem in the orphanage to butlers helping themselves to a swig from the drinks cart, isn’t it? Please note the dog in the picture at left: His arch attitude mimics the butler.

The next two ads are similar in theme. In the first, a group of three yachtsmen are served whiskey by a cabin waiter. They are clearly on a yacht while in the background their own yachts are anchored nearby. The second features three Texas oil tycoons, hats and shirts of the type, enjoying a drink while in the background their limos and sports cars, with uniformed drivers, await. Snob appeal with a twist.

The next ad features at least four waiters serving a number of gents (no women appear in any of the 11 Bemelmans ads) in an African safari tree house. The waiter at far left, as in the first picture, is helping himself to a nip of whiskey before serving it. Note that no waiter in any of the ads is a person of color. Hiram Walker executives apparently had seen the error in that depiction.

My favorite is the last image. It shows a waiter serving two portly gentlemen sitting beneath the trophies of prior hunting expeditions. Each animal is worth examining for its slightly different expression, ranging from anger to puzzlement. Bemelmans has injected into this scene, just under the rabbit, top left, the framed picture of an elderly woman, probably the mother of one of the drinkers. They apparently see no irony in her appearance among the trophy heads.

During the 1950s Bemelmans became involved in show business, designing the set for a Broadway production and doing several stints in Hollywood. The murals he painted at New York's Carlyle Hotel bar are still prized for their delightful whimsy. He died in that city in October, 1962 at the age of 64.

Ludwig Bemelmans is buried in Arlington National Cemetery outside Washington, D.C. There his gravestone records none of his many accomplishments as an artist and writer. It states simply, Cpl.U.S.Army, World War I. Of that service to his adopted country, Corporal Bemelmans clearly was justly proud.


Posted by Jack Sullivan at 7:44 AM No comments:

Collecting: A Focus on Fantasy 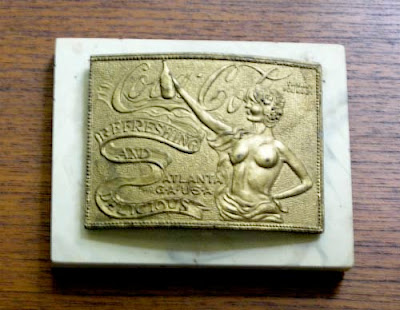 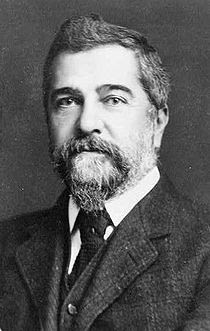 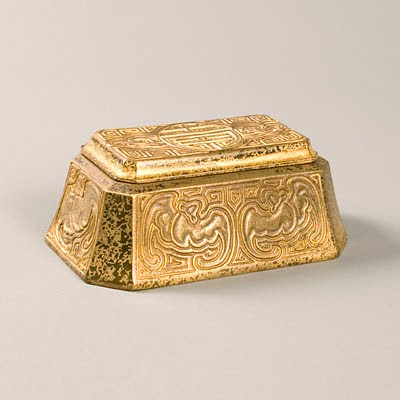 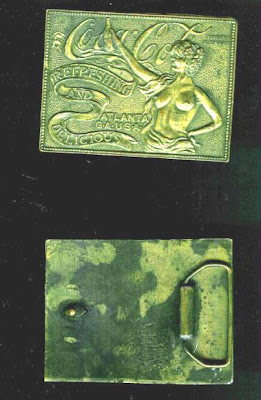 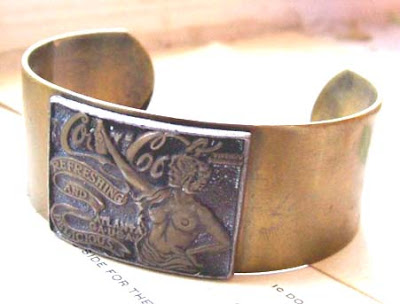 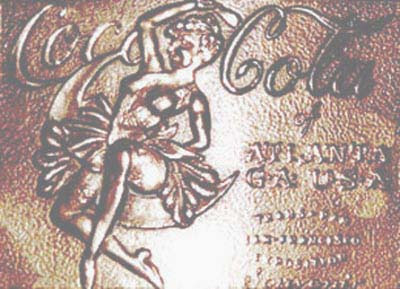 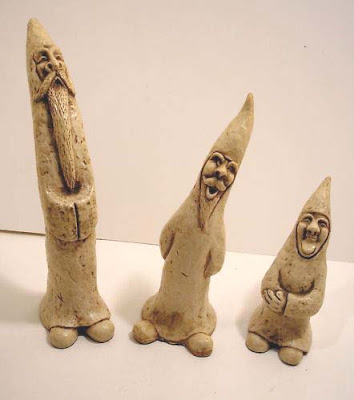 Recently on eBay I saw, bid for and won a heavy brass paperweight on a marble slab, shown here. In bas relief It features a bare-breasted young woman holding a bottle high against the familiar Coca Cola logo. Other features are a ribbon on which appear the words “Refreshing and Delicious” and “Atlanta Ga USA.” In small letters in the upper right appear the words “Tiffany Foundry.”

Tiffany Foundry was a enterprise of Louis Comfort Tiffany (1848-1933) an American artist and designer, shown here, who worked in the decorative arts and is perhaps best known for his work in stained glass. As a foremost adherent of “Art Deco” -- the design of the paperweight -- he also executed numerous metal work items in his foundry, such as the inkwell shown here. Most Tiffany items fetch high prices.

My paperweight is an interesting and attractive piece. It surprised me then to win it with a bid of $15, the price of a modest lunch. Subsequent research revealed, however, that presumably knowledgeable collectors of Coca Cola items, of whom there are many, consider this object a “fantasy.”

The concept was new to me. After some thirty years of looking at, accruing and writing about collectibles, I have become accustomed to looking out for reproductions knowingly or unknowingly sold as the real thing. There are dozens of “repros” that collectors of expensive glass bottles are aware of. Antique watch fobs with value are reproduced (counterfeited?) so frequently that it plagues the hobby.

But “fantasy” items are not reproductions or imitations. They are described by commentators as items that were not designed or in any way issued by the company advertised. In this case Coca Cola. The question remains whether they were meant to fool collectors. Describing them as fantasies seems to me to avoid the question.

The image on my paperweight shows up in other formats, including a belt buckle and a bracelet, shown here. The back of the belt buckle identifies “Tiffany Studio” and “JJ Willard-Phila” as identifying marks. One Coke specialist says: “Unfortunately these buckles are really worthless...Most experts seem to agree that the value of each buckle range from nothing to no more than $10.” ($5 less than I paid for the weight.)

Presumably these fantasies proliferated at one point in history. Shown here is different Coca Cola belt buckle that also is disparaged by the cognoscenti as a fantasy.

The Tiffany folks for a long time were unsure if their foundry had made the items bearing their name because the records had burned during the 1930s and were unavailable. Eventually they decided that the company had not been involved and identified the items as a fraudulent. In the interim, according to reports, some collectors had been gulled to purchase them to the tune of hundreds of dollars.

My paperweight has a felt base and a sticker label, indicating rather recent manufacture, and a reference to the “The Art Mint, Ltd” of St. Louis, Missouri.” Information on this firm is sketchy. It seems not to exist anymore but produced other novelty objects including resin wizard figures, shown here. They surely qualify as fantasy.

For me the personal question remains: Was I defrauded by paying a modest amount for this object, no matter who made it and when, one that has a elegant Art Deco design and format? I don’t think so. It will keep its place in my collection. Given its strong appeal , it would seem ridiculous, regardless of value, to think of this paperweight as something as flighty as a fantasy.
Posted by Jack Sullivan at 2:08 PM No comments: