Putting a Woman on the Moon — with Beer 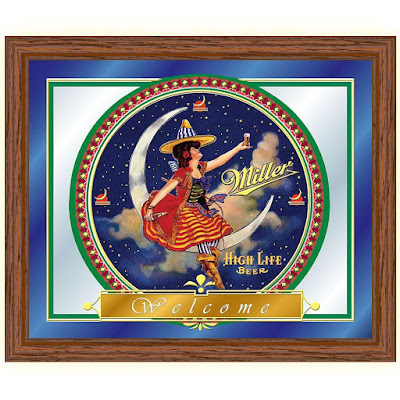 Long before the U.S. space program had put men on the moon, the geniuses responsible for beer advertising had put a woman there.  The most iconic of these is the “High Life Girl” shown here on a bar mirror exactly as she looked 110 years ago when the Miller Brewing Company made her their symbol.  The mirror currently can be bought at Home Depot. 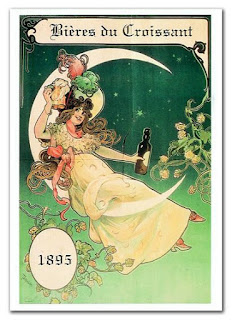 The Miller girl, however, was not the first young maid to grace a beer promotion.  That honor may go to a French poster dated 1895 that was entitled “Bieres du Croissant”  showing a damsel with a large bread product in one hand and a bottle of beer in the other.   It is done in the “art nouveau” fashion so popular at the time.  Her large hat may have had an influence on subsequent images.

A Canadian brewery was also ahead of Miller in depicting a moon maiden.  That image, shown here, seemingly dates

from about 1900.  Eugene O’Keefe, a wealthy banker, purchased an existing Ontario brewery and renamed O’Keefe & Company.  It was the first to produce lager beer in Canada, along with ales and porters.  O’Keefe was one of the first brewers to use trucks for beer delivery, first to build a mechanically refrigerated warehouse and one of the first to advertise extensively. 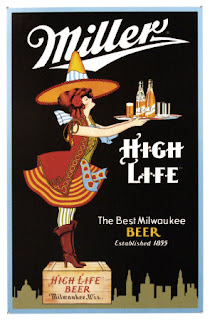 Nor did Miller Brewing immediately set the girl swinging in the heavens.
Miller High Life Beer first hit the market on December 30, 1903.  Soon after its release, it was advertised with a drawing of a woman in what looked like a circus costume, complete with whip, standing on a crate of Miller High Life and offering up the “Champagne of Bottle Beers.”  Over the years various members of the Miller family have claimed an ancestor as the model for the girl but none has proved definitive.

Why Miller decided to send her aloft has been lost in the mists of time.  One account has the company advertising manager, A. C. Paul, hiking alone in the Wisconsin North Woods — possibly lost — suddenly struck with a vision of the High Life Girl on a moon.  When he returned to Miller’s Milwaukee headquarters he ordered the sky-high images.  And the rest is history. 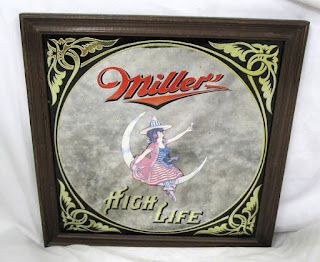 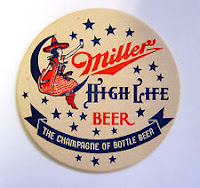 The image was promoted vigorously and seemingly caught on quickly with the drinking public.   The brewery provided its customers with wall signs, bar mirrors, and serving trays featuring the girl in the moon.  Retail customers were gifted with metal “pin backs” at beer gardens and festivals. 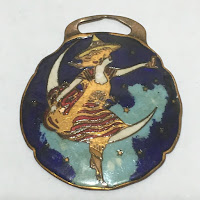 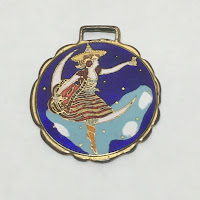 I have been particularly taken with the enameled watch fobs bearing the Miller High Life Girl.  Those items were given away to special customers and meant to be displayed on the outside of a vest or coat, attached to a watch stowed in a chest-level pocket.  The two shown here clearly were produced by different artisans, each with their own ideas of appropriate colors.  On the one at right the girl’s hair appears to have obscured her eyes. 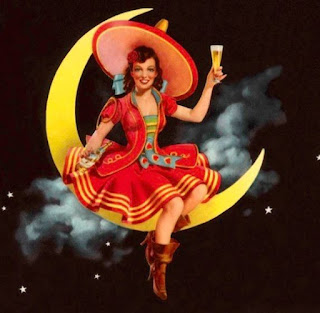 With the coming of National Prohibition in 1920 the Miller girl got a rest.  With Repeal in 1934, the brewery resumed normal business and she returned, this time with a somewhat different look.  While earlier she had been in profile, seemingly looking off toward some distant star now she was facing the public directly, no longer a girl but a mature woman, a “glamor girl” perhaps.  This more realistic image was equally promoted with manifestations in many forms, including the crown tops on Miller beer. 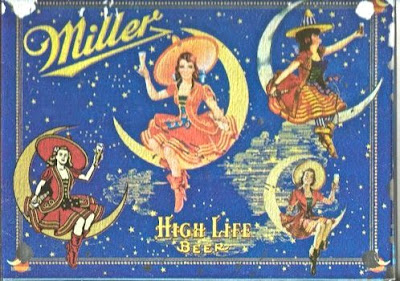 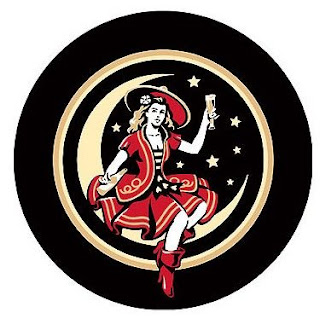 With the further passage of time, as shown on a Miller bar sign, the figure of the High Life Girl evolved two more times, with the last manifestation the one at far left, an illustration meant to convey a symbol rather than a realistic pose.  Its more contemporary look has found favor.  The image shown here is a bar stool seat that can be purchased on-line.  Thus, this icon in its several forms continues to fascinate the beer drinking public. 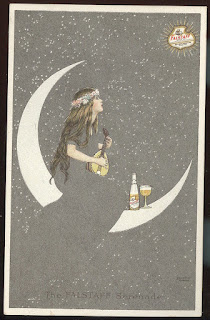 As with other successful symbols, Miller’s girl-in-the-moon had its imitators.  Falstaff Brewing had its roots in a brewery founded in 1940 in St. Louis by a German immigrant named Johann Adam Lemp.  The name was changed to Falstaff Brewing with the featured brew of the same name.  The company about 1910 issue a trade card called “The Falstaff Serenade.” drawn by Swedish-American artist, Valentine Sandberg.  The card shows a garlanded young woman playing a mandolin and singing to an shining Falstaff logo. 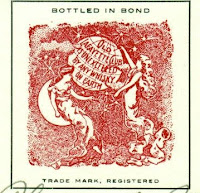 What was good enough for beer also provided a symbol for Lafayette Club Whiskey, trademarked with the federal government by the Frank Murphy Co. of Chillicothe, Ohio.  Murphy registered as a trade mark a woman in a gown sitting on a moon while another woman holds up a globe (presumably the earth) on which is written “Old Lafayette Club is unexcelled by any whiskey on earth.” 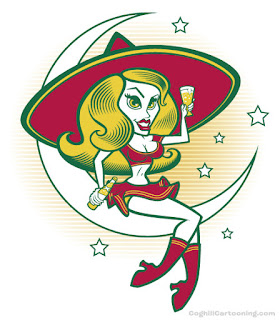 In addition to imitators any successful icon is sure to get its caricatures.  Such is the drawing here of the girl-in-the-moon.  The cartoon is by George Coghill who contends that Miller is one of his favorite beers and that after seeking a t-shirt with the image to no avail, so he made his own drawing after deciding she should look more “witch-like.”  On his website he wrote: “I also decided to give her a shorter skirt, as well as hike it up a bit and show more leg. She's also a bit more busty than the previous version. Definitely going for more of a pin-up style with her this time around.”

My guess is that the Miller girl-in-the-moon will be with us in one form or another for a very long time to come.  Having survived 110 years even as advertising fashions and social mores have changed massively, this icon has demonstrated staying power matched by few other ad symbols.  Whatever kind of epiphany Mr. Paul may have had, lost among the pines, it has proved to be a winner.