The Advertising Art of Milburn Wagons

Born and raised in Toledo, Ohio, from time to time I have featured its historic industries on this blog, including the Buckeye Brewery and Libby Glass, the latter a place I briefly worked.  Recently I have become interested in the story of the Milburn Wagon Company,  a manufacturer located in Toledo that grew from a small shop in Indiana to the largest wagon maker in the world.  This American industrial success story was fueled, at least in part, by the colorful trade cards Milburn used to advertise its products. 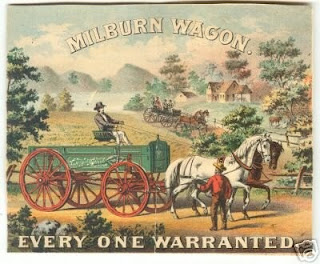 An excellent example is the multicolor lithographed trade above that shows two spirited, high stepping horses horses pulling a Milburn wagon within a bucolic  rural scene featuring mountains in the distance.  Note that the driver is seated well back from the front of the wagon. 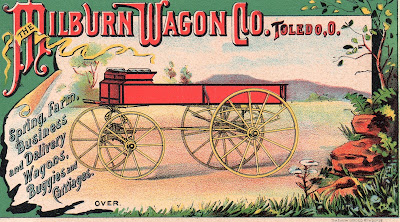 Contrast that seating with the Milburn card shown above.  This vehicle looks much more like a Western buckboard, the seat being located at the extreme front.  Although most company sales were east of the Mississippi, Milburn has been credited for its contributed on opening up the West for pioneers.   One trade publication in 1888 commented that:  “…They are shipping business wagons to almost every city east of the Rocky Mountains, and have a fine trade in the Mountains from Deadwood to Denver.” 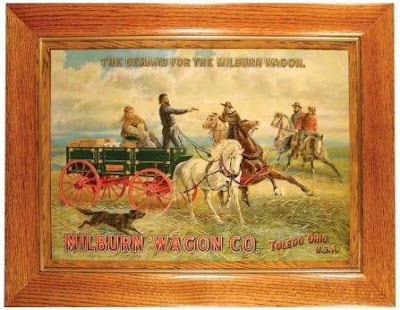 Capitalizing on the Western image, Milburn provided its dealers with a wall sign showing a settler, with his wife and baby aboard, holding off at pistol point a group of three raiders intent on stealing his wagon and horses.  The label on the sign tells the story:  “The Demand for the Milburn Wagon.”  The company also used this image, slightly altered, in its newspaper advertising. 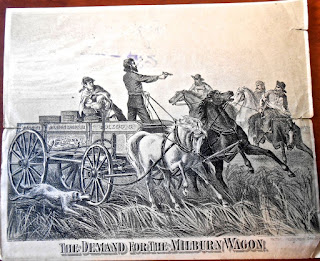 By this time the largest manufacturer of wagons in America, with worldwide sales,  Milburn Wagon had begun modestly, the endeavor of a British immigrant to the U.S. named George Milburn who tried farming and other pursuits before in 1867 investing in and later taking over an existing wagon works in Mishawaka, Indiana.  As business thrived, Milburn asked the town fathers to help defray the cost of building a railroad siding to his plant.  When they refused, he looked for a place to move. 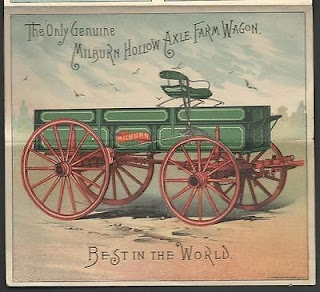 Toledo, always on the lookout for new businesses, proposed a stock offering that raised $300,000 from locals and offered a discounted piece of land located adjacent to a railroad for the factory.  Consequently in 1873 the Milburn Wagon Co. opened in Toledo.  A trade card like the one above might have a line drawing of the factory on its flip side. 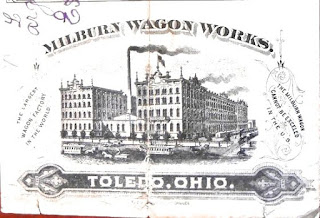 Before long Milburn Wagon Works were the largest wagon makers on the globe, with sales offices in nine American cities from Albany, New York, to San Antonio, Texas, and a customer base from Europe to Australia.  The manufacturing process was completely mechanized. requiring workers only to operate machines.  The average number of men employed at the factory ranged from 550 to 600.  By the mid-1800s Milburn was producing about 600 wagons a week in its Toledo plant, the equivalent of one finished wagon almost every 10 minutes— pre-dating the Detroit auto assembly lines. 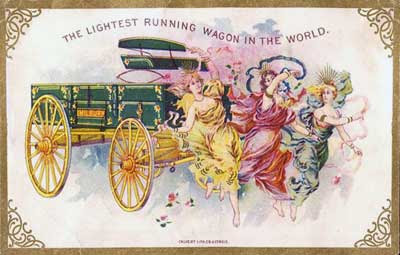 Moreover, the firm had pioneered in hollow axles that while still as strong as solid ones allowed them to term their wagons as “the lightest running in the world.”  That claim was backed up by a trade card of bevy of frisky young women drawing one. 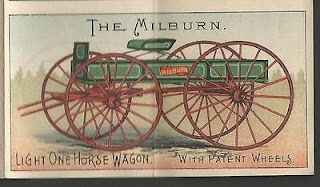 The company also had patented an improved type of wagon wheel that was lighter but strong.  Although most Milburn illustrations showed two horses pulling their rigs, the company also made a one-horse wagon.  Like others it is painted in a characteristic green with the Milburn name prominent on the side. 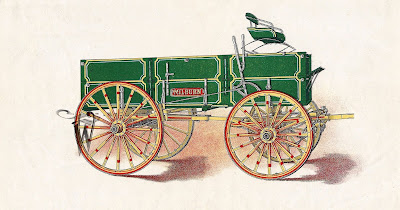 Another Milburn patent covered its braking system that allowed for easy parking of the wagon.  It was operated by the right hand of the driver who activated it by pulling foward on the rear level and released it with the front lever.  Well-built and simple in construction, these sturdy wagons could be purchased for as little a $150.  Little wonder that so many heading West did so on a Milburn. 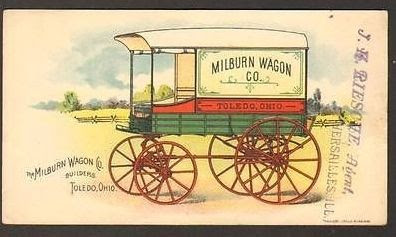 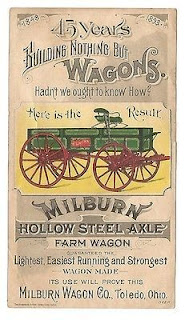 Featured is a trade card that states:  “45 years, building nothing but wagons, hadn’t we ought to know how?”  This was not entirely true;  as the years went by.  Milburn in Toledo began to build buggies and carriages.  Nor did the company miss a step when the automotive age meant the end of horse-drawn vehicles.  Between 1915 and 1923, the company made 4,000 electric cars as well as auto-bodies for other Midwest manufacturers.  In 1923 the Milburn era ended when its works were purchased by General Motors for its Buick division.

An entire book could be written about the history of the Milburn Wagon Company,  As a Toledo boy who arrived long after the firm’s demise, however,  I want to remember the company as the source of innovative multi-hued advertising that continues to remind us of an America when things were a lot simpler.

Note:   This is not the first time I have displayed my penchant for wagons.  On October 12, 2013, on this blog I posted an article entitled, “Circle the Wagons” (Under Glass) that featured a group of ten glass paperweights with a variety of wagon images on them.

Regarding the Drunk and the Light Pole

Along with noted British author and social critic, George Orwell, I have been fascinated by comic postcards — a dying art in the era of political correctness.  In April 2013 on this blog I featured cards that employed beer or whiskey barrels as part of their humorous motif.  Subsequently my efforts have been to collect images that depict inebriated gentlemen and light poles. 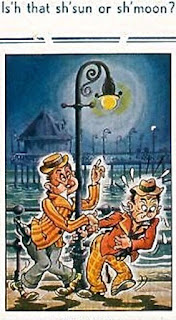 The postcard shown right epitomizes the genre.  Two drunks are languishing under a street light, apparently at the edge of a body of water.   Both are depicted as heavily intoxicated, one with a whiskey bottle sticking out of his back pocket, also a frequent image.  One drunk is asking the other in liquor-slurred speech whether the glaring bulb is the sun or the moon. 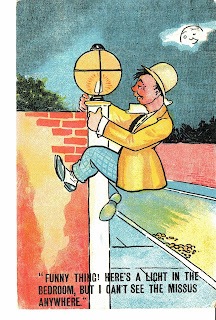 On this next postcard the drunk, well dressed but with his clothes disheveled, has climbed the light pole and is contemplating the bulb.  So impaired is he that he has mistaken the light as emanating from his bedroom, where his “missus” seemingly is waiting for him.   In the context of these cards, she will have a rolling pin in her hand to whack him.

In this postcard a bowler-hatted gent, who does not appear to be drunk, admonishes the light pole to “lead kindly light.”  The reference is to a favorite Protestant hymn, whose first verse seems entirely appropriate to the scene: 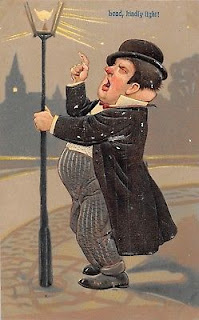 Lead kindly Light, amidst the grey and gloom
The night is long and I am far from home
Here in the dark, I do not ask to see
The path ahead, one step enough for me
Lead on, lead on, kindly Light.
My guess, however, is that the Prohibitionist crowd of the day would have considered the postcard to be sacrilegious. 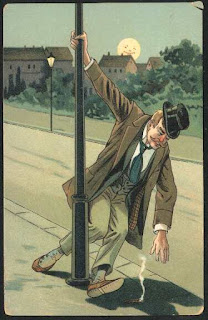 Postcards did not hesitate to make an object of derision the rich and well-born who had too much to drink.  Shown here is an illustration of a distinguished-looking gentleman in top hat, vest and coat who is holding on to a pole in an attempt to retrieve a cigar that in his alcoholic haze he has dropped.  No words are necessary to convey the humor of this situation.

The next postcard animates the light poles as welcoming companions to a gentleman who appears to need them to keep upright.  In a world turned topsy turvy all around him, he declares:  “I am making new acquaintances.”  Yet it is only 10 P.M. with many more hours of possible drinking ahead.  He apparently will be moving from light post to light post — going somewhere. 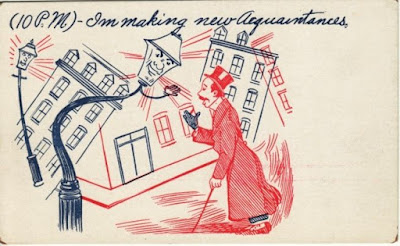 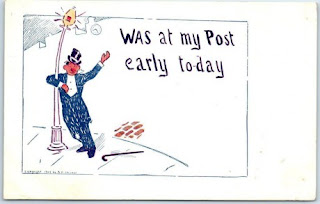 Another drunkard has found his light pole, is proud of the location and apparently sticking with it.  He brags:  “Was at my post early today.”   The clock on the wall behind him confirms that he has had an early evening of drinking.  It registers 8:25 P.M.  Not so long ago such postcards could be found at newsstands, drug stores and souvenir stores all across America.  Today they are a vanishing breed. 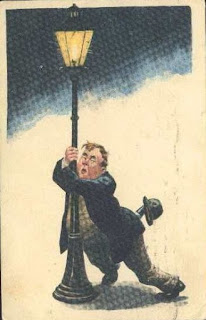 The light pole and the drunk are not just an American icon.  The image exists on comic cards in other countries as well.  Shown here is an example from Estonia, typical of the drunk who must hold tight to the light pole to prevent falling on the pavement.  No, he has not grown a tail.  That is a bottle of whiskey poking from his backside on which he has hung his hat. 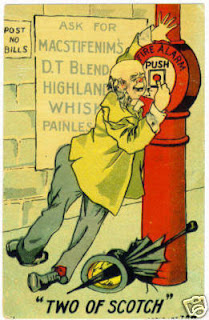 A second overseas postcard comes from Scotland.  Here a bald drunk is pushing a fire alarm on a pole apparently thinking that he thereby can order up two drinks of scotch. Behind him a sign advertises “MacStifenims D.T. Blend Highland Whiskey.”   Presumably it is his drink of choice.  Note that in his alcoholic haze the Scotsman has stuck the tip of his umbrella clear through the crown of his hat. 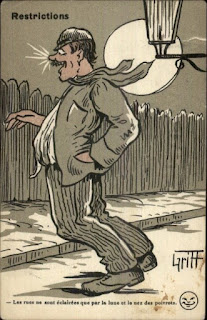 The French have their own versions of the theme.  Shown here is a French workman who seems to be marveling at the scene around him.  A glow seems to be emanating from the moon, a street lamp and the man’s nose.  The caption at the bottom in translation reads:  “The streets are never so bright as by the moon and the nose of the drunk.”

With the postcard below, we receive not only the image of a highly inebriated man hanging on to a light pole but also his protestation that  that “I’m Not Imbricated” and a semi-rhyming diatribe that ends with “But the drunker I stand here the longer I get.”  The dog in the picture has it right — all this is very silly.  But the genre demanded it. 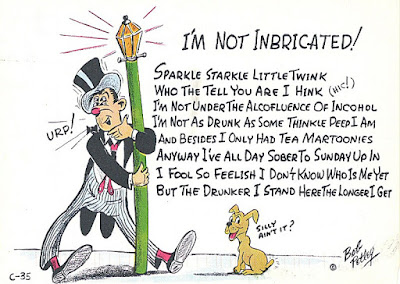 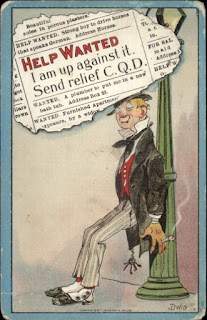 At least equally silly is the 1909 postcard of a drunk leaning up against a lamp post, smoking a cigar and with keys dangling.  A clipping from the want ad section of a newspaper provides the caption:  “Help wanted. I am up against it.”   Even sillier is the want ad above it:  “Strong boy to drive horses that speak German.  Address Horses.”

The final postcard shows a figure who is very familiar to us by now.  He is a well-dressed man in suit and vest who is carrying a partially empty flask of whiskey and along the line has damaged his top hat.  With a different message this might have been another comic version of the drunk and the light pole.  But the message sets a different tone.  It suggests to “U. Boozer” that common sense and will power should lead to abstinence:  “Let it alone.”  The card may well have originated from prohibitionary advocates as an antidote to the comic postcard portrayals of drunks. 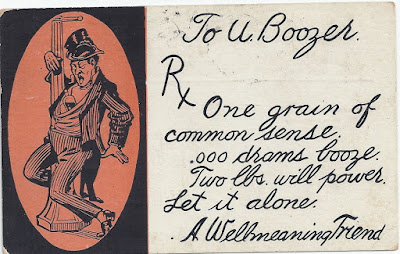 Whatever cultural norms once made these postcards an appropriate message to absent relatives and friends have long since disappeared from American life.  We no longer see inebriation as a matter of fun and laughter.  The evils of alcoholism are all too prevalent in society.  As artifacts of a not-so-distant past, however, they recreate a time when humor still could found in a drunk hanging on to a light pole.

Posted by Jack Sullivan at 6:28 AM No comments: