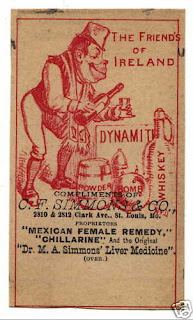 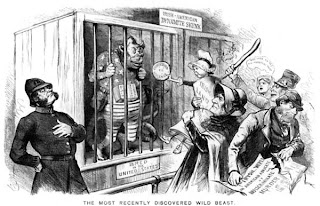 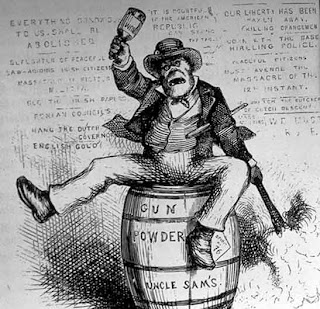 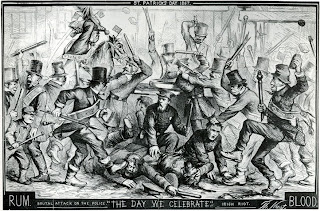 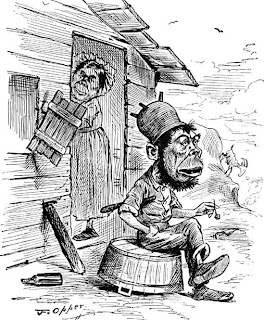 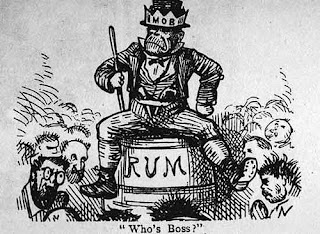 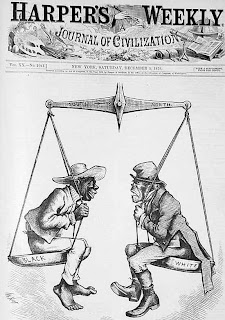 As St. Patrick’s Day approaches with its parades and parties, a time some say when everyone wants to be Irish, it is instructive to look back on a time, not so long ago, when it was quite different for immigrants from the Auld Sod. My Irish grandmother, born in Ohio about the time of the Civil War remembered the signs in her home town: “Man Wanted, No Irish Need Apply.” Prejudice against Irish was rampant throughout the United States in the 1800s and into the early 1900s.

Vivid evidence is a trade card from a St. Louis, Missouri, peddler of quack nostrums, that shows an Irishman, simian in looks, with dynamite and whiskey. It is entitled “The Friends of Ireland.” This card was circulated by a Bellevue, Ohio, pharmacy -- a town where also lived some of my Irish relatives. Irish at the time were about 12% of the population of Bellevue. Remember that trade cards were advertising pieces, meant to attract customers, not insult them.

That trade card seems tame, however, when compared to other cartoon images of the Irish in those times. “The most recently discovered wild beast” is the caption for a cartoon of an animal-like figure staring out of a cage bearing a sign: “Irish American Dynamite Skunk.” Around him are other Irish folks, apparently giving him support, while a policeman looks on in indifference. Truly it is a shocking image of an individual “bred in the United States,” as a second sign indicates.

Liquor and violence were the attributes of the Irish, if illustrations of the times are to be believed. Shown here is a cartoon of a monkey-like Irishman who brandishes a rum bottle in one hand and a flaming torch in the other, sitting on a barrel of gun powder. He is a clear and present threat to all right thinking Americans.

It was not only anonymous illustrators who were preaching the anti-Irish sermons of the time, but also well-recognized cartoonists. Thomas Nast, famous for helping to expose the corrupt Tammany Hall in New York City, was a determined foe of the Irish. In his drawing of an 1867 incident Nast depicts the rapacious Irish rioting against and defeating the forces of law and order.

Frederick Opper, who later gained national fame and fortune as the cartoonist creator of Happy Hooligan, was another artist skilled at Irish bashing. In a cartoon, captioned "A King of Shanty," he mocks Irish poverty, caricatures Irish people as ape like and primitive. This cartoon irishman has, again, the out-thrust mouth, sloping forehead, and flat wide nose of the standard Irish caricature. Note too that the man wears a cooking pot on his head.

Yet the Irishman had a vote in democratic America and the fear of mob rule was evident in depiction's of Irish and their leaders. The cartoon “Who’s Boss?” is meant to convey the idea that these less-than-human creatures were dictating the national policy on the drinking of alcohol. Mob rule, led by Irish, was thwarting the efforts of Prohibitionists.

One of the most telling images of the Irish appeared in the December 9, 1876, issue of Harper’s Weekly, which self-congratulated itself as “A Journal of Civilization.” There the Irishman is equated on a scale with a black man. The clear idea is that as the blacks were a curse on the South, so the Irish were a curse on the North.

At the age of 96 my Grandmother subscribed to Ebony magazine and strongly espoused the civil rights movement for African-Americans. When I asked her why, she said she remembered well the time when “No Irish need apply’.”
Posted by Jack Sullivan at 2:20 PM No comments: