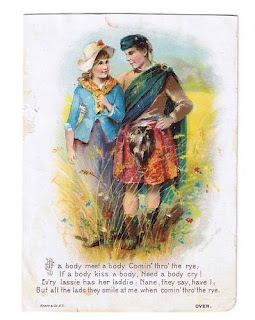 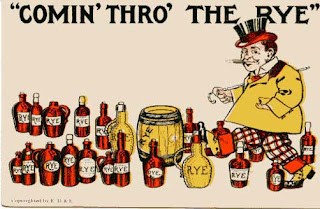 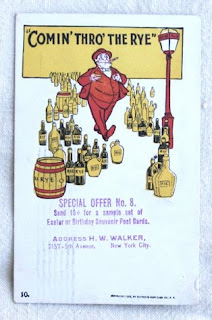 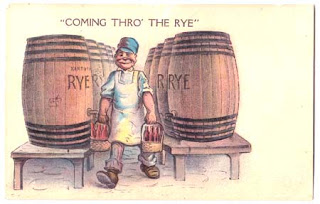 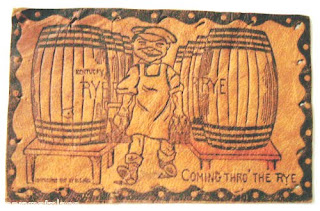 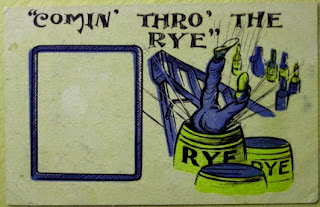 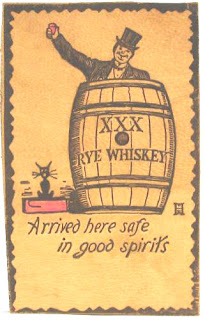 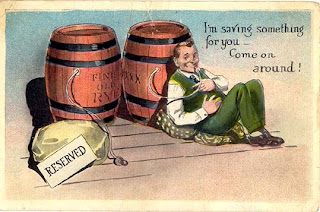 In 1782, the Scottish poet Robert Burns (1759-1796) wrote a poem that spoke of the sweetness of young love. It is the inquiry of a young swain of his girl friend that if they should happen to meet while walking through a field of grain, and he should kiss her, would her eyes well up in tears? The scene and the verse is shown on a Victorian-era trade card. Ironically, this image was issued by a company selling a laxative called “Sanative Pills.”

Through the years I have collected a number of pre-Prohibition postcards that use the same mantra -- “Comin’ Thro'’ the Rye” -- referring to liquor. Rye whiskey themes show up frequently citing Burn’s lyric and in related guises. The first example is of a well-dressed gentleman with plaid trousers strolling through bottles, flagons and one barrel, all marked “rye.” From the plaid we can assume, I suppose, that he is a Scot.

A very similar image follows. This time the gent is smoking a cigar and from the cut of his jaw the individual is Irish and, under the circumstances, clearly someone who imbibes. The lineup of rye containers he is negotiating includes bottles, flagons and, in this case, two barrels.

In the next card, the barrels have taken the spotlight and the bottles are small. We apparently are looking at a distillery worker who has filled them and is taking them off for sale -- or something. A very similar image was provided by a leather postcard. For a time in the early 1900s leather was a very popular medium for sending images through the mails.

The subsequent card continues the theme. Here the barrels are open and the worker, or a very thirsty person, has by chance or luck fallen into one. In the following card a gent with a top hat has emerged from a barrel of rye whiskey proclaiming that he “arrived here in good spirits.” This card also was tooled on leather.

In the final example, a gent in a vest is resting on a cushion, back to a barrel and sucking from it on a nursing nipple. The container is marked “Fine Old Rye.” Next to him is another cushion and “reserved” nipple. The message is: “I’m saving some for you -- Come on around.”

Rye whiskey cards were fairly common prior to Prohibition. Their frequency was indicative of the strong popularity of that form of spirits for much of the Nation’s history. The fall of rye in popularity with the drinking public since Repeal and the ascendancy of bourbon has been laid to many causes. My own view is that it was not so much the changing taste of the American drinking public as the identification of “rye” with an inferior kind of liquor sold in speakeasies during Prohibition.
Posted by Jack Sullivan at 11:21 AM No comments: 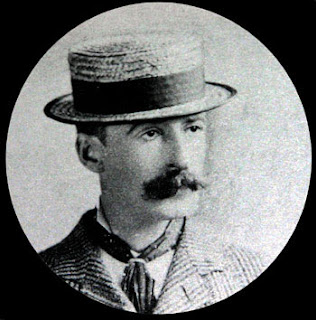 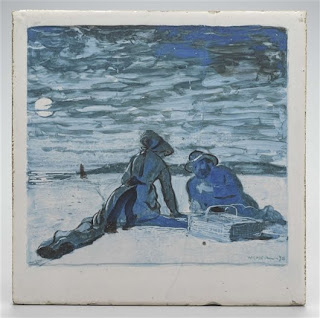 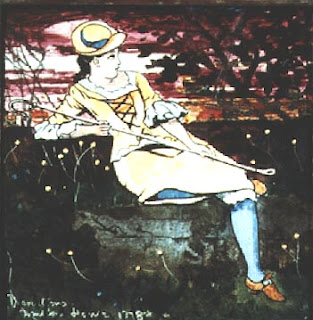 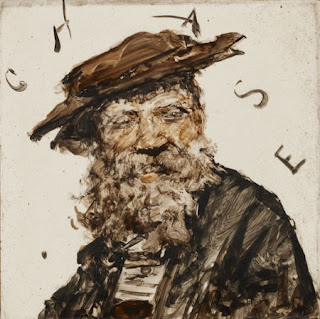 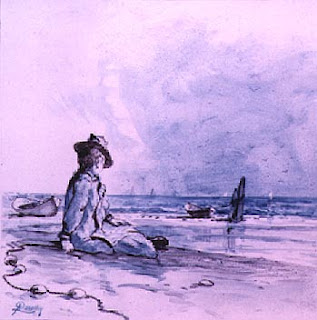 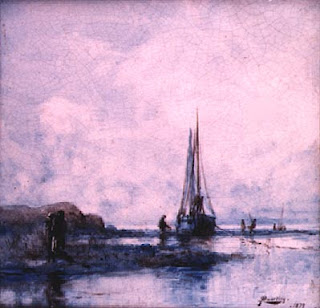 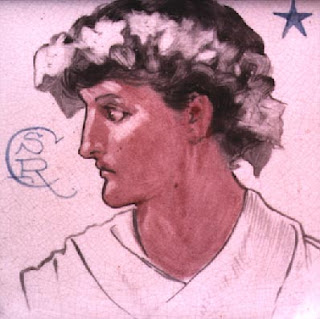 In keeping with my strong interest in art tiles, demonstrated in prior posts, I have been fascinated with a decade-long movement of American artists in the 19lth Century to paint on ceramic tiles, a movement that included one of our Nation’s foremost painters, Winslow Homer, pictured here.

The Tile Club was founded in the fall of 1877 in New York by a group of young artists and journalists who had been meeting informally from time to time to discuss art. Homer, an established artist at this point, was a charter member. As it evolved, the Club membership was held to twelve. When members left new ones were admitted by unanimous vote.

The Club was a highly fraternal and cordial type. There were no bylaws, officers, rituals, initiation or other fees. Initially the group met weekly at a member’s studio to, as the name implies, paint on tiles -- something none of them had done before. As detailed in a book by Ronald G. Pisano entitled “The Tile Club and the Aesthetic Movement in America,” the Club jointly agreed to undertake tile decoration and were pleased with the results of the experiment.

In addition to their studio work, the Tile Club took summer outings to the beach, both for camaraderie and to paint. Their hi-jinks and excursions soon caught the fancy of the American press. Scribner’s Monthly of February 1879 featured a story of a Club outing to Long Island that had occurred in June of the previous year. It was captured in a ink drawing entitled “Ye Tilers in Procession.”

Homer (1836-1910) is accounted the most adventurous tile painter of the group. In addition to his use of bright colors on ceramics, he was prolific. Among Homer’s works are six known single tiles, one plaque and two fireplace murals. The first three examples shown here are from the master.

Chase, a young colleague of Homer, would make his reputation as an outstanding American Impressionist. He produced several tiles, including one of an old man in a flat hat, done in 1879, Chase (1849-1916) added his own name into the image before firing it. Today it is in the collection of the Hecksher Museum in Huntington, New York.

Quartly (1839-1886) was an American painter best known for his seascapes. Two of his tiles are shown here, a single tile entitled “Girl on the Beach” and a door panel depicting a fishing boat. Both were done with a limited pallet and indicate Quartly’s fascination with the marine environment.

The final tile is from Reinhart (1844-1896). Born in Pittsburgh, he later operated a studio in Paris. His reputation was largely for his pen and ink drawings many of which illustrated books and other publications of the times. For the Tile Club he created a door panel that included a heroic head and his initials.

With the publication in 1887 of an elegant “A Book of the Tile Club” by its members and the concurrent loss of its meeting place in a New York brownstone, the organization effectively came to an end. In terms of American art history the Club must be seen as a blip on the screen. At the same time the art works members left behind, including a number of tiles, demonstrate that good art can be achieved while having a good time.
Posted by Jack Sullivan at 2:32 PM No comments: