Today when anyone mentions the NRA, the natural reaction is to think about guns.  In the early 1930s, the initials meant something entirely different to Americans.  That NRA — the National Recovery Act — was an attempt by the Administration of President Franklin Roosevelt to get the U.S. economy working again during the the Great Depression.

When Congress passed the legislation on June 16, 1933 — 83 years ago this month — many thought its proposed stimulation of industry and recuperation of consumer purchasing power were the keys to economic recovery.  But an image was needed to represent this NRA and thus was born one of the most iconic symbols of American history — The Blue Eagle. 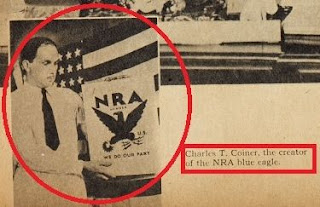 Enter Charles Toucey Coiner, an artist and advertising director for the Philadelphia-based N.W. Ayer & Son advertising agency.  When the Administrator of the National Recovery Act (NRA) was dissatisfied with designs presented by Ayer, Coiner, shown left, himself designed the Blue Eagle symbol that is closely associated with the NRA.  It became a very popular icon of a hope for a country in the midst of a massive economic crisis.  The symbol was displayed by industries and businesses who had accepted the NRA codes of operation that attempted to boost the economy while protecting rights of workers. 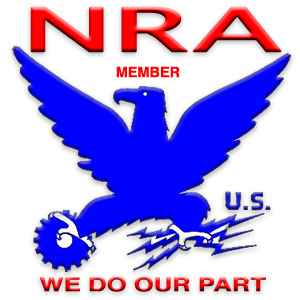 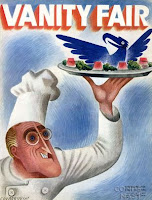 As always, cartoonists had a field day depicting the colorful avian.  The November 1934 Vanity Fair magazine featured a cover depicting Roosevelt as a chef serving up a blue avian on a platter.  The eagle even seems happy about being someone’s dinner.

A more serious cartoon showed Uncle Sam looking at a manufacturing district labeled “all industry” with the NRA eagle perched on his arm.  The caption read “The Hunter’s Falcon,”  suggesting that the bird would swoop down on even those companies unwilling to cooperate.

The country seemed to go through an NRA craze.  Note the triplets wearing jaunty hats and belted dresses whose mother has sewed the appropriate letters on their skirts.  Of course, if the lass at the left had moved to the right side, the letters would have read “RAN,”  making even less sense.

Older girls also celebrated the NRA and its eagle.  Here are three genuine bathing beauties who have been able to transfer a pale eagle within their summer tans.  The slogan of the NRA was “We do our part.”  In this case the ladies have offered up a body part.   One hopes they avoided a sunburn. 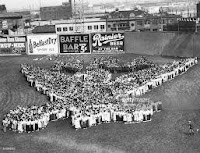 In San Francisco, several thousand school kids turned out in a ballpark to create the outline of the world’s largest NRA Eagle.  Some wore blue.  It was all part of a  national effort to create enthusiasm for a program that sometimes worked and more often did not. 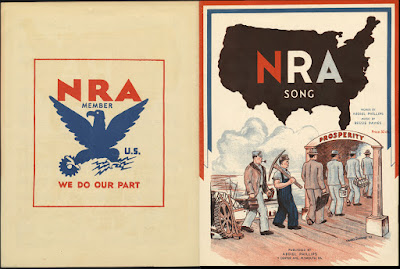 Of course an icon would not be an icon without a song about it.  Abdiel Phillips and Bessie Davies were happy to oblige with a ditty they entitled simply “NRA Song.”  Bill Cox wrote a country-style song he called “NRA Blues.”  It was aimed at the workers against the bosses and included these lines: 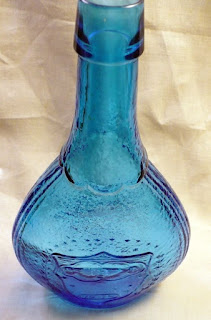 As shown above, glass is always a good touch in memorializing a icon.  This one looks hand-blown and carries a shield with two eagle heads, in a carafe type bottle that is, of course, blue. 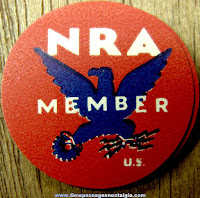 By joining the NRA, one merited a button  The one shown here presented the blue eagle on a red background and white letters.  The obvious message: “red, white and blue” patriotism.  Businesses who accepted the NRA “codes of conduct” could put an appropriate sign in the front window of their establishments.   The President’s wife, Eleanor Roosevelt, was photographed with a handful of nails, presumably helping a woman nail up the blue eagle. 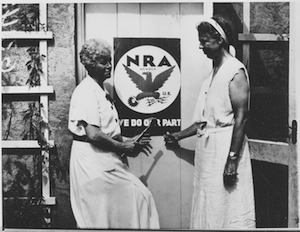 For all this hoopla, the National Recovery Act, while popular with workers, found some of the two million businesses who carried the blue eagle did not really follow the regulations it entailed.  During its brief life, the NRA did not achieve its goals of reemployment and recovery and too often failed to take action against recalcitrant businesses displaying the blue eagle.  In 1936 this attempt at a “guided economy” was struck down as unconstitutional by the U.S. Supreme Court.  The blue eagle would fly no more — its legacy the many objects and images that remind us of that short but highly unusual era in American history.

Posted by Jack Sullivan at 2:53 PM No comments:

Through the Years with Fred Sehring Beer Ceramics 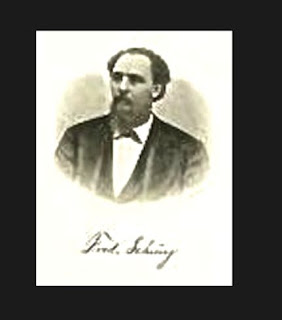 Never before or since, to my knowledge, has a brewery over a span approaching a decade issued a series of dated steins and mugs.  The Fred Sehring Brewery of Joliet, Illinois, from 1900 through 1908 annually commissioned Hugo Theumler of Pittsburgh to provide it with a new items for gifting to favored customers.    By that time, brewery founder Frederick Sehring, an immigrant from Germany, shown here, had died.  His son, Louis, took the reins of management and may be assumed to have given the orders for the ceramics, and likely approved the designs. 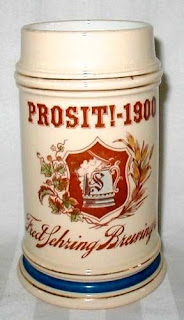 The first in the series, a stein, celebrated the Turn of the Century.  Nationally the 20th Century had been ushered in with great fanfare and Louis had caught the spirit. “Prosit! - 1900,” it reads.  This was a traditional German toast, indicating “to your good health” with a tankard raised high.  The decor also has the trademark of the Sehring Brewery, a shield with a foaming stein marked with an “S” rampant.  Stalks of wheat and sprigs of hops surround the shield. 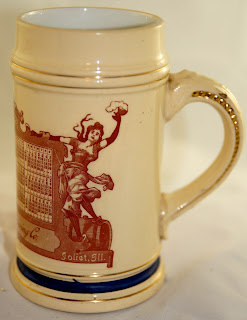 The following year Sehring adopted a calendar motif.  The elaborate label includes, as shown here, a woman whose twisted body indicates a flamboyant mood as she lifts high a foaming goblet while straddling a wooden keg.   A monkish figure graced the other side of the 1901 calendar.  He has his arm around a beer keg.  The elaborate transfer-printed design is typical of the artistic and technical capacity of the Theumler factory. 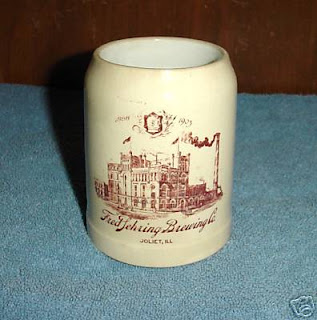 For some reason for years I was unable to locate a 1902 Sehring issue.  Then in 2020 three were sold at auction, each has a picture of a woman seemingly bursting through the ceramic, an image that Theumler also used on a whiskey flask.

In 1903 the company replaced the stein format with a beer mug.  This one bears an illustration of the Joliet brewery, replete with dark smoke coming from a stack.  While such a picture today might indicate air pollution, at that time such plumes indicated that the brewery was operating full out. 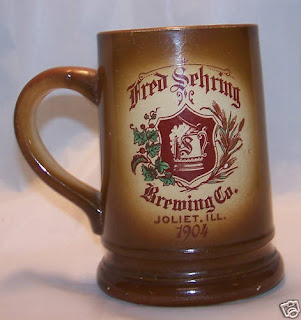 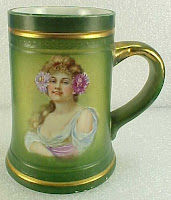 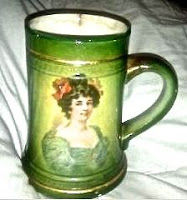 In 1905, the front of the stein was a repeat of the 1904 stein.  The obverse, however, held portraits of lovely young women displaying considerable cleavage and a saucy manner.  In a departure from the past these Sehring steins were trimmed in gold with gold handles.  I am particularly fond of the woman at right who seems to have “bee-sting lips” and  two purple camellias in her hair.  Very fetching, indeed. 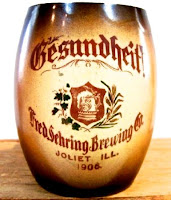 The 1906 mug had an unusual label.  The lead word is “Gezundheit,”  literally meaning “God bless you,”  usually said when someone has sneezed.  This raises the issue of whether Fred Sehring Brewing Co. thought their beer would make people sneeze.  This mug carries the same glaze and logo that bedecks the offerings for 1904 and 1905. 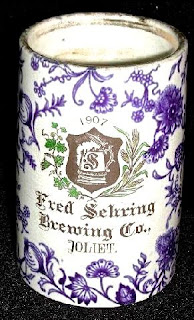 My personal favorite among the Sehring offerings is the 1907 stein.  It is decorated in a Chinese blue and white motif that features a number of idealized flowers of varying sizes. If it were not for the Fred Sehring logo and “Joliet” to guide us, we might thing ourselves back in the late Ming Dynasty.   It is a truly elegant cup from which to drink beer.

The last stein in the series is celebrates the anniversary of the firm, founded by Frederick Sehring in 1868.  It was issued by the brewery in two styles, one with the letters spelling “Sehring” in deep red, matching the familiar logo and a second   in which the letters are hollow.  Both stein wish “greetings” to the drinker, perhaps not as compelling as “prosit,” but better than “gezundheit.”

In contemplating this array of steins and jugs I am curious about the decisions that went into approving the designs for each, year by year.  As to why the series stopped in 1908, we might look to the death of Hugo Theumler in September 1908 apparently of “acute indigestion.”  With his passing production in Pittsburgh ceased and and all references to the firm disappeared.  Nonetheless, the Sehring brewery has given us a unique series of stein and mugs.  Happy the collector who can line them up, year by year, on a display shelf.