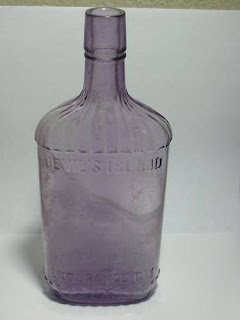 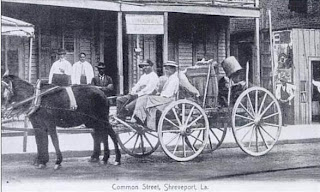 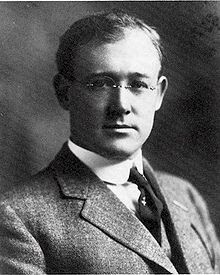 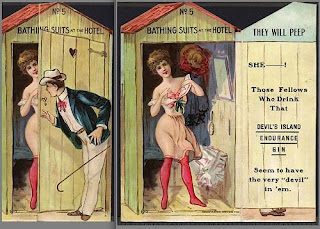 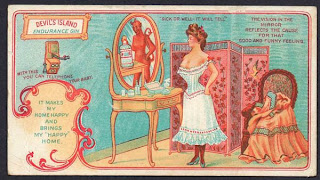 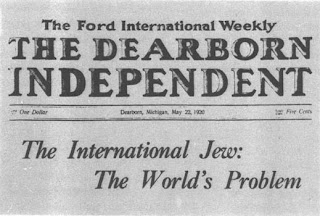 The murder and its aftermath garnered national headlines. Three years later a prominent muckraking American journalist, Will Irwin, writing in Collier’s Weekly of May 16, 1908, used the incident to indict the saloon trade and in particular inexpensive gin that was being produced by Northern distilleries and, as Irwin saw it, “sold in the low dives of all the black belt from the Carolinas to Louisiana and Mississippi.” .

Irwin, shown here, also blamed the names and advertising for brands of gin as suggesting that they possessed the properties of aphrodisiacs. “The gin was cheap, its labels bore lascivious suggestions and were decorated with highly indecent portraiture of white women.” Implicit was his conclusion that this liquor was responsible for sexual aggression in Coleman and other blacks. The journalist singled out for special attention Devil’s Island Endurance Gin. In quart bottles, like the one shown here, it sold for $1.

Two of the brand’s early 1900s trade cards seem to bear out Irwin’s contentions. The first shows a man peeking into a woman’s beach dressing room where it is not clear how much clothing she has on. Opened, she is seen wearing a bathing suit and seems little disturbed about being watched and says: “Those fellows who drink that Devil’s Island Endurance Gin seem to have the very “devil’ in them.” Note that from the shadows, Satan is watching. The second trade card shows a woman in the process of undressing, with scads of bosom showing. She sees the devil in the mirror with a large bottle of gin. The liquor is credited with giving “that good and funny feeling” and other positive effects. This gin clearly was being merchandised as a stimulant for something.

Devil’s Island Endurance Gin was a product of Dreyfuss, Weil & Co. of Paducah, Kentucky, which registered the trade name in 1905. In business from 1887 until 1918 and the coming of Prohibition, the company was both a distiller and distributor of a wide number of liquor brands, chiefly whiskey. One of its ads boasted that Devil’s Island Endurance Gin was made from a secret European formula and that by its third year in production 7,619,410 bottles had been sold in the U.S.

Irwin’s linking of Devil’s Island Endurance Gin and the Lear murder, caught the attention of one of America most prominent industrialists and millionaires, Henry Ford. A notorious anti-Semite,Ford did a ghost-written weekly column for a newspaper he owned, the Dearborn Independent. On the assumption that Dreyfuss and Weil were Jewish, he used the article to rail against liquor trade for selling the “products of Jewish poisoned liquor factories.” The Jewish race, he more than implied, was responsible for lawless actions of the Negro race. One derogatory racial stereotype thereby became the occasion for another.

As for Coleman, guilty or not, he was nearly killed by a white lynch mob and the Louisiana militia had to be called out to protect him. Within nine days after the crime, according to newspaper reports, he was tried in a Shreveport court, found guilty, and “legally” executed. The New York Times reported that the Governor of Louisiana was expected to be in attendance at the hanging. Another stanza of Syke’s 1933 lyrics for Devil’s Island Gin Blues goes like this: 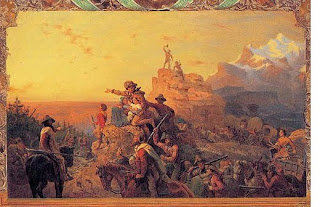 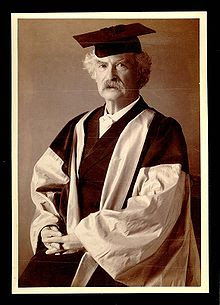 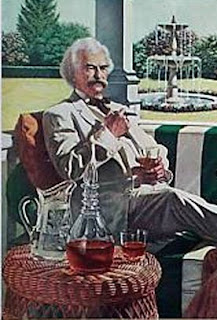 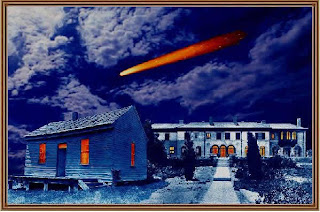 Several years ago I published an article on Mark Twain, as the “patron saint” of American whiskey, one that subsequently was reprinted in my most recent book, Mostly Whiskey. With the 100th anniversary of Twain’s death approaching during April, 2010, it seems appropriate to devote attention once again to this giant of American literature and his love of Kentucky bourbon.

More than any other writer in the Nation’s history, Samuel Clemens aka Twain celebrated whiskey as the national drink of choice. He has been quoted saying: “Whiskey is for drinking; water is for fighting over.”

Twain’s most notable tribute to whiskey was an elaborate spoof on a patriotic saying known to young and old of his time: “Westward the course of empire takes its way....” Originally penned by an obscure American poet, the quote was reprinted frequently. It also became the title and theme of an famous 1861 painting, shown here, that still adorns a stairway in the U.S. Capitol. Put simply, the quotation implies that the United States was destined to move west and create an new empire in North America.

For Twain, who made a career out of debunking overly romantic notions, the driving force behind American expansion was not empire-building but whiskey. In his autobiographical book, “Life on the Mississippi,” the author took issue with the well known motto. It should have been, he said: “Westward the Jug of Empire takes its way.” Twain explained:
“How solemn and beautiful is the thought, that the earliest pioneer of civilization, the van-leader of civilization, is never the steamboat, never the railroad, never the newspaper, never the Sabbath-school, never the missionary--but always whiskey! Such is the case. Look history over; you will see. The missionary comes after the whiskey-- I mean he arrives after the whiskey has arrived; next comes the poor immigrant, with ax and hoe and rifle; next, the trader; next, the miscellaneous rush; next, the gambler, the desperado, the highwayman, and all their kindred in sin of both sexes; and next, the smart chap who has bought up an old grant that covers all the land; this brings the lawyer tribe; the vigilance committee brings the undertaker. All these interests bring the newspaper; the newspaper starts up politics and a railroad; all hands turn to and build a church and a jail-- and behold, civilization is established forever in the land. But whiskey, you see, was the van-leader in this beneficent work.”

But Twain/Clemens was not merely a man of words about whiskey. While not given to overindulging, his fondness for bourbon was well known. During his brief career as a journalist in Washington about 1868, Twain agreed to share expenses with a roommate with a similar taste for whiskey. Their total joint income per week was $24. In his autobiography he recounts: “Twenty four dollars a week would really have been riches to us if hadn’t had to support that jug; because of the jug we were always always sailing pretty close to the wind....”

When a friend sent him a case of whiskey, Twain’s thank-you note ran this way: “The whiskey arrived in due course...; last week one bottle of it was extracted from the wood and inserted in me, on the installment plan, with this result: that I believe it to be the best, smoothest whiskey now on the planet.”

In his later years, while in England on a lecture tour and to receive an honorary degree from Oxford University, shown here. Twain remarked to companions that despite enjoying their company he badly missed the taste of Kentucky bourbon. To accommodate him, his friends imported six cases and even switched from Scotch to help him drink it. Old Crow whiskey, claiming Twain for their own, ran a series of ads in the 1960s around his personna, including one with glass in hand and decanter nearby.

Twain was born two weeks after the approach to earth of Halley’s Comet. In 1909, the author predicted: “I came in with Halley’s Comet in 1835. It is coming again next year and I expect to go out with it....The Almighty has said, no doubt: ‘Now here are these two unaccountable freaks; they came in together, they must go out together.” Prophetically, Twain died on April 17, 1910, reputedly one day after the comet’s closest approach to earth.

As shown here, lensman Dave Thomson has created a photo montage of Twain’s birthplace in Missouri; his home in Redding, Connecticut, where he died; and Halley’s Comet. The only important item missing from Thomson’s picture, to my mind, is a bottle of Kentucky bourbon.
Posted by Jack Sullivan at 9:29 AM No comments: