The recent release of the motion picture “Ford vs. Ferrari,” based on the race car rivalry of the two automotive companies at Le Mans in 1966, has reminded me of the intense excitement races between two major competitors can engender with the public.  The “Great Steamship Race” on Lake Erie in 1901 between the “City of Erie” and “Tashmoo” is a prime example. 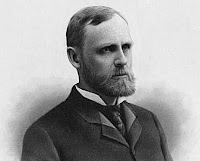 The initial irony of this race is that both contestants were the brainchild of a single marine engineer, architect and designer.  Shown left, he was Frank E. Kirby, born in Cleveland, Ohio, who migrated to Detroit, Michigan, where he became a major figure in shipbuilding. Said an effusive contemporary biography:  “Nearly one hundred of the largest craft upon our grand rivers and noble rivers are of his architecture and design, marvels of their kind and monuments to his ingenuity and skills.”  They included the City of Erie shown below in a postcard view plying Lake Erie. 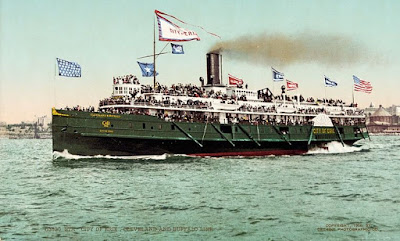 Shown left under construction, The City of Erie, was launched in 1898 by the Detroit Dry Dock Company for the Cleveland Buffalo Transit Company. It is shown left under construction.  The City of Erie's usual route was from Cleveland to Erie Pennsylvania, and on to Buffalo, New York. It was nicknamed the "Honeymoon Special" from the number of newlyweds who travelled to Buffalo, bound for Niagara Falls. 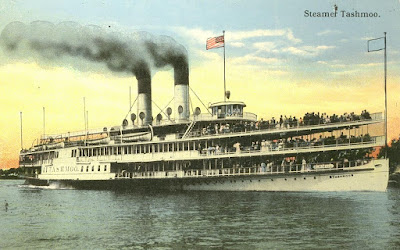 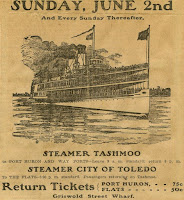 The Tashmoo was built two years later at a Michigan shipyard for Detroit’s White Star Line and launched on December 31, 1899. Tashmoo was nicknamed the "White Flyer" and, because of the number of windows on the ship, the "Glass Hack.”  As shown here on a White Star Line flyer, the Tashmoo's regular route was the sixty miles from Detroit to Port Huron, Michigan, making several stops along the way.  The photo below shows it leaving  port with hundreds of passengers.  Note that roundtrip tickets cost only 75 cents. 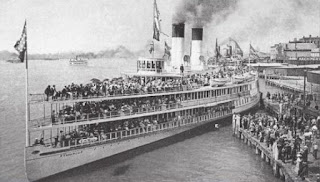 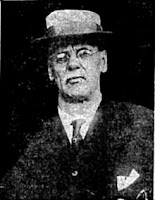 The idea for a race arose in 1900 when two steamships on Lake Michigan engaged in a friendly duel and a Chicago newspaper branded both as “fastest on the Great Lakes.”  That claim was disputed vigorously in other newspapers.  The president of Detroit's White Star Line offered $1,000 to any ship that could beat the Tashmoo in a race. Shown here, J. W. Wescott, president of the C&B Transit Co. accepted the challenge. The course agreed on was 82 nautical miles (152 km; 94 mi) long, following the City of Erie's regular route from Cleveland to Erie.

News of the race engendered tremendous excitement, not only around the Great Lakes but nationwide.  The Detroit Free Press branded it the “greatest steamboat contest in the history of American navigation.”  The amount of money bet on the race was estimated to reach $100,000 — equivalent to at least $2.2 million today.  Michigan bettors were known to have plunked down at least a quarter of that amount.  Which ship Frank Kirby might have favored has gone unrecorded. 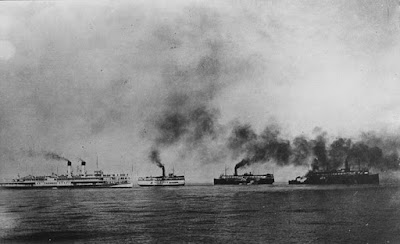 On the day of the race thousands of people lined the shores of Lake Erie from Cleveland to Erie.  Thousands more crowded the railings of boats, large and small, anchored on the water along the race path.  A photo shows the steamers facing off as the gunshot signaling the start was anticipated.  The longer Tashmoo is far left, City of Erie next to it.

The race was timed with the City of Erie moving first.  But the faster Tashmoo soon overtook its rival steamer and passed it.  The Detroit Free Press described the scene below decks on both ships:  “It was an awful strain on the crews of both boats,  For five hours the engine room crews were shut in a hell hole….The heat was terrific….Strong men, subjected to the intense heat, became weak as babies, yet when told to surrender their shovels to others, refusing as they struggled gamely on.” 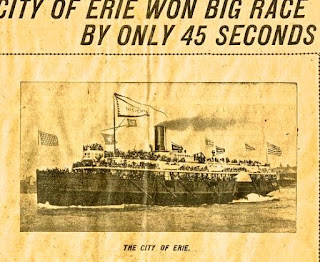 As the race progressed and the ships were out of sight of the shore, however, Tashmoo slowed, reputedly because the wheelman was not accustomed to steering only by compass.  The City of Erie steamed past.  With the shoreline visible again, the Tashmoo rapidly gained ground until an overheating condenser slowed it a second time.  In the end, the City of Erie won the race by a mere 45 seconds.  Tashmoo, however, was reckoned the faster steamer.  Some blamed its loss as a jinks for being named for a doomed harpooner in Melville’s “Moby Dick.”

There was no return match although the Michigan owners asked for one.  Cleveland’s Wescott refused, clearly understanding what the outcome might be.  Both steamers went back to their usual routes, serving on the Great Lakes for decades.  Their racing days over, each ship would have its travails. 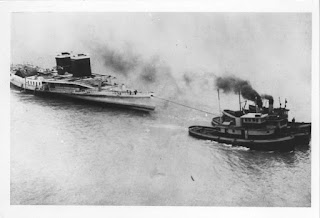 In December 1927, Tashmoo snapped its moorings during a storm and headed up the Detroit River.  Damaged and repaired, it later hit a submerged rock in the St. Marys River as it was leaving Sugar Island, Michigan.  Able to evacuate passengers in Amherstberg, Ontario, it sank in eighteen feet of water and, as shown below, later towed to the scrapyard.  In 1985 Tashmoo was named to the National Maritime Hall of Fame.  A glass paperweight memorializes the vessel. 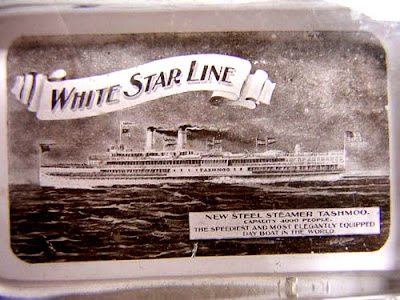 City of Erie also met with ill fortune.  In September 1909, it collided with and sunk a schooner, T. Vance Straubenstein. Three people on the smaller ship drowned.  The steamer was retired from service in 1938 and scrapped in Cleveland in 1941.

Described in the press as “Two Freshwater Greyhounds,” City of Erie and Tashmoo represented the apex of steamship travel — and witnessed its decline. The coming of the automobile opened up new and more flexible travel options for millions of Americans.  The steamers had taken almost five hours at top speed to go 94 miles.  Soon motors cars could make it in two. Never again would a steamship race attract national attention.  As “Ford vs. Ferrari” reminds us, gasoline-powered races soon would prevail.


Posted by Jack Sullivan at 6:29 AM No comments: 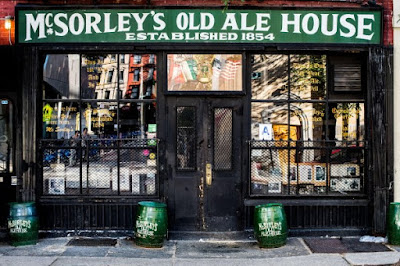 In 1975, during a three month period working in New York City,  I ventured over to McSorley’s Old Ale House for lunch, having read Joseph Mitchell’s well-known book on the saloon.   At the time I was aware of the several paintings of the famous watering hole by New York artist, John French Sloan,  I was unaware then, however,  that a number of Sloan’s artist contemporaries also had memorialized McSorleys. 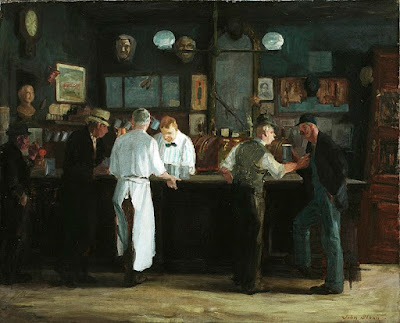 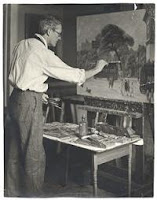 First, a bit about Sloan (1871-1951).  He is best known for his urban genre scenes and ability to capture the essence of neighborhood life in Gotham City.  Sloan, shown here, has been called "the premier artist of the Ashcan School who painted the inexhaustible energy and life of New York City during the first decades of the twentieth century.”  As shown above and in paintings below, McSorley’s not only was his regular drinking establishment but a favorite scene to paint.  Above is Sloan’s “McSorley’s Bar, 1912.” 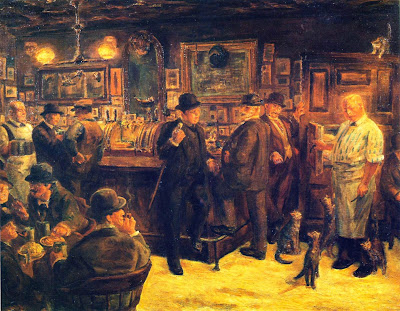 In a painting called “McSorley’s Cats,”  Sloan captured John McSorley, the founder of the saloon at 15 East Seventh Street, in scene with the owner’s rat-catching pet cats.  McSorley had arrived in America in 1851 at the age of 18.  The date on which he started his saloon is in dispute.  McSorley gave it as 1854 but others date it to 1865.  As in the beginning, the establishment still serves only ale and beer with its food, never the hard stuff.  As shown below, Sloan also could capture quiet moments as in “McSorley’s Back Room.” 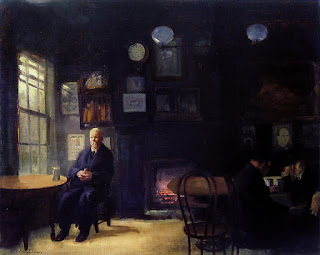 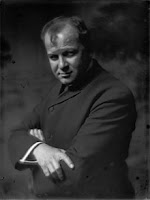 Sloan’s fellow Ashcan School member, George Luks (1867-1933), also painted a scene at McSorley’s.  Known for his depiction of New York City life, Luks's work typifies the real-life scenes painted by the Ashcan School artists.  At McSorleys, as shown below, the artist has captured figures at the bar, one smoking, the other reading a newspaper.  Behind them a bartender is at work. 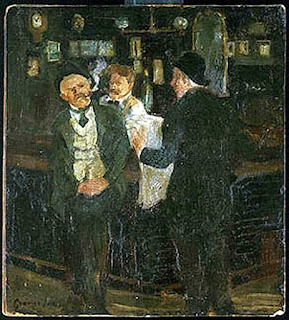 Reginald Marsh (March 14, 1898 – July 3, 1954) was an American painter born in Paris, most notable for his depictions of life in New York City in the 1920s and 1930s. Jobless men are subjects that appear repeatedly throughout his work.  He often worked in pen and ink and in ink wash drawings.  Here he has captured a scene in McSorley’s where a gent likely down on his luck has stopped for a beer and is trying to warm up in New York’s frigid winter by hugging the saloon stove. 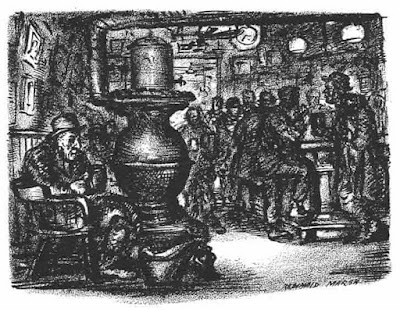 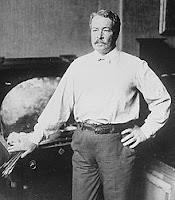 Perhaps the most unusual artist to paint the interior of McSorleys was Childe Hassam.  Frederick Childe Hassam (1859 – 1935) was an American Impressionist painter, noted for his urban and coastal scenes.  After living in France for some years, Hassam and his wife returned to the United States in 1889, taking residence in New York City. Hassam began to paint urban scenes, often using a palette of blacks and browns (considered "forbidden colors" by some Impressionists) to create his paintings.  This is evident in the dark hues Hassam used in his image of a lone drinker at McSorley’s bar. 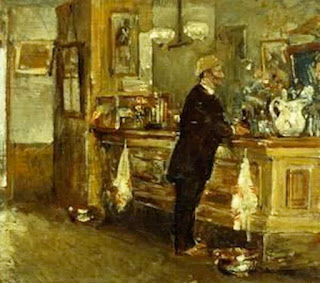 Another artist who chose McSorley’s was Louis George Bouché (1896 – 1969), an American painter with whom I was earlier unfamiliar. Very little has been written about him.  Born in New York City, Bouché spent many years abroad and returned to teach at the Art Student’s League in New York.  A friend of Reginald Marsh, his art is not easily categorize.  Below he has captured the McSorley bar scene somewhat as Sloan had done earlier. 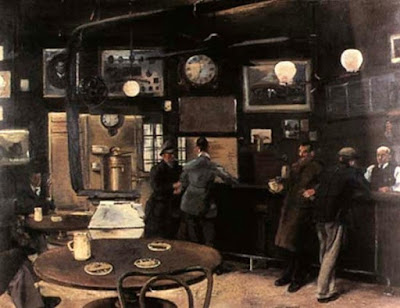 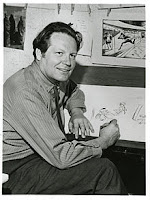 The cartoon of McSorley’s below is by Don Freeman (1908-1978), once a student of John Sloan at the Art Student’s League.  Freeman was known for carrying a sketchbook with him wherever he went. His images depicted New York City, the faces of the people he observed on the streets, and citizens down on their luck.  His pen and ink drawing here depicted some well known McSorley customers.  Note that Freeman included the potbellied stove and the cats. 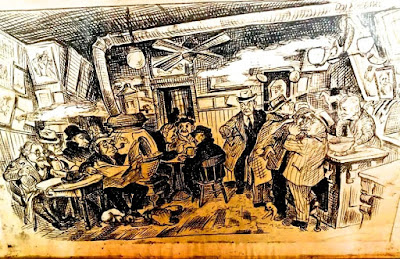 My own memory of lunch at McSorley’s is dim.  I remember having a corned beef sandwich on rye that was mediocre and a glass of ale that was good.  The place seemed a bit dark and dingy, and with my historical interest satisfied, I never went back.  Below is a photo of the saloon interior as it looks today.  The bar, clock, stove, light fixtures — appear as they did in the past.  One major change:  A female bartender.  Women were not allowed in McSorley's until August 10, 1970 and it took a lawsuit to force their admittance. 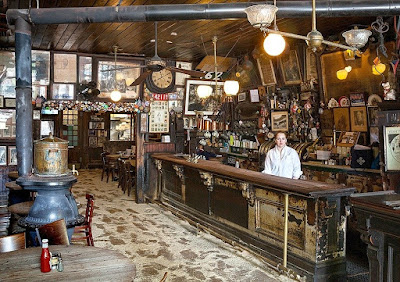