“Steamboat’s A-Comin’ “ -- Out of the Past and Under Glass 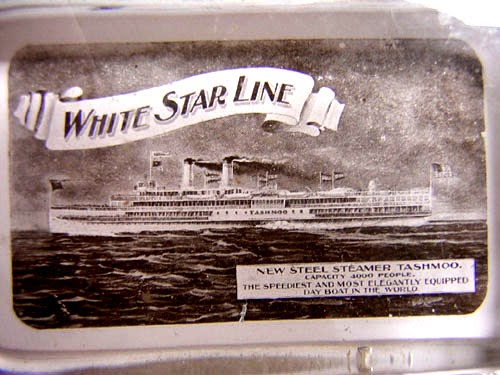 The era of the steamboat is largely a closed chapter in American transportation history,  brought to mind only by the few sternwheelers that ply our larger rivers, most of them carrying sightseers.  Fortunately many of those earlier steamers were captured in glass paperweights that continue to bring their memories to mind, for most have interesting stories to tell. Displayed here are a dozen of these vintage artifacts to carry us back to a time when travel in America was more leisurely.

Launched in 1899, the Tashmoo was the flagship of the White Star Line.  This side-wheeler steamboat was built by the Detroit Shipbuilding Company to ply the Great Lake.  Its regular route was from Detroit to Port Huron, Michigan.  Believed by some to be the fastest ship on the lakes -- it could make 20 knots (23 mph), it was a competitor in a famous race from Cleveland, Ohio, to Erie, Pennsylvania.   The president of the White Star Line, offered $1,000 to any ship that could beat the Tashmoo in a race. The president of the Cleveland Buffalo Transit Company accepted the challenge on behalf of his ship, the City of Erie. The course was 82 nautical miles (94 miles) long.  After encountering several mishaps along the way the Tashmoo lost the race by 45 second but afterward was accounted the faster ship.

Mishaps seemed to plague the Tashmoo, named after a whale hunting Indian in Herman Melville’s famous novel, Moby Dick.  On December 8, 1927, the ship snapped its moorings during a storm and headed up the Detroit River, threatening a major bridge.  Followed by two tugboats, the Tashmoo was stopped only yards from smashing into the span.  Repaired and back in service, the ship subsequently struck a submerged rock as it was leaving Sugar Island,  Michigan.  It was able to dock in Amherstberg, Ontario, and the passengers evacuated before it sank in 18 feet of water.  Eventually scrapped, the Tashmoo was entered into the National Maritime Hall of Fame in 1985. 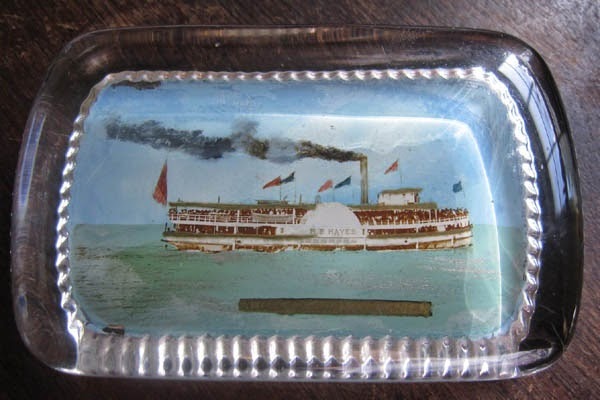 The steamer, R. B. Hayes, shown above, also met disaster on the sea.  It was built to ply the Great Lakes as a large excursion boat and for a time was a principal source of transportation to and from the Lake Erie recreational center at Cedar Point, Ohio.  The Hayes was on the north side of Lake Ontario, however, when it collided with the J. N. Carter, a schooner laden with grain.  The Carter was struck on her starboard side, carrying away its bowsprit and jiboom and smashing the bow. Named after U.S. President Rutherford B. Hayes, the steamer was held responsible for the accident when its crew failed to heed warnings from a tug towing the schooner. 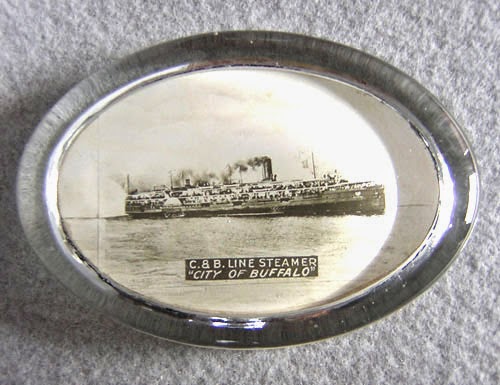 The City of Buffalo was launched in 1895 and at that time was the largest passenger ship on the Great Lakes at 308 feet long,  capable of carrying 3,000 passengers and 800 tons of cargo.   The steamer boasted a grand salon, public and private dining rooms, and 160 staterooms.  Its route generally was between Buffalo, Cleveland, Detroit, Chicago and Duluth.  The trip between Buffalo and Cleveland took about nine hours and cost $2.50. The onset of the Great Depression severely curtailed passenger traffic on the Lakes and, as a result, the City of Buffalo was often idle.  The ship met its demise in March 1838 when it burned at its winter moorings in Cleveland as it was being prepared for the summer season. 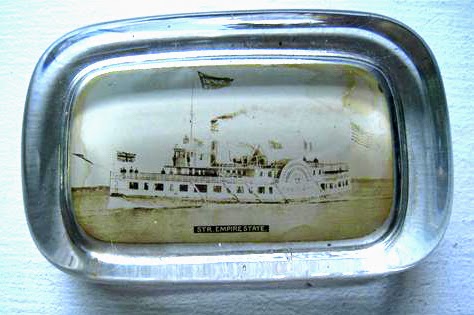 The steam paddle ship, Empire State, shown right, was built a New York City shipyard in 1863.  Formerly known as the Sylvan Stream and renamed in 1893, the ship for many years provided passenger service on Lake Ontario.  Home ported in Cape Vincent, New York,  it burned at the dock in Kingston, Ontario, and was a total loss.  Although her owners received a settlement equivalent to $500,000 today and initially hoped to rebuild it,  they quickly abandoned the effort, stripped the Empire State of its equipment and scrapped the hull. 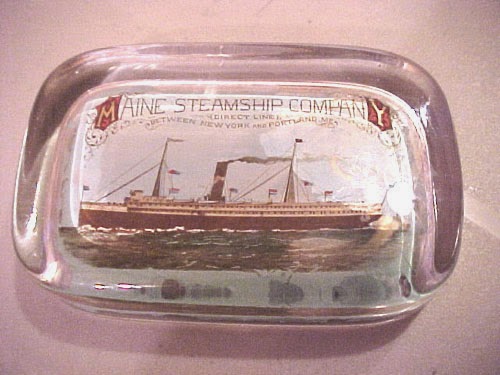 Fire was a frequent problem for steamboats.  The steamer Manhattan, shown above, was a large and comfortable ship, plying the Atlantic to take customers directly from New York City to Portland, Maine for the Maine Streamship Company.   It had made the trip successfully for years when on March 7, 1916, upon arriving in Portland early in the morning and discharging its passengers, it caught fire from unknown causes and was destroyed at the dock.  The destruction was assessed as complete and the loss at $6.25 million calculated in today’s dollars. 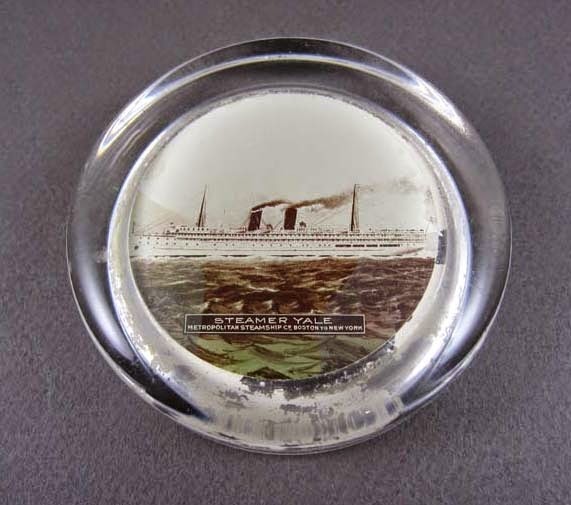 Another oceangoing steam boat of note was the Yale.  Built in 1907 to operate between New York and Boston,  it served that route well for a few years before being drafted into World War One as an English Channel troopship.  Later the Yale was taken to the West Coast to serve a San Francisco-Los Angeles run.  In 1937 the steamer was retired and sold for use as a power and light plant in Kodiak Bay, Alaska.  With the advent of World War Two, the Yale was refitted and called back into military service.  Making almost 24 knots,  the ship had significant speed to be able to sail out of Alaska without a convoy cover,  joining the war effort, according to a press account, “alone and unafraid.” 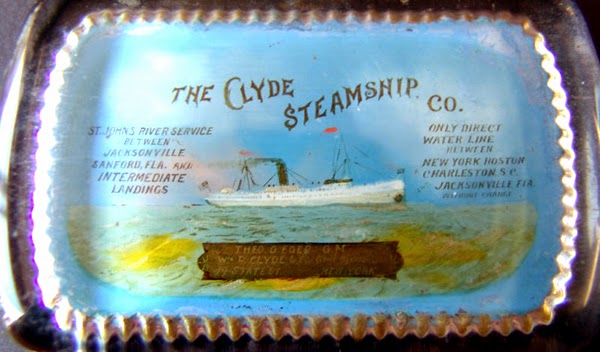 The Clyde Steamship Company, owned by William P. Clyde, featured three lines.  One operating from New York City carried passengers down the Atlantic Coast to Wilmington, North Carolina; Georgetown and Charleston, South Carolina; and Jacksonville with continuing service to the Turks & Cacos Islands, Haiti and the Dominican Republic.  A Philadelphia-based service stopped at similar ports but added Norfolk, Virginia, and climbed the York River to Richmond, Virginia.;  the Potomac to Alexandria, and the Hudson to West Point.  The third line ran out of Jacksonville to various ports in Florida,  including intermediate points on the St. John’s River. 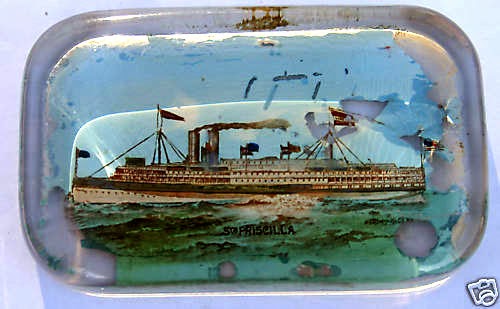 When the Fall River Line launched the S.S. Priscilla  in 1894, it was at the time the largest side-wheeler afloat, capable of accommodating 1,500 passengers.  Shown above, it was famous for the extremely ornate and luxurious interior of the ship.  During its lifetime, the Priscilla was traveled by several U.S. presidents including Grant, Harrison, Cleveland and both Roosevelts, as well as dignitaries such as the Vanderbilts, Astors, Belmonts and Rockefellers. One Boston editor declared, "If you went on a trip to New York and didn't travel the Fall River Line, you simply didn't go at all.”  The Priscilla served for 44-years, the longest in the history of the company.  Her last voyage left Fall River, Massachusetts, on July 12, 1937.  A strike the next day shut down the Fall River Line forever after a 90 year history. 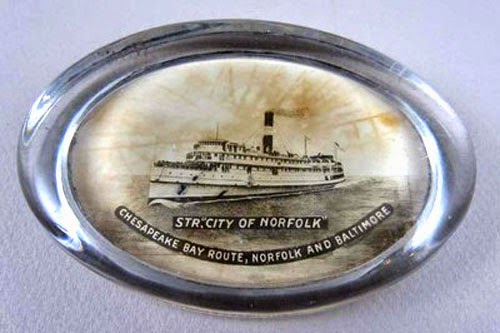 Another steamer serving mid-Atlantic states was the City of Norfolk.  It followed a Chesapeake Bay route, linking the Virginia port city with Baltimore.  This ship was launched in 1911 and measured 297 feet.   It plied the bay as part of the Baltimore Steam Packet Line until its owners joined a large merger of steamship companies and the City of Norfolk became part of the Old Bay Line.  The City of Norfolk was one of the last two vessels operated by Old Bay before it went out of business in 1962.  For four years the ship was idled at Norfolk until 1966 when it was towed to Fieldsboro, New Jersey, on the Delaware River and scrapped. 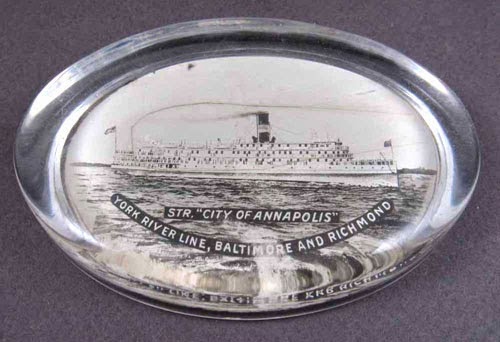 The City of Annapolis also was a Chesapeake Bay steamer.  Part of the York River Line, it served customers along the west side of the Bay,  from Baltimore, with stops along the way, including up the Severn River to Annapolis, and then up the York River to Richmond, the city at the “fall line” beyond which the stream becomes impassible.

While some steamer plied the oceans and others the Great Lakes and the Chesapeake Bay others were built to navigate the rivers of America.  While the most famous plied the Mississippi, others served on smaller rivers.  The People’s Line Steamer -- that was its name, was built in 1907 by several East Coast contractors: the hull by the New York Shipbuilding Company at its Camden, New Jersey, yard; the steam engines at a Hoboken company, and the interior fittings and the superstructure by a firm on Greenpoint, Long Island.  When completed the People’s Line ship, shown below, steamed up and down the Hudson River carrying passengers in luxury between New York City and Albany. 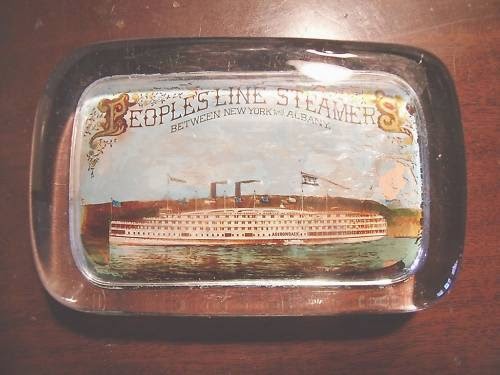 These steamboat “back stories” are brought to mind in these paperweights showing the ships in their heyday, still preserved there though almost all of them long since have burned or sunk or been sold for scrap.  As a result their images under the glass will have to suffice to reminds us of the joys -- and some pitfalls -- of travel by steamboat.

Posted by Jack Sullivan at 12:14 PM No comments: