Bock Beer: Getting Our Goat One More Time 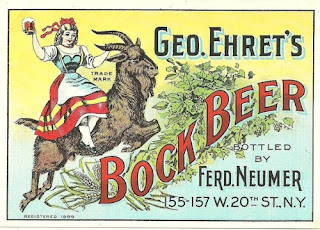 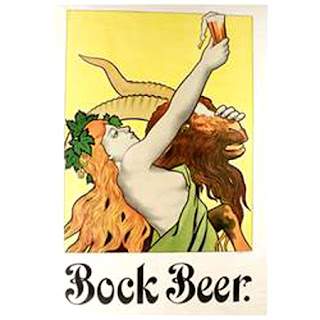 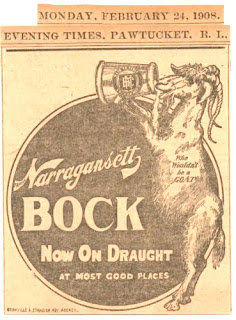 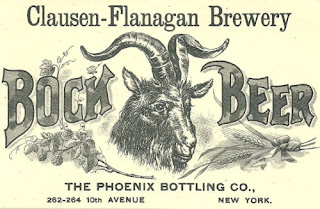 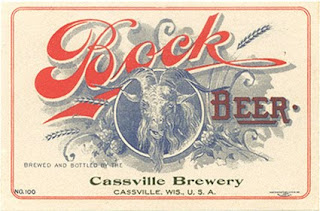 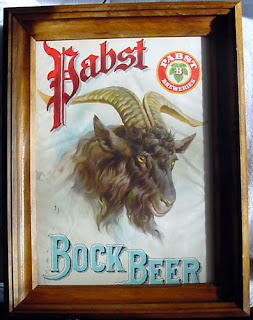 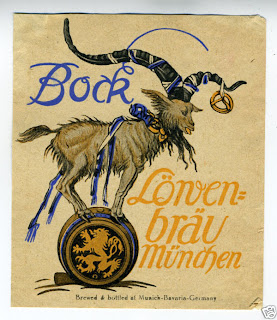 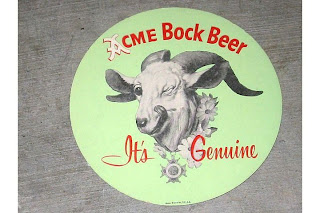 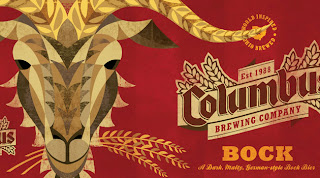 My post last year about this time celebrated bock beer. The origins of bock beer are quite fuzzy. Apparently back in medieval days German monasteries would brew a strong beer for sustenance during their Lenten fasts. A prevailing myth during my boyhood was that bock was a bottom fermenting lager that was created when breweries cleaned out their vats during a Spring cleaning. That apparently was a myth. Whatever its origins, bock beer has traditionally been advertised with goats, as noted last year.

The earlier post featured pre-prohibition images of the goat. This one begins in that era and then shows the goat images as they have evolved to our own day. The first image shows a German beer maid riding a goat. The Hell Gate Brewery was established by George Ehret, a German immigrant, in 1866. By 1900 he had increased production to 601,000 barrels a year and his became a major East Coast Brewery. When Ehret died in 1927 his estate was estimated at $40 million.

Because the goat was also identified with sexuality, bock ads frequently show Billy cavorting with a female, usually fully clothed but sometime, as shown here, in a state of undress. In this case the goat seems more surprised and alarmed by being grasped by the auburn-headed beauty.

A happier goat is the focus of a 1908 Narragansett Bock ad as it appeared in the Pawtucket R.I. Evening Times. The legend written on his side says, “Who wouldn’t be a goat?,” especially with a beer stein in hand. This brewery was founded in 1888 and at one time, the grounds of the Narragansett Brewing Company reportedly included a barn, a stable, a blacksmith, seventy-five horses, forty-five wagons, gas-powered trucks, electric trucks, twenty-five refrigerated train cars and its own ice plant. No mention of a goat pen.

The next ad for bock beer shows a goat with a slightly crazed look in its eyes. It appears to be chewing a plant, presumably hops, but given the goat’s demeanor, it might be hashish.
The Cassville Brewery goat, by contrast, has a distinctly hung over look. Furnace Branch Creek Hollow in Wisconsin, so named because of the lead smelting operation it once contained, was the site of the Cassville Brewery. For many years Cassville boasted of its fine bottled beer and produced numerous cases for sale throughout the area. Today it's the labels and bottles that are hunted for and prized by collectors. The brewery ceased operation in 1938 and the buildings were later demolished.

One of my favorite bock goats was the product of the the Pabst Brewing Company of Milwaukee. The logo above the goat indicates that this is a pre-Prohibition framed sign. It would have been provided by the brewery, probably on a seasonal basis, for the walls of saloons featuring its beer,

Moving beyond the Prohibition era, the next goat image is from Germany where such animals regularly were decorated for Spring festivals. This one comes rolling in on a barrel from Lowen-Brau Brewery of Munich. The goat looks less than happy about its situation. A happier goat is the lip-licking goat. Unlike most of the herd, this one is just a kid amidst “the old goats.” The Acme Brewery of San Francisco was erected after the earthquake of 1906, as a branch of Leopold Schmidt's Olympia Brewing Co. The aftermath of the quake left the city with few operating breweries, and as a result a $1,000,000 order was placed with Schmidt's Bellingham Bay Brewery (and probably a like order with Olympia) for beer to be shipped to the city. Acme went out of business in 1954.

Another modern version of the traditional goat is from on the Columbus Brewing Company, one of the first brew pubs in Ohio. Founded in 1988, it is located adjacent to German Village in the historic Brewery District. Its goat has gone cubist and “tres moderne.”

There they are: Ten more bock goats, dating from the early 1900s to the late 1980s. These are just a few of the thousands of different depiction's of the beer-drinking ungulates that have been featured worldwide for centuries.
Posted by Jack Sullivan at 10:08 AM 2 comments: 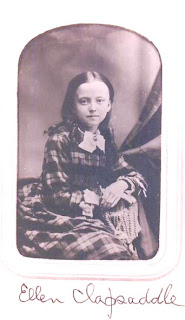 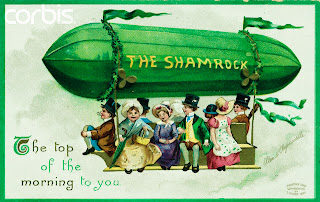 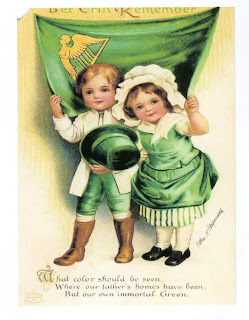 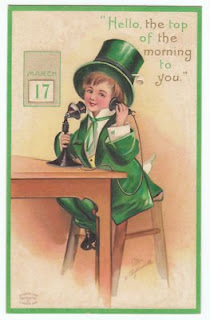 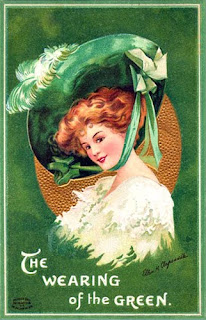 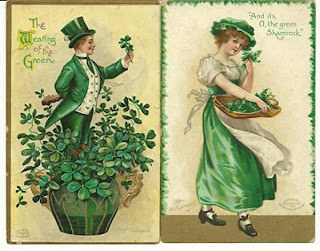 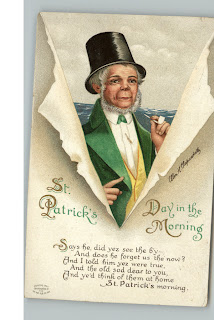 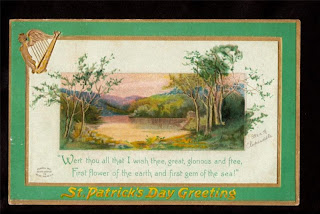 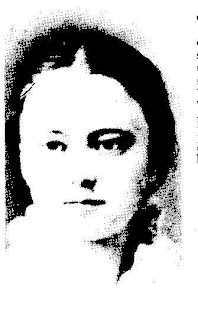 In commemorating St. Patrick’s Day for the past two years, this blog has been devoted to 19th Century racist images of the Irish (March 2010) and to the gradual changes in their depiction that occurred from the 19th into the 20th Century (March 2011). This year the focus is on one woman, not Irish, who did more than anyone to provide a dignified and salutary image to Americans of the Irish heritage. She also can be credited with popularizing the St. Patrick's Day greeting card. Her name was an unusual one: Ellen Hattie Clapsaddle.

Clapsaddle was born as the Civil War was ending in 1865 in the small farming community of South Columbia, Herkimer County, New York, the child of Dennis and Harriet Clapsaddle. She shown here in her graduation picture from the Richfield Academy in Richfield Springs, New York. The little girl who looks out at us is shy and fragile. Her juvenile signature bears little resemblance to the “Ellen Clapsaddle” that she added to her art work. She subsequently went to college at the Cooper-Union in New York City and was one of its first women graduates.

Ellen was drawn to art from an early age. Until she was in her early 20’s she painted local farmhouses, homes and portraits in watercolor. She also decorated china plates and did worked for a Utica publishing company. During this time she sent two of her postcard designs to a New York City publisher who immediately liked her artwork and contracted with her for more. Her cards became an instant success.

During her lifetime Ellen Clapsaddle created more than 4,000 images of children and published some three million postcards and greetings containing children. She is credited with putting the first smile and rosy red cheeks on Kris Kringle and beginning his transition to modern day Santa Claus. Just as important for the purposes of this post, she pioneered in the creation of the St. Patrick’s Day card. In so doing, she was making giant strides in improving the image of the Irish in America.

In the past Irish-American children frequently had been portrayed as ill-clothed, dirty and ruffians. Clapsaddle, as shown here, dressed them as little gentlemen and ladies with top hats and bonnets. A particular favorite image of mine are the Irish children floating along on a large green balloon and the salutation, “Top of the morning to you.” She repeated the little gentleman and lady themes on a number of St. Patrick’s Day postcards. Occasionally, and brilliantly, she sometimes strayed from romantic views to give us the portraits of four Irish kids just being kids -- still an endearing picture. Ellen never married and, sadly, had no children of her own.

Clapsaddle also had the ability to paint beautiful women and make them Irish, as shown in the next two postcards. Earlier artists and cartoonists often had pictured mature Irish women as overweight hags or slatterns. Her depiction's help to change all that, as did the increasing economic well-being of the American-Irish population. Her depiction of the older Irish men also was respectful, too often depicted earlier as bomb-throwing thugs. The gentleman shown here with pipe and hat is well groomed, gentlemanly and obviously benign.

The final postcard included here demonstrates Clapsaddle’s continuing ability to paint landscapes, in this case of Ireland. I can find no reference to indicate that she ever visited the Auld Sod, even though she made frequent trips to Europe. The Germans had perfected a four-color printing process that was far ahead of that in the U.S. and she traveled there frequently to supervise the printing of her cards.

Her last trip to Europe proved her undoing. She was in Germany working with an engraving company when World War One broke out and she was unable to return to the United States. The strain of being held in wartime Germany told on both her physical and mental health. After the war she was found wandering the streets of a German town, with no money, hungry and confused.

Brought back to the United States through the generosity of a former employer, she was admitted to the Peabody Home for the elderly and destitute in New York City where she died in 1932, one day short of her 69th birthday. She is buried next to her parents in Lawnview Cemetery. Her grave marker simply reads, “ELLEN.”

The last, and only second known, picture of her is shown here. Compare it to the graduation photo. The eyes that look at us now are injured and sad. For a woman who has given so much joy and pleasure to millions through her artistry, there was only bleakness and despair. Ellen Clappsaddle did not deserve her fate.

Certainly the products of her talented hand have fared better than she did; her cards are avidly collected and preserved by thousands of adherents. Those of us who boast of Irish descent should raise a glass on March 17th to the memory of a woman named Clapsaddle who as much as anyone changed the image of the Irish in America while helping making St. Patrick’s Day a national celebration.
Posted by Jack Sullivan at 6:44 AM 2 comments: