Artifacts from a Traveling Life

The much of my working life involved traveling abroad — by actual account 80 trips overseas and work in 65 countries in every part of the globe.   At least for my early travels, I was keen on bringing back artifacts that reflected something of the culture and art of the countries.  As the house filled up, however, the collecting desire diminished.   Here is a selection from my holdings, several featured because of a story behind their acquisition. 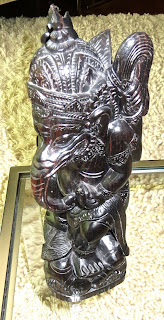 Memorable as my first piece, the Indonesian statue of the elephant god, Ganesha, is an outstanding piece of Balinese wood sculpture.  Meticulous carved completely by hand on a dark hardwood, it reflects a craftsmanship virtually lost during ensuing years.  In 1969 I had wandered down the beach from my Denpasar hotel when approached by a young man in ragged clothing.  He offered me this marvelous statue in exchange for my shirt — a shock.   Because I had packed lightly for the side trip to Bali and had no spare, I gave him as much money as I had in my pocket. 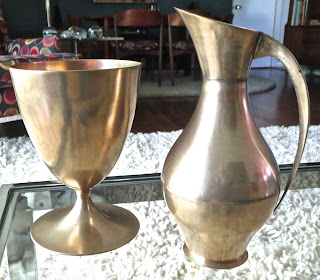 In 1970, now employed by the House Committee on Foreign Affairs, I made a solo study mission to Asia to review U.S. military training programs.  While in South Korea I was attracted to this pitcher and chalice.  To me their graceful lines bespoke the artistic genius of the people.  Told that the pair had been handcrafted from copper shell casings left from the Korean War, the Biblical prophet Isaiah’s dictum about “beating swords into plowshares” came to mind and I bought them. 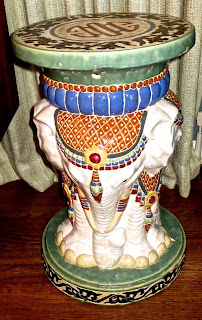 During the Indochina War, I made three trips to the countries embroiled in the conflict.  A souvenir sought by many, military and civilian, who came to Vietnam was a large ceramic pachyderm known to the illuminati as a “buf-e” — “big ugly f…… elephant.”  I resisted their attractions until 1974 when a Saigon “buf-e flogger” (merchant) displayed a new design fashioned after the three headed elephant symbol of Laos.  I bought two that since have graced our dining room. 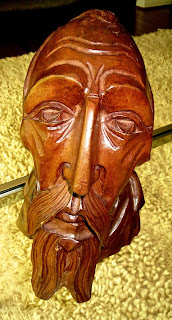 In 1974 as a way of assessing how well the Agency for International Development (USAID) was implementing important changes the Congress had made in assistance policies, I was part of a investigative team that visited Central and South America.  At that time concentrating on wood carvings, a head of Don Quixote, well conceived and executed, caught my eye in a shop in Colombia.  It too has a permanent place in our dining room.

The next artifact, a Cambodian silver box, carries a tragic story with it.  In 1975 just a matter of days before the Communist Khmer Rouge stormed into the capitol of Phnom Penh,  Sisowath Sirik Matak, a royal prince and assistant prime minister, gave it to me when solo I went to meet with him about the crisis.  He was realistically pessimistic about the future but refused to leave Cambodia ahead of the enemy, writing the U.S. Ambassador:  “But mark it well that, if I shall die here on the spot and in my country that I love, it is too bad because we are all born and must die one day. I have only committed the mistake of believing in you, the Americans.”  Just days later he was shot with other officials in front of the National Postal Building.  I never look at the box without thinking of his bravery. 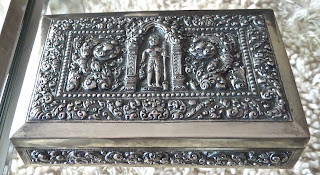 That example might be contrasted with the fate of Nguyen Van Thieu, the last president of South Vietnam.  I was attached to a 1975 delegation of House and Senate members asked by the White House to go to Indochina in an attempt to spark an emergency appropriation for the war effort.  While in Saigon the delegation met with Thieu in the Presidential Palace where he presented each of us with the lacquered, inlaid vase shown here.  When new funding failed and Communist forces were at the gates of Saigon, Thieu was whisked away to Taiwan by the CIA and later moved to Massachusetts.  He died of natural causes in Boston in 2001. 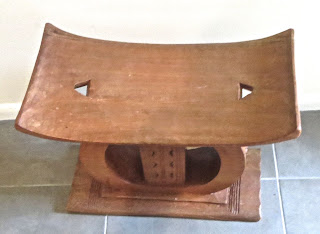 Later in 1975 I led a Congressional staff mission to Africa reviewing USAID and Peace Corp programs.  One high point was our visit to Ghana where we met with the U.S. Ambassador, Shirley Temple, the former child film star and a charming, bright personality.  She was very forthright with us on problems of the Peace Corp in Ghana.  While in Accra my eye caught an “Ashante stool,” a seat carved from a single piece of wood upon which Ghanian gentry are said to sit.  For the past 43 years this stool has graced our foyer where it has proved handy for pulling on boots or, more commonly, depositing the days’ mail. 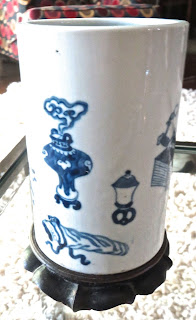 The final artifact is a blue and white pen holder from China.  I bought it in Beijing as  part of the first delegation of House and Senate staff members invited to the People’s Republic.  We arrived just in time to be part of the deadliest earthquake of the 20th Century at Tangshan on July 26, 1976, one that killed anywhere from 240,000 to half a million Chinese.  As a result of damage in Beijing 100 miles away, our itinerary was drastically altered and we saw parts of China no American officials had yet visited.  As I look at the pen holder the memories return of that tremendous shaking.

Eight items, eight memories of travels taken.  Each piece has earned a place in our home where they make a presence and bring the past into the present.

Note:  I have provided a more complete description of the Great Tangshan Earthquake and its effects recorded on this blog, March 24, 2017.


Posted by Jack Sullivan at 4:26 AM No comments:

Not long ago I brought up the subject of the Hoosier Hot Shots to a group of six friends, all of them 70 plus years old.  None of them could recall the singing group of Indiana natives that captured huge audiences of listeners to their radio programs beginning in the mid-1930s and extending into the 1970s.  That is a shame, given the impact the quartet had on millions of Americans, especially during difficult times. 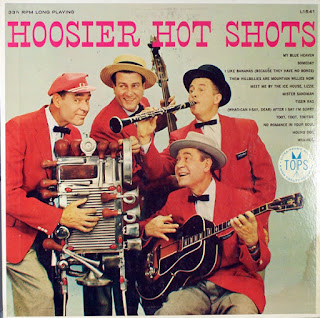 Shown above, the Hoosier Hot Shots, while able to play multiple instruments, generally stayed with clarinet (Gabe Ward), string base (originally Frank Kettering), guitar (Ken Trietsch) and slide whistle (Ken’s brother, Paul, known as “Hezzie).  Hezzie also played a homemade instrument made from a washboard with various noisemakers attached.  All of them accomplished musicians, the Hot Shots’ repertoire focussed on swing and jazz standards as well as their own compositions of a comic variety.

Those humorous songs always have been among my Hot Shots favorites.  Among them is “I Like Bananas, Because They Have No Bones.”  It begins with  customer complaining that a fruit vendor has not been displaying his favorite fruit.
The lyrics continue: 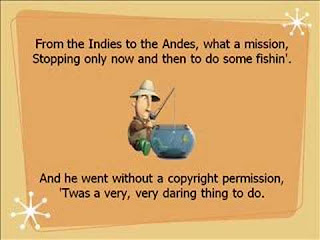 Another “nonsense” song written by the Hot Shots that has had some interest down the years — even to be included in a Boy Scout handbook for singing around the campfire — is “To the Indies to the Andes in his Undies.”  Here are some sample stanzas.

Curious about the name “Otto Zilch,” I did some research on the last name and found that “zilch,” meaning “a nullity” or “nothing,” likely dates from a 1931 magazine article with which one of the Hot Shots may have been familiar.   Zilch is an actual family name of German-Slavic origins, however, and an “Otto Zilch” lies buried in the Fletcher Cemetery in Starke County, Indiana.  His tombstone is shown here.   The Hot Shots could not have had him in mind since this Otto died in infancy in 1901. 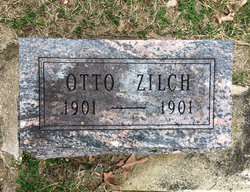 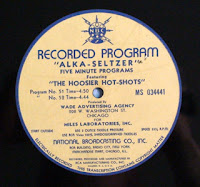 During their career the Hoosier Hot Shots recorded hundreds of records and appeared in more than twenty motion pictures with stars like Gene Autry, Dale Evans and the Three Stooges.  During the mid to late 1940s they did series of musical “shorts” for Columbia Pictures.  Late in that same decade (1949-1950), the Hot Shots had their own half hour program on the Mutual Broadcasting System.  Since my family as yet did not have a TV, I hunkered down eagerly by the radio every Saturday waiting for Ken to intone:  “Are you ready, Hezzie?”  Then the boys would tear off into their opening number, such as  “When There are Tears in the Eyes of the Potato.” 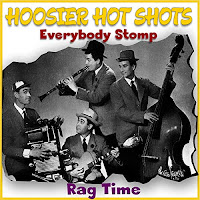 Today the Hoosier Hot Shots music may sound dated or even “corny” to some but the secret of their four-plus decade run, I believe, is rooted in the their times.  They began performing during the hardest economic era in the Nation’s history when millions of American were out of work and hurting.  The Great Depression was not just financial but psychological.  With their upbeat, free swinging musicality, spontaneous arrangements, and frequent close harmony they helped lightened the burdens of everyday life.  It was hard to think of the Hoosier Hot Shots without smiling. 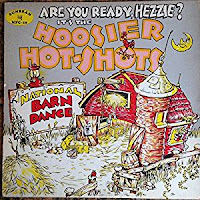 World War II brought its own tensions and sorrows.  Now at the peak of their popularity the Hot Shots toured with the USO to entertain the troops in North Africa and Italy.   Newsreels spots of their performances often were part of the weekly trek to the cinema palace.  Their records regularly made the Billboard country charts and they were regulars on the National Barn Dance from WLS-AM in Chicago, broadcasts that could be heard nationwide.

But time flies and fame is fleeting.  Unfortunately few are alive today who heard and appreciate the Hoosier Hot Shots.  But if you have an Amazon Echo or a similar device in your home, ask it to play a number by the group.  I did recently and four wonderful songs rolled off before I was forced to other pursuits.  Oh yes, and Hoosier Hotshot CDs are readily available from Amazon and other sites. 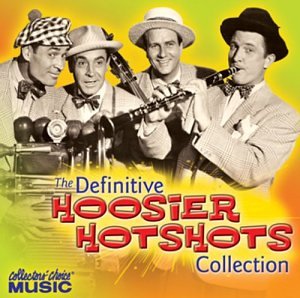 Labels: “Are You Ready Hezzie?, “I Like Bananas, ” Depression era music, ” “From the Indies to the Andes in His Undies, ” Ken and Paul Trietsch, Frank Kettering, Gabe Hawkins, Hoosier Hot Shots
Newer Posts Older Posts Home
Subscribe to: Posts (Atom)