The Iconic World of Frenchie’s Bar 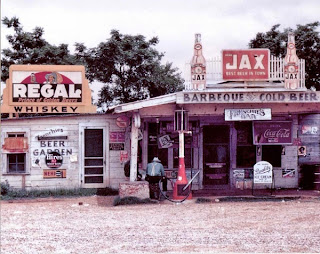 A few months ago I came across the photograph, shown here, of a crossroads store, bar and gas station in a hamlet called Melrose, located in the cotton-growing region of Louisiana,.   The photo, entitled “Frenchie’s Bar.” intrigued me so thoroughly that I bought a refrigerator magnet bearing the image.  It also set me on the path of finding out more about the origin of the photo. In the course of my research I discovered that it  has achieved iconic status.

First the origins:  The image is from a photograph taken under the auspices of the Farm Security Agency (FSA), a federal body that provided salaries for photographers who traveled the United States making an historical document of America during the difficult times of the Great Depression of the

1930s.   Among their number were such famous names as Dorthea Lange and Walker Evans.  Joining their ranks was the lovely and accomplished woman who took the photo of Frenchie’s Bar.  She was Marion Post Wolcott, born in June, 1910, in Montclair, New York.

Beginning in September 1936.  age 26, Wolcott spent three and one half years photographing in New England, Kentucky, North Carolina,  Florida, Mississippi, and Louisiana.  Her camera, as she is shown here holding, was a Speed Graphic,  a heavy, awkward mechanism that required reloading after every shot.  Called “a photographic pioneer on America’s ragged frontier” by a biographer, Wolcott is said to survived illness, bad weather, rattlesnakes,  skepticism about a woman traveling alone, and the sometimes hostile reaction of her subjects.

Through it all Wolcott remained dedicated to her responsibilities:  "As an FSA documentary photographer, I was committed to changing the attitudes of people by familiarizing America with the plight of the underprivileged, especially in rural America....FSA photographs shocked and aroused public opinion to increase support for the New Deal policies and projects, and played an important part in the social revolution of the 30s,”  she once wrote.

Of the thousands of photos she took for the FSA,  I wonder if Wolcott, who received many awards during her lifetime, understood that it would be Frenchie’s Bar, taken about 1934,  that would reach iconic status, a little like Grant Wood’s “American Gothic”  painting of a farmer and his daughter.  After all,  Melrose is just a spot on the map in Natchitoches (pronounced “Nag-o-ditch”) County,
Louisiana, adjacent to the Red River.  The bar was what was known in Southern parlance as a “juke joint, an establishment that featured music, dancing gambling and drinking, primarily operated by African-Americans. Usually found at rural crossroads like Melrose, juke joints catered to the rural black workforce who were barred from white roadhouses by Jim Crow laws.

Tom McLeod is a Southern artist who says on his website that he is devoted to capturing in his paintings the “mystical authentic essence of Southern culture.”   When he paints a scene, this one clearly based on Wolcott’s photo, he says, “I strive to capture the essence of a place, not just the architecture.  That is evident from his version of Frenchie’s Bar.  Gone  is the figure in front of the gas pump.  The entire frontage has been foreshortened and the colors of the signs are more vivid.

All this is in keeping with McLeod’s philosophy that he paints “what is felt, but not seen, the memories of the essence, not the details of the ordinary.”  He also believes that the playfulness of distortions in perspective, very evident in this painting,  emphasizes the “authentic.”   In this painting he seems to have captured something authentic, as did the original by Marian Walcott.

Jim Lappe is a self-taught artist who grew up in the Middle West but moved to the
Roswell/Alpharetta area of New Mexico in 1981.  With his wife and two grown children his day job is selling real estate.  But following a lifelong interest in art,  he found his passion was painting in vibrant acrylics old trucks and automobiles and other relics from the past.

This is evident from Lappe’s rendition of Frenchie's Bar.  Although the original had a gas pump,  there were no vehicles in sight.  The New Mexican artist has added three,  an ancient wrecker, a pickup and a flatbed truck.  Like McLeod,  Lappe has distorted the perspective to some degree but he substantially has changed the atmosphere of the scene.   The original photo conveyed isolation and emptiness.   Lappe’s painting presents Frenchie’s Bar as a place of activity, of vehicles coming and going, of drivers somewhere inside having a Regal Whiskey or  a JAX Beer.

Although our next depiction of Frenchie’s Bar includes a model automobile,  it lacks the same sense of activity that Lappe suggest.   By contrast, this representation seems somewhat sterile.   Unlike McLeod,  the artisan who fashioned this three-dimensional version of the Melrose juke joint has captured the architecture but not the essence. 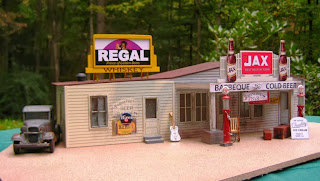 This model  is the product of the Tin Whistle Sign & Kit Company of Arden, North Carolina.  Costing  $89.90,  the kit comes with a laser-cut basswood body,  two billboards, interior flooring, 2 gravity fed gas pumps, assorted resin castings, and assorted graphics.  In addition to the model car,  two accouterments are a rocking chair and a laser-cut dobro guitar,  none of them in the original photo but identified with Southern culture. A hobbyist, I suppose, would set this scene into to his model train set and let the action be supplied by the choo choo coming down the tracks.

If an iconic image has many aspects to it as Frenchie’s Bar does,  even a small portion may be emulated.  Shown here is a paperweight, ostensibly issued by the Coca Cola Company, that shows a 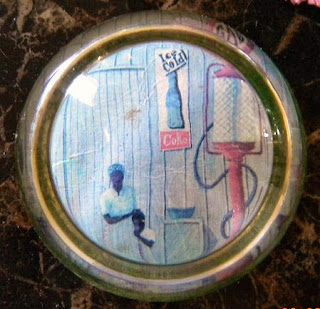 black woman in a kerchief with a small black child, with a gasoline pump in the foreground.   There is a single sign that says “Ice Cold...Coke” and displays a bottle.  The  Wolcott original has a large Coke sign at right but also smaller signs that advertise Nehi and Hires Root Beer.

Clearly those fascinated by the image of Frenchie’s Bar have only touched the surface of what might be done with this iconic  image.  It could be the set for a play or a scene in a motion picture of Southern life.  We have not begun to fathom the character of the man in the straw hat and suspenders who has his back to us, filling a gas can.  Perhaps it is for the figure sitting at left, partially hidden by a pillar.  We also can image this “juke joint” on a Saturday night when the cotton pickers roll in.  Word is that these places got loud and rowdy along about midnight.

Marian Post Wolcott, who died in 1990 after a long bout with lung cancer, might find it fascinating that her photograph, taken almost 80 years ago in a sleepy Louisiana crossroads, would find so much appreciation and imitation (the sincerest form of flattery, remember) in the 21st Century.  She might even have enjoyed seeing the “digitally painted” and elegantly framed version of Frenchie’s Bar available for sale on the Internet, shown below. 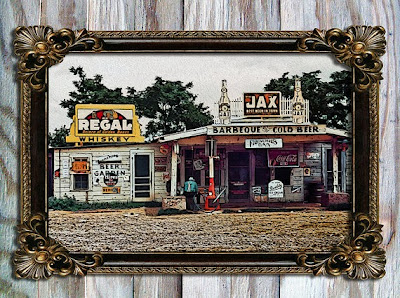 Note:  For those interested in finding out more about Marion Wolcott, a truly extraordinary personage, a more complete biography can be found on the Internet. The original photo is in the public domain and available from the Library of Congress Collection.   Both Tom McLeod and Jim Lappe have websites that feature their artistry. Both are well worth a look.  And for model builders, Tin Whistle Sign & Kit maintains a website with lots of scenes to choose from. 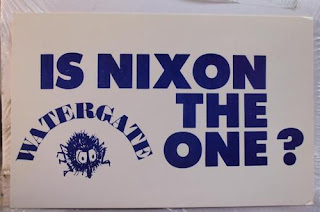 During the summer of 1973, the Watergate scandal broke open as the Senate Judiciary Committee conducted an investigation into the events surrounding the 1972 break-in at the Democratic Party Headquarters in DC’s Watergate Complex of offices and apartments.   Those events and the Watergate itself have given rise to a plethora of souvenir items, many in glass, ceramic and other materials.

The Watergate complex itself was controversial, purportedly built by funds from the Vatican, of a seemingly radical architecture previously unseen in federal Washington.  Even before it became famous for the “bugging” incident, the buildings themselves had become something of a tourist destination.  A gift shop there sold patriotic souvenirs like the pitcher shown here.   Or if the tourists 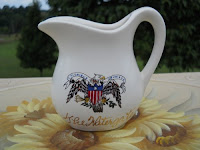 were more unbuttoned,  they could buy a highball glass that advertised “Watergate Kentucky Straight Bourbon Whiskey”  at Watergate Wine & Liquors in the complex.

We don’t know what spirituous beverages the White House was serving the night in June 1962 it authorized the break-in at the Democratic National Committee Headquarters housed in the Watergate Office Building.   What we do know is that the gambit backfired and eventually  brought down a President.  Partisans on the Democratic Party side were quick to fashion souvenirs like the ceramic plate shown here to remind Republicans of the ensuing painful events   The plate was the creative work of Walt Steinsiek, a longtime cartoonist. 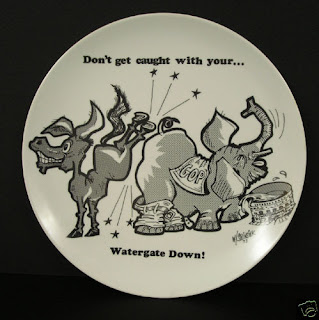 The Senate Judiciary Committee hearings into the Watergate scandal began in May, 1973, and continued through June.  Millions of Americans watched them on television as, one after another,  administration officials trooped to the witness stand to be as, among other things, “What did the

President know and when did he know it?”  This famous event in American history occasioned any number of artifacts.  Among them was a wall plaque that showed the committee seated while President  Richard Nixon, dressed like a king in a crown and cape, walked in front of them.

Another ingenious item, apparently made in the United Kingdom was a chess set in which many of the characters involved in Watergate were depicted as chess pieces.  The White House crowd was shown as the white pieces.  Depicted clockwise from left were  John Erlichmann, Nixon,  Pat Nixon,  Robert Haldeman,  Vice President Agnew, John Mitchell and Howard Hunt.   Shown in close-up is Richard Nixon as the “king” in the retinue and  Sen. Sam Ervin, who headed the Watergate Committee, as the black king. The pieces were made of resin. 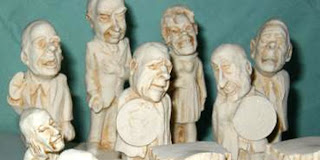 In a more contemporary vein,  on September 27, 2013, at a private gallery in Washington,  an exhibit will open that features oil pastel renderings of figures in the scancal.  Called “When What’s Right is 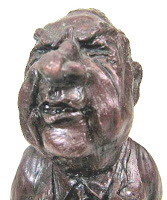 Wrong:  Watergate Portraits and Other Drawings,”  it presents the work of Trudy Myrrh Reagan.  Her relationship to the late President is unclear.

Not everyone, of course, was enchanted with the hearings considering them a “witch hunt” perpetrated by Democrats.  One dissident was driven to produce a scalloped glass paperweight that branded them the “Watergate Circus”  beneath beneath the flags of a circus tent. The chairman was branded as “Ringmaster”  but the perpetrator failed to check the spelling of the North Carolina senator’s name and it came out “Irwen.” 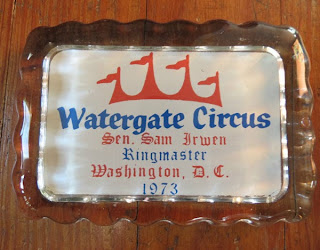 The press at the time noted that the Watergate Committee members themselves had been “swamped by a flood of knick-knacks,  most of which had been given away to constituents or school children and just sent to the wastebasket.  Senator Ervin had kept  gavels;  Howard Baker, a silver pipe; and Daniel Inouye, a fruitcake.   Among the gifts may well have been the Watergate knife that presents Nixon in three poses, seeing, hearing and speaking no evil.

The last souvenir, a ceramic ashtray, probably dates from 1975 or 1976.  By this time, Nixon and Agnew, the winning Republican ticket in 1972,  both had been forced to resign and was no hint that either ever again would be a candidate for national office. Notice that both men apparently have broken their golf clubs, apparently in frustration over their situations. 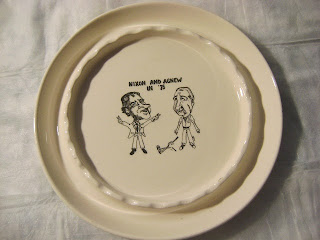 For political “junkies” it would be possible to build a substantial collection of Watergate souvenirs.  Such an assemblage would be a historical reminder of a time when the attempt to bug an office ultimately brought down an American President.  In an era of what seems like ubiquitous bugging of Americans,  that idea seems almost quaint.


Posted by Jack Sullivan at 6:10 AM No comments: