Risque Whiskey II: Clothed and Not So 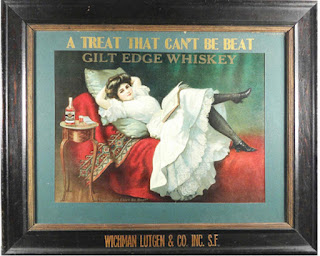 In January 2011,  this bog featured a post dedicated to the various risque advertising and merchandising artifacts that the distilleries, rectifiers (blenders), wholesalers, liquor stores and saloon of the pre-Prohibition era issued to promote themselves and their brands.  In ensuing months I have collected a number of other images from that period that reflect the same “sex sells” attitude.

One thing always to keep in mind about America before 1920 is that women were not allowed in saloons.   That enabled publicans to feature over 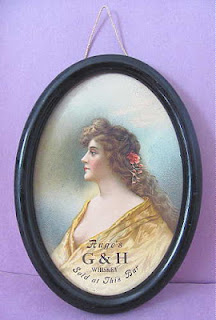 their bars and at other points within their drinking establishments,  pictures of unclothed or otherwise suggestive images of females, knowing there would be no outrage among their patrons.  For those selling whiskey, therefore, providing a steamy sign that advertised their liquor was a natural.

Five such are shown here.  The first, for Gilt Edge Whiskey, was the flagship brand of Wichman, Lutgen of San Francisco.  The lady, legs akimbo, lies on a red coverlet with a bottle of whiskey next to her.  She seems to be waiting for someone.  Either she or the whiskey is declared “A Treat that Can’t be Beat.”  Perhaps “Guilt Edge” might have been a better name for the booze.  Wichman, Lutgen, founded in 1877,  saw their building destroyed in the great San Francisco earthquake of 1906 and rebuilt, but could not survive Prohibition. 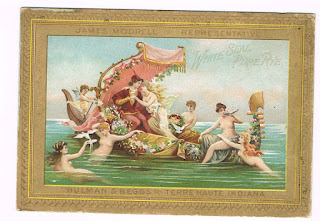 or shawl of some type with a bit, just a tantalizing bit of a breast showing. It was issued specifically for bars by Auge’s for its G and H brand whiskey. So far my research has not been able to uncover either the brand or the outfit that issued it.

The sign advertising White Seal Whiskey points up another frequent scheme for showing female nudity:   Place the ladies in a mythical or Oriental scene.  Here a pair of young lovers -- she bare breasted -- are being escorted down 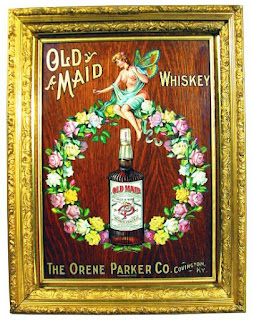 their river of love on a flower garlanded boat by no fewer than five totally nude river nereids.  This was a very popular bar sign from the Hulman and Beggs Company of Terre Haute, Indiana.  Herman Hulman, progenitor of the famous Hulman motor racing family,  was in the liquor business for many years but his alliance with John Beggs apparently lasted only from 1894 to 1896.

The fairy atop the Old Maid Whiskey sign clearly has a kinship with Hulman’s sea nymphs  and even more generously proportioned and clearly delineated.  When Orene Parker, a Covington KY rectifier,  took Old Maid as his flagship brand, he initially advertised and labeled the whiskey with a sour faced old maid.   The owner of a vaudeville theater and showman,  it apparently did not take Orene long to decide that a more appealing image might sell better. 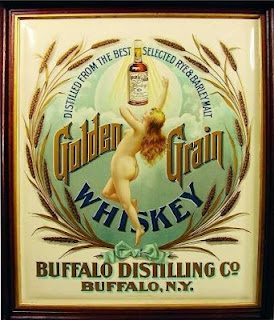 Gustav Fleischmann,  part of the well-known Fleischmann yeast and distilling family,  did not take long to decide that a saucy sign might help sell his principal label,  Gold Grain Whiskey.  Gustav, an immigrant from Germany, apparently liked his ladies with amplitude.  Thus the woman on his saloon sign has a particularly robust backside.   Partners in a Buffalo wholesale liquor firm from about 1882, Fleischmann bought out his partner about 1893 and changed its name to the Buffalo Distilling Company.  It survived until 1918.

Another format for risque images were paper items like calendars and trade cards.  These would be given out to customers of all stripes to remind them of the proprietor and his wares.  The first here shows a quintet of comely maidens each dressed from head to toe and hardly scandalous in appearance except for the five cats 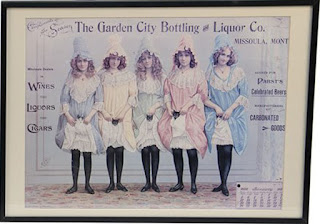 peeking from their bloomers.  With a calendar attached, this image could be referred to on a daily basis for a year.

The trade cards that follow are from a single whiskey man whose name was Simon Hirsch.
A German immigrant who settled first in Leadville, Colorado, serving whiskey to silver miners, Hirsch moved on to Kansas City where he founded a very successful whiskey business. There his flagship brand was Quaker Maid rye.  Initially his label and advertising showed a modestly clad damsel.  But the racy images of 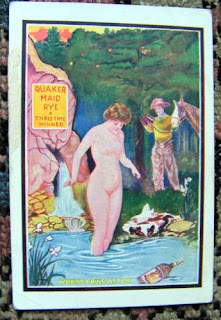 the boomtown obviously prevailed and his ads featured women in various stages of nudity, but,  just as interesting, a male presence to ogle them.  Hirsch founded his business in 1877 and continued selling whiskey until 1918 when he switched to selling an alcohol-laced patent medicine.

Still a third format for using risque images in merchandising liquor was the use of the tip tray.   These were liberally provided to saloons and restaurants for use on the bar or by servers to present a bill, hold the payment, bring the change, and, presumably, find their tip.   The Edwin Schiele Distilling Co. put a bare breasted goddess on their tray advertising Autocrat Whiskey, their flagship label.  She seems to be emerging from a shimmer of silk or maybe soapsuds, but clearly thirsty for a shot of the good stuff.  The company was founded by Edwin Schiele about 1900 and lasted until Missouri went dry in 1918. 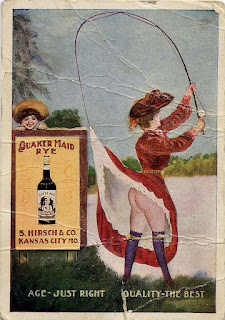 Thomas Moore, who billed his whiskey as coming from Possum Hollow, Pennsylvania, similarly found an outdoor setting for his tip tray nude,  reminiscent of the Manet painting “Luncheon on the Grass,”  but a whiskey bottle where a wine bottle would be.  Moore, who was forced by poverty to suspend his schooling at 14,  became very rich working in both the distilling and mining industries.   He died in 1898 but his firm continued until Prohibition. 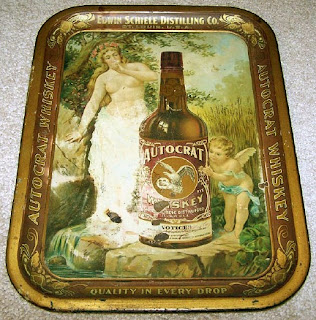 Our final example is, to my mind the most sensuous of the lot.  It appears on a tip tray issued by the I. (for Isadore) Trager Company of Cincinnati, whose principal brand was “Cream of Kentucky.”  The image is of a red haired, bare-breasted woman with a come-hither look in her eyes.  The tray identifies her as the “Cream of Kentucky”  but clearly not the kind of girl one takes home to Mother.  Trager founded his firm in 1886 and met with financial success until Ohio voted “dry” in 1916. 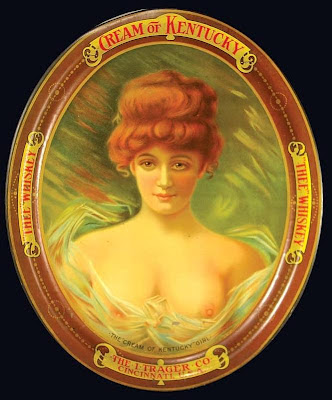 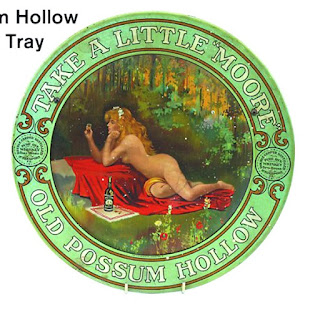