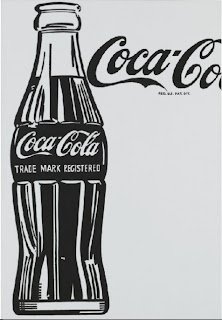 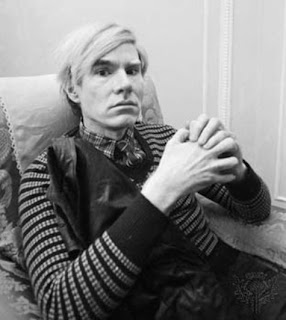 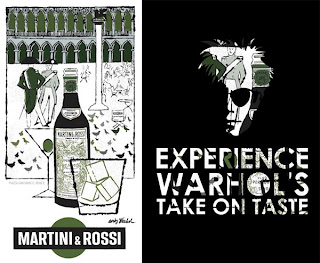 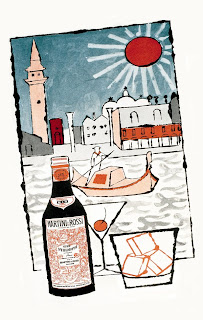 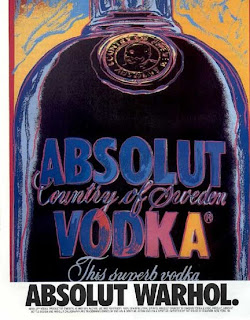 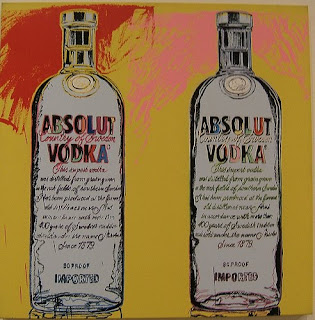 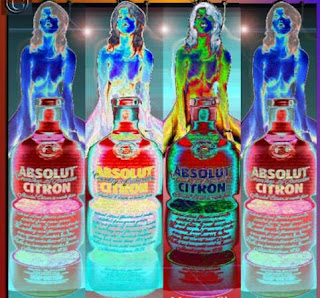 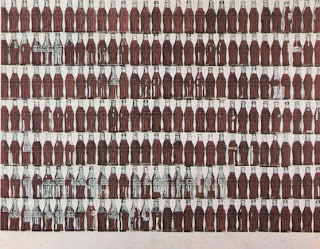 If a painting of one Coke bottle is worth $35,360,000, then by inference could a painting of 210 Coke bottles by the same artist be worth $7.4 billion? Shown here is a single Coke by “Pop” artist Andy Warhol that recently sold at auction for that eight figure sum. While not a record for a Warhol (his multiple Elvis sold for over $100 million), the sale still created shock and awe in the art world.

Warhol is enjoying huge attention for his paintings, particularly those done in the last years of his life when he seemingly “sold out” to commercial interests. In Milwaukee last year I caught a glimpse of a Warhol “Last Decade” exhibit that eventually made its way to the Baltimore Art Museum.

Viewing this display, a Washington Post art critic opined: “By the time he died in 1987 at age 58, Warhol had turned selling out into his principal art form. He held a mirror up to our sold-out commodity culture by selling himself as a cultural commodity. This launched a major movement in art.”

Whatever its true importance, Warhol’s production also met the criteria of this blog: It encompassed bottles as well as booze. Among Andy-Pop artworks are ads he produced for Martini and Rossi Vermouth in a four part series that ran in U.S. magazines from 1954 to 1963. They used a “blotted line” technique that became identified with the artist. Shown here in tandem are two of the ads, one of which featured a Warhol self-portrait. My favorite follows: A scene in Venice with gondola and a bright red sun. And, yes, a bottle of vermouth.

There is no question but that Andy Warhol has set the bar high for future artists to depict liquor bottles. All future efforts may well seem derivative of this master.

Having started with Andy’s multimillion dollar depiction of a single Coke, we end with another Warhol. This one shows 210 Coke bottles on a wall. I counted them. As suggested earlier, could it possibly be worth billions? Maybe it could be sold to help pay off the national debt.
Posted by Jack Sullivan at 6:12 AM No comments: 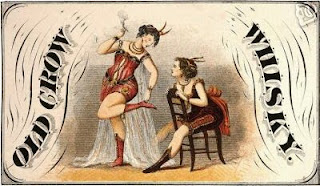 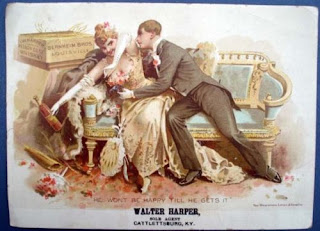 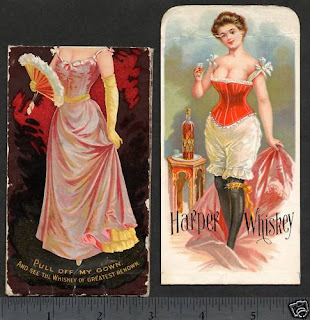 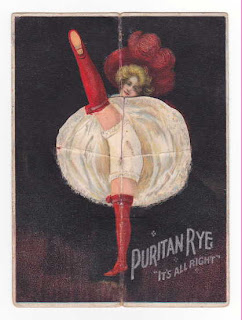 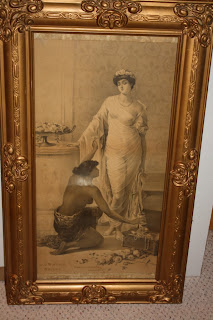 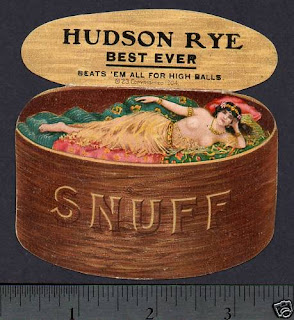 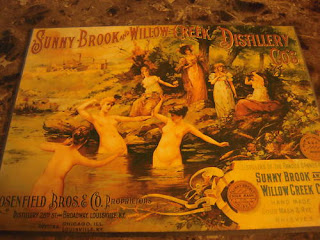 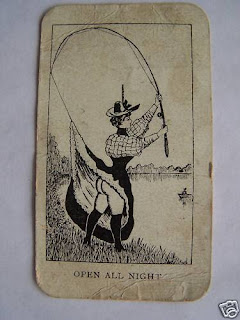 Sex sells -- the ad man’s adage. Several past blogs have dwelt on the use of racy images to grace a saloon (Feb.’10) , merchandise a whiskey brand (Sept.’09), or flog a patent medicine (July’10). When reviewing risqué methods of selling whiskey in the pre-Prohibition era, however, clearly lots more can be said -- and illustrated.

Some of America’s best known brands, including ones that have survived to this day were prone to use the female figure in various states of dress and undress to advertise the virtues of their liquor. A vintage trade card from Old Crow depicted two women, one smoking and both in skimpy outfits. It took little imagination to understand in what profession they were engaged. At this time Old Crow had just come under the control an ownership that combined Kentucky elite distillers and New York money men. The rise of this brand can be traced to aggressive advertising of this kind.

Isaac Berheim and his brother, Bernard, started a wholesale liquor company in Paducah, Kentucky, in 1872. In 1888 he moved to Louisville, bought the Pleasure Ridge Distillery and made a whiskey he called “I.W. Harper,” still a well-known brand. The Bernheim’s built their business by vigorous advertising, including the use of colorful trade cards. Shown here is a double-entendre view of a young stud grabbing at either whiskey or a girl with a low bodice. The caption states: “He won’t be happy ‘til he gets it.”

Risque pull-off and folding trade cards were a staple with the pre-Pro whiskey men and the Bernheims gave the world a prime example with pull-off gown revealing another low bodice, a bottle of whiskey, and a corseted lady of indeterminate occupation. The Puritans were known for being, well, puritanical. Puritan Rye’s fold-out dancer, however, is giving us a good view of her bloomers. I have seen several of these cards and inevitably they develop a hole at a particularly unfortunate place. This brand was the product of David Sachs and Co. of Louisville (1872-1919), whiskey blenders, bottlers and dealers.

Kentucky was not the only source using sexually appealing images to boost whiskey sales. Cincinnati, an Ohio river town even Carry Nation couldn’t shut down, fostered its own set of risque advertising. In those days displaying a female in a state of partial undress was more acceptable if shown in an exotic setting. Hence a picture of a bare-bosomed slave girl serving a statuesque woman in a transparent robe. Clearly this is the Middle East--or is it? The slave has a bottle of Old Windsor Whiskey in her hand, the product of Cincinnati’s Frank G. Tullidge and Co. (1868-1911).

The harem motif also was employed by the Mayer Brothers of Cincinnati (1882-1918) for a trade card merchandising its nationally sold Hudson Rye brand. Closed the card bears the words “Snuff” and “Take a Pinch.” It opens to disclose, not tobacco, but a Middle Eastern odalisque lounging on a divan. Thereby is raised a question: Are we still allowed a pinch?

The Rosenfield Brothers of Chicago (1893-1902), owners of two Louisville distilleries featured three unclothed lasses, with more apparently to come, and found no need for an exotic setting. These ladies appear to be cavorting in a good old American waters without any sign of Victorian modesty. It occurs to me that they had found Rosenfield’s “Sunny Brook” and “Willow Creek” in more ways than one.

The last in this cavalcade of fleshiness comes from the Budweiser Saloon of Springfield Illinois, John Zimmerman Jr., proprietor. The lady appears fully dressed but her fish hook has snagged her dress, revealing --my goodness -- she wears no underclothes. Perhaps even more intriguing is the caption: “Open All Night.” The implications are endless.
Posted by Jack Sullivan at 1:16 PM No comments: