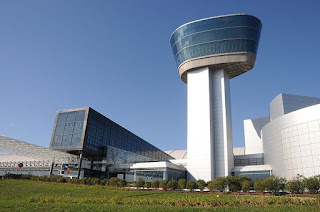 The National Air and Space Museum’s Udvar-Hazy Center, shown here, is a huge facility, capable of holding the “Discovery”  space shuttle and dozens of other large aircraft.  But on a recent visit there,  it was among the smallest exhibits that took my eye.  They were French fiance plates and tiles celebrating the invention of the ascension balloon (“le ballon” in French).  Combining my fascinations with both flight and ceramics,  I photographed a number of them for display on this blog. 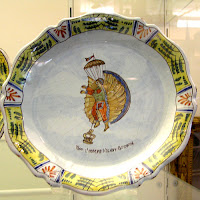 To quote a museum curator, Tom Crouch:  “The invention of the 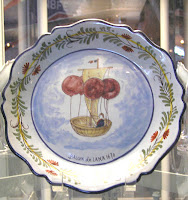 balloon struck the men and women of the late 18th century like a thunderbolt. Enormous crowds gathered in Paris to watch one balloon after another rise above the city rooftops, carrying the first human beings into the air in the closing months of 1783.”   He  added that the balloon sparked new fashion trends and inspired new fads and products. They included dishware and tiles in balloon motifs. 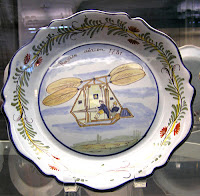 The plates also provide a kind of history of flight.  The first plate shown here celebrates what may have been the first science fiction written in English.   It was  Francis Godwin's The Man in the 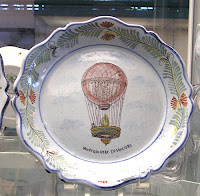 Moon,  published in 1638.  The novel tells the story of Domingo Gonsales, a Spaniard who flies to the moon by geese power and encounters an advanced lunar civilization.  Godwin’s book had an significant impact on the European imagination for centuries after its initial publication.

Like the first plate,  the next one provides a fanciful look at flight. It celebrates the ideas of an Italian monk named Francesco Lana de Terzi.  In 1670 he proposed flight through a flying boat that would be carried aloft by a vacuum balloon.  It was a hypothetical airship that would be evacuated rather than filled with a lighter than air gas such as hydrogen or helium. The main problem with the concept of a vacuum airship, however, is that with a near-vacuum inside the airbag, the outside pressure would exert enormous forces on the bag and cause it to collapse if not strongly supported.  Adding the required supports increases the weight exceeding the total lift capacity of the balloon. 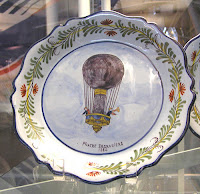 The following plate, “Navite aerion 1781,” depicts another fanciful suggestion for flight.  In this one the pilot rotates four giant fans with the means of hand-powered levers.   This contraption imagined even lifting a passenger.  Even today mankind has not figured out how to lift an aircraft off the ground using only person-power, although plenty of attempts have been made.

The fourth plate celebrates the balloon ascension that galvanized Europe.   Joseph and Jacques Montgolfier, paper mill owners, built a large paper-lined silk balloon and held a flame near the opening at the bottom. The bag expanded with hot air and floated upward.  They demonstrated it on June 4, 1783, tethered and with an empty basket.  About three months later a Montgolfier balloon carrying a sheep, a rooster and a duck flew for eight minutes in front of Louis XVI, Marie Antoinette, and the French court.   Less than a month later, an untethered balloon carrying two men, one of them Pilatre de Rozier, became the first balloon to carry human passengers.

De Rozier would go on to become one of France’s most famous balloonists.  A chemist by occupation, he also undertook experiments in physics, researching the new field of gases and even invented a respirator.  Ballooning became his passion and in future months he set records for speed, altitude and distance.   In 1875, with a companion, De Rozier attempted to cross the English Channel in a balloon that used both hydrogen and hot air.  Setting off from Boulogne,  the balloon almost immediately was blown back,  suddenly deflated and crashed, killing both de Rozier and his 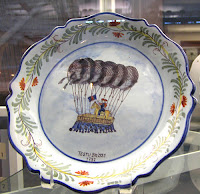 Pierre Testu-Brissy,  celebrated on the next plate,  like De Rozier,  was a scientist.  He made his first balloon ascent in 1785, and the first night ascent on June 18, 1786, this time in a hydrogen balloon. He made the world's first electrical observations on that date, , as he ascended into thunderclouds.  Testu-Brissy  undertook more than 50 flights in his lifetime, including the first ascent on horseback on October 16, 1798 from Bellevue Park in Paris. He and his horse made a number of subsequent flights. 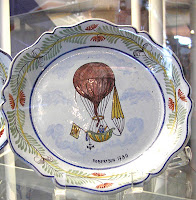 The next plate celebrates Étienne-Gaspard Robert (1763–1837), often known by the stage name of "Robertson.”   He was a prominent Belgian stage magician. Charles Dickens once described him as "an honorable and well-educated showman.”  Alongside his pioneering work on projection techniques for his shows Robert was also a physics lecturer and a celebrated balloonist at this time of great development in lighter-than-air craft.  In 1806 an audience of 50,000, including the Danish royal family, gathered at Rosenborg Castle in Copenhagen, to see Robertson and his balloon. He flew about twenty miles before landing safely – a remarkable feat for the time. 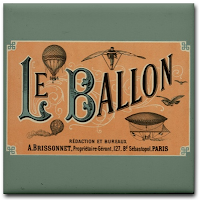 These are just a few of the ceramics in the Udvar-Hazy Museum.  There are also French cups and saucers, vases and tiles celebrating the early attempts at flight.  They so stimulated my interest that I bought a tile to sit on my desk that features the word “Le Ballon.”   A reproduction from an old book or magazine, the tile depicts an advertisement for the Paris aeronautical journal of that name from about 1883.  It illustrates various means of flight, including some real, some fanciful.

The last illustration here also is from a French source.  Although the French took their ballooning very seriously,  they could also see humor in the efforts,  such as this gentleman voyaging to the moon via balloons and pedal power.   Interestingly, current efforts at manpowered flight also center around peddling a bicycle-like contraption. 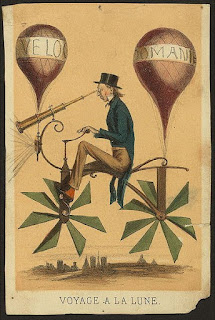 Posted by Jack Sullivan at 1:12 PM No comments: 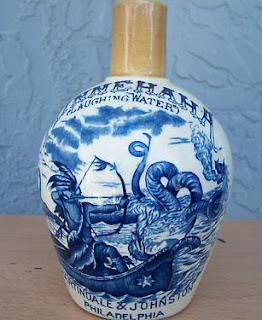 After more than 30 years tracking “fancy” American whiskey jugs, I seldom see anything new and startling.   Last month, however,  a pre-Prohibition whiskey ceramic was put for auction on eBay that I had never seen before. Shown here, it bears the name “Minnehaha - Laughing Waters.”   It bears a the cobalt blue underglaze transfer design of a Indian brave in a canoe attacking a sea serpent with a bow and arrow,  while a European gentleman lies prone at his side.

The jug is one of three different jugs bearing the Minnehaha name and an elaborate monogram on the back for the issuing company,  Martindale & Johnson of Philadelphia.  According to reports, this was a grocery firm, founded about 1869.   A letterhead from 1883 shows the proprietors as Thomas C. Martindale and William Johnston.  They are billed as “Importers, Grocers, Wine and Spirits Merchants.”  Their trade card emphases dealing in California-origin merchandise. 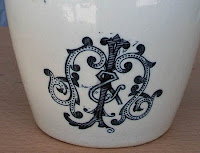 None of this explains why the firm saw fit to issue three of the most highly sought ceramic whiskeys extant today.   In addition to the first jug shown,  the grocers issued two others,    One features an Indian maiden sitting near a waterfalls. It comes in two versions. In one  the title is the same as on the new find and the illustration is in a crisp dark cobalt. In the second “Laughing Waters” is missing and the cartoon is lighter blue and lacks strong definition. This jug also

is found in a sepia brown.

The third jug has nothing to do with Native Americans.  It appears to depict two small birds amidst a floral background looking intently on the ground.   On further inspection it would seem that the birds are on an elaborate Victorian stage and illuminated by rows of footlights. The jug comes in a sepia brown.   Like the others it bears the elaborate M&J monogram at the back.  Like the new find, this jug is quite rare and although I once owned one, I have seen no more than three or four over time.

The name “Minnehaha” is derived from the poem by Henry Longfellow called “Song of Hiawatha.”  It is a long epic tale about an Indian brave who does many heroic deeds to assist his tribe.  It was staple reading in American schools for decades and the characters would have been familiar to most people of the 19th and early 20th Century. We should assume that the Indian shooting the serpent is Hiawatha.   Minnehaha was his sweetheart.

This Indian brave frequently was depicted with a bow and arrow.  Seen here is the front cover of the Longfellow poem, illustrated by the famous American artist of the West, Frederick Remington.  Hiawatha is shown taking aim at a deer that lies ahead of him in the forest.  Not a sea serpent in sight.  In fact, although I have scoured the poem from stem to stern,  I cannot find any reference to Hiawatha besting a sea 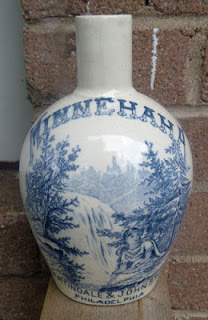 serpent.  And white men arrive in the poem only at the very end and with little attention.  The encounter depicted on the jug appears to have been the concoction of the artist, identity unknown. 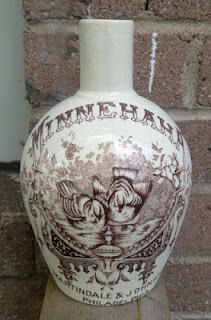 Still to be determined was why Martindale & Johnson would go to such lengths to put their whiskey in such attractive, and probably expensive,  containers.  The answer may lie with Thomas Martindale.   He was a somewhat flamboyant character.  Born in England, he was brought to the United States with his family when he was eight years old.   In his lifetime he amassed a considerable fortune, much of it from selling whiskey.  His fascination with Hiawatha may lie in his passion for hunting, as evidenced from the trophies on display in his home.   The photo shown here is from about 1900.   When Martindale died in 1916, he was on a trip in Alaska,  likely hunting big game.


The newly found Minnehaha was purchased for $811 on eBay October 6.  It was close to a record for an American whiskey ceramic.   When the jug sold I had a strong suspicion that the ultimate buyer was a collector based in the Southwest U.S., who is a longtime acquaintance.  Before I could check, this individual emailed me out of the blue, “ just to see how I was faring.”  It immediately suggested to me that he had been the high bidder and I replied to ask him.  He confirmed the sale.

Even though most fancy whiskey jugs don’t bring exalted prices,  I think this collector got a bargain.   Not only is the transfer cartoon attractive and well executed,  the jug is in reasonable shape for its age, with just a few dings.  Moreover, it is a true rarity; as far as I know it is the first jug of its kind to emerge for public sale in more than three decades.