From Toilets to Tankards, Maddock Could Shape the Pot 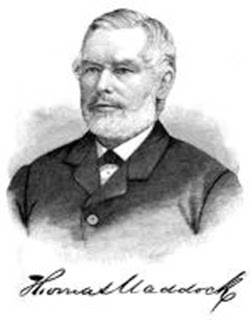 Thomas Maddock, shown here, knew the ceramics business when he emigrated from England in 1847.  Eventually becoming a partner in a Trenton, New Jersey, pottery firm, Maddock determined that “sanitary ware” (read bathroom stuff) that had been imported from abroad could be made in the U.S.  He soon captured 80% of the U.S. market for sinks, toilets, and chamber pots and then turned back to his roots in decorated stoneware and china.  Among the results were an impressive array of beer mugs, steins and pitchers for souvenir purposes, hotel use and fraternal organizations. 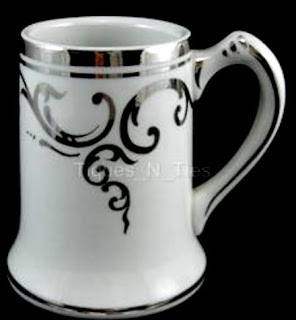 An excellent example of Maddock’s craft is a mug that was made for a convention of the National Association of Master Plumbers held in Atlantic City in 1914.  Likely because these same plumbers were installing Maddock sinks and toilets, the company produced a extraordinary vessel. It featured a platinum or silver “art nouveau” design of swirls and bands.  By that time, Thomas Maddock had bought out his partners, taken his four sons into the business, and in 1903 died at the age of 85. 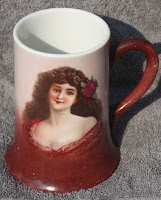 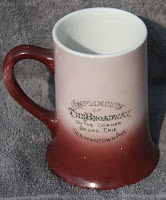 Maddock’s sons continued to be in the forefront of decorated porcelain.  The quality of their transfer printing rivaled England and had few peers in the U.S.  A prime example of the art is the beer mug shown here.  A comely lass with a low cut bodice looks out at us with a slight fetching smile.  On the other side we learn that this mug was an advertising give-away from The Broadway of Erie, Pennsylvania, likely a pre-Prohibition saloon. 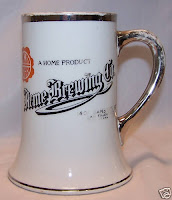 A  beer stein from the pottery shows wear on both the handle, rim and lettering, suggesting that an “overglaze” transfer was used.  This method, while less expensive to produce than under-glaze, is likely to show wear over time since it must adhere to the much harder porcelain surface.  Although there have been several breweries bearing the name, this item appears to be from the Acme Brewing Company of San Francisco. 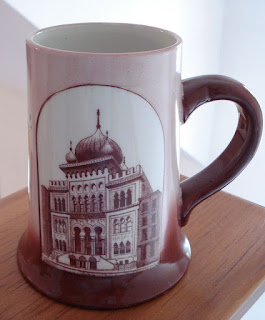 Important customers for the Maddocks were fraternal organizations, particularly groups associated with the Masons.  Shown here is stein that is a excellent example of the family’s ability to produce elaborate decorated stoneware.  It shows the Lulu Shriners temple in Atlanta, Georgia, and dates from about 1904.   These would have been ordered from the Trenton pottery as souvenirs of  anniversaries or other special occasions.

The Maddock artisans had the “in house” ability  to produce their own transfer engravings and decals in order to customize a standard line of souvenir ceramic forms.  They developed a enameling process that allowed the pottery to copy fine line designs from steel engravings, beyond much of the competition’s ability to copy. 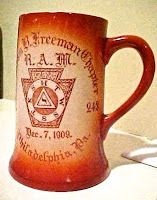 In December 1909 the company provided a celebratory stein for the Tristam B. Freedman Chapter of Masons in Philadelphia.  Named for the English immigrant founder of a famous auction house in the City of Brotherly Love, this chapter was founded  by seven break-away Masonic brethren in 1873.  Note that the symbolism on the stein includes the keystone recognizing Pennsylvania as the Keystone State. 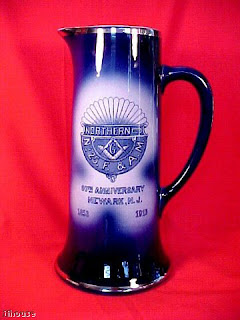 Frequent organizational commissions for Maddock were for sets of ware that included a tall pitcher with matching mugs.  Shown here is an example of a pitcher made to celebrate the 90th Anniversary of the Northern Chapter No. 25 of Masons from Newark, New Jersey.  Dated 1913, this vessel is particular notable for the elegant shading of blue from light to dark.  The set below shows another example of the company mastery of design and underglaze transfer printing.  It shows men bowling and features attractive silver trim.  These ceramics were made for an Eagles Club event. 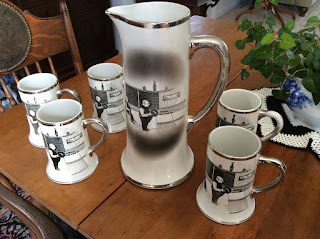 We move from Maddock-produced artsy production to perhaps the company’s most remembered contribution to the American pottery scene: Its football steins.  With Harry Maddock listed as the inventor, the company was awarded a patent on this item in January 1905 and produced thousands of them for fans. 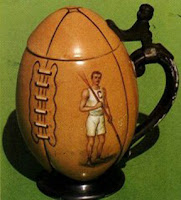 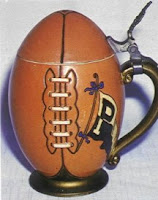 Ivy League schools seem particularly well represented in the output.  Shown below are two examples.  The Princeton pigskin has the laces showing at the side;  on the Cornell example, they sit on the front.  Somewhat incongruous, however, is the figure on the latter.  It appears to be a track and field participant, a pole vaulter or javelin thrower.   Thinly clad as he is, he would be mincemeat on the gridiron. 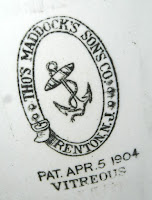 After the death of Thomas Maddock, his sons changed the name of the firm, to Thomas Maddock’s Sons Company.  One son, John Maddock, left and started his own pottery company in Trenton; his mark can be found on items similar to those shown here.  The company that Thomas had founded was acquired in 1929 by the Sanitary Manufacturing Company that ultimately became American Standard, a familiar name in bathroom fixtures today.

It is worth mentioning the Maddock firm for two other achievements.  The company is given credit for inventing the flush mechanism of the toilet we know today, a highly useful modern convenience.  Another is the chamber pot it produced about 1890 that resided in the Lincoln Bedroom of the White House for decades until President Truman’s wife, Bess, gave it away to a servant, likely feeling it had outlived its usefulness.

For a long time it has been my impression that Thomas and his sons have gone without significant recognition for their ceramic creations.  Miller’s “20th Century Ceramics,” a standard reference, devotes to the Trenton pottery only a brief paragraph and one photo of a plate. Why?  It occurs to me that perhaps the Maddocks’ mass production of bathroom “potties” has led to diminished respect for its decorative pottery.

There was a time in America when funeral homes were the chief purveyor of  ambulance services, a phenomenon I have highlighted in two earlier posts [see references below]. Someone needing immediate hospital attention often would be transported there by the local undertaker who frequently issued artifacts such as paperweights to advertise the service. 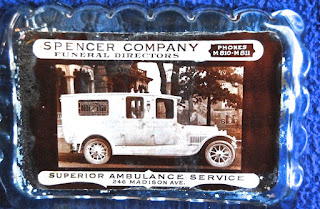 Memphis blogger Vance Lauderdale sees this practice as a business conflict: “This is just so wrong.  It would be like morticians sitting in the emergency rooms, with an embalming kit in their laps.”  Among the Memphis undertakers to whom he was referring was Spencer Company.   Its scalloped glass weight advertised “Superior Ambulance Service.”  The stained glass windows at the rear would indicate that their vehicle also doubled as a hearse. 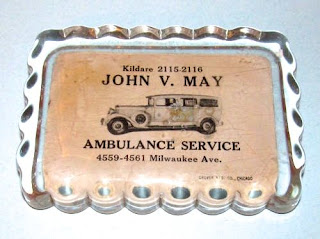 A fancier ambulance with a longer body and front mounted spare tire graced thescalloped paperweight from John V. May.  May, a lifelong resident of Chicago, opened his undertaking business in 1914 on Milwaukee Avenue.  As was often the case he and his family lived on the premises.  Many other morticians were completing with May for customers and his ambulance service was a way of setting himself apart and gaining a business advantage. 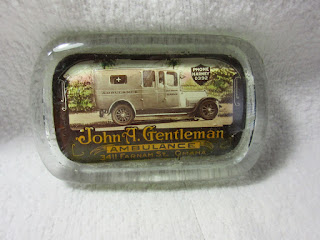 Like May, John A. Gentleman was an undertaker, opening his Omaha, Nebraska, funeral home in 1906.  In the 1920s the firm moved to the “Gold Coast” area of Omaha at 34th and Farnam Street and issued a paperweight featuring his ambulance.  Gentleman worked 50 years as an undertaker, before retiring in 1956 and selling his business to new owners who kept his name on the funeral home, one still in operation. 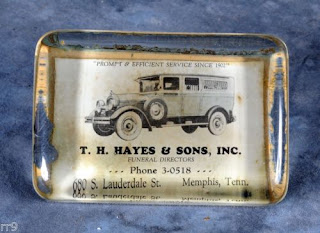 An acclaimed African-American business in Memphis was T. H. Hayes and Sons Funeral Home, run by Thomas Henry Hayes, his wife, and two sons.  The father founded it in 1902.  It is said that his range of services were affordable to the working class as well as to the elite.  In addition to his ambulance Hayes had ten rigs, five hearses, carriages, and 12 horses in his stables.  When the funeral home closed in the early 1970s it was acclaimed Memphis oldest African- American owned business. 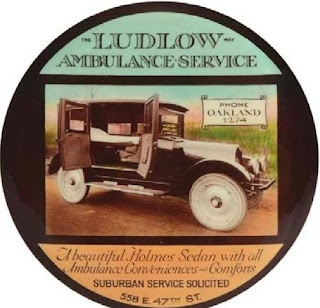 One of the few vehicles whose make was identified on an advertising artifact was this Holmes Sedan from the Ludlow Ambulance Service.  The Holmes was a popular air-cooled American automobile built from 1918 to 1923 in Canton, Ohio. The car was famous for its louvered front grill that included a series of horizontal slits bringing in air any.  An embezzlement by a top company executive in 1921 sealed the fate of the company founded by Engineer Arthur Holmes and it failed in 1923. 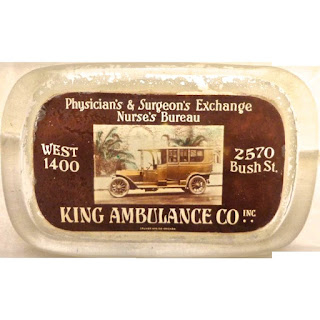 Perhaps the King Ambulance weight does not belong in this list.  It was truly a doctor and hospital-based service, unaffiliated with any funeral home.  Founded in 1886 and one of the first physicians exchanges and nurses registries in San Francisco, it was housed in a renovated Victorian mansion in the center city.  In 1954 King merged with American Ambulance.  The resulting King-American Ambulance Company has established itself as the longest operating private ambulance service in San Francisco and the West Coast. 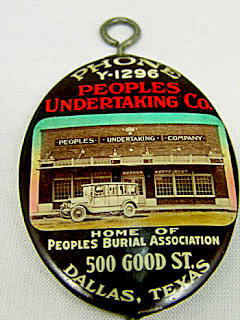 The Peoples Undertaking Company, a Dallas, Texas, business that advertised as the home of the “Peoples Burial Association,” issued this celluloid item that is described as a “paper clip and hook.”  It occurs to me that It also might have been hung on a Christmas tree as an ornament, although it lacks a certain festive flavor.  I have been unable to find any information on this establishment.  The building shown here for 500 South Good Street appears to have been replaced. 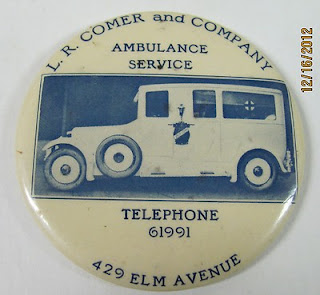 With this celluloid pocket mirror we appear to return to an ambulance clearly being part of a funeral home business, this one in Norfolk, Virginia.  It is from L. R. Cromer and Company that appears to be the forerunner of a still extant funeral business in the that city. 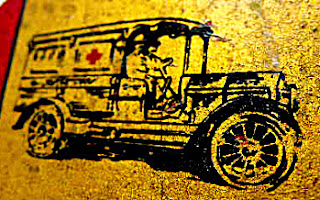 Often in small town America, even into mid-20th Century, the undertaker also was a furniture dealer.  Makes sense. The funeral director was buying caskets, a kind of furniture, why not add tables and chairs?  Bayermann & Krug of Racine, Wisconsin, combined those businesses and added an ambulance service.  They issued a clothes brush for their clients that up close reveals a vehicle with a red cross in the window motoring along.
Last month I did a post on paperweights that were issued by coffin makers to advertise their works.  One outfit particularly known and collected for their casket and animal form weights has been Crane & Breed.  At that time I was unaware that this Cincinnati company also built hearses — hearses that could double as ambulances, as in the photo here.  This model was described thus:  “The body is painted bronze green and the running gear carmine. The interior is finished in solid mahogany with an elevated cot on rollers. The vehicle is fitted with the best rubber tires and in winter will be heated with carbon stoves.”   That elevated cot, of course, could accommodate a patient on the way to the hospital or a body going to the graveyard. The hearse/ambulance automobile hybrid lasted some 70 years.  Until as late as 1979 hearses in the U.S. could be combination coaches that also served as ambulances.  In the late 1970s, however, stricter Federal standards were decreed for ambulances.  The hybrids were unable to meet them and manufacturing was discontinued.  In many smaller communities even today ambulances in vehicles distinct from hearses continue to be the business of the local undertaker.

Note: My first article on this subject, “Where to Buddy?  Hospital or Graveyard?” was posted during July 2009. It presented six paperweights and two pocket mirrors.  A second, called  “Chasing the Ambulance:  But Wait…Is It a Hearse?” followed in May 2013.  That one displayed ten weights.