Metal Whiskeys and the Louisville Brothers-in-Law 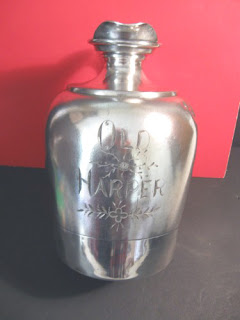 This is the third in a series of articles on metal whiskey objects,  the first two having been posted in December 2010 and September 2011.  This one focusses on just two distillers,  Isaac Bernheim, creator of the famous I.W. Harper Brand, and his brother-in-law,  Nathan M. Uri.  Each issued multiple whiskey-related containers of metal, perhaps in competition with each other.

Bernheim, born in Germany,  emigrated to the United States in 1867 with $4.00 in his pocket.  For a while he worked as a peddler,  traveling through Pennsylvania on horseback selling household items to housewives.   Then his horse died.  So he packed up and moved to Paducah, Kentucky, where he went to work in the liquor trade.  More important,  Isaac met the Uri family,  long established Kentucky residents who for years had been in the whiskey business.   He married Amanda Uri and in 1872 joined up with her brother, Nathan, in a liquor sales firm called Bernheim Bros. and Uri.  (The other Bernheim 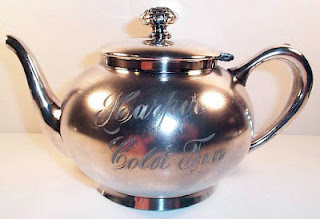 brother was Bernard whom Isaac had brought from Germany).

Because of Paducah’s proximity to large waterways,  the business grew rapidly.  About 1888,  the company bought the Pleasure Ridge Park Distillery and renamed it the Bernheim Distillery Company.  About the same time,  the Bernheims and Uri moved their business to Louisville, in order to be closer to their distillery.   Soon they began the production of an elite whiskey brand called I.W. Harper, a name they had trademarked in 1879. 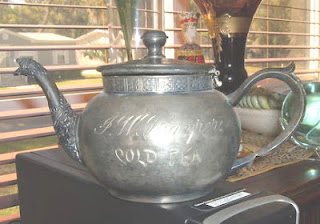 Within three years of the move,  Nathan Uri had left the partnership and in 1893 set up his own firm.  called N.M. Uri & Co.  The reasons for the split, to my knowledge, have never been adequately explained.  Uri bought his own whiskey production facility, the International Distillery at Hunters Station, Kentucky.  His principal brand was “Parker Rye” which he advertised nationally.   His business flourished as did Bernheim Bros. 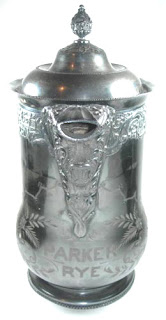 jackets” either to contain or advertise their whiskey.   Shown here first are three such items from Bernheim brothers.  The Old Harper decanter is labeled “quadruple silver plate.”  It carries no maker’s mark but probably was the product of the Homan Silver Plate Company.  Founded in 1847, it was located in Cincinnati and produced such silver objects for distilleries, breweries, hotels, restaurants and even riverboat companies.

The two teapots following were made by other companies.  The just plain “Harper” teapot was the product of the Taunton Silver Company. During the 19th century, Taunton became known as the "Silver City", as it was home to many silversmithing operations, including Reed & Barton, F.B. Rogers, and Taunton Silver.

The second teapot is marked on the bottom as quadruple silver plate and the product of the Western Silver Metal Company.  Brothers-in-law Louis Schnitzer and Nathan Gelfman had both been experienced metalworkers in their homeland of Kiev, Russia.  In the early 1920s, they 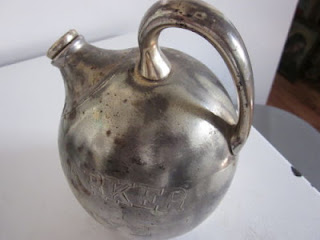 were polishing and plating silver at their silver housewares business in New York City called Western Silver Works, Inc.  This may have been one of their products.

Not to be outdone by the Isaac Bernheim,  Nathan Uri also produced multiple metal items for his whiskey.  The silver decanter marked “Parker Rye” on the base is a Homan-made product.  It is marked “Special Metal,” another name for silver soldered silver “quadruple” plate.  The whiskey jug that follows mimics the shape of many ceramic jugs of the time.  It says “Parker” on one side and “Rye” on the other.  It 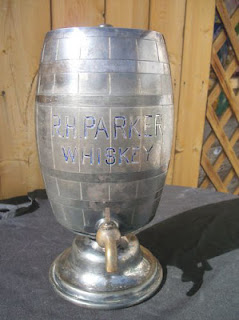 is marked quadruple plated with a shamrock logo and “afc co.”

The third container is a whiskey dispenser with a spigot.  It presumably could hold a gallon or so of Parker Rye and be ready for the saloonkeeper to turn the handle.  Because it was impossible to tell just what these back of the bar items were dispensing,  they were banned by law after the repeal of Prohibition.

Uri issued two teapots.  The first shown here advertises “R. H. Parker Whiskey.”  I personally like the simple but elegant lines of this object.  My notes, unfortunately, are silent on its maker.  The second teapot, shown in in two views,  is once again a Homan product.  The base also says that it is warranted quadruple plate, with an additional statement “808 Special H Metal.”

Why are these brothers-in-law each responsible for issuing to 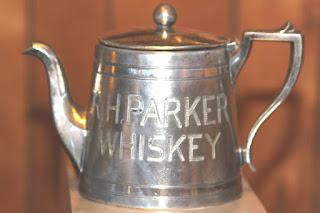 favored customers these several whiskey metal artifacts?  My guess that rivalry between them spurred each to try to outdo the other in providing attractive containers for bar use.  Whether Uri was imitating Bernheim or Bernheim was imitating Uri, however, remains undetermined.

Politicians with Feats of Clay

It is 2012. The country is immersed in national politics, with the primary seasons over and the head-to-head between Barak Obama and Mitt Romney in full steam. Accordingly it seems appropriate to take a look at how Presidential contenders and their parties have been captured in ceramics down through the years. 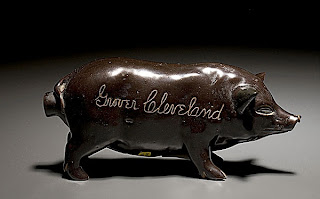 Grover Cleveland was the first Democratic President following the Civil War. . Cleveland also is the only U.S. President to serve two nonconsecutive terms (1885–1889 and 1893–1897) and therefore is the only individual to be counted twice in the numbering of the presidents.  He also was a man of tremendous girth so that it is not clear whether the pottery pig shown here was a ceramic artifact from his supporters or his detractors.

Teddy Roosevelt became Chief Executive in 1901 when, as vice president, President McKinley was assassinated.  Roosevelt was 42 years old when sworn in as President of the United States in 1901, making him the youngest president ever. Known for his “cowboy” persona,  Roosevelt declared once that in foreign affairs it was good to “walk softly but carry big stick.”   An enterprising potter incorporated that idea in a corked whiskey flask. The item probably dates from Teddy’s second term, 1905-1909. 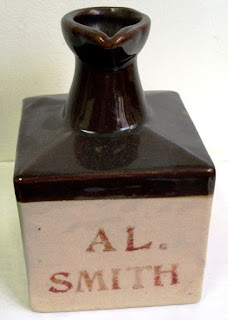 The small whiskey jug shown here was entirely appropriate vessel to  carry the name of  “Al Smith.”   Smith,  an Irishman, a Catholic and a very popular governor of New York, was an unabashed “Wet.”  That is, he opposed National Prohibition of alcohol which had been imposed in 1920.  His opponent, Herbert Hoover was a Dry and in the election of 1928 he trounced Smith in a landslide.

Old timers may remember the time when the rooster was a popular symbol of Democrats.  In the 20th Century it was the donkey that came to epitomize the party of Jefferson and Jackson.  Here it is a ceramic figural labeled “New Deal Coin Bank.” The designation likely was a sarcastic comment on President Franklin Roosevelt’s programs which were widely attacked by for allegedly putting money into Democratic 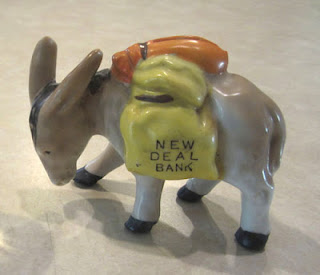 Like the donkey, the elephant has become a familiar object in political parlance as a symbol for the Republican Party.   Less well known may be Everett Dirksen, after whom one of the Washington D.C. Senate office buildings is named.  In December 1943, Congressman Dirksen announced that he would be a candidate for the Republican Presidential nomination in 1944. He stated that a coalition of Midwestern Republican Congressmen had urged him to run and that his campaign was serious.  Word was he really was trying to syphon votes away from another Midwest Republican, Wendell Wilkie, or was angling to become vice president.  When all 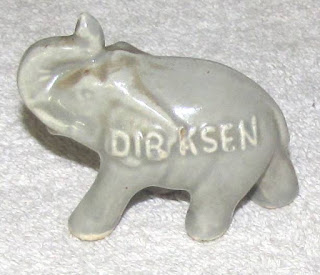 was said and done, Dirksen received not a single vote for either office at the 1944 Republican Convention. He subsequently would be elected to the U.S. Senate and part of the Republican leadership there.

Adlai Stevenson was another politician who twice sought the presidency.   Stevenson had been a very successful governor of Illinois and the Democratic Party was strongly behind his candidacy.  But in the elections of both 1952 and 1956 he faced Dwight D. Eisenhower,  a World War Two general and hero.  A coffee cup depicted Stevenson apparently riding the Demo donkey toward the White House.  He never got 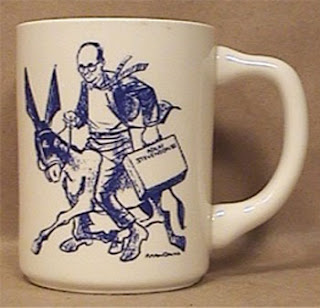 The ceramic ashtray, next in line,  is clearly a satire with its message: “Nixon and Agnew in ‘76.” By the time of the 1976 Presidential campaign,  Richard Nixon had left the White House in disgrace over Watergate and Spiro Agnew had preceded him from the vice presidency because of a criminal conviction in Maryland.  Neither was in the slightest contention for the Republican nomination.  Jerry Ford and Nelson Rockefeller were the (losing) GOP candidates that year.  The winner, however, was a man whose toothy grin marked a field day for cartoonists and caricaturist -- Jimmy Carter.  His face is unmistakable on a ceramic coffee mug. 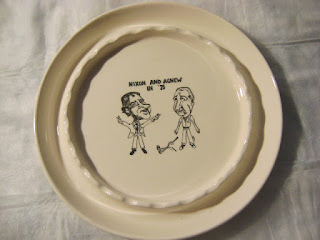 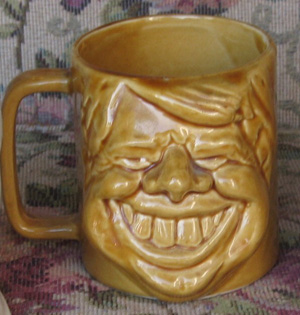 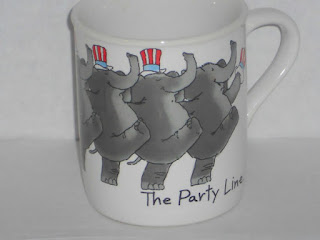 Beer mugs and coffee cups frequently have been the utilitarian ceramic of choice for political comment.   The elephants shown here, dancing in line, date from 1987 during the Reagan Administration.  Republicans in Congress were well known for hewing to party discipline and doing the will of the President.  The cup is an affectionate spoof on “keeping the party line.”

Our final piece brings the story pretty much up to date.   The last ceramic is a small statue of George W. Bush.   Bush is as recognizable on the item as the former President as Jimmy Carter on the coffee mug.  Nevertheless, I am somewhat mystified by the crown.   In fairness, whatever Bush’s 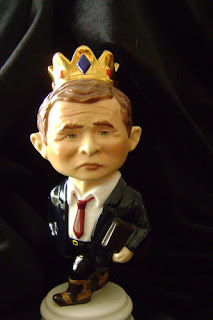 shortcomings may have been, taking on imperial airs was not one of them.   That said, the statue fully is in the American tradition of satirizing our leaders.

Here we have seen politicians described and sometimes satirized in pottery “feats of clay.”  Not a new phenomenon.  We have seen examples ranging for more than 132 years in American history.  Let’s hope the tradition lasts another 127 years, one symbol of free speech in America.  And, by the way,  a source of interesting collectibles.


Posted by Jack Sullivan at 6:38 AM No comments: