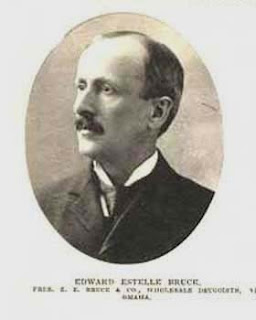 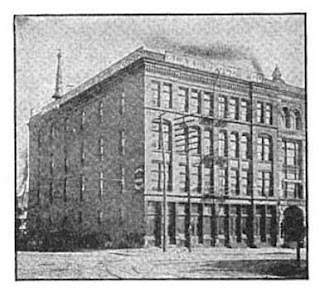 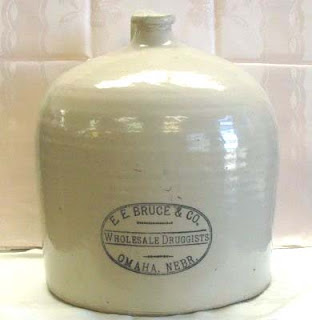 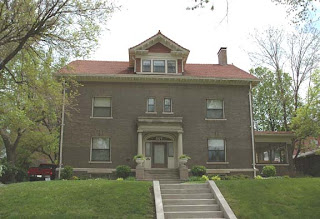 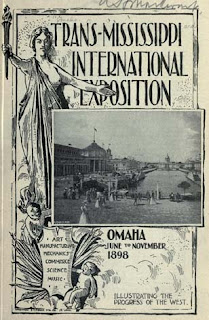 For some 34 years, I have been keep track of American ceramic whiskey jugs and have written two books about them, as well as having collected and viewed hundreds of examples As a result, it is very unusual to be presented with a jug that I have never seen before, particularly one that was produced by a pottery about which I have written extensively.

That is exactly what happened in January 2011 when John Bass of Redding, California, emailed me a picture of a ceramic whiskey, shown here, one completely unknown to me. The the shape and decoration on the jug are exactly the same as a jug from the Wm. Edwards Co. of Cleveland, Ohio. That jug was featured in my blog of November 2009. Both ceramics are marked as the product of Sherwood Bros. of New Brighton, Pennsylvania. Mr. Bass’s jug, however, advertises Country Club Bourbon from E.E. Bruce and Co. of Omaha, Nebraska.

Mr. Bass sent me the picture after seeing my article on Sherwood Bros. pottery. The bottle clearly was well traveled from Omaha. It had been owned by his mother in California. She told him that it had been given to her 40years earlier by her mother-in-law in New Mexico. That lady claimed that the ceramic was then 100 years old. The dating was not quite correct. The ceramic whiskey now is more than100 years old and can claim antique status but it was not quite that vintage when his mother received it. The dating, however, does not compromise the uniqueness of this new find.

Who was E.E. Bruce and his company? Shown here, Edwin Estelle Bruce was a leading druggist and businessman in Omaha. He opened an wholesale drug business in 1887, accounted by contemporaries as “one of the finest in the West.” His company occupied a four story building in Omaha. Like many other drug companies, Bruce’s firm also sold a line of whiskey -- the flagship brand being Country Club Bourbon.

Not only did E.E. Bruce order a whiskey bottle from Sherwood Brothers, he also employed jugs from the famed Redwing potteries of Minnesota. A two-gallon Redwing jug bearing Bruce’s logo is shown here. Made rich by his drug and liquor business, Bruce occupied a Georgian Revival mansion, located in Omaha's Gold Coast neighborhood. He also was well-known in Omaha business circles, according to a contemporary account, respected for his ability, enterprise and ingenuity.

Presumably as a result of this reputation, Bruce was tapped by the elite of the city to be a principal officer for a world’s fair known as the Trans-Mississippi International Exposition. This event was inspired by leading Nebraskans to illustrate the “progress of the West,” highlight the 24 states and territories west of the Mississippi River, and meant to spur economic development. Held a mere five years after Chicago’s highly successful1893 Columbian Exposition, the Exposition ran from June to November 1898.

Bruce held the pivotal position of Exhibits Manager for the Exposition, an extravaganza that covered 108 city blocks in Omaha and involved 4,062 individual exhibits. The success of his efforts can be measured in the 2.6 million people who visited during the six month run of the fair. Constructed quickly of flimsy materials, none of the Exposition buildings survives today. Bruce’s mansion still stands. Moreover, we can remember this Omaha druggist and whiskey dealer by the ceramic jugs, including a new find from Sherwood Bros., that are part of his legacy. 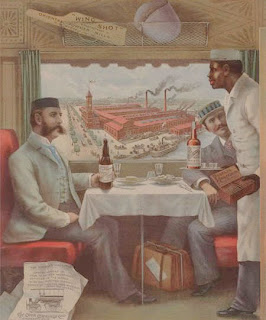 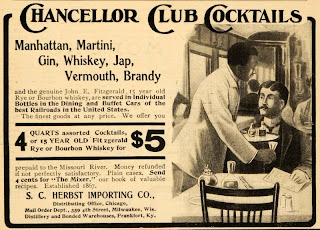 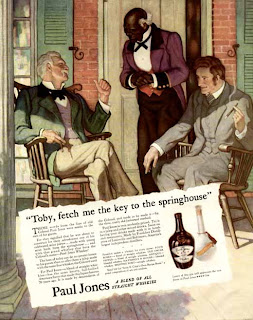 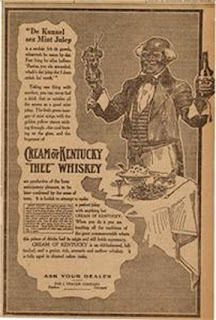 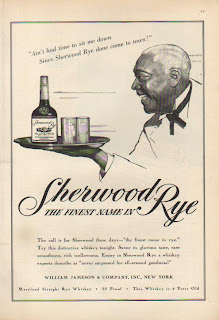 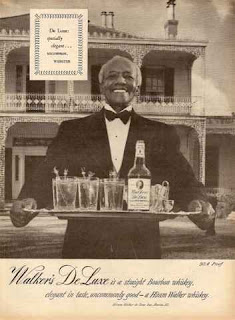 Last year about this time, as an observance of February’s Black History Month, I featured a blog about the way African Americans have been depicted in whiskey advertising throughout the years. Many of the images proved to be degrading or at best depicted blacks in menial or serving positions. This year my Black History blog will concentrate on blacks in wait service.

Here my conclusion is that whiskey ads often treated black waiters with more dignity before, rather than after, Prohibition. A case in point is an 1894 advertising poster issued by a Cincinnati-based railway that also featured a number of products manufactured in the city. The dignified waiter holds on a tray a bottle of Cabinet Whiskey he is offering to two passengers. This whiskey was a product of the Freiberg and Workum Co. (1855-1918). From distilleries in the company owned in Kentucky they produced and distributed a number of nationally-known brands.

Similarly dignified is the waiter who is serving 15-year-old Old Fitzgerald whiskey to a passenger in an individual small bottle on what the ad claims is one of “the best Railroads in the United States.” This is a 1901 ad from the S.C. Herbst Importing Co., headquartered in Milwaukee with a branch office in Chicago. Founded in 1870, the Herbst organization survived until Prohibition.

Contrast those first two examples with a post-Prohibition1935 ad from Paul Jones whiskey, a brand was from Frankfort Distilleries. Founded after the Civil War by Paul Jones, a whiskey salesman, the company moved to Louisville, Kentucky, in 1886. Frankfort Distilleries survived the years of “Dry” (1920-1934) becoming one of the few outfits that were allowed to produce “medicinal” whiskey under government permit. Providing a quarter of the national supply, the company boasted that 20,000 doctors had written prescriptions for its “spiritus frumenti alcoholic stimulant” -- the word “whiskey” having been banished.

After Repeal, Frankfort Distilleries had a head start on its competition. It funded national ad campaigns that harked back to a pre-Civil War era when plantation owners could sit, smoke cigars and tell the obsequious waiter, “Toby, fetch me the key to the springhouse.” The gentleman at left in the ad was supposed to be the redoubtable, but now long dead, Paul Jones himself. The message here was clear: Let us celebrate the good old days when slavery was in flower.

Other ads emphasized the subordinate nature of the black waiters by giving them ungrammatical speech patterns. Cream of Kentucky “Thee” Whiskey, for example, featured an ad in which a waiter holds a bottle in one hand and a drink in the other. He declaims: “De Kunnel sez Mint Julep.” This brand originated with the Rush Distilling Co. of Jacksonville, Florida.

Similar illiterate speech appears in a 1940s ad from Sherwood Rye. The smiling waiter here tells us “Ain’t had time to sit me down, since Sherwood Rye done come to town.” The same rhyming waiter in another Sherwood ad -- not shown here -- says: “De man who calls for Sherwood Rye, sure knows the bestest brand to buy.” Sherwood Distillery was founded in 1882 in Cockeysville, Maryland. The original operation was closed with Prohibition and the buildings destroyed in 1926. However, the brand name survived and was produced post-Prohibition until the 1950s from a facility in Westminster, Maryland.

Calvert Whiskey took a two page ad in Life Magazine in 1941 to show a black waiter with two whiskey collins on a tray. His speech is grammatical but his manner is a wide grin that communicates how happy he is to be serving. Originally part of the Fleischmann distilling operation in Relay, Maryland, the Calvert facilities and brand name were purchased in 1933 by the Canadian Joseph E. Seagram and Son.

A final example is from Walker’s Deluxe straight bourbon. From 1947 to 1953 this brand featured the same very distinguished black waiter, usually holding a tray on a bottle of the whiskey. Although there was nothing particularly servile in this waiter’s attitude, the ad-makers in one 1953 instance could not avoid the temptation to picture him in front of an old Southern plantation house -- once again harking back to those pre-bellum days. The brand was from Hiram Walker of Detroit and Walkerville, Ontario.

Since the Civil Rights Era of the 1960s, a half century ago, the depiction of black waiters has disappeared from all U.S. whiskey advertising. Other things have changed as well. Now a highly educated, articulate African-American is in the White House. Toby need no longer fetch.
Posted by Jack Sullivan at 6:05 AM 2 comments: