Funning — and Punning — with Beer

As somber and dignified as he looks here,  Adolphus Busch had a definite “funny bone” in that stiff Germanic body of his.  In my May 2014 post on this blog I featured the cards he issued for his beers that spoofed Wagner’s operas and well-known plays.  The post cards and other ads shown here all refer to the products of his St. Louis brewery  — but none likely were issued by Adolphus.  It is open to question how much he would have enjoyed them. 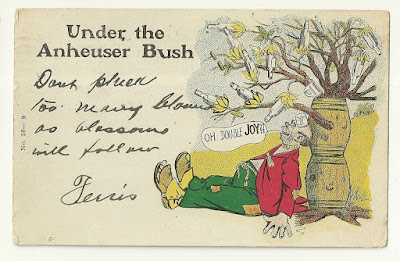 The card shown above under the heading, “Under the Anheuser Bush” is a direct takeoff of a popular cartoon figure of Happy Hooligan.  This was a popular and influential early American comic strip by the celebrated cartoonist Frederick Burr Opper that made its debut on Sunday, March 11, 1900 in Hearst newspapers,  Happy Hooligan was luckless tramp who always wore a tin can for a hat. The tramp figure here, also with a tin can on his head, is lying under a tree covered with beer barrels that seems to have sprouted bottles and cork screws, much to the delight of the recumbent gent.  Apparently having access to both is a “double joy.”

The next two cards are, in effect, mirror images of each other.  Two figures, identifiable as German youths are featured on each, although in different colored garb.  Each is drinking from a large stein marked “Prosit,”  German for “Cheers!”  I am assuming that the button referred to in the text opens the spigot of a keg of beer.  Otherwise the accompanying verse makes little sense:  Dear Dutchy —
Gersundheit and Prosit is all you can say
A button is all you can push
With your Rhine and your Nein
And your nose in a Stein
In the shade of the Anheuser Busch 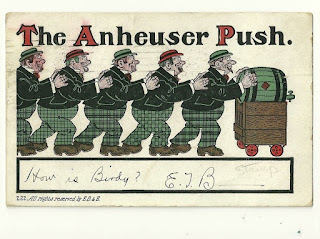 Yet another reference to Adolphus’ company, is a postcard showing five gentlemen, all wearing  porkpie hats, black coats, and a variety of checked pants energetically shoving forward a keg of beer with a spigot that it on wheeled wooden cart.  It is captioned “The Anheuser Push.”  While the title clearly is a play on words, the entire premise of what is intended here escapes me. 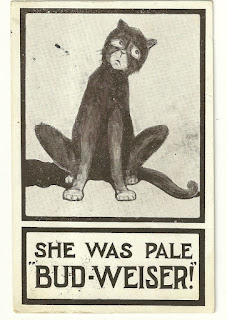 If Anheuser Busch was susceptible to puns so was the brewery’s principal brand, Budweiser. This card shows a scruffy black cat that clearly is experiencing a difficult situation or some dilemma. The caption here — “She was Pale ‘Bud-Weiser,’” — seems to be a variant on the theme “sadder but wiser” often used to refer to a young woman who ill-advisedly has engage in conduct with a young man that she now has reason to regret.  Perhaps our cat has been caught by a prowling male.

The names of other beers also could be used in pun fashion.  Among them was Schlitz beer of Milwaukee — a rival of Adolphus Busch and his Budweiser.  This card that combines the two.  Here a newsboy is ogling a very pretty young woman sitting at an outdoor cafe drinking a glass of wine.  She is wearing a dress that is slit on the side, showing ankle and calf.  The boy is intoning:  “Some like Budweiser but give me S’litz.” 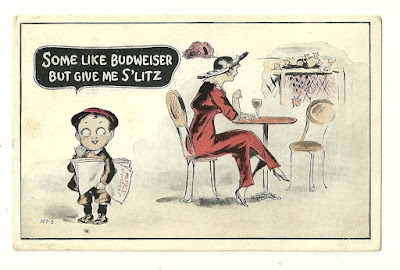 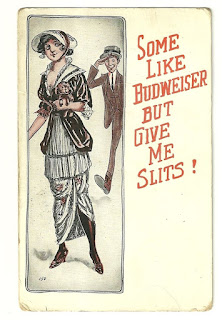 A similar message is found on a another postcard.  This time the lovely lass is standing and carrying a puppy.  Nevertheless, the slit on her dress is revealing a stocking-covered ankle and leg.  She is being followed by a vested young man with an eager look on his face, presumably taken by the sight of her shapely limbs.  The female here seems pleased with the attention.  Note that here “slits” is spelled correctly.

The notion of “Schlitz-Slits” could also offer more risqué interpretations, as demonstrated by the next two cards.  Each is a poem, the first a true five-line limerick.  In addition to ringing in Budweiser and Schlitz through their punning connotations,  it brings in a third beer,  Pabst, another Milwaukee product.  Here the sexual innuendo is more blatant than with the cat scene. 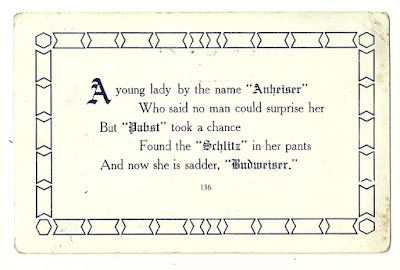 This juxtaposition of St. Louis and the Milwaukee beers puts me in mind of the 1953 Milwaukee brewery strike that one Schlitz executive declared did “irreparable harm” to the city’s beer industry.  During it, Anheuser Busch is said to have flooded Milwaukee with its Budweiser and gained many local patrons to the brand. 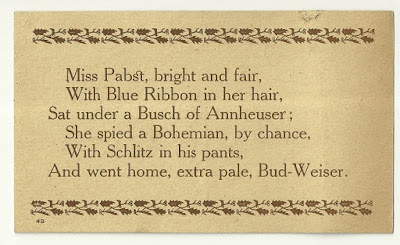 The next card presented a copy-cat verse, not a true limerick.  It spelled “Busch” right and “Anheuser” wrong.  The text referenced Pabst’s Blue Ribbon brand and brought in fourth beer, Bohemian, product of the National Bohemian Brewery of Baltimore, Maryland.  In this doggerel, however, it is not so clear whether the implication is about a real encounter or just a glance by “Miss Pabst” that caused her to go home “extra pale, Bud-Weiser.” 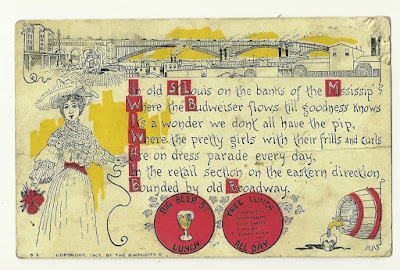 The last card gives us a young woman who is very chastely dressed and carrying a bouquet of roses.  This is a miss who would forego slits of any kind and never be “sadder but wiser.”  The accompanying verse celebrates the home town of Anheuser Busch:

In old St. Louis on the banks of the Mississip’,
Where the Budweiser flows till goodness knows,
Its a wonder we dont all have the pip,
Where the pretty girls with their frills and curls,
Are on parade every day,
In the retail section on the eastern direction,
Bounded by old Broadway.

“We don't all have the pip.” Who wrote this stuff?  The Simplicity Co. that published and copyrighted the postcard seem to have lacked editors.  At least the art work was above average.  I imagine if Adolphus had seen these items — most of them published in his day — he might have snorted rather than laughed.  At the same time he might have been secretly pleased that Anheuser Busch and Budweiser were so prominently mentioned.


Posted by Jack Sullivan at 5:45 AM No comments: 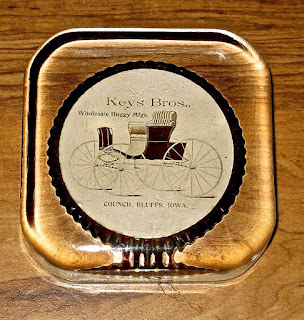 In one of my first posts on this blog in December, 2011, I featured a group of ten glass paperweights that memorialized buggy manufacturers, a once thriving industry in America that was destroyed by the coming of the automobile.  Although the post, entitled “Buggy Makers, Gone But Not Forgotten,” has been far from my most popular, I have continued over the years to collect other examples of this once ubiquitous mode of transport as captured under glass.
The first example is from Keys Brothers Wholesale Buggy Manufacturer from Council Bluffs, Iowa.   This firm was founded by the brothers, N. A, Keys, F. H. Keys and E.W. Keys.  They had been in the hardware business in Red Oak, Iowa, and became engaged in making buggies with a Red Oak firm.  After buying into the company the brothers were enticed about 1891 to transfer its operations to Council Bluffs by a subscription offer of that city’s Board of Trade. Keys Bros. manufactured buggies, spring wagons and carriages. 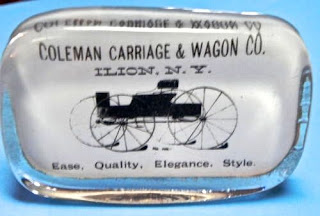 The Coleman Carriage & Wagon Co. was founded in Ilion, New York, by an immigrant English family led by Fred Coleman.  It employed a work force of some 36 men manufacturing horse-drawn vehicles, including sleighs, Coleman was reported to have won many first prizes when exhibiting at fairs and the National Carriage & Harness Dealers Assn. in New York.  The company advertised their manufactures as "Victorias, Landaus, Dog carts, Village carts, Ilion platform and spring wagons and other patent wagons."  Prices ranged ran from $50.00 to $1,000.00 with every vehicle said to be guaranteed.  Victorias, large buggies with cushioned seats fit for a queen, and landaus, high end convertible carriages, would have been closer to the latter figure. 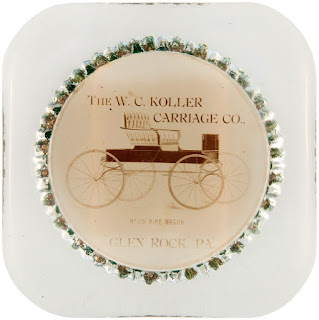 The W.C. Koller Carriage Co. of Glen Rock, Pennsylvania, sought a national market for its buggies, like the No. 119 Bike Wagon shown here.  The firm displayed its ware at the 1901 Pan-American Exposition in Buffalo.  The Koller firm showed six vehicles there, including two buggies, two canopy top surreys, a phaeton (a sporty open light carriage), and a depot wagon.  One observer of their exhibit noted:  “The styles are good, the lines being of the popular forms, the mechanical construction is of high grade, as is also the finish.”  He noted that Koller was one of the few makers to sell buggies right off their exhibit. 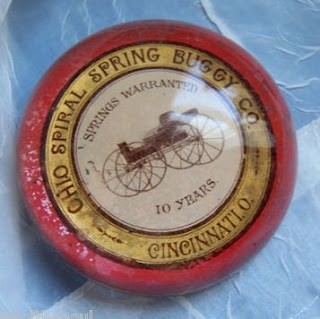 The Ohio Spiral Spring Buggy Co. of Cincinnati was also exhibited its wares at the Vehicle Division of the State Transport Department.  It was showing five buggies with tops, four phaetons, one cabriolet (two-wheeled, one-horse carriage that had two seats and a folding top), three surreys, a canopy top wagon and one “jump-seat” buggy, featuring a back seat that could be folded out of the way.  No indication of sales from these items. The firm guaranteed its springs for ten years. 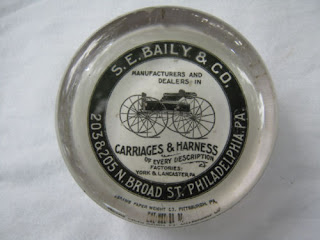 In 1908 a trade paper reported that S.E. Baily & Company of Philadelphia had received a contract from the New York City Fire Department to build twenty-two fire chief’s heavy buggies, equipped with rubber tires and a regulation fire gong.  This was a hefty order even for the Baily firm that operated factories in both York and Lancaster, Pennsylvania.  In its advertising the company claimed to make and deal in carriages and harnesses “of every description.” 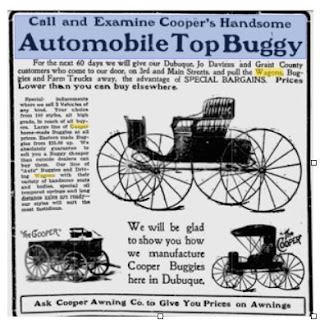 The Cooper Wagon Works of Dubuque, Iowa, was founded by Augustine A. Cooper, once an apprentice and blacksmith for local wagon makers Newman and Duffee. One month after finishing his apprenticeship in 1850 he bought out Duffee’s interest and the company became Newman and Cooper.  With Newman’s retirement for bad health in 1862, Cooper took full control of the enterprise. 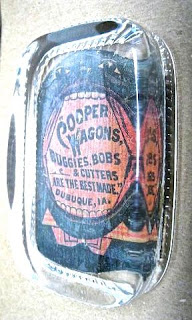 Under Cooper’s leadership, the firm expanded considerably. In 1875, when the factory was producing nearly three thousand wagons annually, ninety workmen were employed with the average monthly payroll being $4,000. By 1897 the company employed 300 men who worked thirteen to fourteen hour days to keep up with demand.  With continual expansion,  in 1910 the company employed about six hundred workers with an annual payroll of a quarter of a million dollars.  The Cooper paperweight is quite unusual.  It features a clown-like individual with a wide open mouth in which is written “Cooper Wagons, Buggies, Bobs & Cutters Are the Best Made.” This may not be just hype.  Cooper is said to have seasoned the wood for his wagons for no less than seven year. 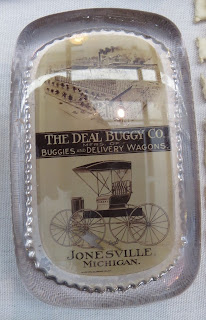 The Deal Buggy Co. not only displayed a buggy on its paperweight but also a picture of its factory in Jonesville, Michigan.  Jacob J. Deal was a blacksmith who moved to Jonesville to practice his craft.  About 1865 he decided that making buggies was a better idea, sold his shop, constructed buildings across the street, and began making wagons and carriages.  The initial factory with buggies on display atop a porch is shown below. 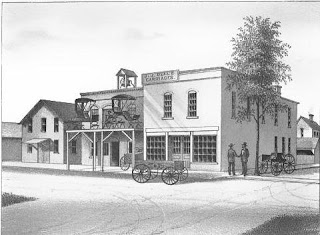 Taking his son into the company Jacob gradually expanded to the facility shown on the weight.   In 1908  the company, bowing to the inevitable, branched out into making motor cars, producing multiple models of the Deal Automobile.  Like other buggy manufacturer who tried to morph into the auto industry, the effort failed and the Deals went out of business in 1915. 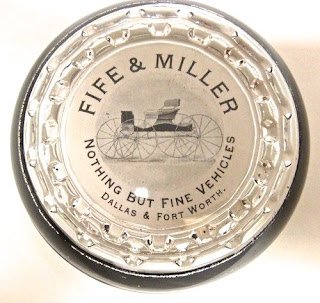 The final weight here is from the Fife & Miller of Dallas and Fort Worth, showing one of the buggies it sold.  This company was a dealer not a manufacturer, obtaining its vehicles largely from the Columbus Buggy Company.  Considered a “premier sales agency” for that Central Ohio manufacturer, Fife and Miller were sent the first three motor cars produced by Columbus Buggy for testing.  Called the “Firestone-Columbus,”  all three automobiles broke down in test runs after barely going ten miles.  The diagnosis:  they all had overheated in the Texas sun.  In 1913, after thirteen years as agents for Columbus Buggy,  Fife & Miller terminated business.  A. D. Fife had died earlier and Col. Dick Miller, the surviving partner, was reported to have gone on to other interests.

Many carriage companies advertised their products under glass as paperweights — many of them still to be found and collected.  These artifacts provide industrial history buffs in 2015 with a glimpse of the time when the horse drawn vehicle was in its heyday.


Posted by Jack Sullivan at 6:46 AM No comments: