Drinking and Flying: “Are You Kidding Me?”


This post begins with a personal story.  During the summer of 1957 while working on a Northern Wisconsin weekly newspaper, I was told by my boss to take aerial photos for a prominent resort owner of his place.  When I arrived the owner clearly was drunk but he proceeded to tell me how he would fly his Cessna sideways with me leaning out to take the shots.  When he picked up the phone to call the local airport, I figured on running away to join the circus.  Then he put down the receiver, explaining: “I never fly if I have been drinking.” The photos never got taken.

This incident caused me to follow up on my last post about “drinking and driving” as captured in pre-Prohibition beer advertising.  It is evident beer and liquor interests have also linked drinking and flying in their merchandising — not only in the early days of flight but even more recently.

Wilbur and Orville Wright flew the first airplane in 1903 at Kitty Hawk and it quickly sparked many innovation so that by 1914 the first commercial passenger service was established.  Beer manufacturer were quick to seize on public interest in flying as an advertising gimmick. 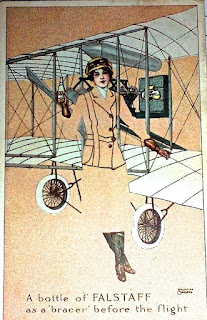 Falstaff Brewery appears to have embraced the idea of advertising its beer with flying early on.  It issued a postcard that showed a comely young woman, an early aviatrix, holding a bottle of beer.  The caption is very clear about the purpose:  “A bottle of Falstaff as a ‘bracer’ before the flight.”  The message was “drink before flying.” 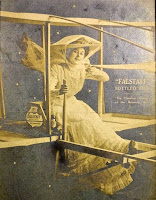 The brewery returned to this theme by issuing a trade card showing a Gibson girl sitting in something that looks vaguely like an airplane.  She is quaffing a glass of Falstaff poured from a bottle beside her.  Her seat bears the brewery logo.  Women had begun participating in aviation about 1910.  The first woman to be given a flying license was a French baroness.  Shown here is Lillian Todd, an early flyer and the first female aeronautical engineer.  Ms. Todd had designed the plane she is posing on.  She is not known to have had a beer before taking off. 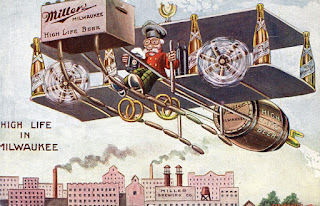 The Miller Brewing Company also saw the benefit of advertising via the airplane.  Theirs is a cartoon.  The pilot, a little old man, is drinking from a stein while surrounded by large bottles of Miller High Life Beer.  He is said to be experiencing the “High Life in Milwaukee.”  The pilot may never be able to land; his struts are actually sausages.

Charles Lindbergh’s flight from New York to Paris in May 1927 had made him a national hero.  His popularity extended beyond the repeal of National Prohibition in 1934 prompting Haffenreffer and Company to use his image and associated message to promote its Pickwick Ale and Stout.  According to the ad, Pickwick has experienced a “flight of popularity.”  The public is assured: “And you will have no fears for safety when you’re navigating with Pickwick.”  Maybe, but I suspect that if “Lucky Lindy” had been navigating with a few drinks in him he might have landed in Chicago.

Fast forward to more recent times.  An ad from Guiness shows its toucan mascots flying over a military airfield with glasses of stout balanced on their ample beaks.  Two military chaps are looking at them and while clearly startled seem to be thinking, “Lovely day for a Guiness” just before they take off into that “wild blue yonder.” 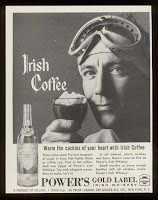 Powers Gold Label Irish Whiskey seems to be conveying a similar message, showing a man dressed for flying who is drinking an Irish coffee made with Powers.  The drink is said to “Warm the cockles of your heart….”   It also may warm up other bodily organs, some of which are better left cool in flying.

The illustration here of a stewardess holding an Foynes Irish Coffee in front of a airplane needs some explanation.  As one author has put it, “Foynes and flying boats will be forever connected with the Irish coffee.”  Foynes was an airbase near Limerick and the main airport for flying boats — fixed wing planes that landed on water — traveling between Europe and the United States.  Weather conditions along the West coast of Ireland can be notoriously bad, and after taking off for New York, on one occasion the pilot had to return to Foynes.  To warm up the passengers an airport restaurant brewed some coffee, added some Irish whiskey and brown sugar, topped it off with whipped cream — and the rest is history. 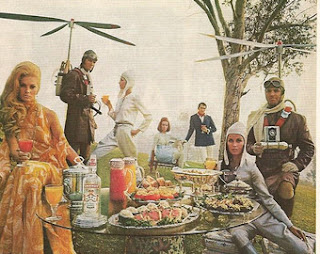 The last example of linking strong drink and flying appeared in a Smirnoff Vodka ad in 1969.  It features a group of picnickers who are drinking the potato alcohol,  two of them equipped with helicopter backpacks.  Two women also seem dressed for flight.  The caption should have been:  “Don’t try this at home.” 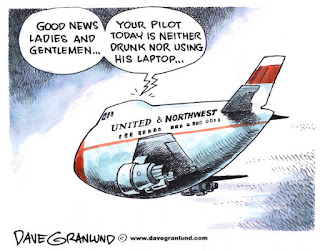 The last illustration is a cartoon that indicates my close scrape with a potentially drunken pilot narrated above was not so far-fetched.  Back in 1990, all three members of a Northwest Airlines flight crew were legally intoxicated when they flew 91 passengers from Fargo, North Dakota, to Minneapolis, Minnesota, roughly an hour-long flight whose landing came without incident. Authorities had received a tip from someone who had seen them drinking in a bar the previous evening. The three served prison sentences.

I escaped making a decision to bolt if the inebriated resort owner had actually order up his airplane.  The passengers on that Northwest flight probably never knew — until they read of the arrests in the paper the next day.  All of us were lucky but luck should be nothing to count on when flying.

Posted by Jack Sullivan at 5:48 AM No comments:

When Drinking and Driving Was Cool 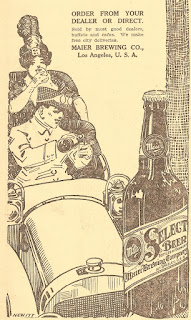 Today the American public is warned on countless fronts about the dangers of  “drinking and driving”   Magazines, newspapers, radio, TV and billboards all carry that message.  Not so in the pre-Prohibition era when the automobile was a new invention.  Shown here are examples of vintage advertising that clearly seem to be fostering drinking and driving.

The first example is the ad above left from the Maier Brewing Company of Los Angeles.  It shows a “grande dame” with a large feathered hat downing a glass of beer.   Even more her liveried chauffeur also is pouring himself a snort.  Their automobile has no windshield and as a result both are wearing goggles. Note that the steering wheel also is missing.  This beer-maker has been described in the press of its time as “one of the oldest and best appointed brewery establishments on the Pacific Coast, and one that it has made itself and its superior products famous….”   The company sold its beer in Western states and even exported abroad. 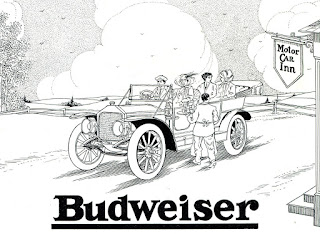 Windshields had come along — but true headlights had not — by the time Anheuser-Busch of St. Louis issued this ad for Budweiser.  It shows two couples out for a ride in their motor sedan.  Here there is a steering wheel, but it is positioned on the right  — it took the industry a while to straighten out that detail.  The two men and two women have stopped at the “Motor Car Inn,”  obviously a trendy place, for refreshment.   They are getting “curbside” service from a waiter who has four bottles of Bud and glasses on a tray.   With its drive-through daiquiri shops, Louisiana is about the only place left in America where one can get alcohol served to the car. 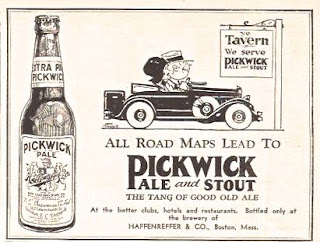 Pickwick Beer issued an ad featuring a jaunty look gent and his flapper companion heading in their fancy roadster toward a drinking establishment called “Ye Tavern,”  that — no surprise — served Pickwick ale and stout.  The couple look very keen on sampling “the tang of good old ale.” These brands were the product of Rudolf F. Haffenreffer, described as a Rhode Island industrialist and Massachusetts brewer, who called two of his beer brands “Pickwick Pale” and “Pickwick Stout,”  presumably after the character in Dickens novel. 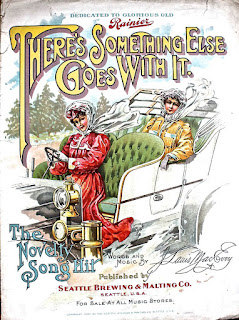 Perhaps the most provocative of the “driving and drinking” promotions was a “novelty song hit” called “There’s Something Else Goes With It” and showing two comely young ladies, out for a ride and scarves blowing in the wind —no shield here.  What clearly goes with joy riding is “glorious old” Rainier Beer, the product of the Seattle Brewing & Malting Company.  The chorus, written by an obscure songwriter named J. Louis MacEvoy, tells us so: 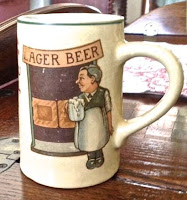 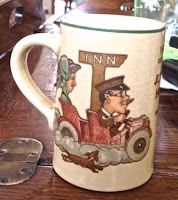 The next motoring and suds scene comes on a beer stein issued by Milwaukee’s Juneau Hotel in 1914.   Like the Maier ad earlier, a woman is being chauffeured.  This one is rather prim looking and the driver intent on reaching the destination, which is — a saloon.  A waiter is right outside waiting with a large foaming stein under a sign that proclaims “Lager Beer.”  The Juneau Hotel was located at 229 Wisconsin Ave in the heart of downtown.  Originally an apartment house it had been turned into a hotel in 1910 by Eugene Trimberger.  In 1919 he established a restaurant on the site called Eugene’s.  Known for its seafood, Eugene’s was a favor of mine when I lived in Milwaukee. 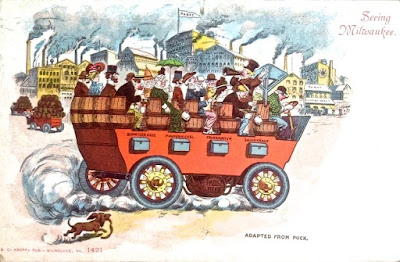 That city was famous for touting its beer heritage, once the center of brewing in America but, sadly, no longer.  This post card, entitled “Seeing Milwaukee,” boosted Pabst Beer.  The barrel between the wheels and the banner that waves atop proclaims the name. The drinking here seems to be confined to the tourists aboard a bus whose seats are made from beer barrels.  Several passengers can be seen imbibing.  The boxes along the side are clever in indicating favored Milwaukee German food items — sauerkraut, frankfurter, pumpernickel, and schwitzerkase (swiss cheese). 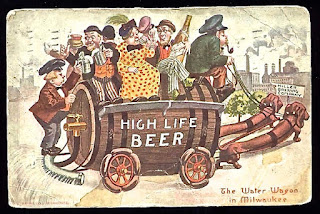 Not to be outdone, the Miller Brewing Company had its own postcard, entitled “The Water Wagon in Milwaukee.”  Have included it although the source of locomotion is not a gasoline engine but two dachshunds. There is enough drinking going on among all those hanging on to make this a risky situation.

The final example of pre-prohibition “drinking and driving” comes from a postcard with no attribution on it but similar to those that feature the Milwaukee skyline.  Here the Germanic-appearing driver has in hand a vehicle whose engine is in a beer barrel, with two open steins as headlamps, and a third stein at hand should the dust he is stirring up make him dry.

The juxtaposition of the automobile and beer drinking ended with National Prohibition in when the Nation’s breweries either closed or were reduced to providing non-alcoholic beverages.  After repeal, the ubiquitous nature of the automobile and the frequency of drunken driving discouraged a repeat of these varieties of beer ads.  Today, of course, such images would be utterly unthinkable.

Note:  In my next post I will concentrate on beer and liquor ads that juxtapose drinking and flying, a prospect even more terrifying than drinking and driving.


Posted by Jack Sullivan at 6:19 AM No comments: