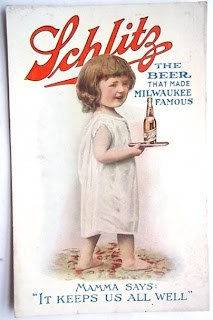 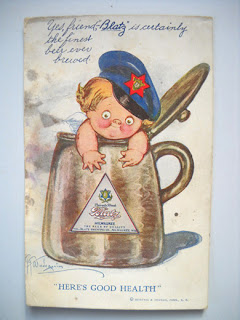 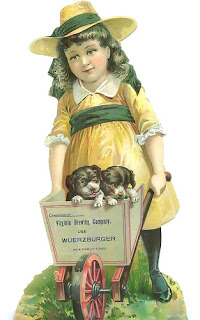 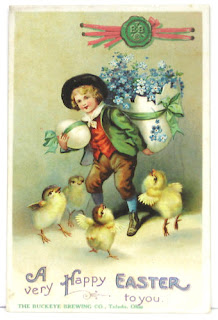 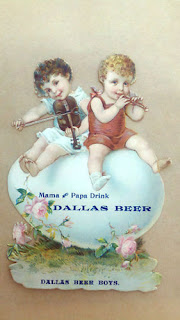 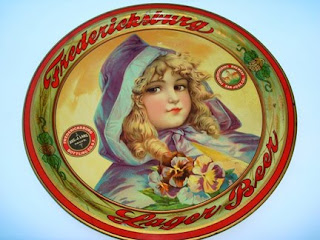 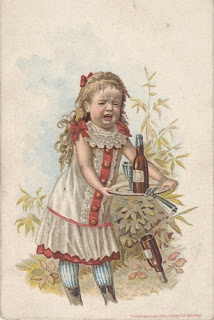 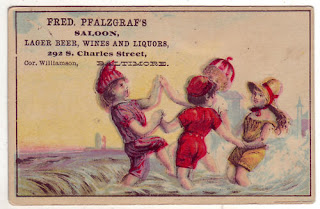 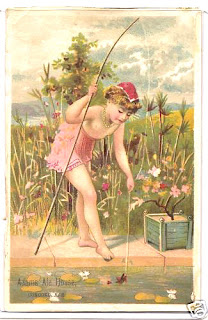 This post continues my series of images of children employed to advertise unlikely products. In March 2010 I dealt with kids selling whiskey and in October 2010, tobacco. This time the subject is beer.

Although the product being merchandised is different, the rationale behind the use of childhood innocence is the same: The attraction of consumers to a picture of a winsome youngster or two. All the illustrations shown here are pre-Prohibition, i.e., pre-1920. After Repeal in 1934 American mores had changed to the point where no brewery would have felt comfortable using children in advertising. (The Japanese still do.)

A theme that runs through many of these ads touts beer as a health food, safe even for children. Note the Schlitz ad. It shows a tyke of about 5 or 6, carrying a bottle of beer on a tray. In addition to its well-recognized mantra that Schlitz is “The beer that made Milwaukee famous,” the trade card states: “Mama says: It keeps us all well.” The clear inference is that this kid not only serves the beer but drinks it.

Schlitz cross-town Milwaukee rival, Blatz, similarly was pushing the health button. Its trade card features a cartoon tot, popping from a stein and chirping “Here’s good health.” Is the assumption that he has been imbibing in the flagon? The ad also assures us that “Blatz is certainly the finest beer ever brewed.”

The Virginia Brewing Company not only gives us a winsome little lady, but piles on the cute and cuddly by having her push a wheelbarrow holding two puppies. Virginia Brewing was a major beer-making operation, founded in Roanoke VA in 1890. Its Wurzburger Beer was touted as “a family tonic,” again an indication that it could be given to children. The company was shut down by state prohibition in 1916, reopened upon Repeal, struggled, and finally closed in the 1950s.

Vying for the “cute” title is a 1910 Easter greeting card from Buckeye Beer, located in my home town of Toledo, Ohio. If two puppies are fetching, how about four baby chicks surrounding a curly headed urchin? The flip side assured the reader that by drinking two pint bottles of Buckeye beer each day, “you will remain strictly temperate....” Buckeye traced its origins back to 1838. In 1886 the Buckeye name was adopted. The brewery survived Prohibition, for a time produced my favorite home town brew, and then in 1972 went out of business.

The Dallas Beer boys, shown with violin and flute, is more subtle. It has no health claims attached, just that “Mama and Papa” drink it. Demonstrating the value of some of these brewery ephemera to collectors, this card sold his year on eBay for $370. Even more pricey was the winsome, golden haired lassie on a tip tray issued by the Fredericksburg Brewery of San Jose, California. The tray recently sold at auction for $1,000. Founded in 1867 brewery survived until 1918 when closed by Prohibition.

Not all the children are having a good time with their beer. Christian Moerlein of Cincinnati, who often favored hordes of cherubs in his ads, shows a young lady who will never grow up to be a waitress. She has dropped one bottle of Moerlein beer and a glass to the floor and seems in danger of losing a second. Moerlein began by brewing beer in the back of his blacksmith’s shop during the 1840’s and saw the business become one of the Midwest’s largest. Under different ownership, the brand is still sold today.

Not only breweries exploited childhood images as a merchandising gimmick, local saloons did as well. Fred Pfalzgraf featured this trade card of a quartet of juveniles romping amidst the waves, apparently in Baltimore harbor. Just why two of them are wearing stocking caps in the surf is not apparent.

The final image in this series of kids selling beer is perhaps the most perplexing. It shows a scantily clad, evidently post-pubescent young girl fishing in a pond with what appears to be a butterfly for bait. It is an ad for the Adams Ale House of Concord, New Hampshire. Unfortunately one must assume that all involved in creating and distributing this image have long since left mortal life. Otherwise a question: “What exactly were you thinking of?”
Posted by Jack Sullivan at 5:56 AM No comments: 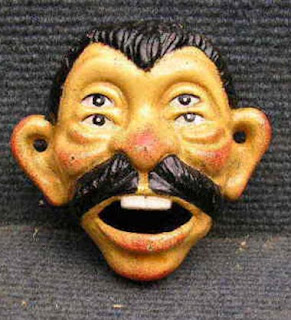 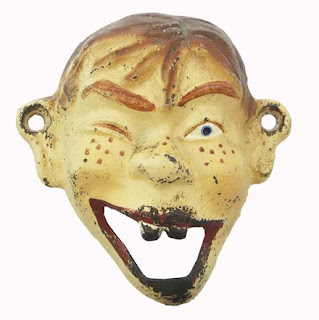 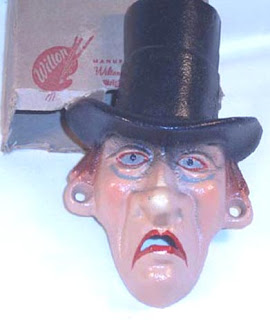 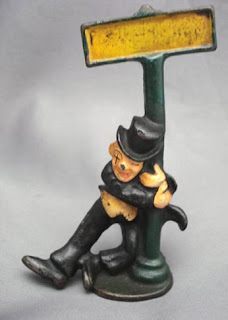 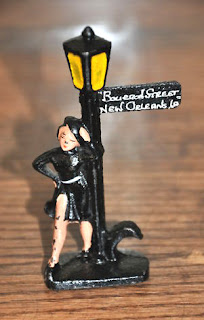 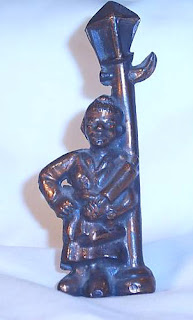 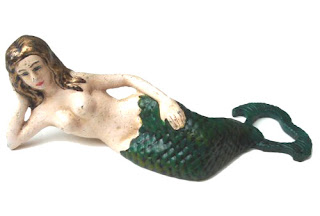 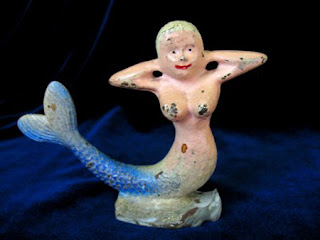 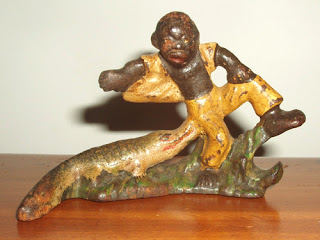 American vernacular art, according to experts Frank Maresca and Roger Ricco, often has a utilitarian purpose or origin that serves as a springboard for individual imaginations. Their book, American Vernacular: New Discoveries in Folk, Self-Taught and Outsider Sculpture,
includes a number of machine-made objects in order to drive home that point.

In that vein I have been fascinated by the variety and creativity embodied in cast iron bottle openers. They are far from being antiques. Most were manufactured in the ‘40s, ‘50s and ‘60s. Although the openers were cast from standardized molds, they were hand-painted by workers who often gave them individualized “personalities.”

The first group of castings shown here depict openers that were meant to be attached by nails or screws through holes in the ears to a wooden shelf or other surface. Maresca and Ricco mark the particular importance of sculptured faces in a contemporary times when most facial representations are two-dimension photographs. They believe three dimensional visages provide an important “presence” that photos cannot.

That may be the reason why the three faces shown here are so compelling. The four-eyed man, for example, shows up in a number of shapes and sizes with his teeth the hook for bottle caps. Seeing double he is a warning against overindulgence in alcohol. The Goofus face, another popular bottle opener, by contrast seems to be encouraging us with a wink to “let the good times roll.”

The top-hatted man with the sour look generally is known as “Mr. Dry” and comes in a variety of shapes, sizes and coloration. He is a Prohibitionist advocate and his frown greets anyone uncapping a beer bottle on his face. While the origins of many of these cast iron objects are unknown, “Mr. Dry” was created by Wilton Products, Inc., of Wrightsville, Pennsylvania.

The Wilton family began casting metal along the Susquehanna River in 1893. It was not until about 1935, however, that the company, presided over by a Wilton heir, began producing hand-painted cast iron objects, including bottle openers, trivets, candle holders and a wide variety of novelty items. These were most popular during and after World War Two.

Another popular sculptured opener is a figure at a sign and/or lamp post. Often he is a drunk as indicated by his posture -- clinging to the post for dear life -- and an “x” over his eye. Less common is an item depicting a New Orleans hooker, provocatively showing a suggestive amount of ankle and thigh. The woman with the rolling pin obviously is waiting for her drunken husband to show up. Note that the hook of the opener is located at various points on the posts.

Mermaids are another popular cast iron format. Two are shown here but the variety is substantial. My hunch is that mermaids give an excuse for crafting a figure with bare breasts. After all it is largely men who are looking for a way to pop the top on their brewskies.

The black boy with the alligator nipping at his pants also comes in several variations. This bottle opener has an action quality that makes it particularly appealing. Using the Maresca/Ricco criteria, this object, like others shown here, would qualify as a vernacular American art. Moreover, all are eminently collectible at reasonable prices.

As can be seen on several of the openers shown here the original paint over time and with wear often tends to flake off, leaving the bare metal below. In fact, if an casting is too perfect in its appearance, it may be a reproduction or a repainted item. In the case of American vernacular, a la Maresca and Ricco, some damage or flaws would seem to enhance the artistic value.
Posted by Jack Sullivan at 12:46 PM 7 comments: