Harvey F. Crawford and His Shoes Under Glass 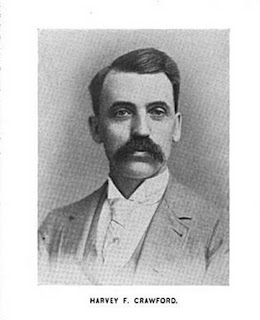 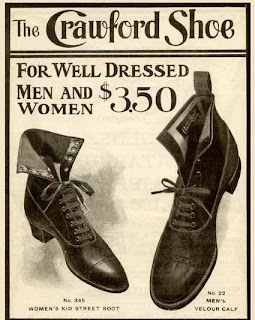 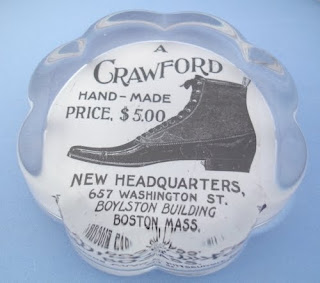 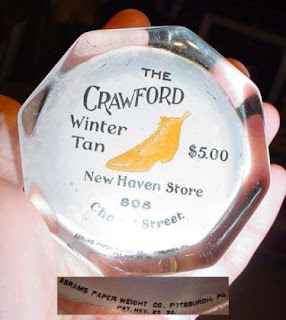 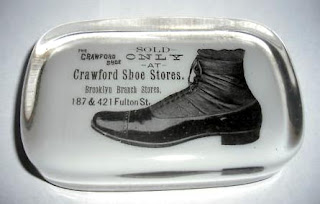 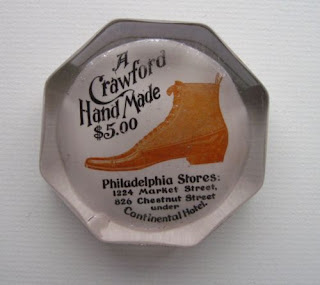 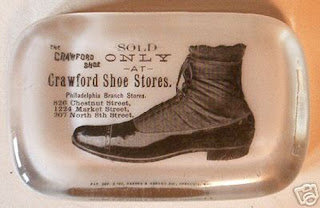 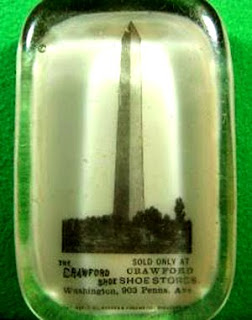 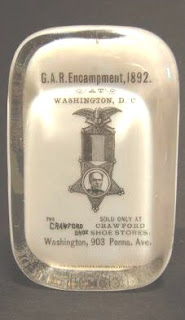 For reasons I have yet to fathom, certain businesses commonly provided glass paperweights to advertise their products or services. Among them were funeral homes, steamship lines and distillers. But perhaps the most frequently seen are from shoe companies. The epitome of this phenomenon was the Crawford Shoe Company.

This observation sends us to a hard luck but persistent and far-sighted entrepreneur named Harvey F. Crawford. Born in Maine, about 1881 Crawford emigrated to Brockton, Mass., as a young man where he was determined to succeed in the shoe business. His picture shows him with a shock of black hair, a large walrus mustache, and piercing dark eyes.

He created his first shoe manufacturing company with $25. It soon failed. Undeterred Crawford began again. This time his factory burned down. He started over yet a third time, but in 1886 was forced to declare bankruptcy when a local bank failed taking his cash reserves with it.

In 1887, with a deep-pockets new partner funding the enterprise, Crawford launched a fourth shoe company with an outlandish retailing idea. He would open proprietary shoe stores in good locations in large Eastern cities to merchandise the products of his Brockton factory. He also would sell cheap (shoes for $3.50 and $5.00) and advertise heavily in popular magazines of the day. Said a 1902 biography of Crawford: Many of his friends tried to dissuade him from what they deemed certain failure.”

As it turned out, Harvey was the Sam Walton of his day. Over a period of 15 years he opened stores in Boston, New York, Philadelphia, Baltimore, New Haven, and Washington. Their success allowed Crawford to open a second shoe factory in New York City. Within a decade he could boast 30 outlets in major Eastern cities.

Another of Harvey’s inspirations was an emphasis on customer giveaways. He favored paperweights. Shown here are an array of weights from a number of Crawford’s outlets in major cities. They demonstrate an array of vintage shoe styles. Several added color to the image.

For his Washington, D.C. retail outlet Harvey abandoned the shoe motif to issue paperweights depicting the Washington monument and the G.A.R.. Encampment of 1892 in the Nation’s Capitol. A thriving veterans organization of former Northern soldiers and sailors, the G.A.R. was a highly potent political force during the post-Çivil War era. A feature of its national conventions were commemorative medals sold to participants. Crawford replicated one on a paperweight.

Among the dignitaries attending the 1892 encampment was Rutherford B. Hayes, a former president of the United States (1877-1881) and a Union army officer during the Civil War. From Hayes we have a narrative of what happen in Washington during the G.A.R. national event. Hayes marched shoulder to shoulder with the rank and file as the “great parade” of veterans surged down Pennsylvania Avenue to great crowd applause. “Nothing of the sort could have been better than the demonstration on Fifteenth Street -- Treasury on one side, Riggs House on the other....It was enough to stir the blood of the coldest and the oldest,” Hayes recorded in his daily journal. He did not mention parading by Crawford’s shoe store at 9th and Pennsylvania.

Crawford’s prosperity did not last long. Creative but not particularly good at managing a business, after 1902 he was forced to sell out to other interests. The company eventually was owned by Charles A. Eaton, who raised prices and tried for a classier shoe image by featuring a huntsman with his dog.

As for Crawford, after retiring from the shoe business he was associated with the Crawford Manufacturing Co., making the Crawford rigid steel shoe shank. He also patented inventions in shoe manufacturing and appliances and was recognized widely in Brockton as a leader in local business development. After a long illness, Crawford died in his Brockton home, age 70.

Part of Harvey Crawford’s legacy is a wealth of glass paperweights to remind us of the footwear styles of yesteryear. The weights also memorialize the creativity of a entrepreneur who declined to let three failures at retailing shoes deter him from a fourth, spectacularly successful, enterprise.
Posted by Jack Sullivan at 6:43 AM No comments:

Pantin Paperweights: Snakes in the Glass 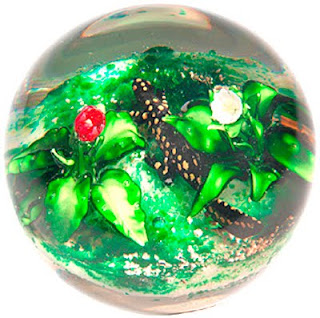 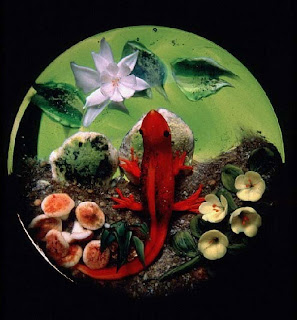 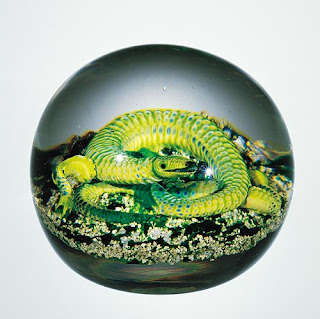 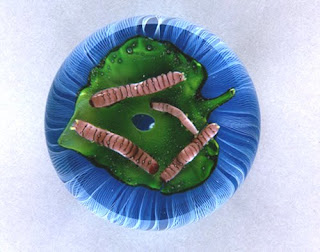 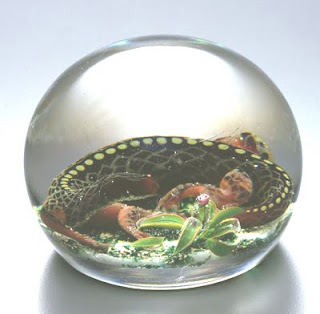 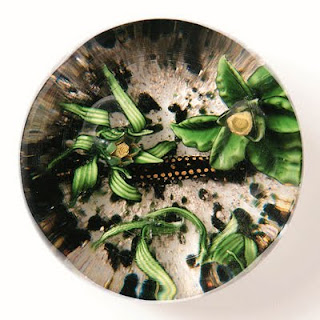 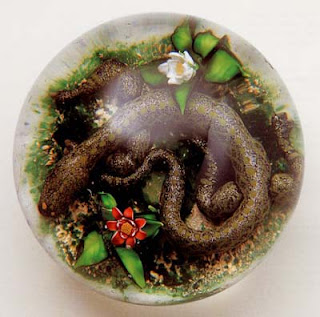 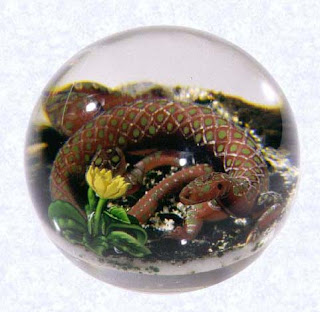 My fascination with snakes and other reptiles in ceramic also translates into glass, in this case glass paperweights. The most famous and rare of these were produced in France in the middle of the 19th Century by a company generally known as “Pantin.” According to sources fewer than 20 of these snake, salamander and worm paperweights are known. From a range of Internet sources I have gathered eight Pantin weights to show here.

Little is known about the Pantin factory and what information is available often is partial and even conflicting. One account goes like this: The Cristallerie de Pantin was founded by E. S. Monot at LaVillette, France, in 1850. It moved to Pantin, near Paris, in 1855. The company manufactured glass tubes and other chemical glass, crystal drinking vessels, and chandeliers. None of the weights Pantin produced were signed or dated. Evidence of Pantin paperweight making is in printed materials from the Paris Universal Exposition of 1878. American delegate Charles Colne described the snakes, lizards, fruits, and millefiori that amazed him in their skilled craftsmanship. The company continued until 1915, when it merged with Legras & Cie to form Verreries et Cristalleries de St. Denis et Pantin.

The artists who produced these weight overcame the risks involved in representing delicate and detailed animals in molten crystal, while preserving the fine quality of the lampworking. Frequently the bodies were wheel-cut to simulate scales. The legs and other details were added. It is suggested that one reason salamanders are a frequent Pantin motif is that they were thought to be able to survive fire unharmed. As such, it is said, they were long revered by glassmakers.

In 2010, A Pantin weight sold for $65,370, more than double its estimate. Shown here, it is just over 4 inches in diameter and shows a yellowish orange spotted black salamander clambering across green leaves with red and white flowers, all set on an opaque white ground mottled with moss and buff-coloured sand. Beautiful, indeed, but a pricey piece of glass.

The red salamander weight that follows is another prize. It was part of the Henry Melville Fuller collection of paperweights given to the Currier Museum of Art in Manchester, New Hampshire in 1999. Said Mr. Fuller: "One of my favorite weights from this period was made by Pantin, a factory near Paris. The paperweight is somewhat unusual...lizards and snakes being a favorite subject of the Pantin artists. But these weights are very scarce, for the factory was only in business for a short time."

Most known Pantin weights can be found in museum collections. The next item, featuring a green snake, is from the collection of the Corning Museum of Glass in Corning, New York. In 1978 that institution brought together 13 examples in a special exhibit, believed to be the largest assemblage ever made of Pantin weights. The Chicago Art Institute has in its collection a Pantin weight that features three silkworms on a mulberry leaf. I am uncertain of the provenance of the last four weights shown here.

For $65,000, one of these Pantin weights might be purchased to be held in the hand. As the next best thing, this post offers up this array of eight for viewing, each offering its own “eye candy.” And they are presented here free of charge.
Posted by Jack Sullivan at 4:32 PM 6 comments: