Tete-a-Tetes with Chiefs of States

After more than a half century living and working in and around the Nation’s Capital, I have had an opportunity to meet a number of Chiefs of State.  The years have brought perfunctory handshakes with three American presidents (Kennedy, Johnson and Carter) as well as with foreign leaders like Tito of Yugoslavia, Marcos of the Philippines, Suharto of Indonesia, and Nguyen Van Thieu of Vietnam.  They do not bestow the same quality of remembrance as do up close and personal encounters with leaders of counties — as recalled here.

From 1976 until 1981 I served in the Carter Administration as the Assistant Administrator responsible for all the Agency for International Development programs from the Khyber Pass to Hawaii.  This brought me in contact with Asian leaders, often a context of negotiating agreements on development programs.  Upon occasion those discussions would involve a Chief of State.  Here are stories of three such encounters. 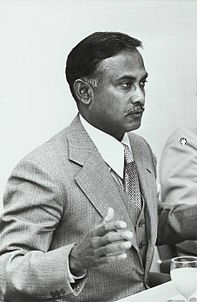 My first venture into a presidential office was in Bangladesh in 1978.  I went alone to meet Ziaur Rahman, a major figure in the country’s independence from Pakistan who was considered a reformer. He had fostered multi-party politics, freedom of the press, free speech and free markets. He had initiated large agricultural efforts and initiated social programs.  The U.S. was assisting him by massive shipments of food that could be given away or sold to provide funds for government services.

Even before I took office, those shipments had become a problem.  Critics were showing photographs of American “Food for Peace” grain piling up on Bangladeshi docks or in makeshift earthen “warehouses” where rats were feasting.  At the same time, however, some USAID personnel were telling me that there was insufficient food stockpiled and a danger that famine might return to the country.  Reaching the correct balance in supplies was critical — and my responsibility. 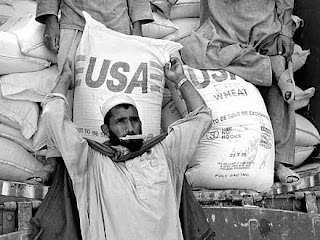 That day, however, I was to speak to President Zia about reducing the amount of food on the idea that such imports discouraged domestic production of grains, something Zia was himself interested in doing. It was just the two of us in his modest office.  He was very patient about hearing me out and the said very quietly, “Mr. Sullivan, if food shortages occur the rioters will not be coming to hang you, they will be coming for me.”  Internally I had to agree and left without further argument.

On my way out in the parking lot I noticed the Volkswagon Beetle that Zia famously drove to work in by himself — no chauffeur — and marveled that a man who already had had a dozen coup attempts aimed at him could move about with so little security.  His luck ran out in 1981 when he was assassinated by disgruntled Army officers.  Bangladesh lost a marvelous leader. 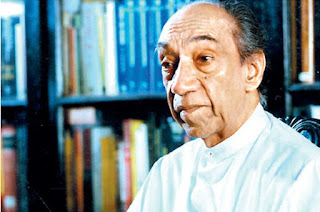 My next adventure with a Chief of State was in Sri Lanka. For reason I still have never figured out, one or two scientists at the Smithsonian Institution in 1979 had decided that Sri Lanka was not doing well by its elephants and, through higher ups in the Agency, insisted that I meet personally with President J. R. Jayewardene, shown right, to discuss the problem.  I had been in Sri Lanka before and had no experience of those noble animals being abused.

Regardless of my personal misgivings, I asked for an interview and Jayewardene granted one on a Sunday at his home.   After a life in political activism he had become president of the country in his 70s and was noted as a “tough old bird.”  Nevertheless, he was very gracious as he ushered me onto a comfortable couch in his library and offered tea.   He was alone except for servants.  I explained why I was there and the concerns of my fellow Americans. 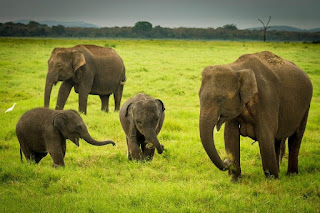 After hearing me out, almost lounging in his chair, Jayewardene responded:  “I am the biggest environmentalist in Sri Lanka and the greatest protector of the elephants.  Where a railroad crosses a well-used elephant trail, we build a trestle so that the elephants can cross underneath.”  I had seen and photographed just such a structure.  He followed up:  “Do you do that for wildlife in your country?”  I gulped hard and had to admit — no — and left shortly after.

In 1978 the Carter Administration had decided to re-establish an aid program to India that had been cut off at the time of the Bangladesh War.  A skeptical Congress decreed that the Indians first would have to ask for aid.  An equally skeptical Indian government thought the U.S. formally should offer it first.  How to break this dilemma?  One dark and rainy night in 1978 the USAID Administrator, John Gilligan,  and I went to the residence of Prime Minister Moraji Desai in hopes of a breakthrough. 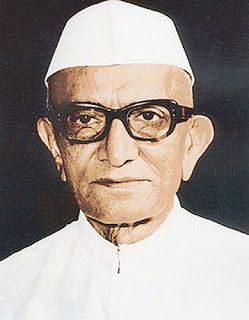 Greeted by Desai’s aides, we were strictly advised that our meeting could go on for no longer than 15 minutes and that we would be timed to the second.  Desai arrived alone.  The early conversation between Gilligan and the prime minister was theological, comparing Hindu religious thought with Christianity.  Five minutes went by along those lines — and then another five.   I could feel the cold sweat beginning to run down my sides.  Transmigration of souls was dominating  the dialogue as both participants seemed to be warming to the subject even more intensely.  A voice inside my head began shouting:  “Time, time, time” as more minutes slipped by and we had yet to begin the real discussion.

Barely a minute remained when Gilligan broke off the theological discourse and asked abruptly:  “If the United States were to offer foreign assistance, would you be willing to take it.”  In an Zen-like response,  Desai replied, “If we were willing to take it, would you offer it?”  There ensued barely perceptible affirmative nods on both sides.   Satisfied that the Gordian Knot had been cut,  Gilligan immediately stood up,  shook Desai’s hand, told him we would meet with his top government officials the next day to hammer out details, and we left.  Fifteen seconds remained.  We did not look back.

If lessons can be taken from these three interactions with Chiefs of State, it is that they are meetings of high intensity for the visitor whose outcomes can never be accurately predicted beforehand.  One inevitably leaves relieved that the encounter is over — but with memories for a lifetime.

Posted by Jack Sullivan at 6:06 AM No comments:

Rise and Fall of Back-of-the-Bar Bottles

While never owning any, I have been fascinated by back-of-the bar bottles (BoBB), the line of fancy containers shown above.  Gifted by distillers and liquor wholesalers in the pre-Prohibition era to favored customers like saloons and restaurants, the bottles were among the most expensive giveaways, often featuring fine glass and gold accents.  They were expected to catch the eye of the patron  — and did.  Because the legislation that accompanied the rollback of Prohibition outlawed them, today most of these bottles are more than 100 years old.  Displaying well, they are eagerly are sought by collectors.

A good example of the value these bottles have achieved is the the one shown right.  It was issued by Julius Goldbaum, a pioneer whiskey man in Tucson, Arizona.   Although most such bottles are clear glass,  Goldbaum chose his in amber with white and gold accents.  The results are a stunning bottle of which only a few are known.  One recently sold at auction for over $22,000. 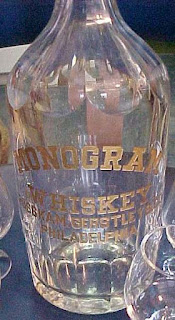 In featuring back-of-the-bottles, it occurred to me to feature one wholesale house that stood out for the variety of attractive items it issued — Rosskam, Gerstley & Co.  Isaac Rosskam and his wife’s kinsman, Henry Gerstley, both immigrants from Germany,  had settled in Philadelphia and in 1869 opened the doors of their establishment.  The company initially was located at 336 North Third Street but within a year had moved to larger quarters at 402 North Third, where it would stay until 1876.”  Their proprietary brands were “Old Saratoga,” “Monogram," and “Fine Old Whiskey.”

Reflecting the rapid and impressive growth of its business volume, the partners that year moved to two new buildings.  One was five stories at 226 S. Front Street that advertised “Rye & Bourbon Whiskies” on the storefront.  The other at 133-135 Dock Street of six stories proclaimed “Old Rye Whiskies.”  Both locations allowed the firm adequate space to undertake “rectifying,” that is, blending whiskey bought from multiple sources to achieve tastes determined to have broad public appeal. 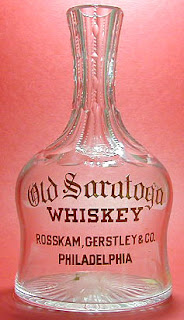 As their business grew the partners branched out into other cities. In 1870 the partners opened an office in Cleveland at 100 River Street.  About 1882 they located an outlet  in Chicago at 79 Dearborn Avenue, one of the Windy City’s premier commercial locations.  That was followed a year later by their establishing a branch  at 38 Broadway in New York City.   This proliferation of outlets indicated the kind of vigorous national customer base Rosskam, Gerstley built over time.

Because Philadelphia, and indeed the U.S., was loaded with distillers, rectifiers, and wholesalers, the partners had to combat stiff competition for the business of  restaurants, bars and saloons to stock their liquor.  They also had to appeal to members of the drinking public to request their brands from bartenders.  One way of advertising was to provide giveaway items that contained the name of a Rosskam, Gerstley products.  Although the partners gave away tip trays and shot glasses, they specialized in elegant back-of-the-bar bottles.

These included bottles in fancy molded glass with stoppers,ornate gold lettering, and in one case a metal or pewter body.  Shapes varied from bulbous bases to ginger jar shapes to straight sided bottles. At least one was metal.  Lettering might be in script, squared-off letters or san serif, and colored black, gold or cobalt blue.  I have counted at least twenty-one varieties of Rosskam, Gerstley & Co. bar bottles.  Nine of them are illustrated throughout this post.  No other distiller or whiskey house comes close in number or variety.  Isaac and Henry were the kings of the back bar.

At the turn of the Century, things changed at thePhiladelphia liquor house.  In 1899, Henry Gerstley died at age 61 at his residence.  As Rosskam aged he turned over the reins of management to his son.  A 1900 Philadelphia business directory lists William Rosskam as president of the firm.   In 1904 Isaac died, age about 70.  According to the press, he left a large estate.  Although the company continued to prosper for a time under William,  eventually it was forced to shut down by the enactment of National Prohibition. 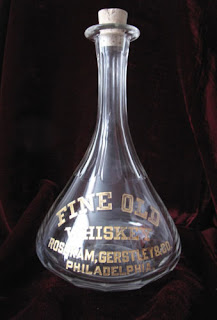 The banning of bar bottles after the end of Prohibition was the result of their  having been used for purposes that neither Rosskam nor Gerstley would have approved.  Bartenders had a tendency when “Old Saratoga” or another whiskey had been dispensed from its fancy bar bottle to refill it with an inferior brand and cheerfully pour it out to customers under false pretenses.  Today bottles behind the bar must be the container in which the liquor was sold, carrying an original label and tax stamps.

That leaves a treasure trove of back-of-the-bar bottles.  They steadily grow older and all of them will have achieved “antique” status by 1920.  No more will be made and I have seen little evidence of fraudulence.  Many can be bought for under $200.  Attractive and displaying well, they are certain to accrue in desirability and value in the future.