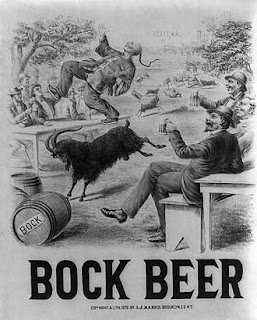 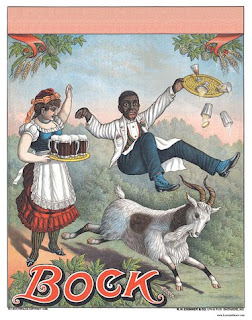 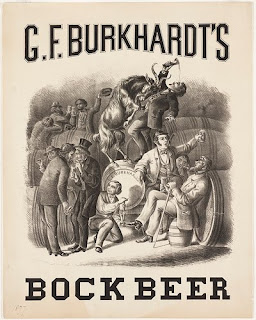 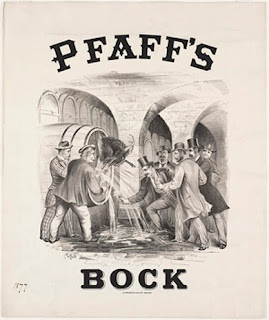 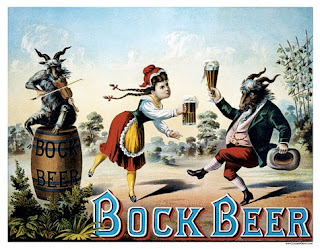 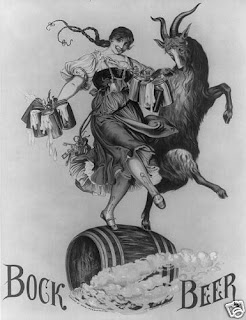 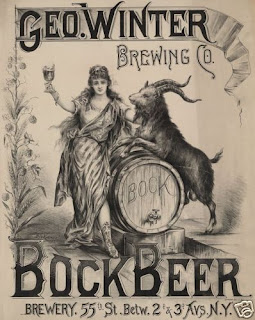 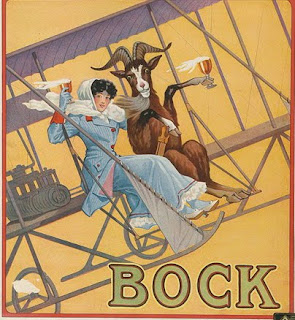 For hundreds of years a particular brew known as “bock beer” has been symbolized by images of a goat. The concept arose in Germany and many theories have been put forward about why this sweet dark beer, usually produced and consumed in the Spring months, might have seized on this particular animal as a icon.

Some say that the word “bock” comes from the medieval German brewing town, Einbeck (pronounced “Ein-bock”). Others claim it comes from the Hindu language. Whatever the origin of the name for this heavy dark lager beer, it has traditionally been advertised as represented by this ruminant. Pictured here are eight goats, all of a pre-Prohibition vintage, as depicted in trade cards and posters advertising bock beer.

Perhaps the most fascinating is an anti-Chinese trade card for bock beer from 1879. It shows a pigtailed Chinese gentleman being bowled over by a long-horned goat as onlookers raise a glass and laugh. In the background goats are chasing other Chinese. There is no any indication of the brewery that issued the card. The design is from a A.J. Mare of Brooklyn NY. Although anti-Chinese feeling was common in the period, it is a mystery to me why this image was believed to sell beer.

In bock ads, however, goats regularly are knocking people down or doing other destructive acts. A white goat knocks over a black waiter spilling his highball and martini glasses while a comely white girl looks on with her tray of beers intact. Again no brewery is advertised. The lithography company cited is from Baltimore. My reading of this image is that during bock season beer is ascendant over mixed drinks.

The rambunctious goat is evident again in a poster for G. F. Burkhart’s Bock Beer. This time he is chest butting a well-tailored gentleman who is attempting to quaff some brew. The man stands amidst beer barrels and a group of 10 celebrants, at least several of whom seem to be inebriated. Note that at rear among the group is gentleman of color waving his hat.

This image dates from 1877 and was the art work of Charles Wellington Reed (1841-1926), an American artist and lithographer famous in his time for his illustrations. Burkhardt’s Ale and Lager Beer Brewery was located in Boston where it made beer in two massive six-story buildings. Founded in 1850, it survived until the coming of Prohibition.

Artist Reed also did a bock illustration for Burhardt’s Boston competitor, H. & J. Pfaff Brewing Co. Its 1877 poster shows a group of men surrounding a beer keg, out of which a goat is charging. Several hold glasses and are trying to catch the spurting suds. Pfaff began his brewery in 1857. He too was put out of business by Prohibition. Today his facility houses the Roxbury, Mass., Community College.

The violent goat may be contrasted with a more genial animal, one often depicted in the company of a pretty girl. An 1882 bock trade card shows a goat dancing with a girl, both of them brandishing beer glasses, while a second goat plays the fiddle. The dance theme is carried forward in a poster of the same vintage that features a pretty waitress, with overflowing tankards in hand, dancing on a beer barrel with a very attentive goat . No brewery is mentioned. This goat conjures up the image of the satyr, the Roman mythical half man/half goat who frequently is seen in erotic juxtaposition with attractive, loosely clad or nude women.

The satyr implication is even more evident in a 1900 bock beer trade card from the George Winter Brewing Company. Here the goat, whose male characteristics are very evident, is gazing longingly at the maiden carrying a goblet of beer. Or is it the beer that excites him? The Winter brewery, as noted on the card, was located on 55th Street in New York City. City directories of the time indicate that Winter himself resided at 42 Avenue A in Manhattan.

The last bock image shown here is a generic bock poster from a Newport, Kentucky, lithography company that could be hung in a bar window. It dates from around 1912. A young woman and goat sitting are on the wing of a airplane, the suds flying off their beer glasses. Because air travel was a novelty, this scene probably was very trendy in the early 20th Century.

To this day the goat continues to be the symbol of bock beer, to be seen on many a current label. For the most part these contemporary animals are relatively docile creatures. For that reason, I much prefer the “old goats” of pre-Prohibition days.
Posted by Jack Sullivan at 1:28 PM No comments:

A Second Look at the Irish 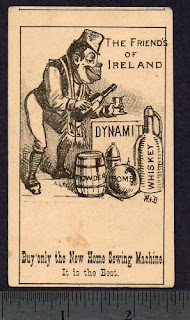 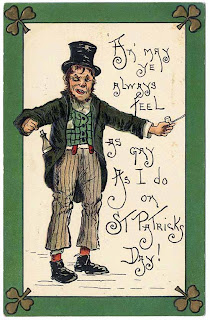 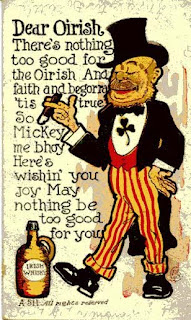 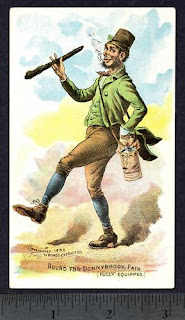 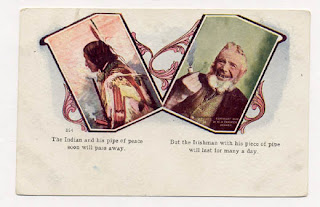 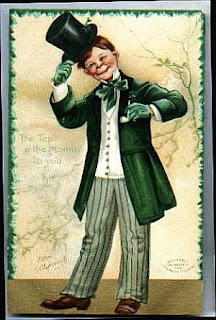 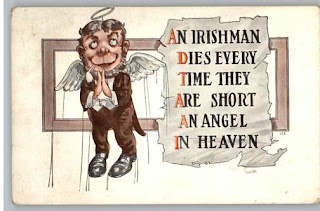 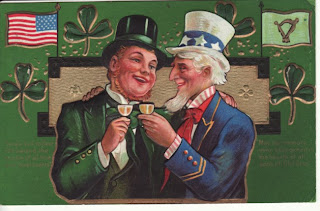 Last year in March my blog was entitled “No Irish Need Apply.” Written as an antidote to the sentimentalism that often attends St. Patrick’s Day, that article featured images of Irish immigrants looking like monkeys, planting explosives, fighting with police, and in general posing a threat to American society.

In this blog I attempt to show the progression that sentiments about the Irish underwent from the late-19th to the early-20th Century. A reminder of the bestial and dangerous Irishman is an 1880s trade card advertising the New Home Sewing Machine Co. It shows a simian-like man pouring a glass of whiskey while tending a range of explosive materials and devices.

The Free Home Co., creator of the card, was founded in 1882 and boasted a New York City address. Acquired by another manufacturer in 1927, products were sold under the Free Home name until 1957. My assumption is that prejudice against Irish was so strong at the time that this image was believed to sell sewing machines.

An early St. Patrick’s Day card echoes the notion of the Irishman as a ruffian and a drunk. Note the bottle sticking from his coat pocket. Although the dynamite and bombs are missing from the portrait this is still a dangerous individual. That it is tied to a St. Patrick’s greeting makes it all the more offensive. Just bit more refined, is a “Dear Oirish” postcard of the same era. Both the monkey look and the whiskey jug are evident.

Pond’s Extract was a patent medicine that claimed to cure everything from influenza and hemorrhages to chilblains and hemorrhoids. With an address at 76 Fifth Avenue in New York, the company issued a trade card in 1892 purporting to show an Irishman “bound for Donnybrook Fair” -- an event in Ireland known for being rough and rowdy. Although his looks have improved, this Paddy still wields a club and carries a flask of booze. He is said to be “fully equipped.”

A second postcard from that same year has more complex message. On once side is an American Indian; on the other a elderly man with a pipe. The legend reads: “The Indian with his pipe of peace will soon pass away; But the Irishman with his piece of pipe will last for many a day.” I have seen other cards with the same rhyme. The message seems to be that neither ethnic group was desirable, but the Irish were now the larger problem.

Even so, the image of the Irishman was changing. A 1907 St. Patrick’s card shows a well-dressed, polite son of Ireland, tipping his hat and calling out, “Top of the mornin’ to you.” This was the work of Ellen Hattie Clapsaddle (1865-1934), an American illustrator/commercial artist in the late 19th and early 20th centuries. One of the most talented and prolific postcard and souvenir illustrators of her time, her cards set a tone for an upscale depiction of the Irish.

Within a few years postcards were depicting Irish in an angelic mode. Gone are the club and the whiskey, although the clay pipe remains in the picture. A 1914 card shows an Irishman on angelic wings who is being carried up to the Pearly Gates. The legend tells us “An Irishman dies every time they are short an Angel in heaven.”

The final card, vintage the 1930s, shows the Irishman as arms-around firm friend of Uncle Sam. Their flags fly together amidst the shamrocks. Drink is back but in a decorous fashion. The two raise a glass to the bond between the two countries and peoples -- a far cry from the image produced by the New Home Sewing Machine Co.
The progression from the monkey-faced, drunken and destructive Irishman took several generations to reach the well-clad, genial one of more recent times. The scary immigrant of old morphed to a staunch American fully in the embrace of our national symbol.

What was responsible for the change? I believe the sheer numbers of Irish-Americans and their relatively rapid rise economically in the United States. In America a few bucks in the pocket can result in an ocean of respect.
Posted by Jack Sullivan at 7:01 AM No comments: