Curing Malaria Without a Clue 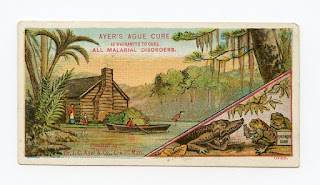 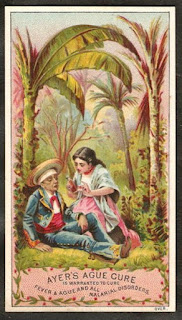 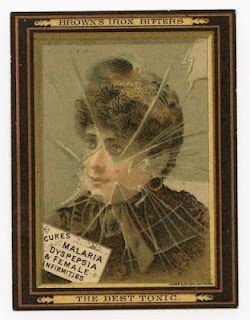 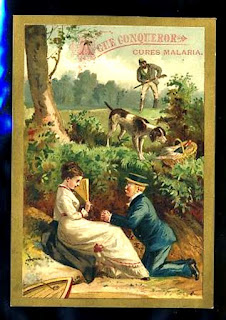 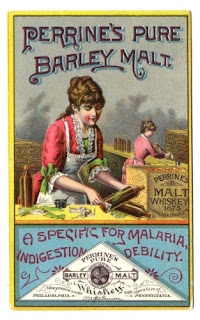 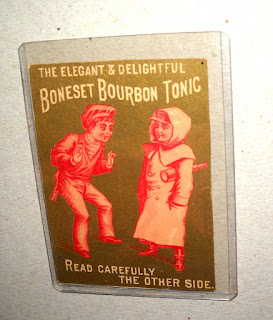 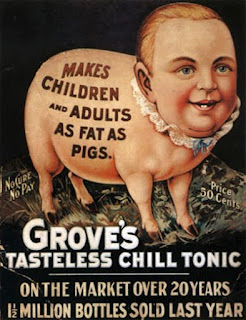 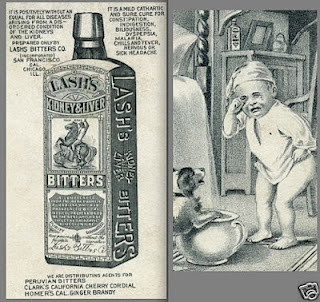 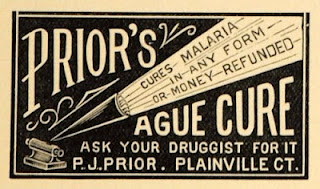 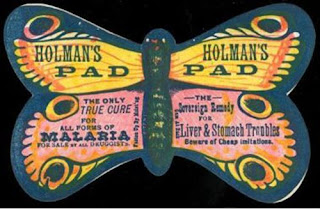 I have a abiding fascination with the quack medicine purveyors and their phony wares of the 19th and early 20th Century before food and drug laws helped to shut many of them down. Of particular interests are the nostrums and accompanying advertisements to cure malaria at a time when no one had a clue to what malaria was, how it was spread, or how to treat it.

Lack of knowledge never inhibited the “medical messiahs,” as one author has called them. In fact, utter ignorance was their friend since the ordained medical profession did not have much of an idea about malaria either. The disease, often called “ague” in an earlier day, is believed to have been in existence for centuries.

It was a familiar plague among Civil War soldiers who often were camped in marshy ground in order to be near sources of water. The mosquitoes that carry the disease were endemic to such locations. Ayers Ague Cure. “warranted to sure all malarial disorders,” took advantage of this identification with swamps in its trade card advertising. The scene is a Louisiana bayou or Florida wetlands. Even an alligator is sick and being fed the ague cure by frogs.

During the U.S. military occupation of Cuba and the construction of the Panama Canal. At the time, malaria and yellow fever were a major cause of death and disease among the workers constructing the canal. Of the more than 26,000 people working on the Canal in 1906, more than 21,000 were hospitalized for malaria. Ayers, a patent medicine firm that made a multimillionaire of its owner, was quick to pick up on the Panama connection, showing a compesino being ministered to by his lady friend. Malaria also was a scourge in other parts of the United States. In the late 1870s the number of cases peaked and victims ran close to a million annually. In some localities malaria was the cause of one death in seven.

Brown’s Iron Bitters was a quack medicine merchandised to mothers with trade cards stressing its value for babies and toddlers. A analysis of Brown’s Iron Bitters in 1883 indicated that it contained cocaine and 39% alcohol, virtually the alcoholic strength of whiskey. The potion also contained phosphorus, calisaya bark and, yes, even some iron: Just the thing for baby. Although Brown’s Iron Bitters sold well, it was not until the proprietor claimed that the medicine also cured malaria that sales soared. Brown declared in his merchandising that his Iron Bitters was “a sure antidote again malarial poison, fever, and ague and other intermittent fevers.”

Using a considerably less dramatic image than Brown to sell his product was G.G. Green.
Green, a Yankee colonel in the Civil War, started a wholesale drug business in Baltimore soon after the conflict, then moved successively to Ohio and New Jersey. It was after he bought the rights to several nostrums that he found his groove. . George created a marketing campaign involving mass mailings of free samples, and the distribution of thousands of his almanacs. His elixirs, including the Ague Conqueror, were found to be mostly derivatives of opium. The Pure Food and Drug Act of 1906 spelled an end to his business and the Ague Conqueror met its demise about 1916.

If opium was a common ingredient in anti-malarial nostrums, so was alcohol. Perrine’s Barley Malt Whiskey, shown touted in a trade card as a “specific” for malaria and other ailments was not the product of a drug outfit, but a Philadelphia whiskey distributor. The Perrines had discovered that in addition to its “Palace Gin,” “Palace Rye,” and other liquor brands, a whiskey nostrum would add significant cash to the till. The picture of a winsome lass filling the orders from the ague-stricken on its trade card was added indication that it was, as advertised, “pure.”

Chambers & Brown of Louisville were also promoting whiskey as a remedy that would fix loss of appetite, bronchitis and malaria, all in the same big gulp. But to the alcohol they added an ingredient called “boneset,” which was just then becoming the darling herb of the quack medicine crowd. It is a common plant that grows in low meadows and damp ground throughout North America, The popular name Boneset is said to have been derived from use of this remedy in the treatment of a particular flu because the pain attending it was commonly called “Break-Bone Fever.” Boneset is reputed to have been a favorite in the pharmacology of Native Americans. They called it by a name equivalent to “ague-weed,” not indicating if it caused or cured the disease. Since Chambers & Brown knew nothing about malaria, why not cure it with an herb about which they also knew nothing?

Edwin Wiley Grove actually put something in his “Grove’s Tasteless Chill Tonic” that would relieve malaria symptoms. Quinine had been known for centuries as alleviating the chills and fever of the disease. Its bitter taste, however, rendered it unpopular. Grove is quoted to have said: “I had a little drug business in Paris, Tennessee, just barely making a living, when I got up a real invention, tasteless quinine. As a poor man and a poor boy, I conceived the idea that whoever could produce a tasteless chill tonic, his fortune was made.” His enterprise was called the Paris Medicine Company and it made him a fortune. Grove’s advertising was a bit startling, however, with a baby’s head superimposed on a pig’s body and the assertion that the tonic makes children and adults “as fat as pigs.”

Lash’s Kidney and Liver bitters also employed a wee tot who is crying over his chamber pot while his puppy looks on. Because this nostrum claims to a sure cure so many ills, including malaria, we can speculated on what is bothering the youngster. Noting that it also is said to be good for constipation, perhaps that is what is on the little one’s mind.

Prior’s Ague Cure made its trade card prop the primitive phonograph of the time, broadcasting the word that it cured malaria “in any form” or money would be refunded. P.J. Prior was a druggist in Plainfield, Connecticut, who advertised his nostrum widely. We can assume that his ague cure was swallowed in some form. The Holman folks would cure your malaria by application of their medicinal pad. It was, they averred, “the only true cure for all forms of malaria.” By the way, it also was a “sovereign remedy” for liver and stomach troubles of undefined origin.

Interestingly enough, the American Medical Association which spent a great deal of time, money and effort in debunking various quackeries, never spent much time on malaria cures. My theory is that the real medical experts of the time had so little knowledge of the disease that they largely refrained from comment. During the 20th Century a great deal of knowledge about malaria was gained and its incidence in the United States virtually was eliminated. Worldwide, however, malaria remains a scourge . While millions of dollars have been spent to find a preventative inoculation, including U.S. government money I myself authorized in the 1970s, a solution continues to be elusive.
Posted by Jack Sullivan at 2:09 PM No comments: 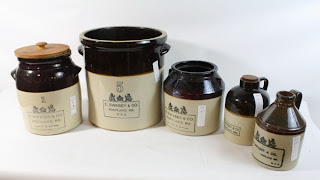 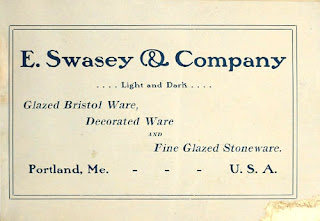 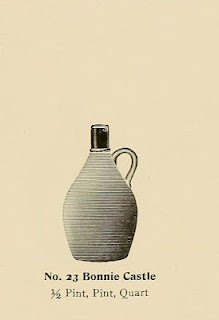 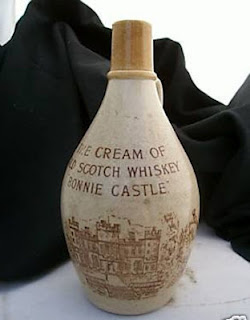 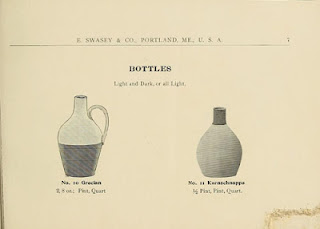 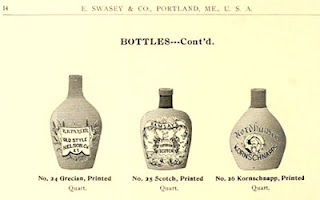 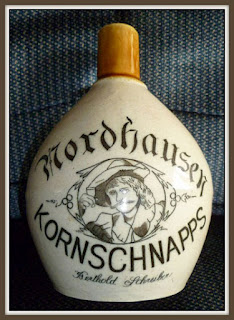 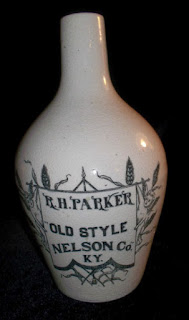 Much of my research over the past thirty years has been devoted to discovering who made America’s pre-Prohibition whiskey jugs, particularly those with “fancy” exteriors. As a result I have been able to identify and write about the attractive ceramics of the Fulper Pottery Company of Flemington, New Jersey; Knowles, Taylor and Knowles of East Liverpool,Ohio, Thuemler Manufacturing of Pittsburgh, and Sherwood Bros. of New Brighton, Pennsylvania.

The identification of Sherwood Bros. was of particular interest because of its ability to design and execute elaborate underglaze transfer labels of quality equal to those of a number of potteries in Great Britain. Now it is clear that there were at least two American potteries with those capabilities -- the second right under my nose.

It was the E. Swasey & Co Pottery of Portland, Maine, a company that once was among the most productive in New England but today is all but forgotten. As the letterhead shown here indicates, the firm was an importer and jobber (selling for other potteries) but also a manufacturer of ceramic items. Despite its size, the company is not mentioned in most pottery books, including Lehner’s presumably comprehensive “Encyclopedia of U.S. Marks.”

Eban Swasey was a potter who apprenticed in Exeter NH in the mid-1800s. In 1875 he and his partner, Rufus Lamson, moved to Portland ME and established the Portland Earthen Ware Manufactory, producing redware. Swasey and Lamson eventually went their separate ways, and in 1890 Swasey established E. Swasey & Co. at 273 Commercial Street in Portland. Shown here is a photo of the pottery circa that time. In 1897, Swasey's youngest son Perley joined the company, which became a sizable enterprise by the turn of the century. Eban died in 1906, but the business carried on until finally sputtering out of business during the Depression.

Swasey became known for the array of pots, crocks, jug and other items that bore the company’s elaborate logo design, best seen on its footwarmer. The elaborate nature of the mark and its prominence on many items has intrigued me but, again, my earlier research yielded nothing about its origin or meaning.

Among the array of Swasey products shown here, I once owned a the pint-sized jug shown at the far right. That is an embarrassing revelation because it never gave me an inkling that Swasey might be behind many of America’s most attractive whiskey jugs. Other writers had portrayed the company as principally importers and jobbers and I had not investigated much further.

My ignorance was revealed in a flash recently when a E. Swasey & Company catalogue was put up for sale on eBay. It advertised “Light and Dark...Glazed Bristol Ware, Decorated Ware and Fine Glazed Stoneware.” As I turned the pages (electronically) there were surprise after surprise. An illustration appeared labeled “Bonnie Castle,” a jug for Scotch that many have felt was U.S. made because of the way “whiskey” was spelled on the label. It is a common bottle but one whose maker had never been identified.

A following page showed a jug that was listed “kornschnapps,” a kind of liquor that was popular among German Americans and often bottled in the U.S. Neither drawing proved conclusively that Swasey designed either the Bonnie Castle or kornschnapps jugs. As a jobber the company simply could have sold the shapes to other outfits for printing. The solution came on a following catalogue page. Displayed there were illustrations of three whiskey quarts with elaborately printed underglaze labels, all of which I have owned at some time in the past. Among them were the drawing of a Nordhausen Kornschnapps jug, not just the shape but the actual design. A photo of the actual jug, a fairly common item, confirms the identification.

There too was the illustration of a “R.H. Parker Old Style” whiskey. This is one of America’s most elaborate and attractive jugs, featuring cherubs, heads of grain and a banner type label. The liquor was produced by N.M. Uri of Nelson County, Kentucky, brother-in-law to the Bernheim Brothers of “Old Harper” fame. Again the catalog picture and the photo coincide. Swasey stands revealed as another American pottery able to produce underglaze transfer printed ceramics of a high quality.

Alan Blakeman, a British expert on whiskey containers, has long contended that several American potteries had the capacity to produce ceramic jugs of a quality rivaling those of more than a dozen Scotch and English manufacturers. Well, Alan, we are now up to two -- and still looking.
Posted by Jack Sullivan at 10:51 AM 8 comments: