Sniffing the Sauce with Nipper’s Clones 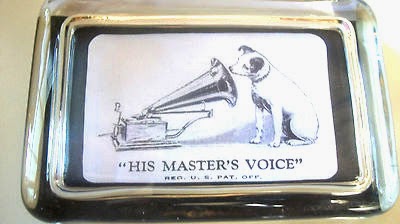 In February 2012 I devoted my a post to the iconic image popularized by the Radio Corporation of America (RCA) showing a small spotted dog, known as “Nipper,” listening to a phonograph with a large megaphone-like speaker.  It is shown above on a glass paperweight.  Created by British artist Francis Barraud in 1899, the picture is usually accompanied by the legend, “His Master’s Voice.”   My earlier post cited a variety of ways in which the image has been used over the years, spoofed in cartoons and in other venues.

Among Nipper “clones” shown before were several dealing with the whiskey trade.  During the ensuing 27 months I have been able to collect a number of examples of dogs sniffing the odor of 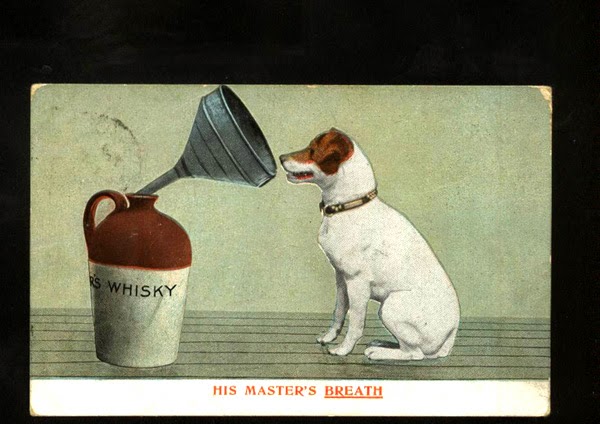 alcohol.  An example is the postcard shown here of a Nipper-like terrier fixed on the scent coming though a funnel protruding from a jug on which is written “WHISKY.”  The caption reads,  “His Master’s Breath.”   Nothing subtle there.

A virtually identical theme is registered in the following image.  Represented on an oil painting is a large shaggy dog who has his nose close to a funnel stuck in a jug that says, “Old Scotch Whiskey.”  Once again the caption is “His Master’s Breath.”  This dog is shown with a bemused look and his red tongue hanging out,  as if it would like a taste of whatever is in the jug. 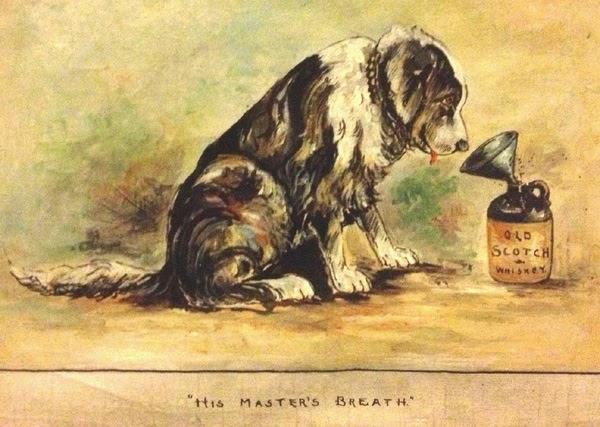 A third portrayal of  “His Master’s Breath” brings a different look to the theme.  This time the canine is sniffing a funnel plunged into a large metal pitcher.  In the background are large barrels with spigots.  Empty bottles are laying on the floor. The clear implication is that this scene is occurring in a distillery.   The venue is a postcard from a man named Harry Heye Tammen, born in Baltimore who

moved to Denver in 1880 and began a business selling a popular line of “Colorado curiosities.”  These included mineral novelties,fossil fish, polished agates, botanical specimens, Pueblo Indian pottery, Tlingit Indian carvings, relics and taxidermy items.  To this litany can be added a line of scenic and humorous postcards, of which the one shown here is an example.  Although Tammen commissioned the art work he played a personal role in choosing subject matter.

The Nipper theme is played out once again in the image of a bulldog seemingly startled by the odors coming out of the funnel tucked in the neck of a wicker-covered jug.  This representation appears on 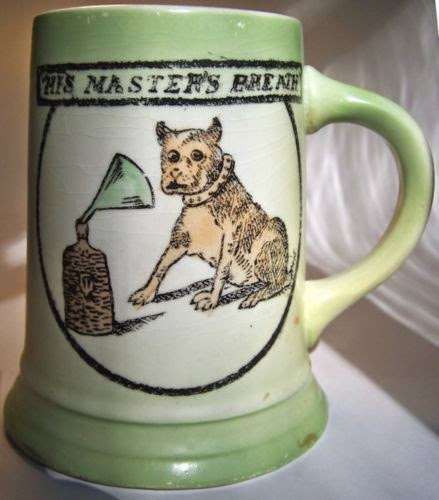 a postcard from the early 1900s as well as on a beer stein.  The latter dates from 1900 and was the creation of the Sterling China Company of Sebring, Ohio.  The pottery firm existed under this name from 1899 to 1903 when it became the Sebring China Company and its products known as “Limoge China.” 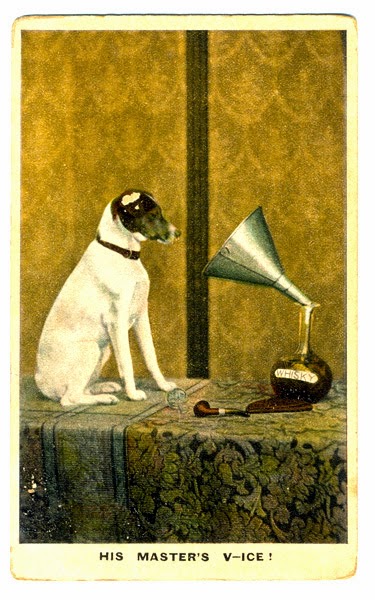 In considering these images, some observers question whether they were carrying a pro-Prohibition message or were meant strictly to be humorous.  It has been noted that such representations ceased with the imposition of National Prohibition in 1920.  A second mode of representing Nipper, shown here, might strengthen the anti-alcohol supposition.  The theme is “His Master’s V_ice.”  Clever elision.   This representation is on a postcard with a Nipper-like dog peering down a funnel on a glass decanter marked “Whiskey.”  A pipe and tobacco pouch like next to it.  Smoking apparently was another of the master’s vices.

If there are questions about whether the images shown above are meant to be pro-Prohibition, there can be no doubt about those shown below.   “Old Tucker Whiskey” was a leading label of the Brown-Foreman Company in the pre-Prohibition era.  This Louisville, Kentucky, outfit was formed by George Brown and George Foreman in 1891 and has survived to the present day.  It 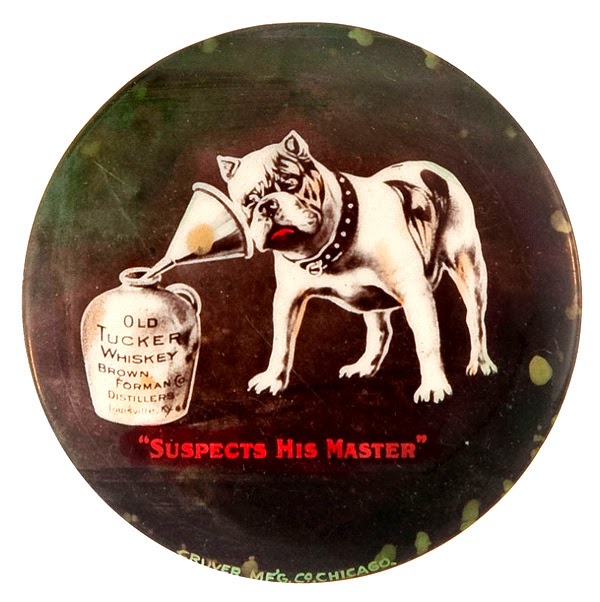 chose the image to merchandise this brand, including on giveaway items it provided to favored customers.  The image appeared on a celluloid and metal pocket mirror.   Here the gramophone has been replaced by a whiskey jug and the horn by a funnel.  This bulldog “Suspects His Master.” The same image, much diminished in its legibility was also etched onto a shot glass.

For the final illustration I have chosen a canine who became every bit as famous as Nipper. He was “Bonzo the Dog.”  He was the creation of artist and cartoonist George Studdy who introduced him in 1922.  He has been described this way: Bonzo the Dog had a lovable vibe and look. He was a white, chubby dog with a droopy face and saggy skin. He had big blue eyes and expressive ears which communicated his feeling to the audience through either film or sketch. He had one black ear and one white, some small black spots on his body, and a short, stubby tail.   In the depiction here,  Bonzo clearly has gotten too close to
“His Master’s Vice,” represented by an empty brandy decanter.  To use the vernacular, Bonzo is blotto. 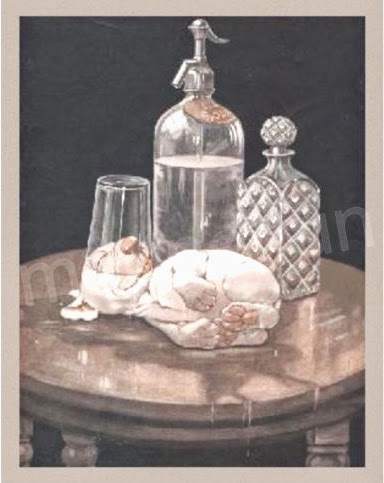 Posted by Jack Sullivan at 7:25 AM No comments: