The Frightful Face of Prohibition 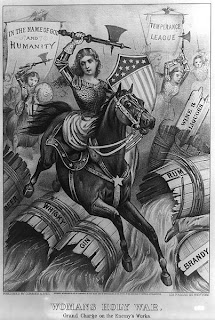 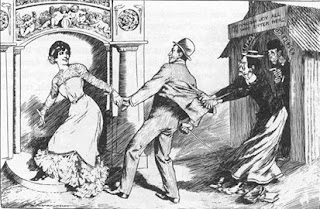 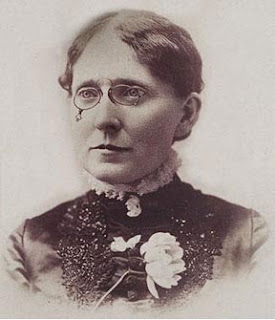 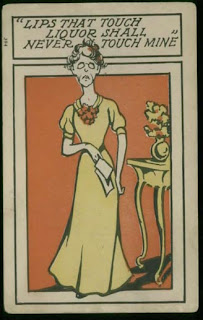 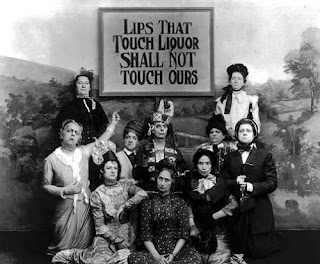 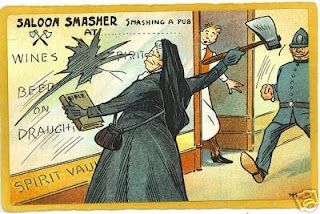 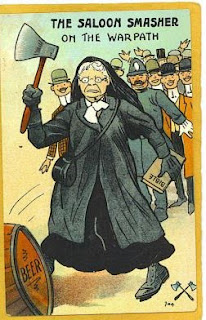 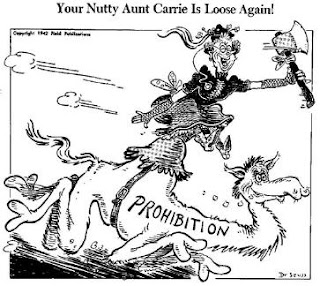 In Hillsboro, a Southwestern Ohio farming town, just before Christmas 1873, 70 women left the Presbyterian Church and marched downtown to saloons and drugstores that sold liquor. They prayed on the sawdust floor or, if barred from entering, outside on the snowy ground. The effects were startling. Owners were seen pouring booze into the gutters. That day, the Women’s Christian Temperance Union (WCTU) was born.

Within 50 days the WCTU Crusade, according to their publicist, “drove the liquor traffic, horse, foot and dragoons, out of 250 towns and villages.” It took another 47 years for liquor to be made illegal throughout the Nation -- a significant victory for the WCTU. As shown here in a cartoon, adherents felt like Joan of Arc, coming to the rescue of the country with battle ax in hand, fighting “Womans Holy War.”

For many males of a drinking persuasion, however, the efforts of Temperance women were depicted less heroically. Another cartoon , entitled “The Struggle,” shows a man being pulled on one side by a comely woman through a fancy archway and tugged on the other by a spinsterish woman in a funny hat. She is urging him toward a wooden shack on which is written, “Abandon Joy All Ye Who Enter Here.” It leaves little doubt which way the gent will be heading.

The public face of the WCTU did little to discourage this sexist view of prohibition. Francis Elizabeth Willard, the president of a women’s college in Evanston, Illinois, left academia in 1879 to become the president of the WCTU. Shown here, her stern visage appeared frequently in the pages of newspapers nationwide as she campaigned vigorously against strong drink.

Willard’s image helped give rise to a series of cartoons and photo mocking the WCTU mantra, “Lips that Touch Liquor Shall Never Touch Mine.” These images often sarcastically juxtaposed the motto with pictures of women who looked as if they had never been in danger of being kissed by drinkers, teetotalers, or anyone else.

When Carry Nation burst upon the scene in 1900, she reinforced male stereotypes about the kind of women carrying the torch for Prohibition (see my posting May 2009). Like Joan of Arc, she brandished a weapon, in this case a hatchet, and traveled the country storming and wrecking barrooms. A series of postcards from that era parodied her actions as those of the “Saloon Smasher.” So identified did Ms. Nation become with the Temperance Movement that the venerable Dr. Seuss himself ridiculed her in 1942, long after her death, in a cartoon satirizing efforts to reestablish the Anti-Drink Crusade.

There is more than immediately meets the eye in this effort to depict anti-alcohol females as unattractive and sometimes violent hags. The WCTU preceded by almost a half century women being given the vote in the United States. Upon taking the reins of the WCTU, Francis Willard had added the cause of Women’s Suffrage to the organization agenda. If females in advocacy roles could be portrayed as highly offensive, some opponents reasoned the images also would discourage efforts at giving women the vote. In the end, Prohibition failed and was repealed. Women, on the other hand, were enfranchised in 1920 -- and the rest is history.
Posted by Jack Sullivan at 5:28 AM No comments: 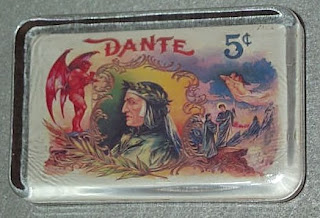 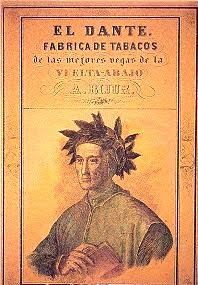 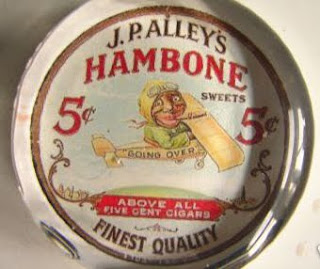 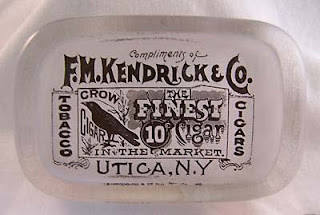 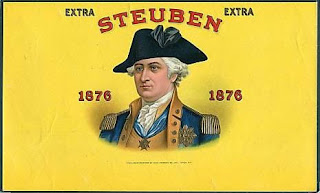 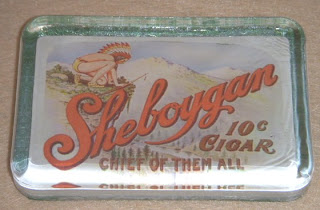 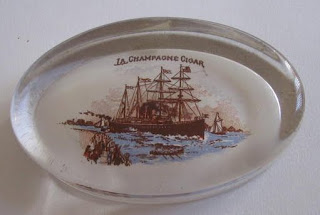 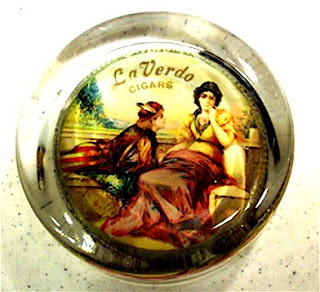 Perhaps it is the mystique of the cigar that renders its merchandising so colorful and flamboyant. For years cigar labels and cigar bands have featured elaborate images often splashed with gold. Glass paperweights advertising cigars are somewhat more restrained, but still worth noting.

One of the most colorful cigar paperweights celebrates the Italian author, Dante
Alighieri and depicts scenes from his greatest work, “The Divine Comedy, a spiritual trip through Hell, Purgatory and finally to Heaven. The original label is said to have been lithographed with 22 separate colors and cost $6,000 in 1900 dollars to create.

Dante Cigars are also credited being the first to market their product with pictorial labels. Shown here is what many believe to be the forerunner of all such labels. Produced in 1857, one of the few extant examples is in the collection of the Library of Congress.

Another cigar paperweight with a back story is J. P. Alley’s “Hambone” Cigar. Hambone was the nickname of Tom Hunley, a streetwise ex-slave. Interviewed late in life by cartoonist James (“J.P”) Alley, Hunley became the model for Alley’s widely syndicated illustrated column called “Hambone’s Meditations,” Begun in 1916, it was followed by two books. In the late 1920s a company was licensed to market cheap cigars under the character’s name and Alley’s illustration. The image on the paper weight is said to be a satire on Lindberg’s 1917 flight across the Atlantic.

A particular favorite of mine is the F. M. Kendrick & Co. “Crow Cigar” weight. Although it is only rendered in black and white, the clever use of a variety of type faces, sometimes called “carnival,” sets it apart. The weight was the product of the H.B. Hardenburg Co., a novelty producer in Utica, New York. Kendrick could also be colorful. Another brand from this company was Steuben Cigars, named for Baron Von Steuben, the German hero of the U.S. revolutionary war, and shown here on a 1909 box with its multi-hued label.

The kneeling Indian, designated “Chief of Them All” was the symbol of the Sheboygan Cigar Company from the town of the same name in Wisconsin. Incorporated about 1898, the firm not only made cigars but also cigar molds and cigar box lumber.

The final two examples eluded my research but are attractive enough to warrant attention. They are J.A. Champagne Cigar, showing a ship under furled sail, and La Verdo Cigars, depicting two lovers.

In short, cigar paperweights can rival cigar labels and bands for their visual appeal and deserve attention from cigar aficionados.
Posted by Jack Sullivan at 11:37 AM No comments: