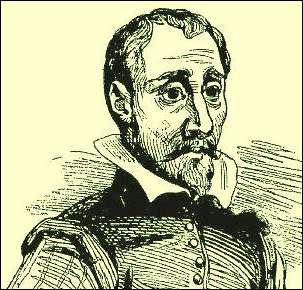 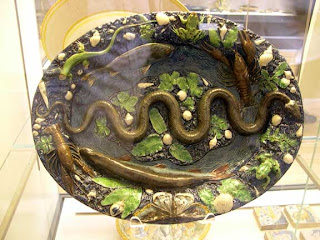 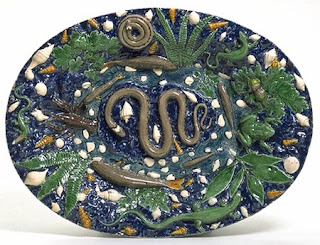 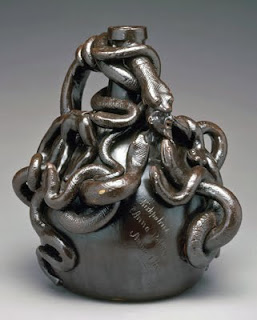 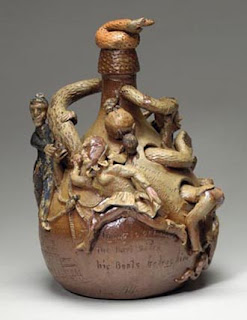 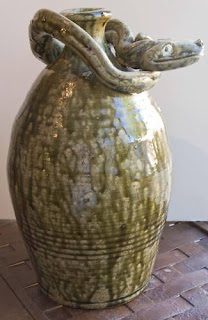 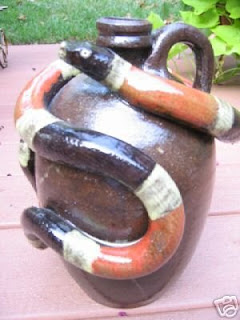 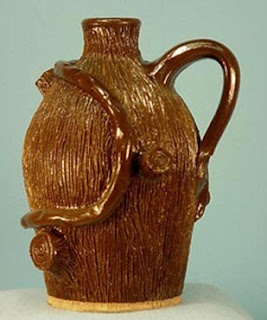 Right now somewhere in the Carolinas, I believe a potter lovingly is molding a snake onto a ceramic jug or pot. Although he assumes a ready sale for this work of his hands, the artist may be unaware that he is following a tradition almost 500 years old. In fact, this year is the 500th anniversary of the birth of the artisan who early conceived the idea of creating snakes in clay.

His name was Bernard Palissy, French, born in 1510. Shown here, Palissy was a early biologist during a period of great interest in the natural world. Also a potter, he made casts of actual specimens of animals and sea life and reproduced the forms on ceramic platters. Rampant on his dishware are fish, frogs, lizards, crayfish, shellfish, and -- most prominent -- snakes.

Palissy’s pottery developed a cult following in Europe and America during the 1800s. Many potters copied his plates and created ceramics in his “rustic” style. Two Americans were among them. In 1859 Cornwall Kirkpatrick (1814-1890) and his brother Wallace (1828-1896) founded the Anna Pottery in the southern Illinois town of Anna. Although their production included a wide range of ceramic items they have become best known for their snake jugs. Two shown here are among several dozen known specimens.

The traditional view of the Anna Pottery snake jugs has been that they were a temperance artifact and a warning against strong drink. More recent interpretations, with which I am in accord, have a different view. They point out grotesque, sexual and scatological aspects of the jugs, their humor and satirical “over the top” style. Moreover, the Kirkpatricks regularly supplied ceramic jugs and other containers for the whiskey trade. The conclusion is that the Anna snake jugs really are an attack on Victorian values and that the brothers were, like their contemporary Mark Twain, misanthropic humanists.

Whatever their motivation, the Kirkpatricks created snake jugs that fetch tens of thousands of dollars in the rare instances when the ceramics come up for sale. They also inspired generations of future potters to create serpent-featuring jugs, right up to our own time. Shown here are three contemporary examples.

The first is the product of W.A. “Bill” Flowers. Flowers, a North Carolina resident, specializes in ash glazes that impart a “tobacco spit” look to his ceramics. His jug shown here features a single large, smiling snake that seems to be guarding the contents of the jug.
The originator of the second ceramic is Marvin Bailey, a folk potter and artist from South Carolina. He works with salt glazes and often uses color to “dress up” his reptiles. His jug appears to bear the replica of a coral snake.

The third contemporary jug shown here is by a Kansas City artist, who signs his work, “W. Painter.” Known particularly for his mini-jugs, Mr. Painter is a student of earlier potters like the Kirkpatricks and tries to recreate their techniques and motifs. He has given his jug a surface approximating tree bark and looped a thin snake around it that eventually becomes its handle.

The tradition Bernard Palissy began a half millennium ago still is being carried on in small ceramic studios throughout America. For a long time to come we can be assured of viewing snakes in clay. Of Palissy himself, after a lengthy career as a favored potter to royalty, an intemperate outburst led to his being thrown into the Bastille. Although the French king offered Palissy freedom if he would recant, he refused and died in a dungeon cell in 1889 at the age of 80.
Posted by Jack Sullivan at 6:54 AM 2 comments: 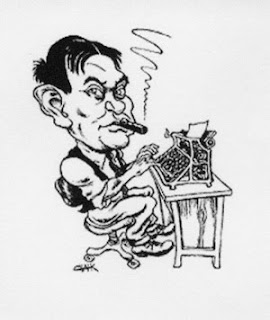 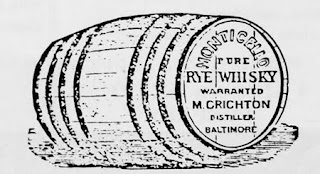 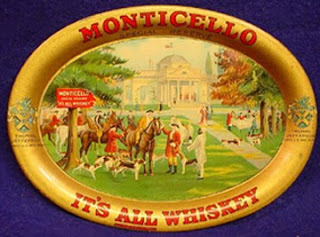 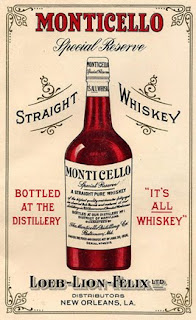 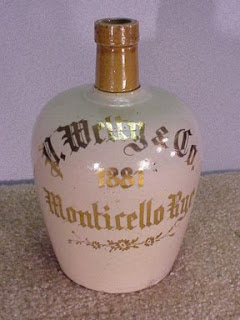 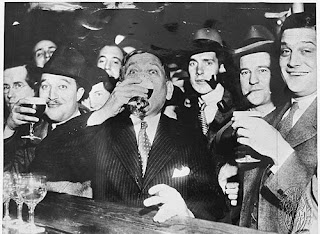 Known widely as the “Sage of Baltimore”, H.L. Mencken was the most influential American commentator of the first third of the 20th Century and a man of strong opinions, pro and con, about almost everything. One of his strongly positive views was of Maryland rye whiskey. Of those, the brand name that most often came first to his mind -- it was his father’s favorite -- was Monticello Rye.

This brand was the original product of Malcolm Crichton, who was born in Illinois, the son of a Scottish-born wholesale grocer, about 1840. Moving to Baltimore, Crichton took over a defunct distillery, rebuilt the facility and began producing a whiskey he called “Monticello Rye.”
The 1880s was one of rapid growth as Monticello Rye rapidly became a popular national brand. Under the slogan, “Its All Whiskey,” ads trumpeted the purity and medicinal value of Crichton’s rye whiskey. Distributors like Loeb-Lion-Felix in New Orleans and Peter Welty in West Virginia featured the brand.”

Mencken contended that a friend “always ate rye bread instead of wheat because rye was the bone and sinew of Maryland whiskey -- the most healthful appetizer yet discovered by man.” This was clear to the Mencken family physician, Dr. Z. K. Wylie. According to Mencken, the good doctor “believed and taught that a shot of Maryland whiskey was the best preventive of pneumonia in the R months.” Mencken’s father Augustus, a cigar manufacturer, was entirely convinced. Moreover, when the senior Mencken sent out for whiskey, he wanted Monticello Pure Rye. His famous son recounted:

“His...bill file shows that on December 27, 1893, he paid Courtney, Fairall & Company, then the favorite fancy grocery fancy grocers of Baltimore, $4 dollars for a gallon of Monticello whiskey...Before every meal, including breakfast, he ducked into the cupboard in the dining-room and poured out a substantial hooker of rye, and when he emerged he was always sucking in a great whiff of air to cool off his tonsils. He regarded this appetizer as necessary to his well-being. He said it was the best medicine he had ever found for toning up the stomach.”

When Malcolm Crichton died in 1890, it appears that none of his four sons were interested or equipped to take on the business. By 1892 M. Crichton & Co. had disappeared from Baltimore city directories. But as often was the case with popular brands, the Monticello name lived on. Thomas G. Carroll & Sons of Baltimore (1872-1919) added “Monticello Whiskey” to its own brands. By 1903 the rye brand was being produced by a new Baltimore-based firm called The Monticello Distilling Co.

Baltimore distilling came to a screeching halt with the coming of Prohibition in 1920. Mencken abhorred it. “The chief argument against Prohibition is that it doesn’t prohibit” he commented. “This is also the chief argument in favor of it.” The author personally responded to the “Great Experiment” by selling his car and using the proceeds to purchase a large stock of “the best wines and liquors I could find.” We can guess Monticello rye was among them. Mencken stored them in a basement vault in his home whose door bore a custom-painted sign emblazoned with a skull and crossbones. The sign said: “This vault is protected by a device releasing chorine gas under 200 pound pressure. Enter at your own risk.”

No one celebrated the end of Prohibition with more gusto than Mencken. A photograph on the front page of the Baltimore Sun showed him downing the first beer to be poured at Baltimore’s Rennert’s Hotel bar in 13 years. “Pretty good. Not bad at all,” the paper quoted him saying. But he complained about paying higher prices for liquor after Repeal. Now, he contended, Monticello Rye cost $3 to $3.50 a quart -- not the $4 a gallon his father had paid.

After Repeal, the brand survived, at least into the 1940’s, the vintage of the Monticello mini-bottle shown here. In 1967, after the deaths of Mencken and his brother left their Hollins Street house empty, Baltimore citizens interested in turning it into a museum found in the cellar numerous full bottles of whiskey and wine, as well as a few empties. There is no written record to reveal if Monticello Rye was among them, but we may be excused for believing so.
Posted by Jack Sullivan at 4:41 PM 1 comment: