William Wallace Denslow (1856-1915) , usually cited as W.W. Denslow, was the American artist whoachieved fame and fortune as the illustrator of the book, The Wonderful Wizard of Oz. As shown here, Denslow was as a large man with a walrus mustache. His contemporaries noted his eccentric view of life, and a foghorn for a voice. Born in Philadelphia, Denslow was largely self-taught as an artist. When he was barely twenty-one, in 1877 he agreed to illustrate a book called Historical Sketch of Franklin County, PA. Denslow traveled the length and breadth of the county, making sketches of the most important landmarks. 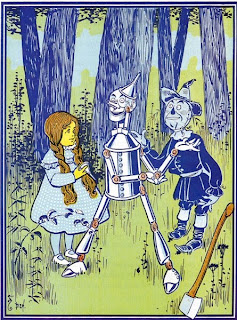 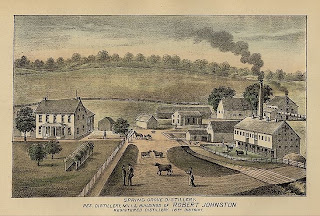 Two drawings, shown here (double click for larger view), deserve special attention because they depict in detail the farm distilleries that characterized the whiskey industry of the East in that era. As Denslow’s pictures vividly portray, these were substantial facilities, ones that combined farming with the production of whiskey from local grains.

Spring Grove Distillery, in Franklin County, Pennsylvania, was the property of Robert Johnston (1825-1902) whose father before him was a distiller. He work for other local whiskey-makers until 1844 when he rented a facility. He worked at it until 1866 when he bought the farm distillery shown here. He ran it very successfully until he died. Then his son George took over and made the Spring Grove brand into a regional favorite. 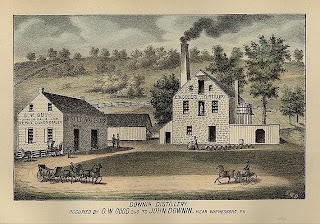 John Downin, whose distillery Denslow also sketched, came from less fortunate circumstance than Johnston. A memorial after his death said he was “...a poor boy when he started out in life, but through hard work, industry and thrift, became a man of substance." Downin had been dead two years and his distillery in the hands of O.W. Good when the artist made the picture. 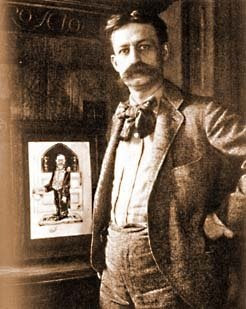 Denslow, ever a wanderer, gravitated to Chicago about 1893 where he met L. Frank Baum, a journalist and author. Together they collaborated on writing and illustrating The Wonderful Wizard of Oz and the myriad Oz books that followed. Shown here is a Denslow drawing of Dorothy, the Scarecrow and the Tin Man. The stories brought riches to both men. Quarreling with Baum over royalty shares in 1902, the artist struck out on his own, creating an 18-volume Denslow Picture Book series (1903-1904) and a syndicated newspaper comic strip.

His revenues were sufficient to allow him to purchase an island off the coast of Bermuda. He moved there and crowned himself King Denslow I. It was an unhappy head that wore the crown, however. He ultimately drank his money away and died in obscurity of pneumonia in 1915. Denslow’s legacy lives on in the Oz books. In addition, his 1877 drawings in the Historical Sketch of Franklin County, including the Spring Grove and Downin distilleries, are currently for sale online.
Posted by Jack Sullivan at 4:28 PM 3 comments: 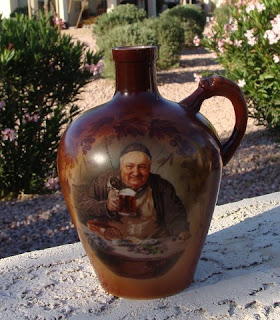 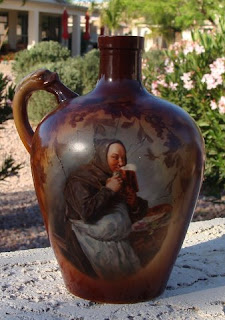 Sometimes traditions merge to form an artifact whose provence and purpose can be hard to understand. Among such items is a whiskey jug that is decorated by from top to bottom usually dominated by shades of brown and featuring a monk quaffing a beer. The motif has a distinctly German look. Indeed, similar items are found in antique stores and auction sites with German pottery marks.

Recently, however, two such jugs have come to light that bear the mark of the Knowles, Taylor and
Knowles pottery that flourished in East Liverpool, Ohio, during the late 1800s and early 1900s. They produced a distinctive style of porcelain jug, used by a number of distillers for their whiskey. It features a snake handle and a “KT&K” mark on the base.
In order to decorate its whiskey jugs, the KT&K firm used a transfer printing process that first had been developed in England years earlier for mass producing an image on a porcelain or other hard ceramic surface.

In addition, KT&K frequently sold its jugs completely blank. Between 1870 and 1920, thousands of American women took up the art of decorating porcelain tablewares and other household objects with hand-painted overglaze. An entire industry sprang up to support this trend. KT&K obliged with its china jugs and hundreds of hand-painted examples are known. 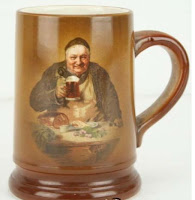 The two monk jug shown here, however, are not hand painted and appear to have been decorated by a transfer process. In addition, the images are identical to those on beer steins made for the Paul Wuestoff Co., a brewery operating in Pittsburgh from about 1901 until 1916. Those steins bear the mark of the Theumler Co., a Pittsburgh firm run by Hugo Theumler, a immigrant who had learned his craft in Germany. His firm specialized in mass producing decorations on glass and ceramic items up until 1908 when he died. Theumler-marked beer mugs and steins are found throughout the East and Midwest. 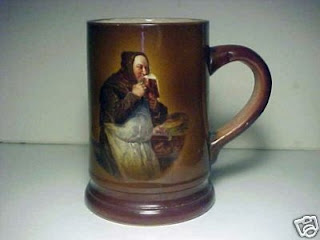 blanks from regional potteries. We are thus led to the conclusion that this firm created the monk jugs using stock bought from KT&K and applying its own transfers of imbibing monks. Since the jugs served only decorative purposes, however, it is not clear who ultimately was responsible for their merchandising. It is, however, possible to date them as more than 100 years old and thus eligible for status as antiques.

Note: The pictures of the monk jugs are courtesy of John DeGrafft.

Posted by Jack Sullivan at 12:29 PM No comments: