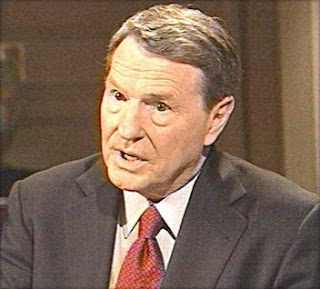 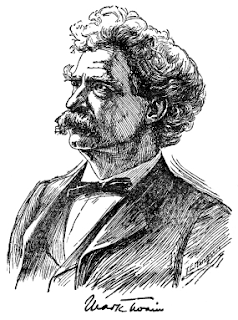 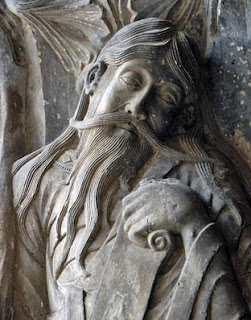 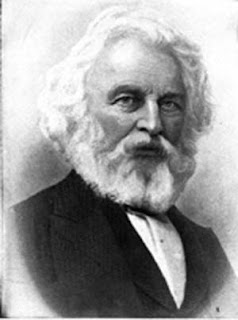 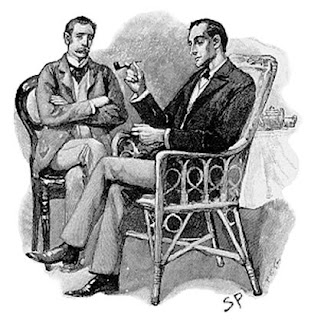 Newsman Jim Lehrer, himself a world class collector of bus signs and memorabilia, once said that there are important people and organizations working to preserve the “big things of life” like buildings and battlefields. It is left to the rest of us, Lehrer said, to preserve the other things.

But we would be kidding ourselves if we pretend that research and preservation are the only reasons for collecting. Lehrer himself has characterized the thrill of the “The Find,” the rush a collector gets when at last encountering that most highly sought item.

Scientists have studied the phenomenon and some concluded that the drive to collect comes from deep in the human psyche and may be almost as old as homo sapiens himself. Says Anthropologist David Given, “This focus on artifacts is a deep principle, and something that separate us from all other primates. Certain parts of our brain have specific areas that resonate to the features of human-designed products. We can’t get enough of them. It’s almost a compulsion.”

Throughout the ages pottery has had a special attraction for collectors. I am among them. In his book, A Tramp Abroad, American author Mark Twain announced himself as a “bric-a-brac” collector with a yen for ceramics. He said: “I am proud to know that I lose my reason as immediately in the presence of a rare jug with an illustrious mark on the bottom of it as if I had just emptied that jug.”

As Twain implies, there is something very primal about pottery. In the Old Testament Bible, for example, the potter’s art was extolled. Jeremiah, shown here in a medieval statute, in Verse 18: 1-8, was directed by the Lord to visit a potter: The Prophet, shown here in a statue, recounted his experience: “So I went down to the potter’s house; and there he was, working at the wheel. And whenever the vessel he was making came out wrong, as happens with the clay handled by potters, he would start afresh and work it into another vessel, as potters do.” A valuable lesson in pragmatism.

Writing in a more contemporary period the American poet Henry Wadsworth Longfellow, shown here, expressed this image of the potter creating from the earth: “No handicraftman’s art can to our art compare; we potters make our pots of what we potters are.” Or as it has been put more humorously: “If it be ashes to ashes and dust to dust; please, potter, handle my kin gently if you must.”

Speaking personally, the jug shape itself is highly attractive. I like to handle the items in my collection, to feel the texture of their surfaces and their roundness. It has been speculated that ceramic vessels that bulge at the bottom and constrict at the top as jugs do subconsciously signify shelter, self-sufficiency and “amplitude.” This may be just a fancier way of expressing the verse that appears on an American mini-jug:

“Nearer brown jug to me,
“ My lips pressed to thee,
“Even though thou art but clay,
“Close by thee I’ll stay.”

Still life artist Dennis J. Grafe once explained why he preferred to paint and draw jugs rather than landscapes. He explained that his purpose was to make his viewers throw off casual observation of their surroundings and really become aware of the distinct qualities of objects. “In the case of a jug,” Mr. Grafe said, “the viewer is exposed several qualities of this object which make it unique....shape, color, texture or weight.” In this view the pleasure derived is appreciating the individuality and authenticity of an item.

Whatever an individual collects, whether of interest to me or not, I respect the impulse and pride behind the effort. While a particularly fine example of a jug may not be comparable to owning a Rembrandt painting of one, we collectors can be encouraged by the words of the famous detective Sherlock Holmes in one of Sir Arthur Conan Doyle stories. Holmes tells his friend, Dr. Watson: “To the man who loves art for its own sake, it is frequently in its least important and lowliest manifestations that the keenest pleasure is to be derived.” To which I would add: “Elementary my dear Watson.”
Posted by Jack Sullivan at 4:05 PM No comments: 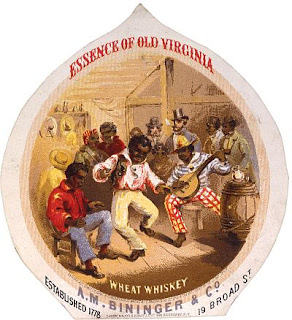 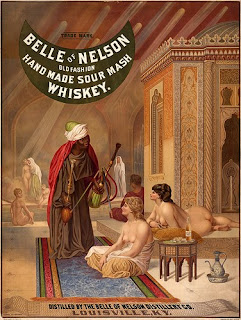 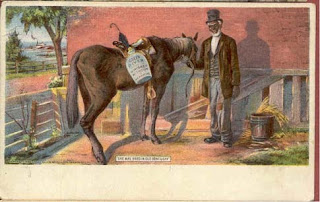 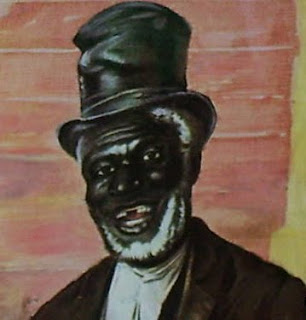 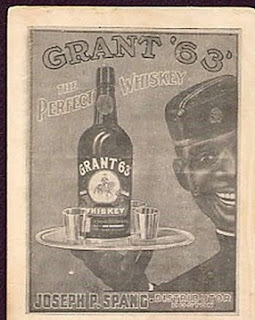 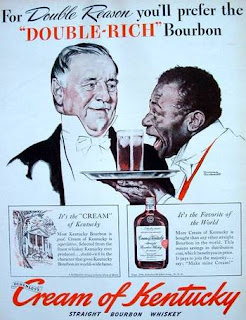 The depiction of African-Americans in whiskey merchandising over the past 150 years has reflected societal changes. The trade card “Essence of Old Virginia,” for example, has been dated from 1859, on the eve of the Civil War. It advertises “Wheat Whiskey” of the A.M. Bininger Co. of New York City. The obvious message conveyed is how happy Southern slaves are playing music and dancing for their white masters. The ad surely was scorned by Abolitionists.

The much reproduced Belle of Nelson Whiskey advertisement shows a black female slave serving the nude ladies of a Middle Eastern harem. According to the Library of Congress where an original resides, this image dates from 1883, not long after the end of Reconstruction in the former Confederacy. With the future of African-Americans much debated in both South and North, it likely was safer to depict blacks -- and nude women -- in an exotic setting.

In 1900 the Green River Distillery of Owenboro, Kentucky, began using the image of a grizzled black man leading a donkey with a jug of whiskey and an umbrella strapped to the saddle. The image reflected the idea of the faithful, submissive Negro in the South that had come to be accepted as a national myth. Note the details of his face.

The inspiration for this image purportedly was a story told to the distillery founder, John McCulloch, a Kentuckian who had opposed slavery. According to the tale, a lengthy rain storm disrupted liquor supplies arriving at local tavern and it had run dry. Suddenly an African gentleman,braving the gale, appeared in town to deliver Green River Whiskey aboard his mule. Suddenly the rain stopped and a rainbow appeared. The thirsty crowd cheered and celebrated for days. Green River used the image in dozens of ways over the years.

As blacks moved North, generally to fill menial positions, their depiction in service roles such as waiters, porters, or bellhops were common. Note the ad for “Grant ‘63” whiskey from the Spang Distillery of Boston. This image appeared on an ink blotter issued about 1910. There may be some irony as well in the whiskey being named for General Ulysses S. Grant, who defeated the Confederacy and ended slavery in the South.

Extending from 1920 until 1934 National Prohibition meant no whiskey ads. With Repeal, surviving distilleries were quick to resume merchandising. The industry feared that during the hiatus consumers had forgotten how to make and mix drinks. Many distilleries in 1934 and 1935 issued “recipe” books, often with histories attached. One featured Irvin S. Cobb, a nationally syndicated newspaper columnist who had been a leader in the fight against Prohibition. Cobb, whose reputation and career soon would fall because of his racist views, was featured in a booklet from Frankfurt Distillery and its Paul Jones brand. Among illustrations was one that stereotyped blacks happily mixing drinks for white “gentlemen.” Clearly this was meant to invoke nostalgia for the “Good Old Days” of the pre-bellum South.

The theme of African-Americans as servants of affluent whites carried over into the next decade as exemplified by a Norman Rockwell-drawn 1940’s ad for Cream of Kentucky Bourbon. This brand had used black servants in its ads at least since 1911 and Rockwell obliged with an image that was only fractionally better than the Frankfurt Distillery’s. The waiter clearly is cast in an “Amos and Andy” mode.

The prize for the most racist whiskey ad of them all, however, must go to the Brown-Foreman Distillers of Louisville, Kentucky. Depicted on its 1940’s match cover ad for “Old Polk” brand whiskey is an African-American straight out of a minstrel show. He has thick lips, big feet and a loud wardrobe. This insensitivity when viewed from a 21st Century perspective seems almost unbelievable. Interesting too, distillery advertising of Old Polk Whiskey before Prohibition featured the likeness of former President James K. Polk.

Today when African-Americans are depicted in whiskey ads, of course, the images are entirely different. They are shown enjoying drinks with friends, often with whites present or in family situations. The Nation, including American distillers, has come a long way in the 150 years since Bininger’s dancing colored boy, but obviously it hasn’t been an easy road.